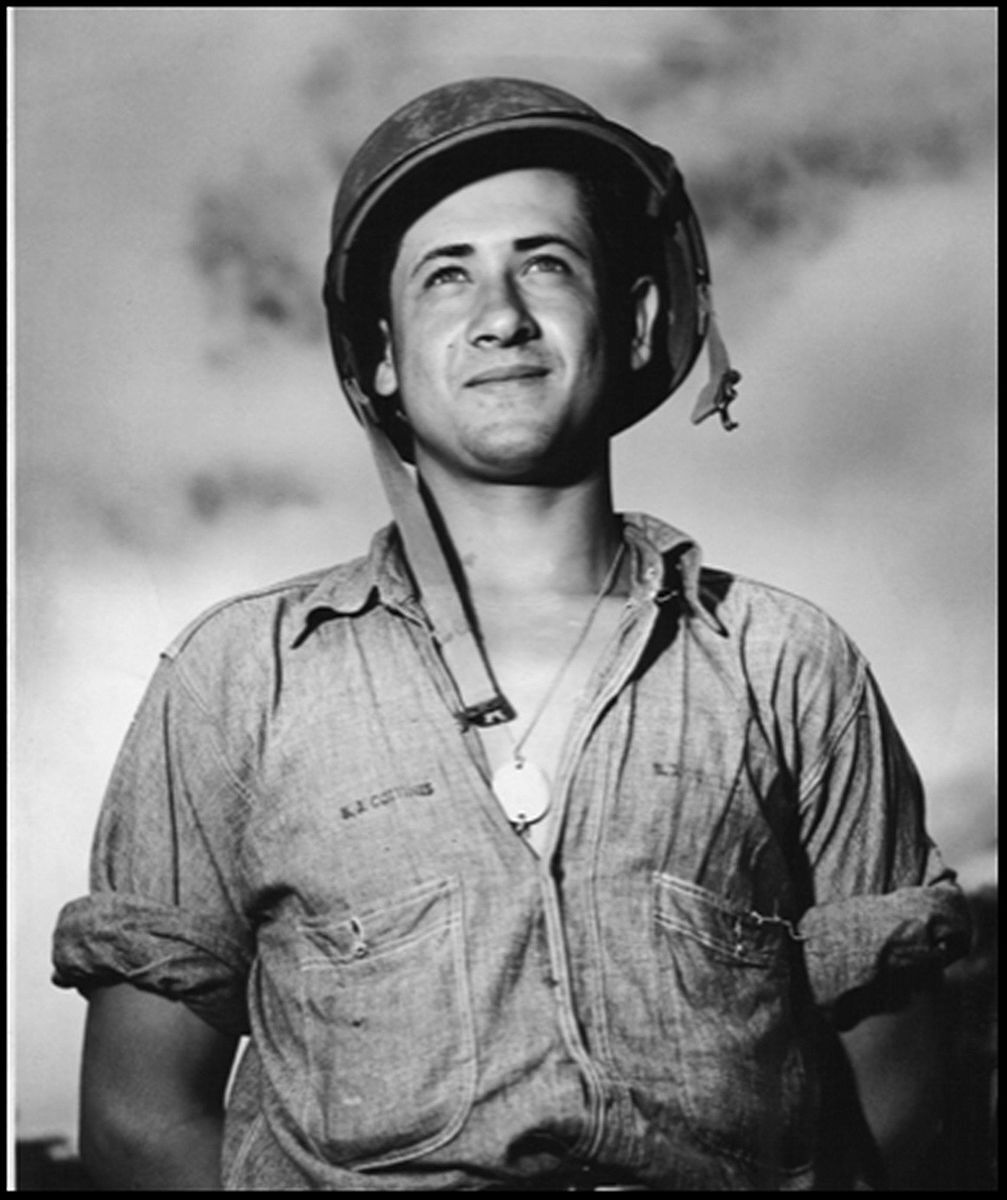 Benjamin Cortines poses for a U.S. Coast Guard recruitment photo after the invasion of the Marshall Islands. 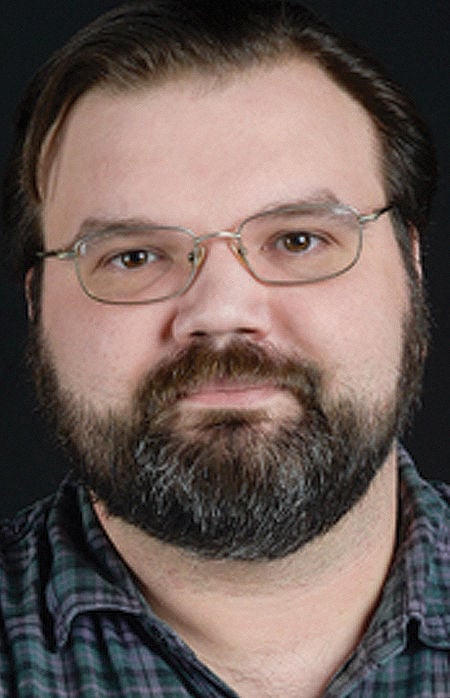 The stories of two Nacogdoches County veterans — one has a tenuous tie, but he’s supposedly buried here — epitomize the meaning of Veterans Day.

When our nation was in great need, Benjamin Cortines and James M. Mitchell were whisked away from their families, served our county halfway around the world and then were suddenly thrust back into civilian life, expected to carry on as if nothing happened.

Their lives can teach us lessons and bring us inspiration, but above all else they force us to ask, “How did they do it?”

Both these brave men departed this world long ago, so they can’t answer for themselves. This Veterans Day, I’ll be thinking about them and the countless men and women like them.

Cortines, who grew up in Moral, lived though one of the deadliest days for the United States Coast Guard during the invasion of the Philippines.

He was aboard the USS Callaway when it came under heavy kamikaze attack in January 1945. The ship caught fire. Men burned to death. Dozens were killed. Even more were wounded.

So the Callaway broke formation. The guardsmen buried the dead at sea, including the ship’s captain. The next morning the men of the Callaway were fearlessly manning transport boats headed to the beaches of Luzon.

That’s the kind of men they were. They had a job to do, and the fate of the world depended on them.

During World War I, Mitchell’s job was much different but just as important. As a Black man, he was a member of the 804th Pioneer Infantry, the type of unit where white officers ordered Blacks and Native Americans to perform dangerous and often demeaning tasks.

During the final days of battle along the Western Front, Mitchell was a frontline combat engineer near Lorraine, France. Men of the 804th were repeatedly gassed. Some were killed.

He fought on, and after the guns fell silent Nov. 11, 1918, the Black men stayed to clean up the mess while most of their white counterparts packed up and went home. They recovered bodies, cleared ammunition depots and disposed of massive containers of poisonous gas.

The French showed deep gratitude toward the 804th and other Black regiments. How did the officers react? They order the Black men to avoid any interactions with white women.

People at home and abroad tried to define Mitchell by his race. I’m sure there were some who felt the same about Cortines, but that is not as evident.

Cortines was Hispanic — his military paperwork refers to him as Spanish American — so despite the fact that he served in America’s last segregated war, he was considered white.

He posed for a Coast Guard recruitment photo after the invasion of the Marshall Islands, standing proud, an embodiment of patriotism. That’s something no one would ever ask of Mitchell. Black troops weren’t even allowed to participate in the World War I victory parade though the streets of Paris.

Mitchell undoubtedly led a hard life. He was born in Tennessee on Christmas Day 1890, the son of a sawmill worker. At at early age, he followed in his father’s footsteps and went to work stacking lumber. They lived all over the South — anywhere Blacks were performing arduous manual labor.

By the time he enlisted in the Army in 1918, Mitchell was working for Pine Belt Lumber Company in Fort Towson, Oklahoma, a place where logging became big business the moment men arrived with axes, saws, wagons and teams of mules.

Cortines’ life was no walk in the park either. He was born in 1925 to Jodie and Annie Cortines. His father died a few months before his birth, leaving the 42-year-old Annie to raise the child with the help of a large Catholic family. Jodie was the second husband to die before her, and she already had nine children.

Census records show that, at least for a time, Cortines and his mother lived with Alfred and Vera Rodrigues, fellow members of Immaculate Conception Catholic Church.

At 18, Cortines signed up for the Coast Guard and trained in Florida before shipping out to the Pacific.

Most people forget the crucial role of the Coast Guard during World War II. Remember “Into the Jaws of Death,” the iconic photo of troops wading ashore from a small landing craft on D-Day? That was a U.S. Coast Guard boat. That’s the type of work the men aboard the Callaway did as soldiers and Marines island hopped across the Pacific.

I can’t be sure that Cortines was on the crew of a landing craft, but the uniform he’s wearing in that recruitment photo suggests so. Such work was incredibly dangerous and gruesome.

Men frequently were killed while stepping from the boat. Some, bogged down in heavy gear, drowned. The Callaway dropped off men on Leyte, Luzon and Iwo Jima — some of the most brutal battles in the Pacific.

Those same small boats were used to evacuate the wounded, and when the Callaway wasn’t bringing soldiers into combat, it was taking casualties to Pearl Harbor for medical treatment. How many times must Cortines have watched the Callaway’s chaplain, a Catholic priest, administer the last rites to the dying?

While Mitchell didn’t spend nearly as long in combat as Cortines, the sights he saw were just as gruesome, if not more so, as he and others loaded wagons with the dead scattered across the French countryside.

After the war, Mitchell went back to work in the sawmill. There were no programs for reentering civilian life. There was no Veterans Administration or guaranteed health care. No federal money to go to school. No groups to share his experiences with. He went right back to work because that’s what men did in 1919.

I doubt he ever talked about the war with anyone who wasn’t there. They couldn’t understand. How could they? Would it even matter to him now that he was fighting a different kind of war at home?

Mitchell died in 1957 at age 66. He has a grave maker in Greenwood Cemetery No. 2 in Garrison, the city’s Black cemetery in which men and women were segregated in death just as they were in life. There’s some doubt as to whether he’s actually buried there.

Cortines came home to a much different world than Mitchell. Sure the economy was booming and rationing was over, but the changes were even more significant. This America was brimming with opportunities absent in Mitchell’s day.

World War I veterans formed the American Legion in 1919 and tirelessly lobbied for better treatment of veterans. While Cortines was still in the Pacific, Congress passed the G.I. Bill, which allowed him the opportunity to get an education if he wanted.

By 1951, Cortines was going to school. His whole life was ahead of him. On Jan. 7 that year, he was mortally injured in a car crash on Spanish Bluff Road near where he grew up. He clung to life at Memorial Hospital for four days until he died. Cortines was 25. He’s buried in Immaculate Conception Cemetery. Three years later, his mother was buried beside him.

These two men lived extraordinary lives in unusual times. When the world needed them, they were there. They stepped up, did their part and came home to a world unlike our own, a world they probably barely recognized. Men like Cortines and Mitchell have done this since the beginning of time, and I’m grateful for them every day.