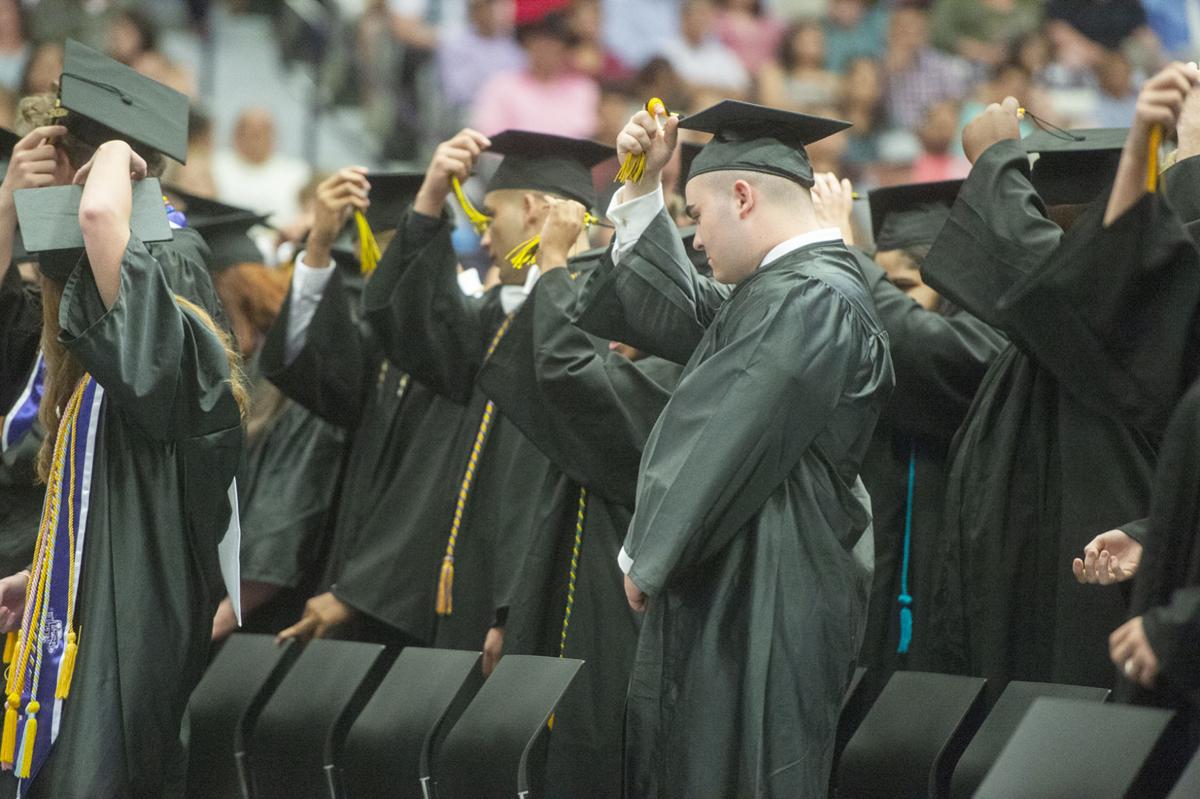 Nacogdoches High School graduates flip their tassels from left to right during the May 2019 commencement at SFA’s William R. Johnson Coliseum. NISD is planning for a hybrid graduation ceremony this year, drawing the ire of some parents and students. 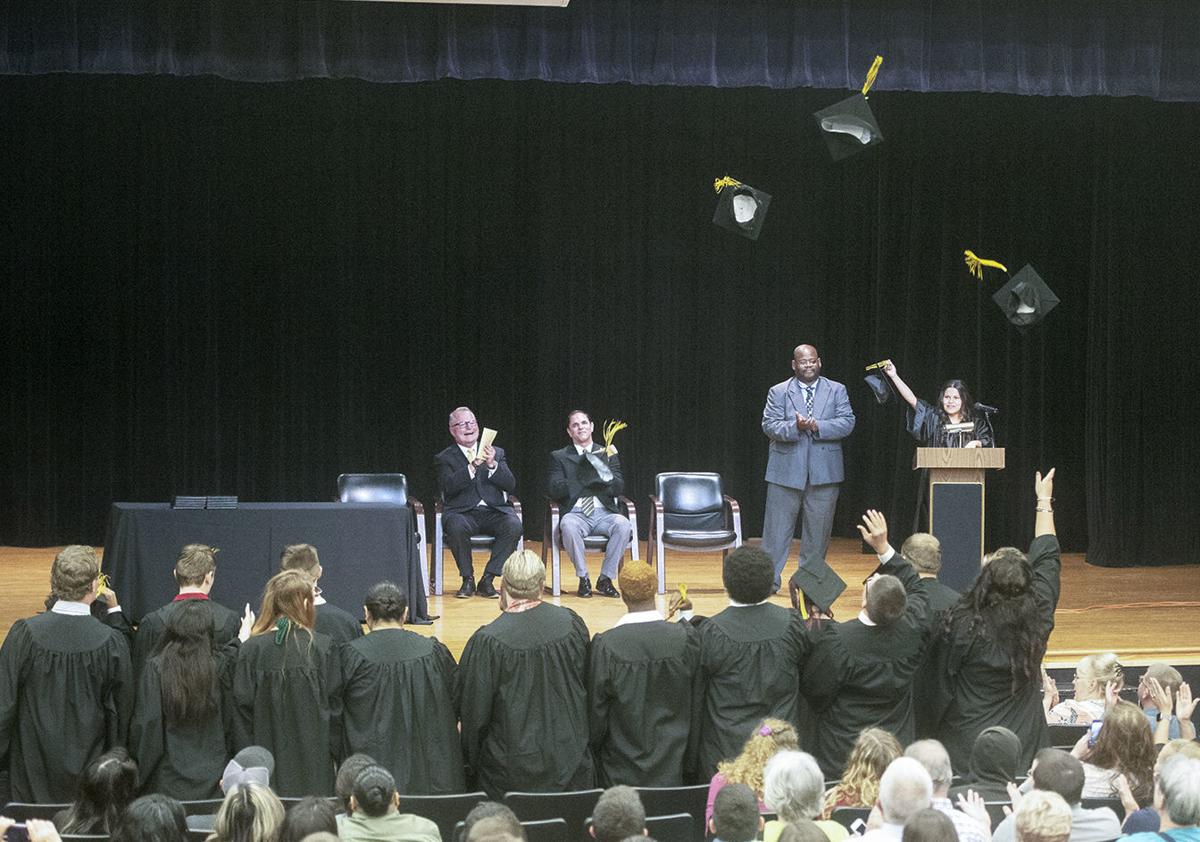 Members of the Malcolm Rector Techinal High School Class of 2019 toss their caps in the air at the end of their ceremony last year. 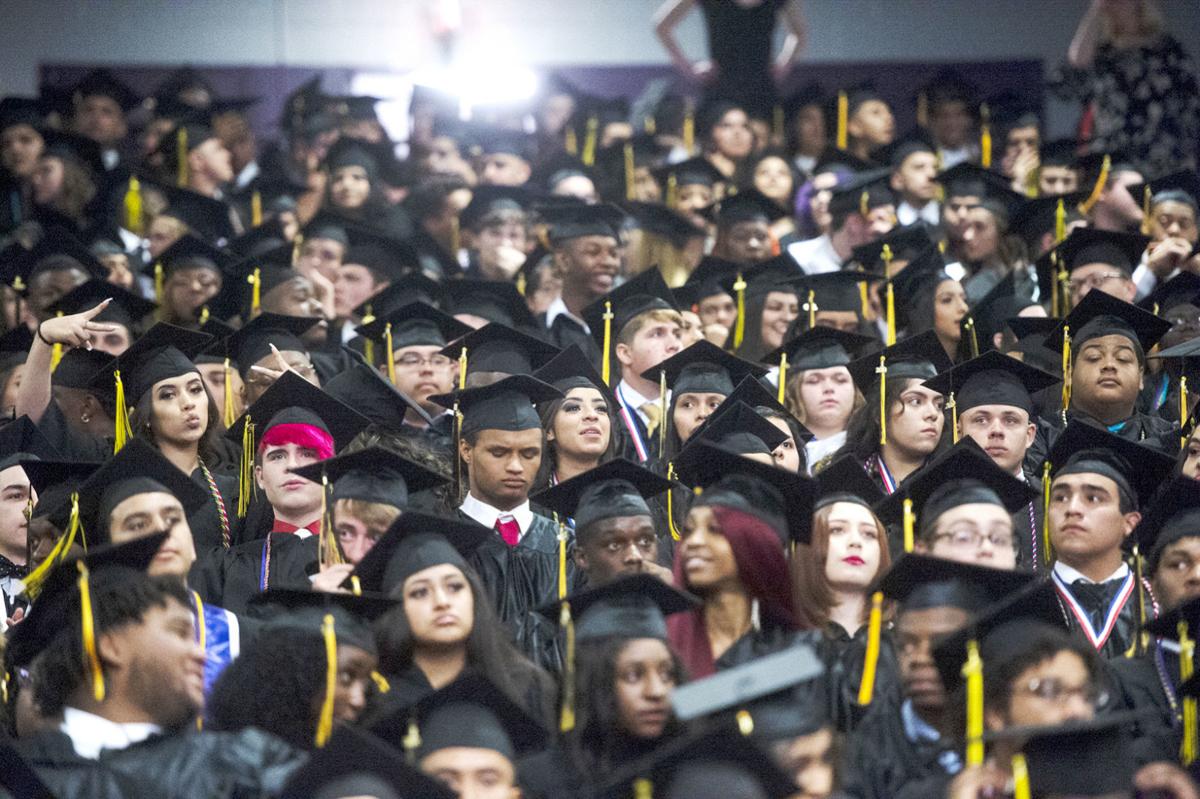 Nacogdoches High School graduates flip their tassels from left to right during the May 2019 commencement at SFA’s William R. Johnson Coliseum. NISD is planning for a hybrid graduation ceremony this year, drawing the ire of some parents and students.

Members of the Malcolm Rector Techinal High School Class of 2019 toss their caps in the air at the end of their ceremony last year.

Parents and graduating seniors at Nacogdoches ISD are calling on the district to rescind its decision to hold a hybrid high school graduation and have a socially-distanced single ceremony.

District officials announced on Tuesday plans to have small ceremonies for each graduate over a four-day period that would be broadcast online later, leaving some parents and students feeling “cheated” out of the traditional pomp and circumstance surrounding the end of high school.

“I’m so mad I could spit nails,” said Sarah Aguliar, whose son, Jose will graduate from Nacogdoches High School this year. “The school district has cheated not only our children but the parents and the families and the chance to graduate with their class and friends of 2020.”

Despite an outpouring of calls for changes to the hybrid graduation, NISD Superintendent Gabriel Trujillo released a video Friday saying a traditional graduation “is now out of the question.”

“NISD must acknowledge the fact that Nacogdoches County has been stricken more so than others in East Texas with the coronavirus,” he said.

Aguilar called the message in the video “just a bunch of … nonsense.”

Still, parents and students are hopeful for a reversal after an online petition started by a NHS senior gained traction.

“Let these babies have this,” said Katie Watson, whose daughter Makayla is also a member of the class of 2020.

The online petition was created by NHS senior Kealy Hathaway. In the text of the petition, Hathaway says seniors were polled on two options including the hybrid ceremony.

“The other option was to set two possible dates for a more traditional ceremony, one in June and one in July, which would be followed by the streamlined approach if neither of these dates were successful,” Hathaway wrote in the petition.

“This would give time to survey the severity of the coronavirus situation directly surrounding these dates while also offering more chances at a traditional graduation.”

The coronavirus pandemic, which shifted schools around the state to distance learning in mid-March, has been difficult for students, Watson said

“It has been hectic. So to be able to graduate, this is what we were looking forward to. Now this has happened. This is hurtful to her,” she said of her daughter. “These seniors, they lost their senior year. They lost prom, Project Graduation, Senior Sunset. They’ve lost quite a bit.”

NISD closed all campuses for the remainder of the academic year at the order of Gov. Greg Abbott.

“It would be unsafe for students to gather in schools for the foreseeable future,” Abbott said in announcing the closings.

But last week, Abbott and Texas Education Agency head Mike Morath gave the go-ahead for schools to hold either hybrid or outdoor graduations.

The education commissioner did not make a public recommendation as to which types of ceremonies certain districts should hold but stressed the importance of celebrating graduates.

“Education as an endeavor for high school students is something they’ve spent 13 years of their lives on with educators pouring love and skill into them over the course of their education career. It is important that we honor that achievement as they begin to make a transition to the next phase in life,” he said.

NISD had considered a traditional graduation, but Trujillo said, district officials didn’t think they could maintain social distancing in Dragon Stadium and its parking lot with around 1,000 people attending a ceremony.

“NISD has an obligation in our community to protect the health and well being of the students as well as their families and district staff. I’m proud of the efforts made to devise and implement this hybrid plan,” he said.

That’s left some parents wondering why graduation couldn’t be held at a larger venue.

“Why can’t the kid’s graduate on the SFA football field? Everyone could still practice social distancing what’s the problem with that?” Aguilar asked.

Watson is also concerned about graduation ceremonies taking place over several days during times when many parents aren’t available.

“There’s ways around it instead of having these hybrid graduation during the day time when people have to get back to work or need to work and can’t afford to take time off to get their senior to walk,” she said.

She’s hoping for one large graduation that is also live streamed and could help reduce the in-person crowd. Parents and students who don’t want to attend a large graduation ceremony should be accommodated with a hybrid program, she said.

Regardless, she and her daughter will attend a ceremony.

“It’s going to be really difficult,” she said of going to a hybrid graduation, “just for a student to walk into an auditorium, take a diploma case off the stage.”

Longview ISD did individual graduation ceremonies for those that didn't want to wait until mid June. It was actually really special. Individual attention to each grad. Family got to be on the track as they walked the field. Parents got to hand the diploma to the student. It was really nice and really special. AND they could invited as many people as they wanted.