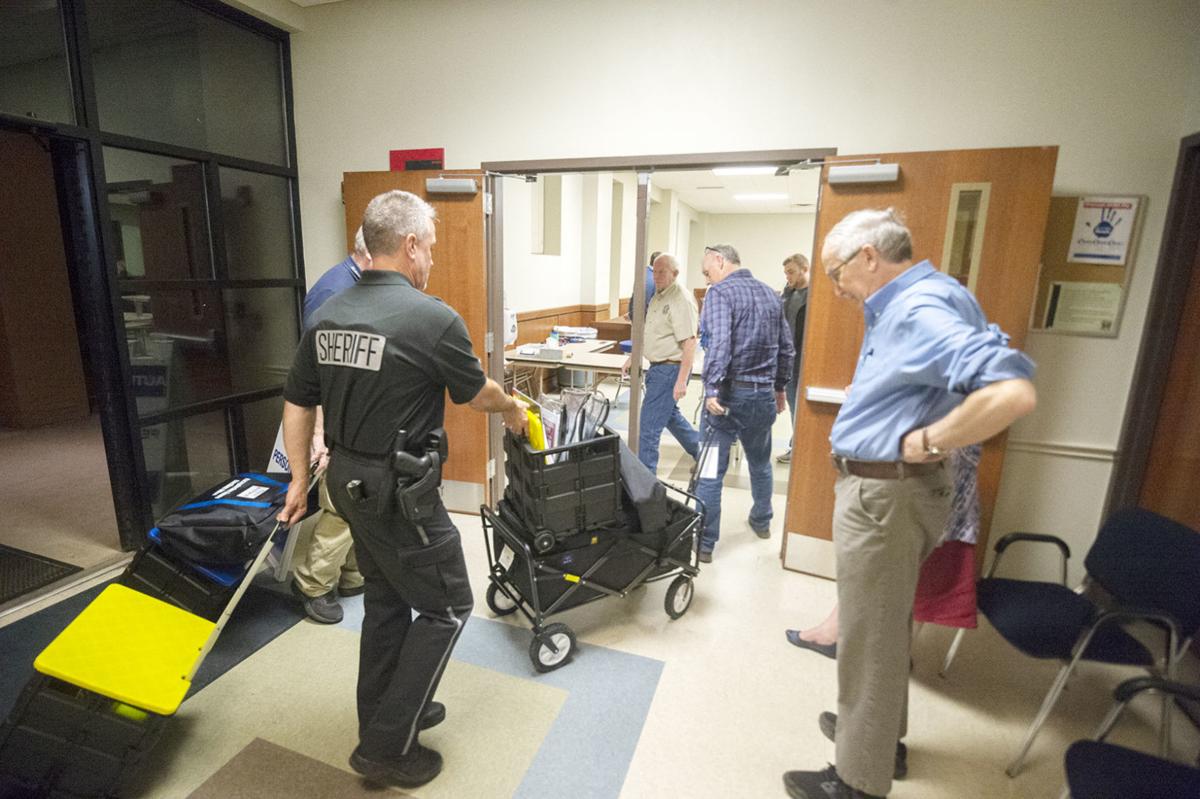 County election workers haul voting materials and ballot boxes into the courthouse annex in March. More early voting locations are among coronavirus precautions that could be implemented for the November elections, if enough poll workers can be found.

More early voting locations are among coronavirus precautions that could be implemented for the November elections, if enough poll workers can be found.

“This is a time when it’s hard to get workers, so we’ll just have to see how many people come forward,” local Elections Administrator Todd Stallings told county commissioners, who on June 16 accepted a $54,000 grant created to safeguard voters during the pandemic.

Part of the federal coronavirus relief package, the grant funding enables the Elections Office to spread out voters among more early voting locations, Stallings said, but more poll workers must be recruited.

Temporary branch early voting locations, including one in walking distance of SFA, were added in 2018 based on geography. The following fall, the state via HB 1888 banned polling locations that weren’t open eight hours a day for the entirety of early voting, something Stallings felt would be too expensive for the county.

But with the grant money, he says, it is “something that we could possibly do now.”

“Of course it would take a lot of people to run all of these polling places, so the number of people willing to commit for two weeks would be a factor in how many we might be able to open,” he said.

Delayed due to coronavirus, local elections originally scheduled for May — including a local option liquor election in Appleby and a number of school board and city races — will also be held in November.

A recent push to allow all Texas voters to cast ballots by mail during the coronavirus pandemic fizzled after turning into a political tug of war in the court system. But even so, Stallings says his office is seeing an increase in mail ballot requests among those who do qualify. The grant funds also pay for supplies and personnel to process mail ballots, he said.

Anyone who cast a Democratic ballot in March or did not participate in the primary is eligible to vote in the election.

The runoff date is July 14, with polling locations open around the county.

Congratulations on getting the grant! Our election administrator, Mr. Todd Stallings is nothing short of awesome in the way he thinks of everything, is pro-active and totally committed to enabling voters to exercise their citizenship through voting. The last few months he quickly shifted gears to "elections in the time of pandemic" and has researched, analyzed, applied for funds, and is setting up for elections that will be safe for everyone to participate in. We are lucky to have him.