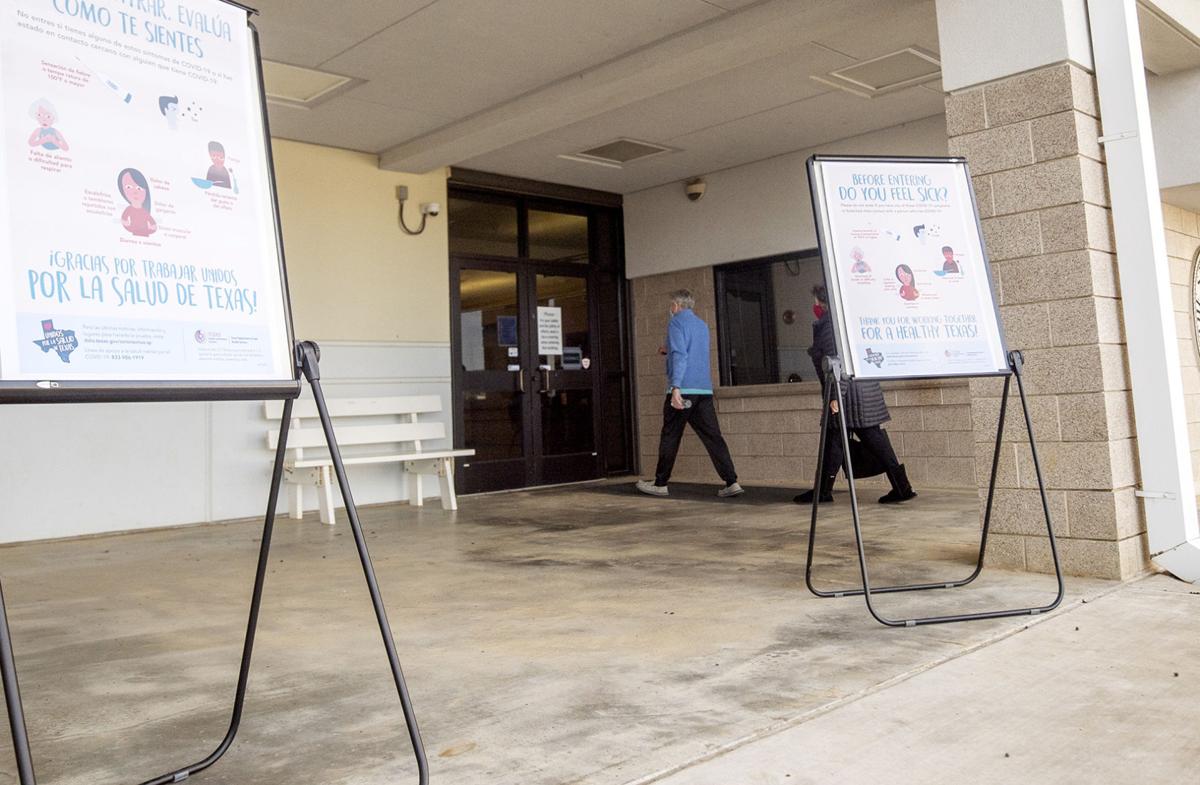 Residents head into the Nacogdoches County Exposition Center Thursday morning to receive doses of the COVID-19 vaccine. Doses of the vaccine were administered during the event to qualified, pre-chosen individuals. 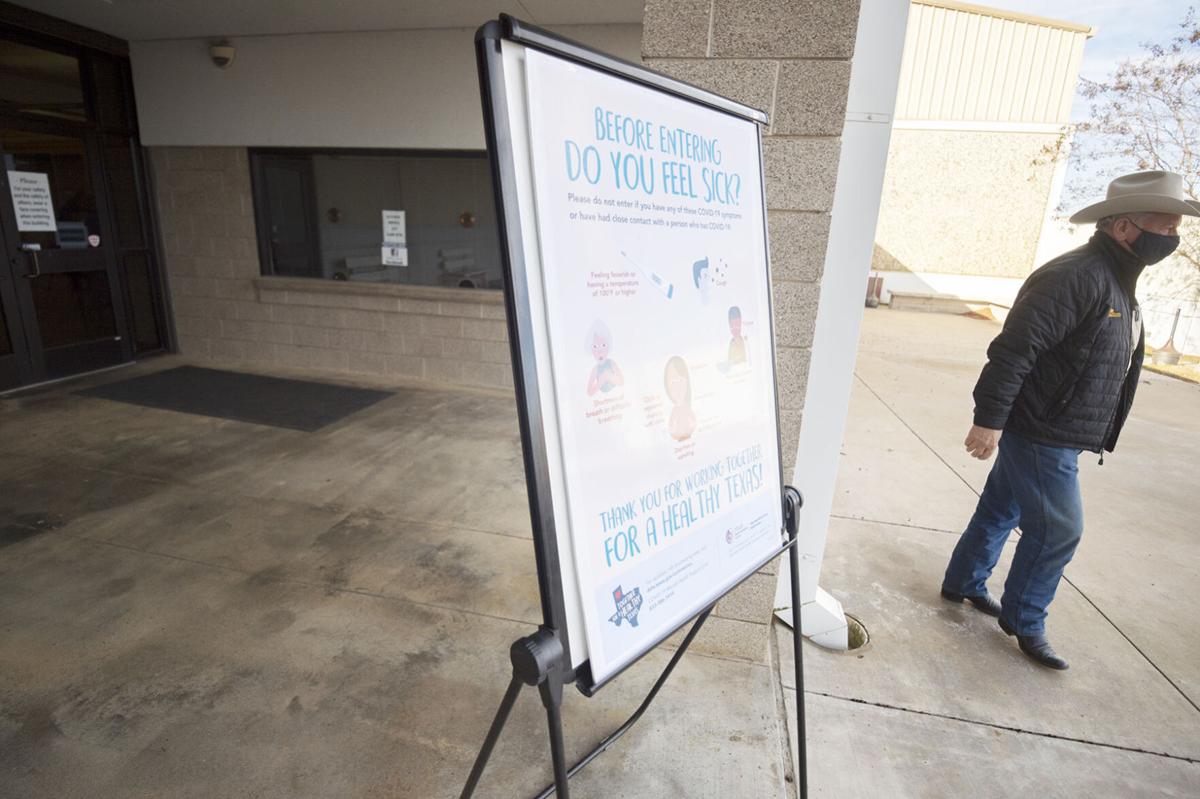 A man walks past a sign outside the Nacogdoches County Exposition Center Thursday morning advising people not to enter the building if they’re experiencing COVID-19 symptoms. Doses of the vaccine were distributed during a clinic Thursday. 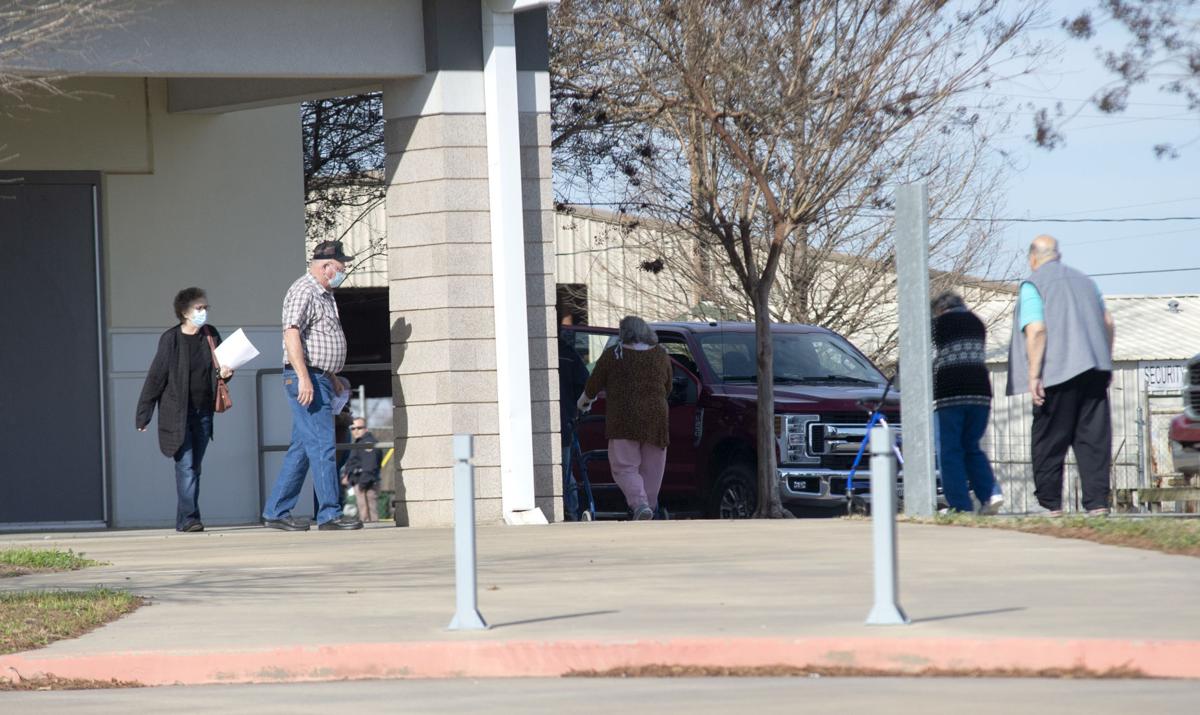 Local residents stream into and out of the Nacogdoches County Expo Center Thursday morning as part of a COVID-19 vaccination clinic. 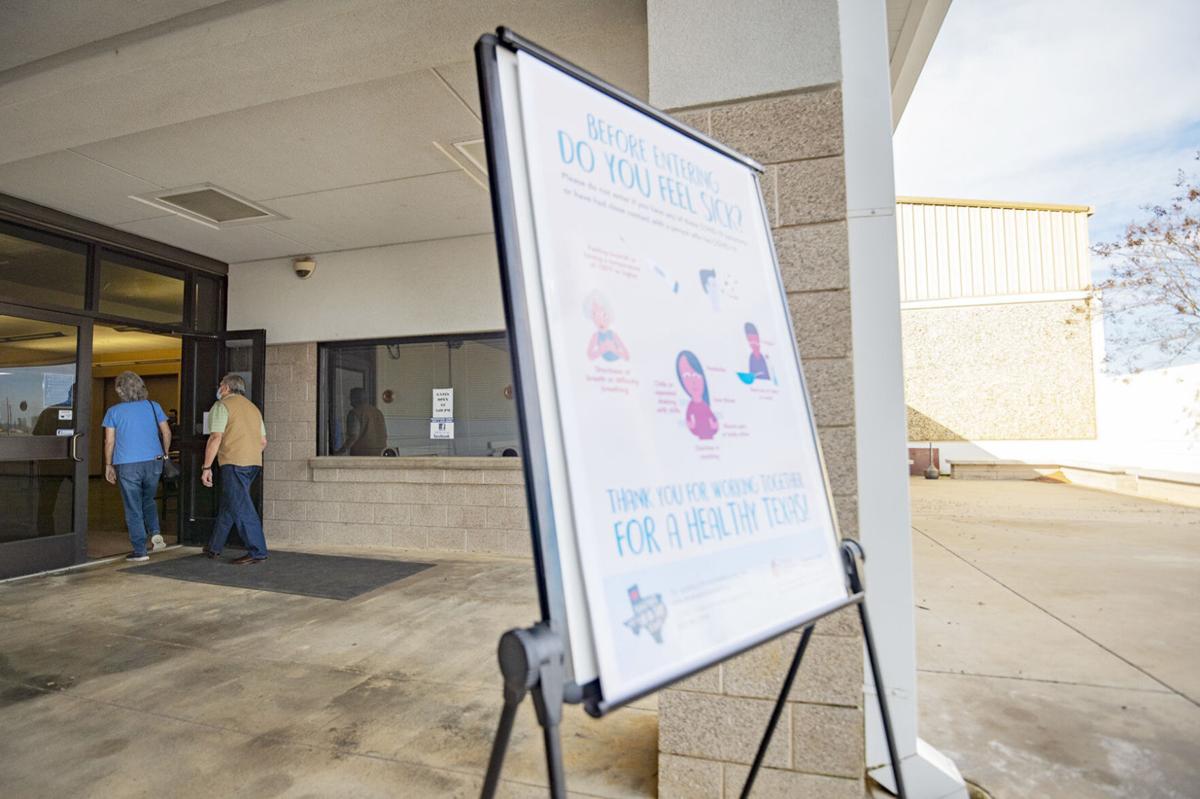 Residents head into the Nacogdoches County Exposition Center Thursday morning to receive doses of the COVID-19 vaccine. Doses of the vaccine were administered during the event to qualified, pre-chosen individuals.

A man walks past a sign outside the Nacogdoches County Exposition Center Thursday morning advising people not to enter the building if they’re experiencing COVID-19 symptoms. Doses of the vaccine were distributed during a clinic Thursday.

Local residents stream into and out of the Nacogdoches County Expo Center Thursday morning as part of a COVID-19 vaccination clinic.

Local officials have twice now quickly thrown together massive shot clinics to distribute vaccines for the coronavirus to around 1,500 Nacogdoches County residents, and more are in the works as allocations of the highly sought after shots continue to trickle in from the state.

The goal is to be able to administer up to 2,000 doses a day, said Nacogdoches Fire Chief Keith Kiplinger who is overseeing the planning for the local roll-out, during an address to Rotary Club of Nacgodoches this week.

“This is a pretty big logistical challenge for a kid from Carrollton, Texas, who wanted to be a firefighter when he grew up,” Kiplinger said.

The effort has been a massive undertaking of cooperation among local governments, the Texas Department of State Health Service, private cooperations and Stephen F. Austin State University.

During the first full week of January, the city, county and SFA nursing students worked together to give 450 doses of the Moderna vaccine which had been allocated for the two Brookshire Brothers pharmacies in Nacogdoches.

“Each of them has one pharmacist a day. They were able to administer 10 doses per grocery store per day out of 700. That meant it was going to take 35 days to put those doses in arms at the rate they were going,” Kiplinger said.

Within a day of approval by Brookshire Brothers corporate, the local coalition was administering vaccines. SFA nursing students gave shots. Librarians and NEDCO employees checked in patients. Deputies provided security. Firefighters and paramedics monitored the newly inoculated for side effects.

Thursday, they did it again after the state delivered 1,000 more doses, and if the supply lines hold, they’ll be doing shot clinics again and again until a significant number of local residents have received the vaccine.

Not everyone will take the vaccine. Some object to vaccines, others are leery of the COVID-19 shot, and anyone younger than 16 doesn’t qualify under the government’s emergency use provisions.

But if half of the county’s eligible population wants to be inoculated, officials are going to have to administer shots at a rate unseen in human history.

“We’re talking about giving 52,000 shots if half the people take it who are eligible to get it. That is an absolutely terrifying number,” Kiplinger said.

During the early days of the rollout vaccines will remain somewhat scarce. As of this week, Texas has received enough vaccines to begin the inoculation process for 7% of eligible residents, according to the state health department. Nacogdoches County had received enough vaccine for 6% of eligible residents — frontline healthcare workers, emergency responders, adults over 65 and people with chronic health conditions.

City and county officials have developed a fully scalable plan that can do shot clinics with as few as 20 patients or as many as 2,000. For the foreseeable future, these clinics will be by appointment only.

People who want to receive the vaccine should register with their health care provider or on the Brookshire Brothers waiting list at www.brookshirebrothers.com/covid-19.

“Can you imagine if we said we’re going to do an open call for vaccines?” Kiplinger said. “You wouldn’t be able to get around the west loop. We’d have 10,000 cars park on the loop. There’s no way to do that, even in a community as small as we are.”

How many people have had the virus?

As of this week, state officials have confirmed more than 3,300 cases of the virus in Nacogdoches County since March, Kiplinger said.

“That number is probably half of the real number. I know lots of people who lost their sense of taste and smell and never went to a physician and never got tested. I also know that in the first five months of this, testing was cumbersome and difficult and challenging,” he said.

Tests were also in extremely short supply during the first days after the pandemic reached East Texas. A Daily Sentinel reporter who experienced COVID-19 symptoms in late March tested negative for flu but was unable unable to be tested for the coronavirus.

In August as cases spiked, another Sentinel employee had trouble finding a free or affordable test, but more recently various types of testing have become widely available.

As of Friday morning, there were 422 active cases in the county, which the fire chief reiterated is likely a low number.