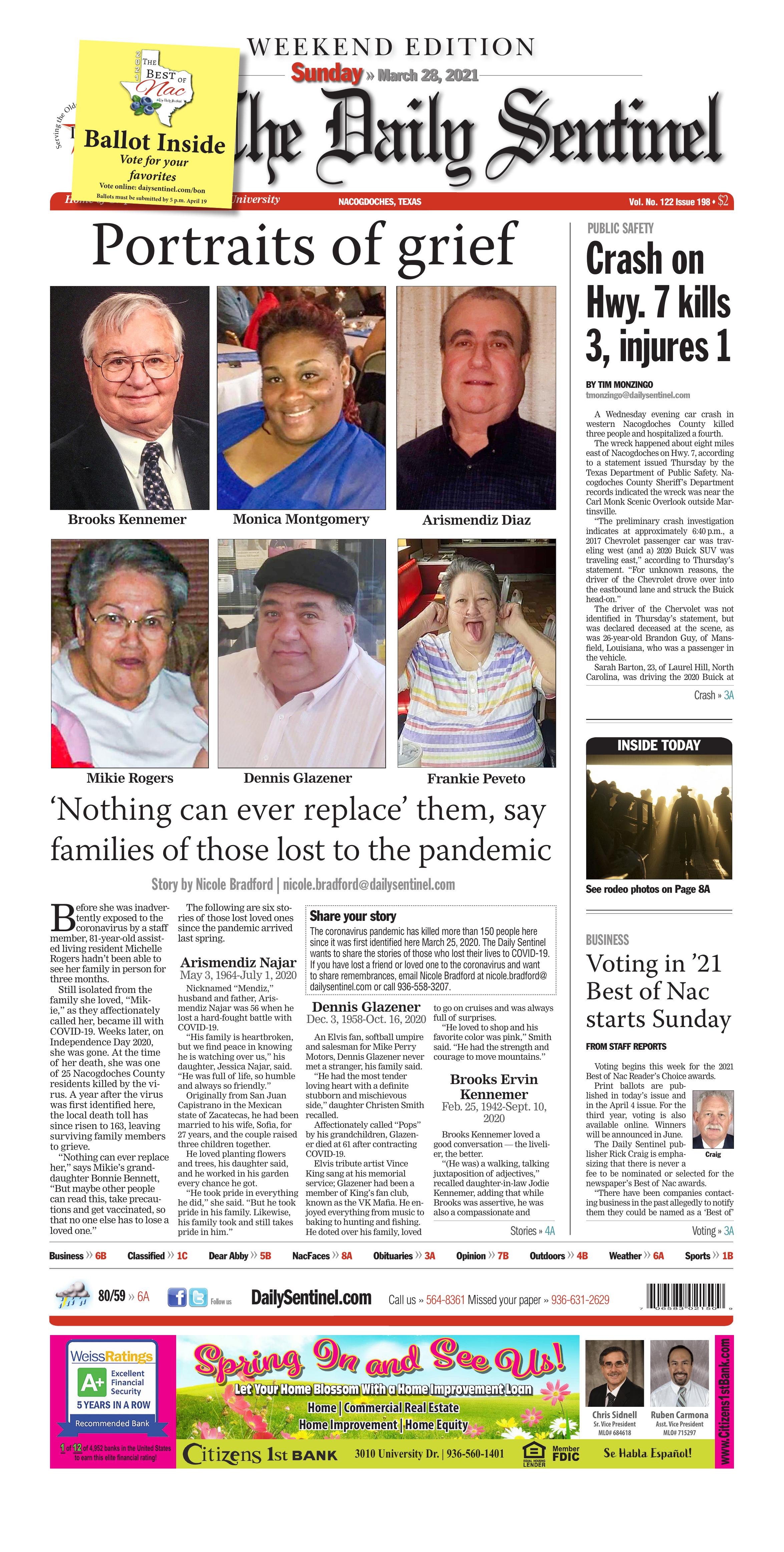 Before she was inadvertently exposed to the coronavirus by a staff member, 81-year-old assisted living resident Michelle Rogers hadn’t been able to see her family in person for three months.

Still isolated from the family she loved, “Mikie,” as they affectionately called her, became ill with COVID-19. Weeks later, on Independence Day 2020, she was gone. At the time of her death, she was one of 25 Nacogdoches County residents killed by the virus. A year after the virus was first identified here, the local death toll has since risen to 163, leaving surviving family members to grieve.

“Nothing can ever replace her,” says Mikie’s granddaughter Bonnie Bennett, “But maybe other people can read this, take precautions and get vaccinated, so that no one else has to lose a loved one.”

The following are six stories of those lost loved ones since the pandemic arrived last spring.

Nicknamed “Mendiz,” husband and father, Arismendiz Najar was 56 when he lost a hard-fought battle with COVID-19.

“His family is heartbroken, but we find peace in knowing he is watching over us,” his daughter, Jessica Najar, said. “He was full of life, so humble and always so friendly.”

Originally from San Juan Capistrano in the Mexican state of Zacatecas, he had been married to his wife, Sofia, for 27 years, and the couple raised three children together.

He loved planting flowers and trees, his daughter said, and he worked in his garden every chance he got.

“He had the most tender loving heart with a definite stubborn and mischievous side,” daughter Christen Smith recalled.

Affectionately called “Pops” by his grandchildren, Glazener died at 61 after contracting COVID-19.

Elvis tribute artist Vince King sang at his memorial service; Glazener had been a member of King’s fan club, known as the VK Mafia. He enjoyed everything from music to baking to hunting and fishing. He doted over his family, loved to go on cruises and was always full of surprises.

“He loved to shop and his favorite color was pink,” Smith said. “He had the strength and courage to move mountains.”

Brooks Kennemer loved a good conversation — the livelier, the better.

“(He was) a walking, talking juxtaposition of adjectives,” recalled daughter-in-law Jodie Kennemer, adding that while Brooks was assertive, he was also a compassionate and reliable problem solver.

Whether in a morning coffee group, dominoes or Bible studies, he sought out interactions with people.

“Brooks truly loved engaging with people and spent getting to know them — really learning about them,” she said.

Raised on a family farm in San Augustine, Kennemer spent his career at Olds Hardware & Lumber after earning a bachelor’s degree from Stephen F. Austin State University. With his wife of 54 years, Charlotte, he enjoyed horseback riding, square dancing and traveling.

He also spent much of his life and all of his retirement serving his community — teaching Sunday school, volunteering for church fundraisers and serving on the board of SFA’s Wesley Foundation. Always up for a road trip, he volunteered to drive others to doctors appointments or for out-of-town errands.

Monica Montgomery loved her job and was excited about the upcoming birth of her first grandchild, her mother, Judy Montgomery said.

But the 44-year-old didn’t live to meet her grandson, Khylin, now 7 months old. Instead, she died on Mother’s Day 2020, from complications related to COVID-19.

“Mother’s Day won’t ever be the same,” Montgomery said.

The oldest of three siblings, Monica had worked as a dietary supervisor at The Arbor, an assisted living facility. She loved working with the elderly and cooking, her mother said.

On March 19, 2021, which would have been Monica’s 45th birthday, her family and friends gathered at Sunset Memorial Park to release balloons. They were red, her favorite color.

Before she fell ill with COVID-19 last year, Frankie Gene Peveto cemented her reputation among friends family as the life of the party.

“She taught every one of us how to play cards,” said her oldest grandchild, Melanie Allen. “While she was still driving, she loved to go to the bingo halls in her big long Cadillac.”

The family all called her “Ninnie.” Born in Wichita Falls, she lived most of her life in East Texas and attended Nacogdoches High School.

They’d had phone calls and Snapchat videos, but in the four months before her death, the family hadn’t been able to see her in person.

“She was my best friend,” Allen said. “I felt like she was taken from us.”

A grandmother and great-grandmother, Michelle “Mikie” Rogers is remembered by her family as the sweetest woman they ever knew.

The Longview native made her home in Nacogdoches with husband, Joe. The couple raised four girls and spent 54 years together before his death in 2013. She particularly loved cooking and decorating, and had a group of close friends known as the Steel Magnolias who socialized and traveled together for more than 45 years. More than anything, though, she treasured her family.

“Her whole world was her daughters and grand babies and great-grand babies,” said granddaughter Bonnie Bennett. “We loved her so much and miss her every day.”

The wreck happened about eight miles east of Nacogdoches on Hwy. 7, according to a statement issued Thursday by the Texas Department of Public Safety. Nacogdoches County Sheriff’s Department records indicated the wreck was near the Carl Monk Scenic Overlook outside Martinsville.

“The preliminary crash investigation indicates at approximately 6:40 p.m., a 2017 Chevrolet passenger car was traveling west (and a) 2020 Buick SUV was traveling east,” according to Thursday’s statement. “For unknown reasons, the driver of the Chevrolet drove over into the eastbound lane and struck the Buick head-on.”

The driver of the Chervolet was not identified in Thursday’s statement, but was declared deceased at the scene, as was 26-year-old Brandon Guy, of Mansfield, Louisiana, who was a passenger in the vehicle.

Sarah Barton, 23, of Laurel Hill, North Carolina, was driving the 2020 Buick at the time of the crash, and she also was pronounced deceased at the scene. Sammy Bell, 40, of Center, was a passenger in the Buick and was transported to Nacogdoches Memorial Hospital.

The crash is still under investigation, according to the department.

Voting begins this week for the 2021 Best of Nac Reader’s Choice awards.

Print ballots are published in today’s issue and in the April 4 issue. For the third year, voting is also available online. Winners will be announced in June.

The Daily Sentinel publisher Rick Craig is emphasizing that there is never a fee to be nominated or selected for the newspaper’s Best of Nac awards.

“There have been companies contacting business in the past allegedly to notify them they could be named as a ‘Best of’ winner by paying a fee,” Craig said. “These companies are not associated with our contest in any way.”

Original print ballots with at least 30 categories marked must be submitted to the Sentinel by 5 p.m. Monday, April 19, which is also the deadline for online voting.

“We are excited to add new categories this year based on reader suggestions,” Craig said.

Online voting is free and open to subscribers and non-subscribers, but limited to one vote per category per email address.