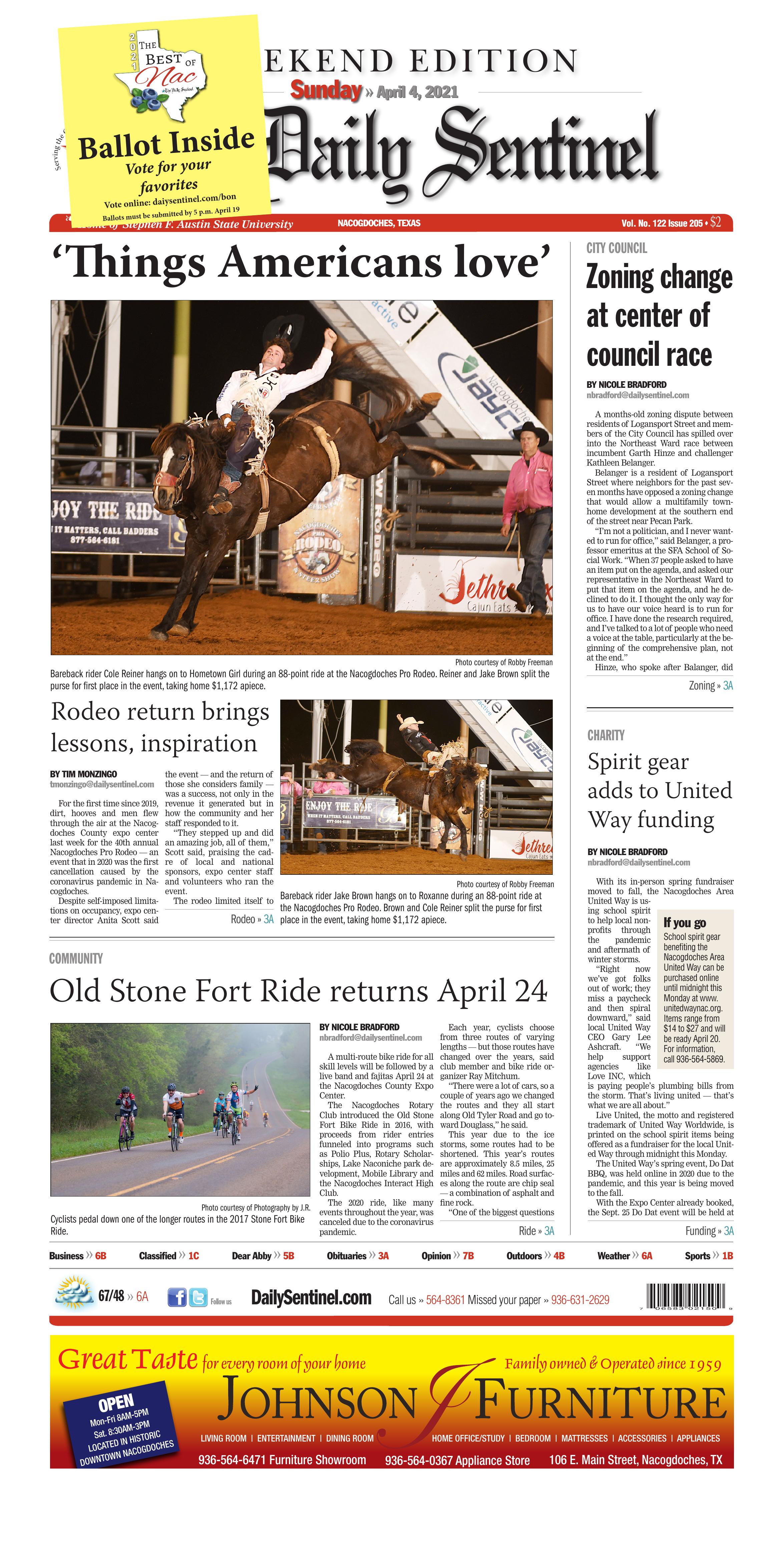 Photo courtesy of Photography by J.R.

Cyclists pedal down one of the longer routes in the 2017 Stone Fort Bike Ride.

A multi-route bike ride for all skill levels will be followed by a live band and fajitas April 24 at the Nacogdoches County Expo Center.

The 2020 ride, like many events throughout the year, was canceled due to the coronavirus pandemic.

Each year, cyclists choose from three routes of varying lengths — but those routes have changed over the years, said club member and bike ride organizer Ray Mitchum.

“There were a lot of cars, so a couple of years ago we changed the routes and they all start along Old Tyler Road and go toward Douglass,” he said.

This year due to the ice storms, some routes had to be shortened. This year’s routes are approximately 8.5 miles, 25 miles and 62 miles. Road surfaces along the route are chip seal — a combination of asphalt and fine rock.

“One of the biggest questions we get is what type of road surface it is,” Mitchum said, adding that the ride is used for training by serious cyclists planning to enter rides such as the BP MS 150, a bike ride from Houston to Austin.

Ride support will be provided from the beginning of the ride until 3 p.m. Riders returning to the Expo Center can eat fajitas and listen to live music by the CrimeStoppers Band.

Signup is available at Active.com under Old Stone Fort Bicycle Ride 2021. Riders can pick up packets, which include a bib number, goodie bag and route map, at 5 p.m. the day before the ride at Nac Snack Friday in downtown Nacogdoches.

For the first time since 2019, dirt, hooves and men flew through the air at the Nacogdoches County expo center last week for the 40th annual Nacogdoches Pro Rodeo — an event that in 2020 was the first cancellation caused by the coronavirus pandemic in Nacogdoches.

Despite self-imposed limitations on occupancy, expo center director Anita Scott said the event — and the return of those she considers family — was a success, not only in the revenue it generated but in how the community and her staff responded to it.

“They stepped up and did an amazing job, all of them,” Scott said, praising the cadre of local and national sponsors, expo center staff and volunteers who ran the event.

The rodeo limited itself to 50% capacity with assigned seating and online ticket purchases as methods to reduce possible COVID-19 exposure. Those were all measures put into place before Gov. Gregg Abbott rescinded the statewide pandemic regulations.

Even with the hiccups that come from implementing new systems, like online ticket purchasing, Scott said, the event came close to generating the same amount of revenue as in 2019, which was a banner year.

The profitability of this year’s event came largely from increased sponsorships that included interest from small local businesses and national brands, Cinch and Pendleton Whiskey.

The 2020 rodeo had already garnered more than $50,000 in sponsorship money before it was shuttered over fears of the virus, and Scott said most of those sponsors rolled that over for this year’s event when given the option for that or a refund.

Other local vendors jumped in where it necessary, like the hospitality booths for food. Scott said she’d worried about asking hard-hit restaurants to contribute this year, but three came in and catered the event.

One local business that Scott initially purchased items from came back and contributed employees as volunteers to help prepare for the event and run the VIP area, she said.

“It’s volunteers like that, it’s sponsors that are dedicated that help make this rodeo what it is,” she said. “This is truly a community event and we had came great volunteers that came and helped us.”

Scott said that dedication translated into an important event for the competitors, as well.

Clay Tran, a three-time rodeo champion and the 9th-ranked team roper in the world won his event, as did the world’s 11th-ranked tie-down roper Tyson Durfey.

More than 24 of the competitors at the rodeo qualified to compete at the National Finals Rodeo, according to information released by livestock provider Pete Carr Pro Rodeo.

“People that don’t know rodeo really don’t understand what we brought here to Nacogdoches. It was really incredible to see how many big names we had,” Scott said. “Pete (Carr) and his crew always do an amazing job for us, and this year was no exception. Those animals were incredible.”

Scott said there were lessons learned from the rodeo’s return that could carry over, like the numbered seating and online ticket sales, and new signage installed around the arena.

“To say we are pleased with this year’s rodeo would be an absolute understatement,” she said. “It was so nice to be back doing things and share in the excitement of being able to do things Americans love.”

A months-old zoning dispute between residents of Logansport Street and members of the City Council has spilled over into the Northeast Ward race between incumbent Garth Hinze and challenger Kathleen Belanger.

Belanger is a resident of Logansport Street where neighbors for the past seven months have opposed a zoning change that would allow a multifamily high-density development — known as R-4 zoning — at the end of the street near Pecan Park.

“I’m not a politician, and I never wanted to run for office,” said Belanger, a professor emeritus at the SFA School of Social Work. “When 37 people asked to have an item put on the agenda, and asked our representative in the Northeast Ward to put that item on the agenda, and he declined to do it. I thought the only way for us to have our voice heard is to run for office. I have done the research required, and I’ve talked to a lot of people who need a voice at the table, particularly at the beginning of the comprehensive plan, not at the end.”

Hinze, who spoke after Balanger, did not speak about the zoning issue and did not have an opportunity respond during the forum. Council members have declined to reconsider the zoning change.

“The way we can make our bucks go further is to use infill,” Hinze said, “to use those areas where we already have infrastructure in place — the water, the sewer the streets. I’m certainly not for putting in apartment complexes where there are single family houses, but where there is like developments to focus on that, and then to lower (development) barriers, policy-wise.”

Belanger agreed that adequate housing is a vital ingredient to economic development, but said she opposed to putting multifamily into single family areas.

“I also understand there are a lot of barriers to building these homes right now,” she said. “Any business will talk about it’s easier to do that in Lufkin than it is in Nacogdoches. So I think we really have to remove those barriers of complicated procedures, time-consuming approval processes and lack of transparency.”

The president of locally based Ark Pharmacies Inc., Hinze said he has learned much during his time so far on the council.

“There’s no anti-development within the city, but that’s the perception,” Hinze said. “The city is busy keeping potholes filled, water running and doing a great job of it. One thing that surprised me, though, is how reactive everything was. There was excellent organization within the different departments, but not citywide.”

Citywide coordination and proactive planning is improving, he said: “We’ve made a lot of progress.”

While economic development is important, Belanger said it is also important that Nacogdoches retains its unique identity.

“As we have economic development and look at how we want the city to grow, we need to keep our historical treasures,” she said.

The Northeast Ward race is the only contested one on the May 1 ballot after candidates for other seats withdrew or were disqualified.

Northwest Ward incumbent Amelia Fischer initially faced challenger Albert Lasater, the grandson of Millard’s Crossing founder Lera Millard Thomas. But Lasater, whose home is on the family property at Millard’s Crossing, last month learned he had been disqualified from serving when property records showed a recently created driveway at his home placed his address on a county road.

Mize and Fischer both participated in the March 25 Chamber forum, responding to questions and stating their priorities on the council. Fischer cited community participation and trust along with creating a longterm vision for the city. Among Mize’ priorities is collaboration with entities such as SFA and the school districts, job creation and economic development.

With its in-person spring fundraiser moved to fall, the Nacogdoches Area United Way is using school spirit to help local nonprofits through the pandemic and aftermath of winter storms.

“Right now we’ve got folks out of work; they miss a paycheck and then spiral downward,” said local United Way CEO Gary Lee Ashcraft. “We help support agencies like Love INC, which is paying people’s plumbing bills from the storm. That’s living united — that’s what we are all about.”

Live United, the motto and registered trademark of United Way Worldwide, is printed on the school spirit items being offered as a fundraiser for the local United Way through midnight this Monday.

The United Way’s spring event, Do Dat BBQ, was held online in 2020 due to the pandemic, and this year is being moved to the fall.

With the Expo Center already booked, the Sept. 25 Do Dat event will be held at the A.L. Mangham Jr. Regional Airport for 2021.

“A lot of the Spring events have moved to the fall, so we’re going to have a busy fall in Nacogdoches,” Ashcraft said. “We hope to have an in-person campaign kick-off in August.”

Through the Spring Spirit Fundraiser, polos, T-shirts and caps can be customized for any Nacogdoches County school, with proceeds going benefiting local agencies.

“You pick your color and school, and (polo shirts) have the United Way logo on one sleeve and school logo on the other,” Ashcraft said.

“We wanted to foster school spirit and engage the schools with the United Way and create a connection,” said board chairwoman Kinnie Reina.

Thus far, Chireno ISD schools are leading the pack in spirit gear sales, she said, followed by Nacogdoches ISD campuses. Merchandise can be ordered online at www.unitedwaynac.org and items will be ready for pickup April 20. For information, call 936-564-5869.

School spirit gear benefiting the Nacogdoches Area United Way can be purchased online until midnight this Monday at www.unitedwaynac.org. Items range from $14 to $27 and will be ready April 20. For information, call 936-564-5869.