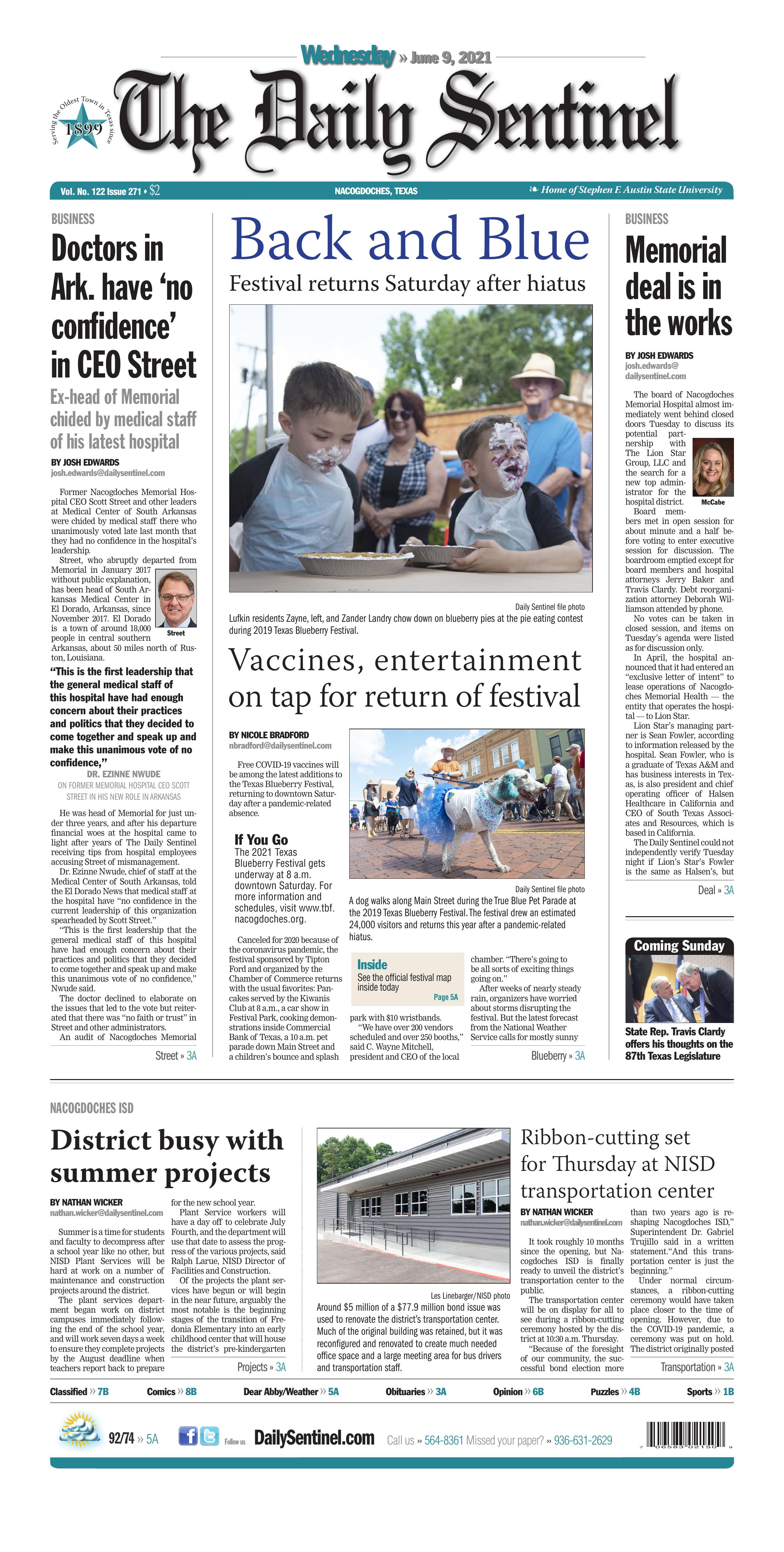 A dog walks along Main Street during the True Blue Pet Parade at the 2019 Texas Blueberry Festival. The festival drew an estimated 24,000 visitors and returns this year after a pandemic-related hiatus.

Free COVID-19 vaccines will be among the latest additions to the Texas Blueberry Festival, returning to downtown Saturday after a pandemic-related absence.

Canceled for 2020 because of the coronavirus pandemic, the festival sponsored by Tipton Ford and organized by the Chamber of Commerce returns with the usual favorites: Pancakes served by the Kiwanis Club at 8 a.m., a car show in Festival Park, cooking demonstrations inside Commercial Bank of Texas, a 10 a.m. pet parade down Main Street and a children’s bounce and splash park with $10 wristbands.

“We have over 200 vendors scheduled and over 250 booths,” said C. Wayne Mitchell, president and CEO of the local chamber. “There’s going to be all sorts of exciting things going on.”

After weeks of nearly steady rain, organizers have worried about storms disrupting the festival. But the latest forecast from the National Weather Service calls for mostly sunny skies with a high around 92 for Saturday’s festival.

COVID-19 vaccines will be given from 9 a.m. to 4 p.m. at the downtown Fire Station, 212 E. Pilar St. The shots will be given at no cost. No residency restrictions apply, and no appointments are needed.

Three stages of entertainment begin at 8 a.m. and include the Plaza Principal Stage behind the Bright Visitor’s Center, where Mr. and Miss Blueberry winners will be crowned at 3 p.m. The Main Street Stage will be on the east end of Main Street near the Mound Street intersection, and the CBTx Stage will be inside the lobby of the bank at 215 E. Main St.

Also downtown, the Fredonia Brewery will host its Brewberry Fest from noon to 10 p.m. featuring Brewberry, a cream ale made with a pound of blueberries per gallon. Velvet Funk will perform at the brewery from 6 to 9 p.m.

At Main and Pearl streets, the Nacogdoches Farmers Market will be hosting its annual Blueberry Wine Down, with at least five area wineries offering wine by the glass and bottle from 9 a.m. to 1 p.m. Some, such as Naca Valley based in Nacogdoches, will be serving blueberry wine, says market manager Lynn Jones.

Merci’s World Cuisine will offer samples highlighting local produce, and some vendors are expected to have peaches and blueberries.

The 2021 Texas Blueberry Festival gets underway at 8 a.m. downtown this Saturday. For more information and schedules, visit www.tbf.nacogdoches.org.

Former Nacogdoches Memorial Hospital CEO Scott Street and other leaders at Medical Center of South Arkansas were chided by medical staff there who unanimously voted late last month that they had no confidence in the hospital’s leadership.

Street, who abruptly departed from Memorial in January 2017 without public explanation, has been head of South Arkansas Medical Center in El Dorado, Arkansas, since November 2017. El Dorado is a town of around 18,000 people in central southern Arkansas, about 50 miles north of Ruston, Louisiana.

He was head of Memorial for just under three years, and after his departure financial woes at the hospital came to light after years of The Daily Sentinel receiving tips from hospital employees accusing Street of mismanagement.

Dr. Ezinne Nwude, chief of staff at the Medical Center of South Arkansas, told the El Dorado News that medical staff at the hospital have “no confidence in the current leadership of this organization spearheaded by Scott Street.”

“This is the first leadership that the general medical staff of this hospital have had enough concern about their practices and politics that they decided to come together and speak up and make this unanimous vote of no confidence,” Nwude said.

The doctor declined to elaborate on the issues that led to the vote but reiterated that there was “no faith or trust” in Street and other administrators.

An audit of Nacogdoches Memorial Hospital’s finances under Street found a nearly $10 million discrepancy in reported revenue, raising concerns of “suspect methodology” used in the hospital’s accounting, auditors from BKD said in late 2017, leading some hospital board members to accuse Street of fraud during a public meeting.

Unaudited net income from the last year of Street’s tenure at Memorial was $67,000. BKD auditor Chris Clark found the true amount to be a net loss of $9.3 million.

Summer is a time for students and faculty to decompress after a school year like no other, but NISD Plant Services will be hard at work on a number of maintenance and construction projects around the district.

The plant services department began work on district campuses immediately following the end of the school year, and will work seven days a week to ensure they complete projects by the August deadline when teachers report back to prepare for the new school year.

Plant Service workers will have a day off to celebrate July Fourth, and the department will use that date to assess the progress of the various projects, said Ralph Larue, NISD Director of Facilities and Construction.

Of the projects the plant services have begun or will begin in the near future, arguably the most notable is the beginning stages of the transition of Fredonia Elementary into an early childhood center that will house the district’s pre-kindergarten program under one roof.

“I think one of the most important (projects), hands down, is the Fredonia Elementary conversion to a Pre-K,” Larue said. “We’ll have one large building, one campus dedicated to Pre-K. I think it will be a significant help to our district and preparing those children for their education.”

Slated to begin as a pre-kindergarten school in the coming years, the first step of the transition will begin with the construction of a new drop-off and pick-up driveway. The bid was awarded to Drewery & Wheaton LLC in January.

Plant Services has worked with the NISD Chief Academic Officer Dr. Daya Hill and the teachers to get a feel for what a pre-kindergarten program looks like, said Larue.

“The program dictates the facility. So we’re all working together to try to make sure we convert this building into something that will really work for the school district,” Larue said.

Mike Moses Middle School — the soon-to-be elementary school — is set to get a new roof, as well as a new HVAC in the gymnasium.

Designs and engineering for the transition from Mike Moses Middle School to elementary have begun, according to Larue. Of the things that have to be implemented for the transition is the inclusion of a playground and adequate fencing for security purposes. The conversion will not take place until a classroom addition at McMichael Middle School is completed, and the two middle schools are combined.

As for the capstone projects, construction of the new Emeline Carpenter Elementary school and the addition to the McMichael Middle School have been pushed behind schedule by about three or four weeks due to weeks of inclement weather, Larue said.

Other summer maintenance projects include:

■ A coat of polyurethane, a wood floor finish, to gymnasium floors

■ Locating a place in the district for a teacher training room

■ Annual floor strip and wax at all district campuses

Around $5 million of a $77.9 million bond issue was used to renovate the district’s transportation center. Much of the original building was retained, but it was reconfigured and renovated to create much needed office space and a large meeting area for bus drivers and transportation staff.

It took roughly 10 months since the opening, but Nacogdoches ISD is finally ready to unveil the district’s transportation center to the public.

The transportation center will be on display for all to see during a ribbon-cutting ceremony hosted by the district at 10:30 a.m. Thursday.

“Because of the foresight of our community, the successful bond election more than two years ago is reshaping Nacogdoches ISD,” Superintendent Dr. Gabriel Trujillo said in a written statement.“And this transportation center is just the beginning.”

Under normal circumstances, a ribbon-cutting ceremony would have taken place closer to the time of opening. However, due to the COVID-19 pandemic, a ceremony was put on hold. The district originally posted a video and photos to the district’s website to give the public a first look at the facility.

Around $5 million was used to renovate the district’s transportation center. The majority of the original building was retained, but it was reconfigured.

The transportation center — the first project completed with funds from a $77.9 million bond issue passed overwhelmingly by voters in November 2018 — re-opened for district use in August 2020.The improved center provides office space and large meeting rooms for drivers, as well as an expanded garage area to accommodate as many as six full-size buses.

The new district support center is the only other major project related to the 2018 bond projects to be completed. The new Emeline Carpenter Elementary School and the expansion to McMichael Middle School — both located on the southeast loop — as well as the Malcolm Rector Center for Advanced Careers and Innovation at Nacogdoches High School are still in progress. The press box project at Dragon Stadium is still on hold.

The board of Nacogdoches Memorial Hospital almost immediately went behind closed doors Tuesday to discuss its potential partnership with The Lion Star Group, LLC and the search for a new top administrator for the hospital district.

Board members met in open session for about minute and a half before voting to enter executive session for discussion. The boardroom emptied except for board members and hospital attorneys Jerry Baker and Travis Clardy. Debt reorganization attorney Deborah Williamson attended by phone.

No votes can be taken in closed session, and items on Tuesday’s agenda were listed as for discussion only.

In April, the hospital announced that it had entered an “exclusive letter of intent” to lease operations of Nacogdoches Memorial Health — the entity that operates the hospital — to Lion Star.

Lion Star’s managing partner is Sean Fowler, according to information released by the hospital. Sean Fowler, who is a graduate of Texas A&M and has business interests in Texas, is also president and chief operating officer of Halsen Healthcare in California and CEO of South Texas Associates and Resources, which is based in California.

The Daily Sentinel could not independently verify Tuesday night if Lion’s Star’s Fowler is the same as Halsen’s, but multiple sources have said he is.

Searches for Lion Star Group LLC in databases of both California- and Texas-based businesses turned up no active results.

Halsen Healthcare purchased Watsonville Community Hospital in California in October 2019 for $30 million. It then sold the building and property back to Alabama-based Medical Properties Trust for $39 million and leased the property from the other company. The Watsonville hospital fired Haslen from its leadership role in January for failing to meet “financial obligations to various stakeholders,” according to The Pajaronian newspaper in Watsonville.

That’s left some community members privately wondering about Lion Star’s intention’s with Nacogdoches’ publicly funded hospital. Those who have raised concerns about the company have declined to speak on the record, while others have said Lion Star is the hospital’s best option at survival and the Watsonville hospital’s financial trouble was related to the COVID-19 pandemic.

The hospital board also discussed forming a committee to search for a new hospital administrator after interim CEO Gary Stokes departed in May.

Since his departure, chief financial officer Rhonda McCabe has been filling the role as CEO.

Stokes came out of retirement in 2019 as the third interim leader of Memorial since the abrupt resignation of Scott Street in January 2017.

That led to the hospital dropping its contract with CHC and operating as an independent facility as it searched for a partner. The hospital hired Steven L. Smith to lead the facility, but he left in February 2019.