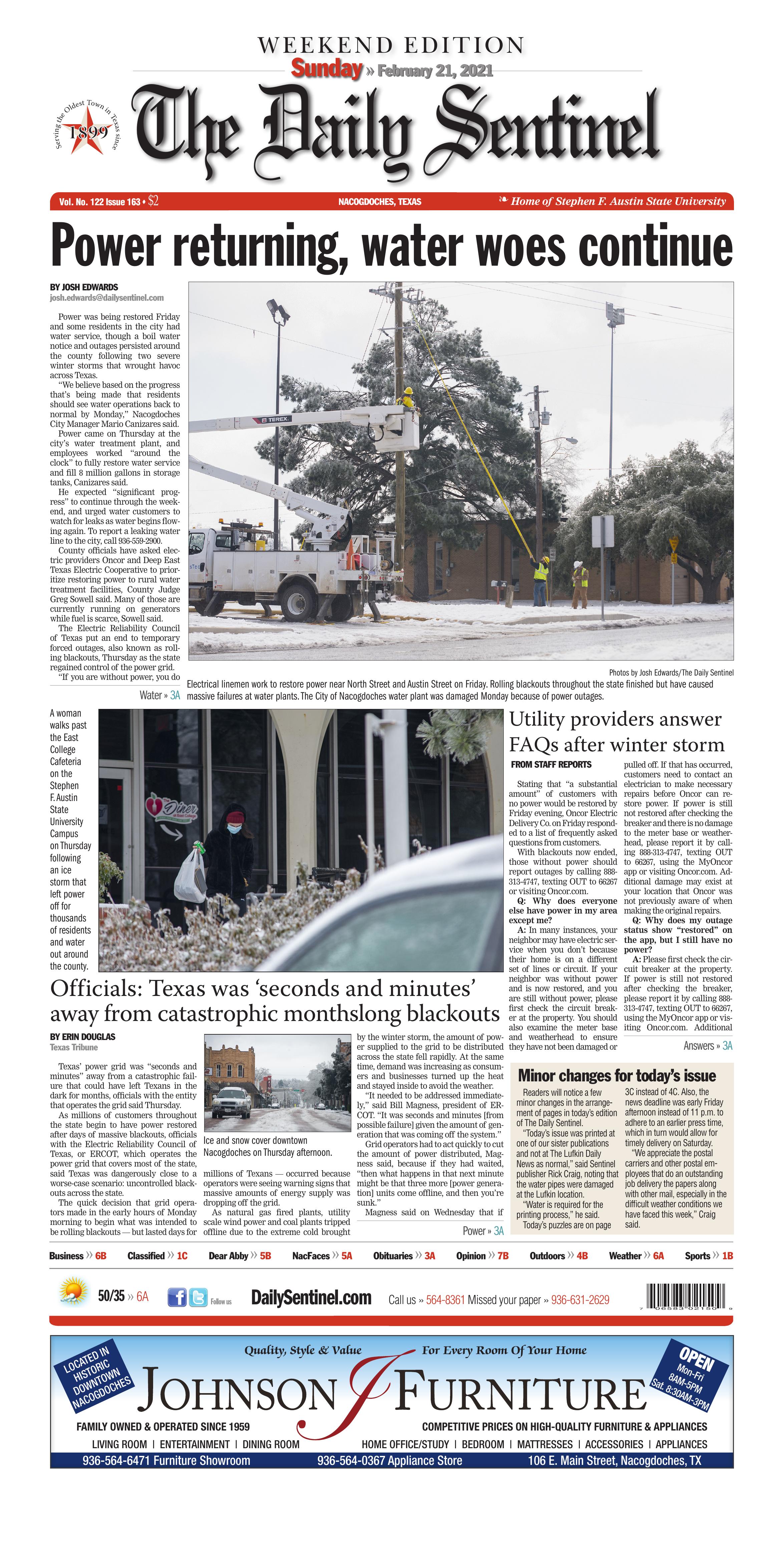 Texas’ power grid was “seconds and minutes” away from a catastrophic failure that could have left Texans in the dark for months, officials with the entity that operates the grid said Thursday.

As millions of customers throughout the state begin to have power restored after days of massive blackouts, officials with the Electric Reliability Council of Texas, or ERCOT, which operates the power grid that covers most of the state, said Texas was dangerously close to a worse-case scenario: uncontrolled blackouts across the state.

The quick decision that grid operators made in the early hours of Monday morning to begin what was intended to be rolling blackouts — but lasted days for millions of Texans — occurred because operators were seeing warning signs that massive amounts of energy supply was dropping off the grid.

As natural gas fired plants, utility scale wind power and coal plants tripped offline due to the extreme cold brought by the winter storm, the amount of power supplied to the grid to be distributed across the state fell rapidly. At the same time, demand was increasing as consumers and businesses turned up the heat and stayed inside to avoid the weather.

“It needed to be addressed immediately,” said Bill Magness, president of ERCOT. “It was seconds and minutes [from possible failure] given the amount of generation that was coming off the system.”

Grid operators had to act quickly to cut the amount of power distributed, Magness said, because if they had waited, “then what happens in that next minute might be that three more [power generation] units come offline, and then you’re sunk.”

Magness said on Wednesday that if operators had not acted in that moment, the state could have suffered blackouts that “could have occurred for months,” and left Texas in an “indeterminately long” crisis.

The worst case scenario: Demand for power overwhelms the supply of power generation available on the grid, causing equipment to catch fire, substations to blow, power lines to go down.

If the grid had gone totally offline, the physical damage to power infrastructure from overwhelming the grid can take months to repair, said Bernadette Johnson, senior vice president of power and renewables at Enverus, an oil and gas software and information company headquartered in Austin.

“As chaotic as it was, the whole grid could’ve been in blackout,” she said. “ERCOT is getting a lot of heat, but the fact that it wasn’t worse is because of those grid operators.”

If that had occurred, then even as power generators recovered from the cold, ERCOT would have been unable to quickly reconnect them back to the grid, Johnson said.

Grid operators would have needed to slowly and carefully bring generators and customers back online, all the while taking care to not to cause more damage to the grid. It’s a delicate process, Johnson explained, because each part of the puzzle — the generators producing power, the transmission lines that move the power, and the customers that use it — must be carefully managed.

“It has to balance constantly,” she said. “Once a grid goes down, it’s hard to bring it back online. If you bring on too many customers, then you have another outage.”

ERCOT officials have repeatedly said that the winter storm that swept the state caught power generators off guard. The storm far exceeded what ERCOT projected in the fall to prepare for winter.

“The operators who took those actions to prevent a catastrophic blackout, and much worse damage to our system, that was, I would say, the most difficult decision that had to be made throughout this whole event,” Magness said.

Nine grid operators are working at any given time who make these sorts of decisions, said Leslie Sopko, a spokesperson for ERCOT.

“At the end of the day, our operators are highly-trained and have the authority to make decisions that protect the reliability of the electric system,” she said in a statement.

ERCOT made “significant progress” overnight Wednesday to restore customer power to many Texans, and remaining power outages are likely due to ice storm damage to the distribution system. Some areas that were taken offline will also need to be restored manually, according to ERCOT.

ERCOT warned that emergency conditions remain, and that “some level of rotating outages” may be necessary over the coming days to keep the grid stable.

Stating that “a substantial amount” of customers with no power would be restored by Friday evening, Oncor Electric Delivery Co. on Friday responded to a list of frequently asked questions from customers.

With blackouts now ended, those without power should report outages by calling 888-313-4747, texting OUT to 66267 or visiting Oncor.com.

Q: Why does everyone else have power in my area except me?

A: In many instances, your neighbor may have electric service when you don’t because their home is on a different set of lines or circuit. If your neighbor was without power and is now restored, and you are still without power, please first check the circuit breaker at the property. You should also examine the meter base and weatherhead to ensure they have not been damaged or pulled off. If that has occurred, customers need to contact an electrician to make necessary repairs before Oncor can restore power. If power is still not restored after checking the breaker and there is no damage to the meter base or weatherhead, please report it by calling 888-313-4747, texting OUT to 66267, using the MyOncor app or visiting Oncor.com. Additional damage may exist at your location that Oncor was not previously aware of when making the original repairs.

Q: Why does my outage status show “restored” on the app, but I still have no power?

A: Please first check the circuit breaker at the property. If power is still not restored after checking the breaker, please report it by calling 888-313-4747, texting OUT to 66267, using the MyOncor app or visiting Oncor.com. Additional damage may exist at your location that Oncor was not previously aware of when making the original repairs. Due to the large amounts of system activity surrounding power restoration, it may take some time for our tracking systems to accurately reflect your current status.

Q: Why is my power still out?

A: Remaining outages are the result of damage from most recent winter storm, previous winter weather and storm damage that could not be identified until equipment was re-energized, and damage to electric equipment caused by record-breaking low temperatures. Oncor personnel and out of state mutual assistance contractors are actively engaged in restoration efforts.

City officials on Friday reported some areas are seeing adequate water supply while others remain without water.

“City residents should plan for reduced water supply through Monday, Feb. 22, and continue to conserve water by not running appliances that require large amounts of water and limits showering to five minutes or less.”

A boil water notice remains in effect — water from taps should be boiled for at least two minutes before cooking, drinking or washing hands or face. Ice from refrigerators should not be consumed. City health inspectors on Friday were speaking with local restaurants planning to open this weekend regarding the boil water notice.

Breaks in pipes and water lines continue to be a problem and those discovering leaks should turn off water at the meter or call 936-559-2900 for assistance.

City trash pickup will resume on Monday on the regular schedule. For those overwhelmed with household trash, two roll-off dumpsters have been placed in the parking lot of the library and rec center, 1112 North St., for public use.

Abandoned vehicles remaining on roads were scheduled to be towed beginning Friday evening.

Readers will notice a few minor changes in the arrangement of pages in today’s edition of The Daily Sentinel.

“Today’s issue was printed at one of our sister publications and not at The Lufkin Daily News as normal,” said Sentinel publisher Rick Craig, noting that the water pipes were damaged at the Lufkin location.

“Water is required for the printing process,” he said.

Today’s puzzles are on page 3C instead of 4C. Also, the news deadline was early Friday afternoon instead of 11 p.m. to adhere to an earlier press time, which in turn would allow for timely delivery on Saturday.

“We appreciate the postal carriers and other postal employees that do an outstanding job delivery the papers along with other mail, especially in the difficult weather conditions we have faced this week,” Craig said.

Power was being restored Friday and some residents in the city had water service, though a boil water notice and outages persisted around the county following two severe winter storms that wrought havoc across Texas.

“We believe based on the progress that’s being made that residents should see water operations back to normal by Monday,” Nacogdoches City Manager Mario Canizares said.

Power came on Thursday at the city’s water treatment plant, and employees worked “around the clock” to fully restore water service and fill 8 million gallons in storage tanks, Canizares said.

He expected “significant progress” to continue through the weekend, and urged water customers to watch for leaks as water begins flowing again. To report a leaking water line to the city, call 936-559-2900.

The Electric Reliability Council of Texas put an end to temporary forced outages, also known as rolling blackouts, Thursday as the state regained control of the power grid.

“If you are without power, you do need to report it to your electric provider,” Sowell said. “Remote locations may not be fully restored for up to three weeks.”

As of Friday afternoon, Oncor reported more than 11,000 meters in the county without electricity. Deep East Texas Electric listed 8,800 local customers without power. Oncor expects power to be fully restored by Sunday.

To report a power outage to Oncor call 1-888-313-4747 or Text OUT to 66267. Oncor also distributes electricity in Nacogdoches County for Green Mountain Energy.

Those without power have the option of going to a warming shelter. Godtel and the county’s expo center have available space, Canizares said. A third shelter at the city’s recreation center is full.

“We are because of COVID having to spread individuals out, so our capacity is limited,” he said.

Anyone who needs shelter is urged to call 936-559-2510. Emergency responders around the county are also giving out blankets and supplies, Canizares said.

Nacogdoches County isn’t alone in its water woes. Around 800 water systems around the state are reporting issues caused by two winter storms this week, said Toby Baker, commissioner of the Texas Commission for Environmental Quality. Of those, 725 have issued boil water notices.

“We’re working with our partners to get water into every county in the state of Texas,” said Nim Kidd, director of the Texas Department of Emergency Management.

Gov. Greg Abbott on Thursday requested President Joe Biden declare a federal emergency in Texas. The move could allow Texans to apply for federal funding to cover the costs repairing damages related to the winter weather. Biden said Friday he would plan to visit Texas soon and sign the declaration. The president was virtually attending the Munich Security Conference on Friday with leaders from other world powers.

Abbott has also promised a probe into the council that oversees electric output in Texas, which has been blamed for not preparing for the winter storm.

“Everyone knows how challenging the past few days have been for our fellow Texans,” Abbott said. “I want everyone to know that everyone, all of us in the state of Texas, think that it’s completely unacceptable that you had to endure even 1 minute of the challenges you faced.”

Roads throughout the county began to thaw Friday and were expected to completely thaw by Sunday afternoon when the forecast calls for a high in the 50s.

Sowell urged residents to continue to stay off the roads as much as possible to conserve much-needed fuel to power critical infrastructure.

“Fuel trucks and fuel transports are beginning to once again operate due to improved road conditions, however it’s going to take some time to build back up the supply,” he said.