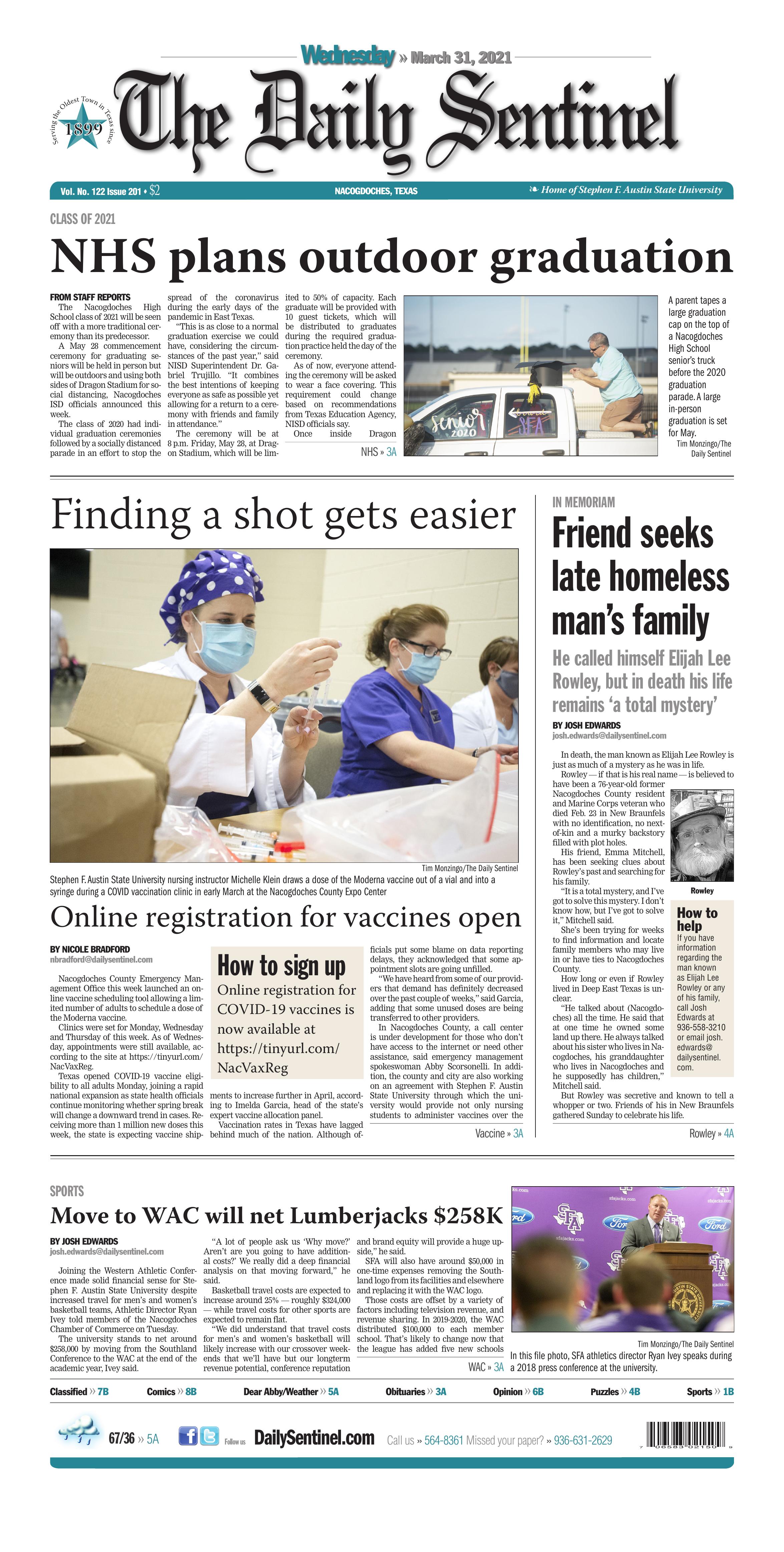 A parent tapes a large graduation cap on the top of a Nacogdoches High School senior’s truck before the 2020 graduation parade. A large in-person graduation is set for May.

The Nacogdoches High School class of 2021 will be seen off with a more traditional ceremony than its predecessor.

A May 28 commencement ceremony for graduating seniors will be held in person but will be outdoors and using both sides of Dragon Stadium for social distancing, Nacogdoches ISD officials announced this week.

The class of 2020 had individual graduation ceremonies followed by a socially distanced parade in an effort to stop the spread of the coronavirus during the early days of the pandemic in East Texas.

“This is as close to a normal graduation exercise we could have, considering the circumstances of the past year,” said NISD Superintendent Dr. Gabriel Trujillo. “It combines the best intentions of keeping everyone as safe as possible yet allowing for a return to a ceremony with friends and family in attendance.”

The ceremony will be at 8 p.m. Friday, May 28, at Dragon Stadium, which will be limited to 50% of capacity. Each graduate will be provided with 10 guest tickets, which will be distributed to graduates during the required graduation practice held the day of the ceremony.

As of now, everyone attending the ceremony will be asked to wear a face covering. This requirement could change based on recommendations from Texas Education Agency, NISD officials say.

Once inside Dragon Stadium, guests will be asked to social distance between family groups.

The ceremony will be shown on the video scoreboard at Dragon Stadium as well as livestreamed on the internet. In the case of inclement weather, the ceremony would be moved to 8 p.m., Saturday, May 29. If further rescheduling is required, a decision would be made by 10 a.m. May 29.

Clinics were set for Monday, Wednesday and Thursday of this week. As of Wednesday, appointments were still available, according to the site at https://tinyurl.com/NacVaxReg.

Vaccination rates in Texas have lagged behind much of the nation. Although officials put some blame on data reporting delays, they acknowledged that some appointment slots are going unfilled.

“We have heard from some of our providers that demand has definitely decreased over the past couple of weeks,” said Garcia, adding that some unused doses are being transferred to other providers.

In Nacogdoches County, a call center is under development for those who don’t have access to the internet or need other assistance, said emergency management spokeswoman Abby Scorsonelli. In addition, the county and city are also working on an agreement with Stephen F. Austin State University through which the university would provide not only nursing students to administer vaccines over the summer, but social work students and a Spanish speaking student to help with community outreach.

“One of the real challenges with COVID-19 is equal access to information about the vaccines,” said Nacodoches Fire Chief Keith Kiplinger, who is organizing vaccination clinics for the emergency management office. “I’m not pushing anybody to take the vaccine, but I want everybody to have the information they need to make an informed choice. Right now, that is sometimes difficult to get when you Google it or just watch the news. At a local level, we could have trusted faces that tell truthful information and let people make their decisions based on that.”

Phased COVID-19 vaccines began in late December with priority given to long-term care residents and healthcare workers. Since then, nursing homes in the U.S. have seen a 96% decline in new COVID-19 cases since cases peaked just over three months ago, according to a report released Tuesday by the American Health Care Association and National Center for Assisted Living. The report also shows COVID related deaths in nursing homes declined by 91 percent since Dec. 20, 2020.

Texas Health and Human Services estimates 221 active cases of the virus in Nacogdoches County this week.

The Associated Press contributed to this report.

Online registration for COVID-19 vaccines is available at https://tinyurl.com/NacVaxReg

The university stands to net around $258,000 by moving from the Southland Conference to the WAC at the end of the academic year, Ivey said.

“A lot of people ask us ‘Why move?’ Aren’t are you going to have additional costs?’ We really did a deep financial analysis on that moving forward,” he said.

“We did understand that travel costs for men’s and women’s basketball will likely increase with our crossover weekends that we’ll have but our longterm revenue potential, conference reputation and brand equity will provide a huge upside,” he said.

SFA will also have around $50,000 in one-time expenses removing the Southland logo from its facilities and elsewhere and replacing it with the WAC logo.

Those costs are offset by a variety of factors including television revenue, and revenue sharing. In 2019-2020, the WAC distributed $100,000 to each member school. That’s likely to change now that the league has added five new schools including SFA and other current Southland members Abilene Christian, Lamar and Sam Houston State.

“But the reality of it is that any distribution that we get from the conference is more than we get right now which is zero. It’s important for us to have this opportunity,” Ivey said.

National exposure in a larger athletic conference is expected to help boost enrollment, which university president Dr. Scott Gordon said has remained flat for the past decade and a half.

The WAC will be split into two divisions for sports other than football, men’s basketball and women’s basketball. One division will be made up of the Texas schools. The other division will include Southern Utah, Dixie State, New Mexico State, Grand Canyon, California Baptist, Seattle and Utah Valley.

In death, the man known as Elijah Lee Rowley is just as much of a mystery as he was in life.

Rowley — if that is his real name — is believed to have been a 76-year-old former Nacogdoches County resident and Marine Corps veteran who died Feb. 23 in New Braunfels with no identification, no next-of-kin and a murky backstory filled with plot holes.

His friend, Emma Mitchell, has been seeking clues about Rowley’s past and searching for his family.

She’s been trying for weeks to find information and locate family members who may live in or have ties to Nacogdoches County.

How long or even if Rowley lived in Deep East Texas is unclear.

But Rowley was secretive and known to tell a whopper or two. Friends of his in New Braunfels gathered Sunday to celebrate his life.

“A lot of people showed up and a lot of people spoke and told their stories,” Mitchell said. “They all remembered stories that he had told and things he said he had done.”

Mitchell and Rowley met one day outside a Taco Bell. She could tell he was homeless — the beard and bicycle were a dead giveaway — so she offered to buy lunch for him. They talked for hours. But he never gave much information about his family.

“He could tell a bunch of whopper stories. We don’t know how many of them were true,” Mitchell said.

She offered him a place to stay. He would sometimes disappear for weeks at a time. The experience was positive despite his absences.

“He was an angel from heaven. He loved everybody and everybody loved him. We never heard him say anything bad about anybody. If he could help you, he would help you. I’d never known him to ask for anything from anybody. He always gave of himself,” Mitchell said.

She last saw him the morning of Feb. 23 when she dropped him off at the Stripes gas station at the corner of Common Street and FM 306 in New Braunfels. He often sat there waiting to be picked up as a day laborer.

“He never was one that would stand out in the street and beg for money. If he couldn’t work he didn’t have any money,” she said. But people always picked him up for work, she said, “because people knew him around here.”

Mitchell found Rowley’s half brother living in San Marcos, but he wasn’t forthcoming with information, she said. They two didn’t grow up together and weren’t close.

A search of vital records by a reporter for The Daily Sentinel turned up nothing about the man. Calls to Nacogdoches County residents about Rowley’s age were met with responses of “I’ve never heard of him” and “That name doesn’t seem familiar.”

Of course, Rowley might not be his last name, though that name was confirmed by his half brother, Mitchell said. His true first name possibly began with the letter A.

Rowley told Mitchell he was born April 24, 1944, in Gonzales but later moved to Nacogdoches. No birth records for a Rowley during that time period in Gonzales County could be found. A request for information run in a newspaper in Gonzales turned up no information yet.

He said he was married to a woman named Connie, and the two owned property in Nacogdoches County. He might have a sister, children or grandchildren in or around Nacogdoches. He often spoke of a granddaughter named Abby.

Rowley told Mitchell that his goal was to move back to Nacogdoches and live in a trailer on his family land.

“It’s been a nightmare on trying to figure out who this man is,” Mitchell said said. “I thought for sure somebody in Nacogdoches would know who he is.”

Rowley is believed to be a U.S. Marine Corps veteran who was wounded in Vietnam some time around 1966. Rowley’s body has been held in a morgue in Lockhart since he died, Mitchell said.

A justice of the peace in Comal County has ordered Rowley’s fingerprints be run through a national database to try to discover his identity.

If you have information regarding the man known as Elijah Lee Rowley or any of his family, call Josh Edwards at 936-558-3210 or email josh.edwards@dailysentinel.com.