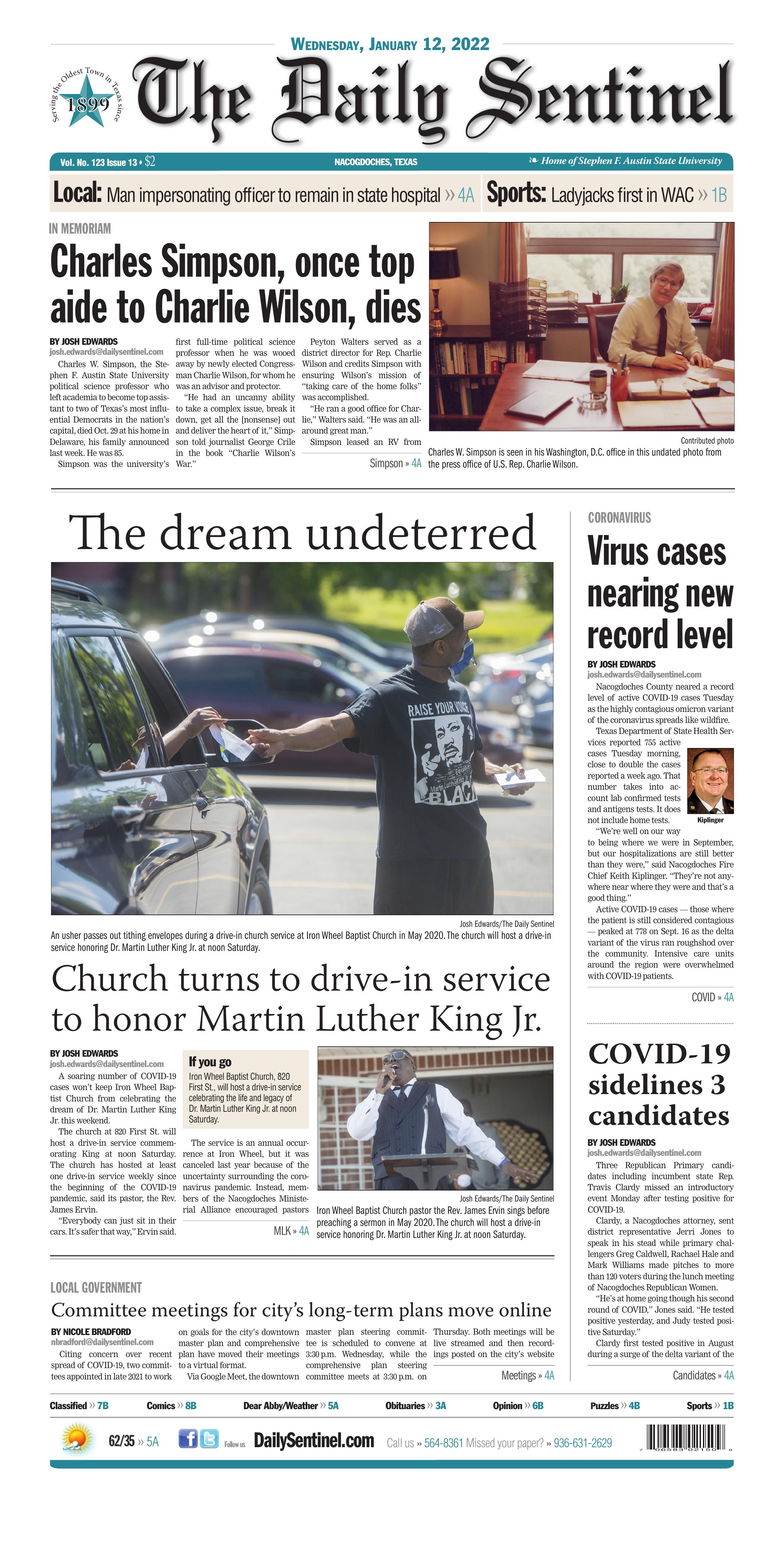 Charles W. Simpson is seen in his Washington, D.C. office in this undated photo from the press office of U.S. Rep. Charlie Wilson.

Charles W. Simpson, the Stephen F. Austin State University political science professor who left academia to become top assistant to two of Texas’s most influential Democrats in the nation’s capital, died Oct. 29 at his home in Delaware, his family announced last week. He was 85.

Simpson was the university’s first full-time political science professor when he was wooed away by newly elected Congressman Charlie Wilson, for whom he was an advisor and protector.

“He had an uncanny ability to take a complex issue, break it down, get all the [nonsense] out and deliver the heart of it,” Simpson told journalist George Crile in the book “Charlie Wilson’s War.”

Peyton Walters served as a district director for Rep. Charlie Wilson and credits Simpson with ensuring Wilson’s mission of “taking care of the home folks” was accomplished.

“He ran a good office for Charlie,” Walters said. “He was an all-around great man.”

Simpson leased an RV from Foretravel in Nacogdoches for use as a mobile office. Wilson was the first congressman to deploy a mobile office. Staff traveled the huge congressional district and handled the largest number of constituent services case files of any Representative or Senator, Walters said.

Wilson was able to pass the enabling legislation in his first term, largely due to his close relationship with Arthur Temple.

Charles William Simpson was born May 1, 1936, in Wichita Falls. After attending college off and on while working at his father’s dirt contracting business, he graduated with a degree in political science in 1963. After earning a doctorate from the University of Texas he became Stephen F. Austin State University’s first full-time political science professor

While in Nacogdoches he was influential in establish the first desegregated Boy Scout troop and became active in political campaigns.

He became involved with Wilson because a graduate student wanted to do a project on a local politician, he told Simpson told Stephen F. Austin University researchers in 2012.

“If I hadn’t gotten some people together and if Arthur Temple hadn’t come over and set up a meeting to raise a little money for him, (the Wilson campaign) wouldn’t have done anything,” Simpson told interviewer Dr. Scott Sosebee.

After winning election, Wilson asked Simpson if he would be interested in running his office. Simpson agreed after consulting with his family.

“There were four or five nights when I was almost afraid to leave him alone,” he’s quoted as saying in “Charlie Wilson’s War.” “He was that low, drinking straight vodka in the office. Just him and me.”

Wilson’s infamous hit-and-run crash on Key Bridge in Washington on Aug. 13 1983 was the final straw for Simpson. Simpson had put out his last fire for Wilson.

Soon after he left for Lloyd Bentsen’s staff. He stayed with Bentsen for three years before joining the law and lobbying firm Lipsen, Whitten and Diamond and was later a corporate executive for engineer and construction giant Morrison Knudsen.

An usher passes out tithing envelopes during a drive-in church service at Iron Wheel Baptist Church in May 2020. The church will host a drive-in service honoring Dr. Martin Luther King Jr. at noon Saturday.

The church at 820 First St. will host a drive-in service commemorating King at noon Saturday. The church has hosted at least one drive-in service weekly since the beginning of the COVID-19 pandemic, said its pastor, the Rev. James Ervin.

“Everybody can just sit in their cars. It’s safer that way,” Ervin said.

The service is an annual occurrence at Iron Wheel, but it was canceled last year because of the uncertainty surrounding the coronavirus pandemic. Instead, members of the Nacogdoches Ministerial Alliance encouraged pastors to preach about King’s legacy on the Sunday before Martin Luther King Jr. Day.

“With him leading the civil rights struggle for equality, we want to continue to remember that legacy. We don’t want to forget where we come from,” Ervin said. “It’s not good for us to forget our history. When you forget history, you are going to repeat it. During this time of COVID, it’s essential to remember where we come from.”

The Rev. Charles Johnson of Pastors for Texas Children will be the featured guest speaker.

“I’m going to talk about Dr. King’s legacy and how it applies to our present mission and witness,” Jonson said. “The Gospels are about one human family and a love for all people, who should be judged on the content of their character and not the color of their skin.”

King also focused heavily on uniting as a community, which is as important today as ever, Johnson said.

“I think we get a little hoodwinked into thinking we’ve got to be Dr. King and preach with the power of Amos in a pulpit. No. No No. We’ve just got to be a good neighbor, and we have to do that,” he said. “We have to connect down the street and then across the block and then in the association and then downtown. We have to start where we are and go out from there.”

Pastors for Texas Children is one of the largest faith-based organizations focused on promoting public education.

“We endorse private schools also, but we believe public schools are the model that accepts every child,” Johnsons aid.

Following the ceremony, cars at the church will parade though town to Star of Hope Baptist Church, 2305 Looneyville Road.

“We’ll give out signs and it’s that core group from the church that’ll be in that parade,” said Sandy McCorvey, parade organizer.

“The whole idea is to try to hit some of the streets within the Black community and bring memories back to what Dr. King did for this community and all communities,” McCorvey said.

Citing concern over recent spread of COVID-19, two committees appointed in late 2021 to work on goals for the city’s downtown master plan and comprehensive plan have moved their meetings to a virtual format.

Each steering committee is composed of approximately 20 members appointed by city council.

City council and staff more than a year ago began discussing updates to the city’s comprehensive plan, a document designed to guide growth and development over the next 20 to 30 years. Nacogdoches’ comprehensive plan was last updated in 2003, and the 2022 update — which is expected to take 12 to 18 months — would include an Interstate 69 corridor study and housing needs assessment. The steering committee for the comprehensive plan includes council members Kathleen Belanger and Roy Boldon.

Expected to take 9 to 12 months to compile, the downtown master plan also guides development over the next several decades. A master plan for downtown Nacogdoches was completed by a Dallas-based firm in 1974, but never implemented. Serving on the steering committee for the downtown plan are council members Amelia Fischer and Jay Anderson.

Both steering committees held initial in-person meetings in December, through contracts to compile the studies have not yet been approved. After vetting proposals and holding interviews in 2021, city council narrowed a list of potential outside firms to one finalist to complete both the downtown and comprehensive plans. The council is expected to consider contracts with Boulder, Colo.-based DTJ Design, which has offices in Austin and Dallas, for both the city’s comprehensive plan update and downtown master plan. The cost of both plans has been estimated at $450,000.

For more information on both plans, including copies of the current comprehensive plan and 1974 downtown plan, visit nacogdochesplans.com.

Nacogdoches County neared a record level of active COVID-19 cases Tuesday as the highly contagious omicron variant of the coronavirus spreads like wildfire.

Texas Department of State Health Services reported 755 active cases Tuesday morning, close to double the cases reported a week ago. That number takes into account lab confirmed tests and antigens tests. It does not include home tests.

“We’re well on our way to being where we were in September, but our hospitalizations are still better than they were,” said Nacogdoches Fire Chief Keith Kiplinger. “They’re not anywhere near where they were and that’s a good thing.”

Active COVID-19 cases — those where the patient is still considered contagious — peaked at 778 on Sept. 16 as the delta variant of the virus ran roughshod over the community. Intensive care units around the region were overwhelmed with COVID-19 patients.

On Tuesday, 23 patients were hospitalized with COVID-19 in Nacogdoches County, seven of them in intensive care.

“I don’t think we’re going to see the numbers quit going up until around the 20th. I think around the end of next week it might start slowing down but I might be wrong,” Kiplinger said.

The omicron variant of the virus appears to be the most contagious yet and is often sickening people who have been vaccinated. Reports from the World Health Organization indicate the variant reduces most vaccine effectiveness to 30% while other vaccines are totally ineffective.

The organization reports that boosters can raise effectiveness up to 75%.

Symptoms, however, seem to be milder than previous variants. In the United Kingdom and South Africa, where the variant spread before making its way to the United States, studies found between 30 and 70% fewer people required hospitalization.

Vaccines and boosters are widely available throughout Nacogdoches.

The city hosts vaccine clinics on Fridays at the CL Simon Recreation Center, 1112 North St. Anyone who has been exposed to COVID-19 or recovered from the disease should wait at least 14 days before receiving a booster or vaccine.

The period extends to 90 days for people who have received monoclonal antibody treatment.

Clardy, a Nacogdoches attorney, sent district representative Jerri Jones to speak in his stead while primary challengers Greg Caldwell, Rachael Hale and Mark Williams made pitches to more than 120 voters during the lunch meeting of Nacogdoches Republican Women.

Clardy first tested positive in August during a surge of the delta variant of the virus. He has previously told The Daily Sentinel that he is fully vaccinated.

The omicron variant has been widely sickening vaccinated people, though symptoms appear to be milder than previous variants of the virus.

Precinct 4 justice of the peace candidate Brian Moreau sent a message to group that he and his wife both had COVID-19, Nacogdoches County Republican Women’s Susan Aikin announced. His opponents Joey Evans, Cindy Maddox, and James Carpenter spoke to the crowd. Candidate Jimmy Marble did not attend.

Griffin will hold office until Perkins’ successor is elected. The winner of the Republican Primary will face Democrat the Rev. James Ervin in November.

Current clerk June Clifton will retire at the end of her term and has endorsed Yates.

In the race for state representative, Hale, Caldwell and Williams spoke against government ordered shutdowns in 2020 meant to slow the spread of COVID-19 during the early days of the pandemic.

Only one local candidate — incumbent Precinct 4 Commissioner Mark Harkness — spoke directly about the challenges of governing during a pandemic.

“We’ve faced some really tough things. One of those is the pandemic. No one saw that coming. It’s been trying to stay the least,” he said.

One of his opponents, retired county worker Roy Self, made a brief introduction, while Scott Hasley did not attend.