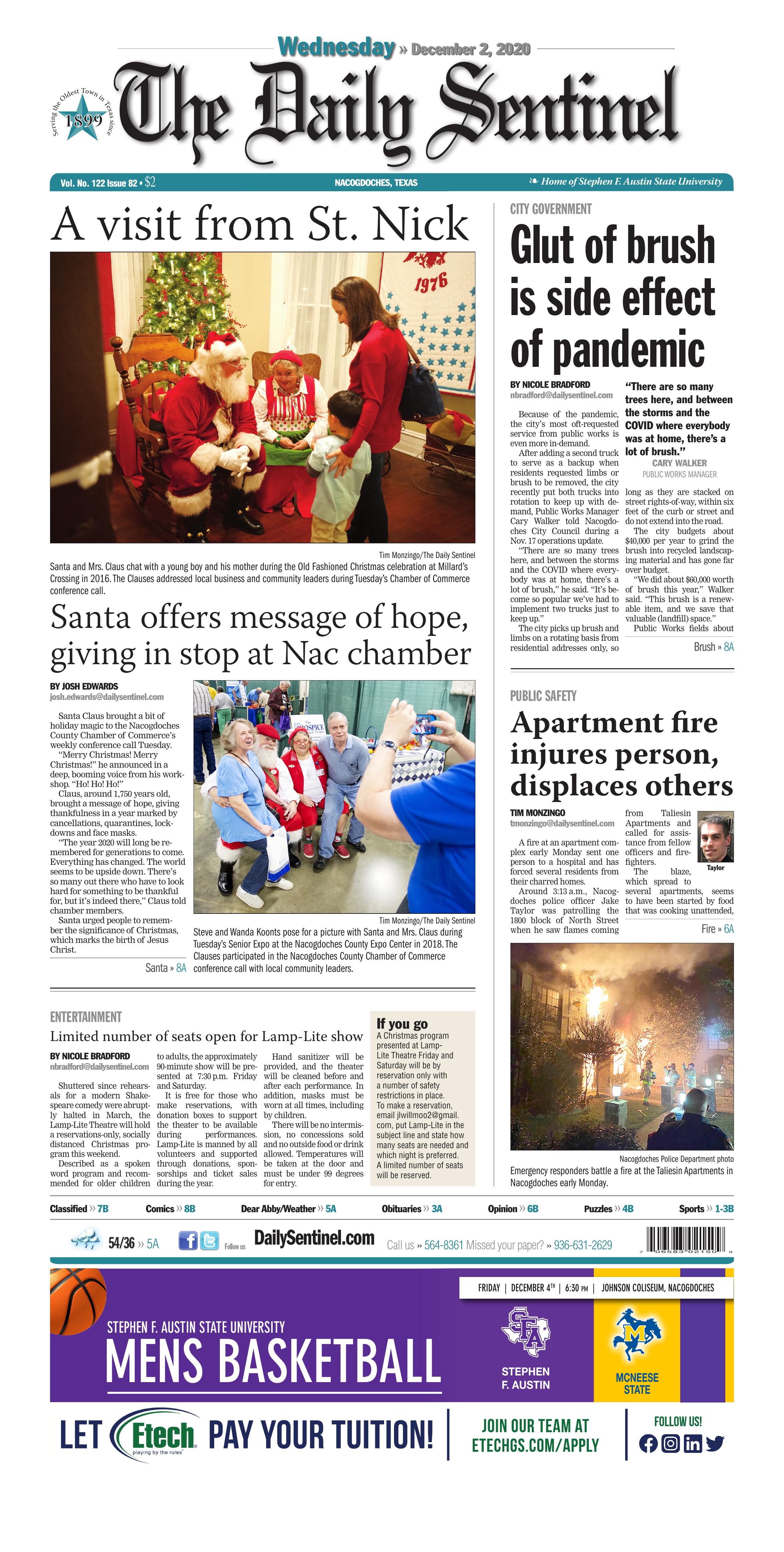 Santa and Mrs. Claus chat with a young boy and his mother during the Old Fashioned Christmas celebration at Millard’s Crossing in 2016. The Clauses addressed local business and community leaders during Tuesday’s Chamber of Commerce conference call.

Claus, around 1,750 years old, brought a message of hope, giving thankfulness in a year marked by cancellations, quarantines, lockdowns and face masks.

“The year 2020 will long be remembered for generations to come. Everything has changed. The world seems to be upside down. There’s so many out there who have to look hard for something to be thankful for, but it’s indeed there,” Claus told chamber members.

Santa urged people to remember the significance of Christmas, which marks the birth of Jesus Christ.

“He’s the greatest gift giver for us all. Gift giving is the main message of the season. As we enter the 10th month of the pandemic it’s wonderful to recognize how many gift givers we have out there doing so much,” Santa said. “Just think about all the free food and merchandise distribution being done each day for the needy. That actually makes each one of them a little Santalike.”

Santa acknowledges that he needs help completing his mission and that children notice multiple Santas at different locations in December.

“I deliver those toys with a sleigh on Christmas Eve. But you also have to realize that Santa needs help in seeing those children before making that delivery. Therefore, I created a group of helpers to meet the face to face needs around the world,” he said. “The helpers cannot tell who the real Santa is, or their beards will fall out.”

“Santa is exempt from this because Santa, of all the good qualities, has a lot of good innate immunity,” Fauci said.

But that doesn’t stop St. Nick’s team of helpers from needing protection. Santa must use protection to make him indistinguishable from the men he’s enlisted to assist in his worldwide gift-giving mission.

“We personally know of two Santas who have COVID right now, one who has passed away and one who has spent three weeks in the hospital, most of it in ICU,” Santa told the chamber. “The Santa family is very vulnerable for our age and health condition. We’re a magnet for the young and avoiding close crowding is impossible.”

Shuttered since rehearsals for a modern Shakespeare comedy were abruptly halted in March, the Lamp-Lite Theatre will hold a reservations-only, socially distanced Christmas program this weekend.

Described as a spoken word program and recommended for older children to adults, the approximately 90-minute show will be presented at 7:30 p.m. Friday and Saturday.

It is free for those who make reservations, with donation boxes to support the theater to be available during performances. Lamp-Lite is manned by all volunteers and supported through donations, sponsorships and ticket sales during the year.

Hand sanitizer will be provided, and the theater will be cleaned before and after each performance. In addition, masks must be worn at all times, including by children.

There will be no intermission, no concessions sold and no outside food or drink allowed. Temperatures will be taken at the door and must be under 99 degrees for entry.

For reservations or questions, email jlwillmoo2@gmail.com and include Lamp-Lite in subject line.

The theater, 4210 Lamp-Lite Lane, is off Old Tyler Road just before the Loop 224 exit ramp.

A Christmas program presented at Lamp-Lite Theatre this Friday and Saturday will be by reservation only with a number of safety restrictions in place. To make a reservation, email jlwillmoo2@gmail.com, put Lamp-Lite in the subject line and state how many seats are needed and which night is preferred. A limited number of seats will be reserved.

Local
'Lots of brush' a side effect of pandemic

Because of the pandemic, the city’s most oft-requested service from public works is even more in-demand.

After adding a second truck to serve as a backup when residents requested limbs or brush to be removed, the city recently put both trucks into rotation to keep up with demand, Public Works Manager Cary Walker told Nacogdoches City Council during a Nov. 17 operations update.

“There are so many trees here, and between the storms and the COVID where everybody was at home, there’s a lot of brush,” he said. “It’s become so popular we’ve had to implement two trucks just to keep up.”

The city picks up brush and limbs on a rotating basis from residential addresses only, so long as they are stacked on street rights-of-way, within six feet of the curb or street and do not extend into the road.

The city budgets about $40,000 per year to grind the brush into recycled landscaping material and has gone far over budget.

“We did about $60,000 worth of brush this year,” Walker said. “This brush is a renewable item, and we save that valuable (landfill) space.”

Public Works fields about 400 calls per week about everything from potholes to streetlight outages. The department also maintains the city’s 328-acre landfill, which takes in about 1,200 tons of garbage weekly. Initially permitted to operate in 1976, the landfill has about 21 years of life expectancy left, though a plan is in the works to extend that.

“The landfill is very important. It’s owned by the city, and there’s a lot of income and revenue there,” Walker said.

Just like in more rural areas of the county, illegal dumping inside the city continues to be a problem, particularly at commercial dumpsters, where tires and mattresses materialize under cover of darkness.

“A lot of our businesses unfortunately get stuck with the bill for somebody that didn’t want to play by the rules,” Walker said. “We also have illegal dumping in roadways, and parks are really popular. A lot of dead end streets get hit pretty hard. And we are catching some of them.”

Public Works has 14 employees who work where they are needed most on any particular day, City Engineer Steve Bartlett explained, meaning that flooding or even a festival can pull staff from regular duties.

“Brush, sweeping, pothole repair — all those guys move over,” Bartlett said. “If your leaves are still bagged on your front porch, sometimes it’s because we’ve got an all-hands-on-deck in another area.”

Future plans, he said, include outsourcing work such as paving, which requires a 10-member crew when done by the city in house.

“We do that now to the tune of $1 million or more a year and we’re going to try to keep the street crews in doing just our local parks or (smaller projects) where they could stop halfway through and tend to an emergency,” he said.

In addition, the possibility of adding staff and equipment will likely be brought up in the city’s next budget cycle, as the department is working with the city manager to assess future needs.

“We are always seeking ways to increase our level of service,” Bartlett said, “and I think in this case we might have to up what we’re doing in order to keep doing that.”

Emergency responders battle a fire at the Taliesin Apartments in Nacogdoches early Monday.

A kitchen fire at the Taliesin Apartments in Nacogdoches early Monday morning damaged several apartments and displaced residents. One person was treated for minor injuries at a local hospital, according to the Nacogdoches Police Department.

A fire at an apartment complex early Monday sent one person to a hospital and has forced several residents from their charred homes.

Around 3:13 a.m., Nacogdoches police officer Jake Taylor was patrolling the 1800 block of North Street when he saw flames coming from Taliesin Apartments and called for assistance from fellow officers and firefighters.

The blaze, which spread to several apartments, seems to have been started by food that was cooking unattended, according to a statement issued by the Nacogdoches Police Department Monday morning.

“The resident advised he awoke to his smoke alarm going off and was able to get out of the apartment,” the statement said. “There were multiple apartments that were completely burned and numerous residents have been displaced.”

Some residents were rescued via ladder trucks from upstairs balconies, according to Monday’s news release.

One person suffered minor injuries and was taken to a local hospital for treatment.

The Stephen F. Austin State University Police Department ferried displaced residents to other locations to get them out of the cold weather, and other accommodations for the renters have been made at local hotels through the Red Cross.

The Central Heights and Lufkin fire departments also responded to assist the Nacogdoches Fire Department in battling the blaze, according to NPD.