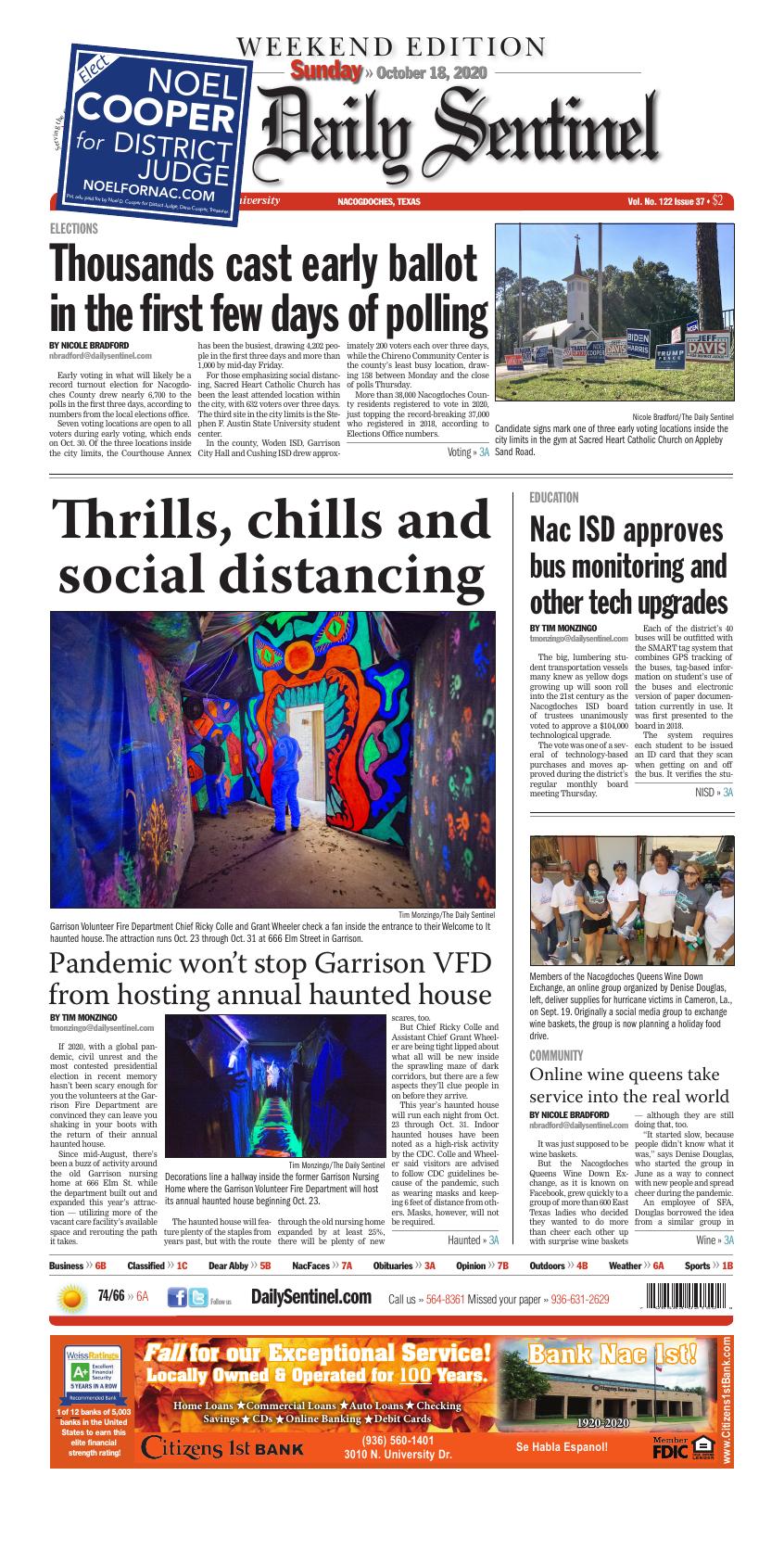 Candidate signs mark one of three early voting locations inside the city limits in the gym at Sacred Heart Catholic Church on Appleby Sand Road.

Early voting in what will likely be a record turnout election for Nacogdoches County drew nearly 6,700 to the polls in the first three days, according to numbers from the local elections office.

Seven voting locations are open to all voters during early voting, which ends on Oct. 30. Of the three locations inside the city limits, the Courthouse Annex has been the busiest, drawing 4,202 people in the first three days and more than 1,000 by mid-day Friday.

For those emphasizing social distancing, Sacred Heart Catholic Church has been the least attended location within the city, with 632 voters over three days. The third site in the city limits is the Stephen F. Austin State University student center.

In the county, Woden ISD, Garrison City Hall and Cushing ISD drew approximately 200 voters each over three days, while the Chireno Community Center is the county’s least busy location, drawing 158 between Monday and the close of polls Thursday.

More than 38,000 Nacogdoches County residents registered to vote in 2020, just topping the record-breaking 37,000 who registered in 2018, according to Elections Office numbers.

As far as early voting, it’s difficult to compare the turnout to prior elections, County Elections Administrator Todd Stallings said.

“This year is so different due to early voting being a week longer, plus we are having more extended hours than ever before at the annex,” he said. “It would not be apples to apples.”

More than 2,600 mail ballots have been sent to county residents, and about 100 per day are coming in this week, Stallings said. The deadline to apply for a mail ballot is Oct. 23. Applications are available at nacvotes.com or by calling 936-560-7825.

In addition to a the presidential race between incumbent Republican Donald J. Trump and Democratic challenger Joe Biden are several federal, state and local elections. On the county level, Republican Jeff Davis, the Nacogdoches city attorney, and Democrat Noel Cooper, an attorney in private practice, are vying to replace retiring State District Judge Campbell Cox, who has been on the bench since 2001.

Some ballots will include races postponed from May due to the pandemic. Appleby voters will decide if businesses within the city may sell alcoholic beverages, while Garrison residents will decide two city council positions and five school board races.

Straight party voting has been eliminated, so voters need to mark their preferred candidate in each contest, and ballots will have contests on both the front and back. More information is available at NacVotes.com.

Garrison Volunteer Fire Department Chief Ricky Colle and Grant Wheeler check a fan inside the entrance to their Welcome to It haunted house. The attraction runs Oct. 23 through Oct. 31 at 666 Elm Street in Garrison.

Fluorescent painted walls and decorations glow beneath a black light set up inside the Garrison Volunteer Fire Department’s haunted house. Housed in the former Garrison Nursing Home location at 666 Elm Street, the haunted house will open Oct. 23 and runs through Oct. 31.

A brightly painted doorway ushers visitors to the Garrison Volunteer Fire Department into the actual entrance to their haunted house, which opens Oct. 23.

If 2020, with a global pandemic, civil unrest and the most contested presidential election in recent memory hasn’t been scary enough for you the volunteers at the Garrison Fire Department are convinced they can leave you shaking in your boots with the return of their annual haunted house.

Since mid-August, there’s been a buzz of activity around the old Garrison nursing home at 666 Elm St. while the department built out and expanded this year’s attraction — utilizing more of the vacant care facility’s available space and rerouting the path it takes.

The haunted house will feature plenty of the staples from years past, but with the route through the old nursing home expanded by at least 25%, there will be plenty of new scares, too.

But Chief Ricky Colle and Assistant Chief Grant Wheeler are being tight lipped about what all will be new inside the sprawling maze of dark corridors, but there are a few aspects they’ll clue people in on before they arrive.

This year’s haunted house will run each night from Oct. 23 through Oct. 31. Indoor haunted houses have been noted as a high-risk activity by the CDC. Colle and Wheeler said visitors are advised to follow CDC guidelines because of the pandemic, such as wearing masks and keeping 6 feet of distance from others. Masks, however, will not be required.

On Halloween night, from 5 p.m. to 7 p.m., the department will also host a trunk-or-treat event at the station adjacent to city hall and the haunted house, Colle said. Trunk or Treat events, too, have been called high-risk activities by the CDC.

They’ve got more than 30 actors and volunteers, from firefighters to high school students and even the city’s mayor, who’ll staff the venue from 7 p.m. to midnight on weekends and from 7 to 10 p.m. on weeknights.

Businesses have kicked in to sponsor the event, providing money for props and supplies.

Last year’s event drew more than 800 people to Garrison — some from as far away as Houston, Dallas and even Tennessee — and pumped about $10,000 into the department’s bank account. The proceeds are used to update and maintain equipment and pay for training.

The department recently purchased a fully-equipped truck from a station in Illinois, and proceeds from this year’s event will help cover the cost of that addition. Colle said one of the department’s long-term goals is to open a substation in the town as it continues to grow.

“Our department has grown with the community,” Wheeler said.

Outside the haunted house, they’ll offer caricatures for people to take photos with, but they won’t be offering food this year, which is a departure from past years.

“We try to make it a community event,” Colle said. “A lot of communities don’t do a lot like they used to. There’s been a push out here the last two years for community events.”

The big, lumbering student transportation vessels many knew as yellow dogs growing up will soon roll into the 21st century as the Nacogdoches ISD board of trustees unanimously voted to approve a $104,000 technological upgrade.

The vote was one of a several of technology-based purchases and moves approved during the district’s regular monthly board meeting Thursday.

Each of the district’s 40 buses will be outfitted with the SMART tag system that combines GPS tracking of the buses, tag-based information on student’s use of the buses and electronic version of paper documentation currently in use. It was first presented to the board in 2018.

The system requires each student to be issued an ID card that they scan when getting on and off the bus. It verifies the student is on the right bus and alerts the driver if that isn’t the case, according to the system’s developer, Georgetown-based Secured Mobility, LLC. Parents will be able to opt into the system to track what bus their child is on, where they boarded and disembarked from the bus.

The system will also maintain limited medical information about students “to ensure they received the property care” according to the company.

Deputy Superintendent Michael Martin said while the district already has GPS tracking for it’s bus fleet through another program, combining that tracking with the other features offered via SMART tag would save the district about $17,000 per year.

The program requires an initial upfront investment of more than $104,000 and carries an annual cost of $17,411.

The new system should help the district contact parents, which was a major selling point.

“One of the main issues we have as an administrator is trying to contact those parents as quickly as possible to let them know,” Martin said. “This is a very valuable piece of the program here.”

Another significant expense the district voted to take on is a contract with the Longview-based Absolute Technology Solutions, LLC, to perform IT work within the district.

The company has already worked with the district and helped prepare newly installed tech in classrooms and prepare a the laptops and tablets distributed to students before school began over the summer.

The board voted unanimously to approve a contract with the company for between $113,000 and $180,000 — a cost which had already been accounted for in the budget.

The partnership ideally will help solve problems the district has had with its various programs and technologies communicating and working together effectively, which was among the issued brought up Thursday night by the sole person to speak during the public comment period of the meeting.

Trustee Leabeth Abt, a former Nacogdoches High School teacher, brought up the same concern during the boards agenda review on Oct. 13. Martin said the matter is already being fixed.

“They’ve already integrated existing systems we’ve had problems with in the past,” he said.

The board also approved spending $49,900 on tablet computer-based temperature checking stations to help streamline screening visitors and staff members at campuses for signs of illness.

The kiosks will be deployed throughout the district, with at least one at each of the elementary schools, two to three of the machines at the middle schools, up to four at the high school and one at Malcolm Rector Technical High School.

The devices would also be set up at busy off-campus sites, like the district support center, Martin said.

The cost would be covered by federal money provided to the district as part of the coronavirus relief package passed earlier this year by Congress.

It was just supposed to be wine baskets.

But the Nacogdoches Queens Wine Down Exchange, as it is known on Facebook, grew quickly to a group of more than 600 East Texas ladies who decided they wanted to do more than cheer each other up with surprise wine baskets — although they are still doing that, too.

“It started slow, because people didn’t know what it was,” says Denise Douglas, who started the group in June as a way to connect with new people and spread cheer during the pandemic.

An employee of SFA, Douglas borrowed the idea from a similar group in her hometown of Carthage. After it quickly grew to an online group of women who regularly surprise one another with wine and gift baskets, one of them suggested they spread their goodwill even more.

“One of the members suggested that since we are trying to spread love and uplift people, who don’t we do this?” said Douglas, who posted the idea on the group’s private Facebook page.

Response was sure and swift: “I’m in,” some members chimed in. “Let’s do it,” wrote others.

At the time, Hurricane Laura was bearing down on the Louisiana Coast. Thus, two of the group’s retired members held a drive for flashlights and batteries, laundry detergent and other requested supplies at Pecan Park. Afterward, seven members embarked on a weekend trip to deliver the donations to relief efforts in Cameron, La.

It was gratifying, Douglas recalled, to come together on short notice and help strangers.

Service projects will continue. The group this month is organizing a local food drive and Douglas hopes to plan a project for Christmas.

“These women have gone beyond a bottle of wine,” she says.

Nacogdoches Queens Wine Down Exchange is open to ladies age 21 and up willing to regularly assemble and deliver gift baskets to fellow members. 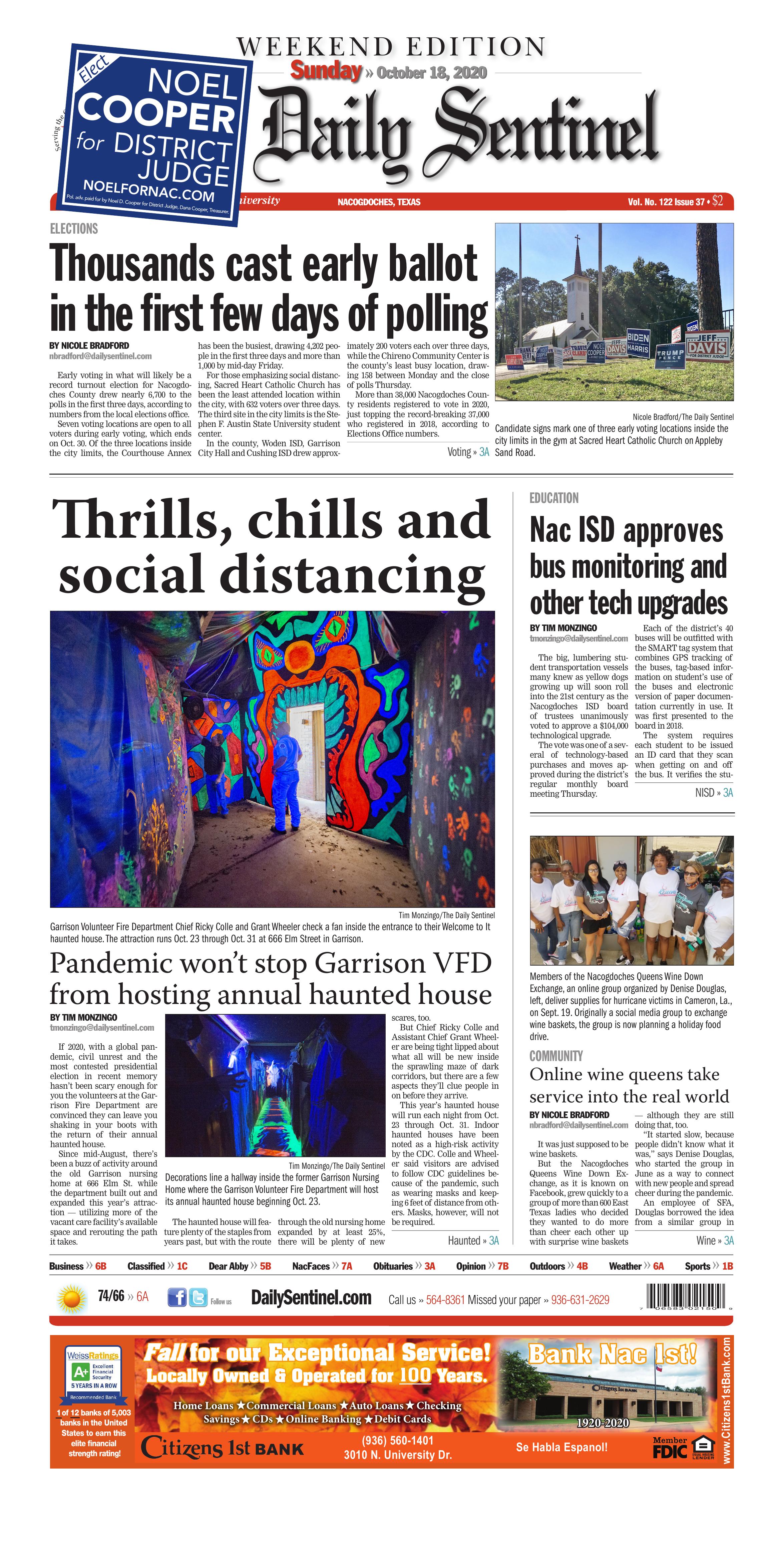