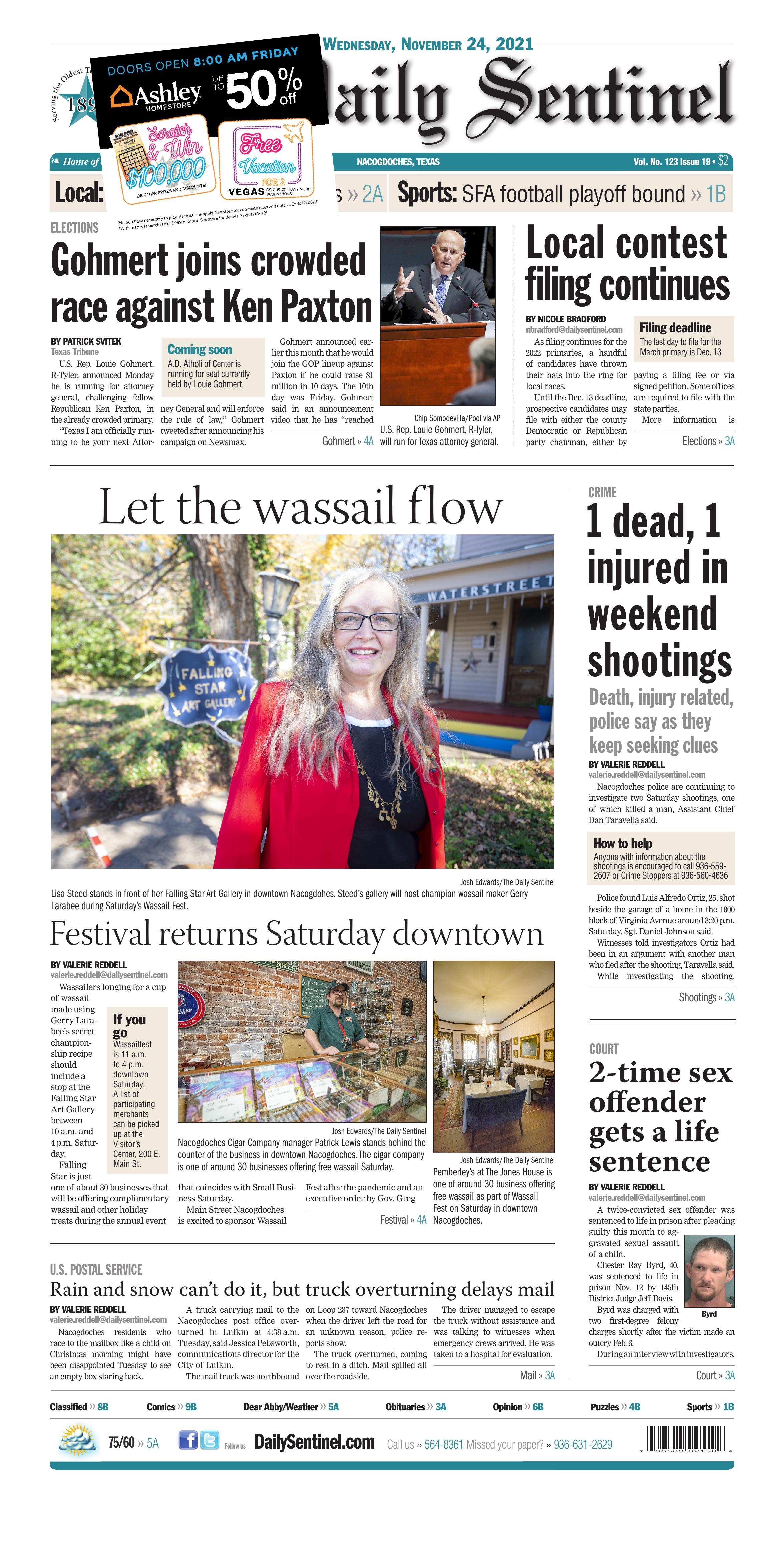 “Texas I am officially running to be your next Attorney General and will enforce the rule of law,” Gohmert tweeted after announcing his campaign on Newsmax.

Gohmert announced earlier this month that he would join the GOP lineup against Paxton if he could raise $1 million in 10 days. The 10th day was Friday. Gohmert said in an announcement video that he has “reached our initial goal of raising $1 million in order to start a run for” attorney general, though he did not confirm whether he was able to collect it in 10 days.

New district lines will be used for the first tine in next year’s primary. Gohmert does not have to resign from Congress to run for attorney general. The District 1 seat is up for election in 2022, and Gohmert had not filed for reelection to Congress as of Tuesday, according to the Texas Secretary of State’s office.

Gohmert is at least the fourth primary opponent that Paxton has drawn. The others have included Land Commissioner George P. Bush, former Texas Supreme Court Justice Eva Guzman and state Rep. Matt Krause of Fort Worth. At least three Democrats are also running for the job.

However, shortly after Gohmert’s announcement Monday evening, Krause said he was leaving the primary to instead run for Tarrant County district attorney. Krause said he planned to support Gohmert for attorney general.

The race has attracted intense interest due to Paxton’s legal problems, which include a 2015 securities fraud indictment that remains pending. Paxton has also come under FBI investigation over claims by former top staffers that he abused his office to help a wealthy donor. He has denied wrongdoing in both cases. Gohmert has latched on to those legal issues, warning they could cause Paxton to lose the general election.

In the announcement video, Gohmert called “election integrity” a priority of his campaign and criticized Paxton, saying he only “started working harder” after the allegations by his former lieutenants.

“If you allow me, I will not wait to be my busiest until after there’s some bad press about illegal improprieties,” Gohmert said. “I’ll start boldly protecting your rights on Day 1.”

Gohmert was originally scheduled to announce his decision Friday on Mark Davis’ radio show in Dallas, but he never called in and the show went off air without hearing from him. He also kept the political world in suspense Monday, tweeting in the morning that he would release an announcement video “later today.” It was not until after 7:30 p.m. that he announced his decision — and first on Newsmax, the conservative outlet, before releasing the video as promised.

Gohmert is one of the most far-right members of Congress and an ardent supporter of former President Donald Trump, who has endorsed Paxton for another term. After Trump lost reelection last year, Gohmert filed a long-shot lawsuit asking former Vice President Mike Pence to challenge Joe Biden’s legitimacy as president-elect.

When a federal court dismissed the suit, he appeared to suggest violence in response, which he later denied. Gohmert has downplayed the deadly riot that broke out at the U.S. Capitol on Jan. 6 when a mob of Trump supporters stormed the building. Gohmert also has sought — unsuccessfully — to visit the defendants from the riot in jail.

Nacogdoches Cigar Company manager Patrick Lewis stands behind the counter of the business in downtown Nacogdoches. The cigar company is one of around 30 businesses offering free wassail Saturday.

Pemberley’s at The Jones House is one of around 30 business offering free wassail as part of Wassail Fest on Saturday in downtown Nacogdoches.

Pemberley’s at The Jones House is one of around 30 business offering free wassail as part of Wassail Fest on Saturday in downtown Nacogdoches.

Wassailers longing for a cup of wassail made using Gerry Larabee’s secret championship recipe should include a stop at the Falling Star Art Gallery between 10 a.m. and 4 p.m. Saturday.

Falling Star is just one of about 30 businesses that will be offering complimentary wassail and other holiday treats during the annual event that coincides with Small Business Saturday.

Sowell also pointed out that holiday shoppers can eliminate worries about supply chain issues by visiting downtown merchants who have so many great gifts to offer.

Shoppers are welcome to sample as much wassail as they like as they move among the merchants in Nacogdoches historic district.

Maps and ballots will be available at the Visitor’s Center, 200 E. Main St.

Larabee is the reigning wassail champion, Sowell said. And, although Larabee’s Heart of Texas store is closed, she is schedule to be at the gallery helping to distribute her popular holiday concoction.

Her wassail is often described as liquid apple pie. While the precise recipe is a closely guarded secret, Larabee has previously admitted to including a mulling spice and a blend of juices.

Visitors are encouraged to stop by each of the participating businesses and speculate on what other secret ingredients are being used. Be sure to cast your ballot to determine the winner of the People’s Choice Award.

Judges will be stopping by each participating business to determine other winners.

• The Shop at Fredonia

• Pemberly’s at The Jones House

Wassailfest is 11 a.m. to 4 p.m. downtown Saturday. A list of participating merchants can be picked up at the Visitor's Center, 200 E. Main St.

Letters and packages were scattered alongside a truck carrying mail from a processing center to Nacogdoches early Tuesday morning. The truck overturned on Loop 287.

A mail truck overturned on Loop 287 in Lufkin at 4:38 a.m. Tuesday. The driver avoidied serious injury, but mail delivery to Nacogdoches will be delayed while postal employees re-sort the letters and packages.

Nacogdoches residents who race to the mailbox like a child on Christmas morning might have been disappointed Tuesday to see an empty box staring back.

A truck carrying mail to the Nacogdoches post office overturned in Lufkin at 4:38 a.m. Tuesday, said Jessica Pebsworth, communications director for the City of Lufkin.

The mail truck was northbound on Loop 287 toward Nacogdoches when the driver left the road for an unknown reason, police reports show.

The truck overturned, coming to rest in a ditch. Mail spilled all over the roadside.

The driver managed to escape the truck without assistance and was talking to witnesses when emergency crews arrived. He was taken to a hospital for evaluation.

A spokesman for the U.S. Postal service said all the mail had been collected by 9:45 a.m., but it would have to be returned to a processing facility to be resorted.

“The safety and well-being of both customers and employees is of the utmost importance to the U.S. Postal Service, said Albert Ruiz with the postal service in Dallas. “We can report that no one was seriously injured in today’s accident involving a contract mail truck. All mail and packages were recovered immediately and the Postal Service is taking steps to ensure prompt delivery. Some of the mail may need to be returned to our mail processing facility to be resorted and will be delivered tomorrow. We appreciate the patience of our customers and apologize for any inconvenience they may experience.”

As filing continues for the 2022 primaries, a handful of candidates have thrown their hats into the ring for local races.

Until the Dec. 13 deadline, prospective candidates may file with either the county Democratic or Republican party chairman, either by paying a filing fee or via signed petition. Some offices are required to file with the state parties.

More information is available from either local party chairman or the elections office, 936-560-7825.

Republican Precinct 4 County Commissioner Mark Harkness also has filed for reelection and is being challenged by retiree Roy Self.

In the County Judge race, incumbent Greg Sowell has filed for reelection in the Republican primary with no challengers.

Precinct 1 Justice of the Peace Kerry Don Williamson has filed for reelection in the Republican primary, facing challenger Tyrone Spencer.

“We have a few others in the works,” Strong added.

Both Strong and Reynolds are seeking to retain their positions as party chairs.

County Court at Law Judge Jack Sinz has stated his intention to file for reelection in the Republican primary. Assistant county attorney Paige Pattillo in August announced her intention to file in the county court at law judge race.

Nacogdoches police are continuing to investigate two Saturday shootings, one of which killed a man, Assistant Chief Dan Taravella said.

Police found Luis Alfredo Ortiz, 25, shot beside the garage of a home in the 1800 block of Virginia Avenue around 3:20 p.m. Saturday, Sgt. Daniel Johnson said.

Witnesses told investigators Ortiz had been in an argument with another man who fled after the shooting, Taravella said.

While investigating the shooting, officers were called to an apartment complex at 1630 Cardinal St. where another man had a gunshot wound. That man, who police have not publicly identified, was taken to a hospital in serious condition Saturday. An update on his condition was not available Tuesday.

The two shootings are believed to be related, Johnson said Tuesday.

Detectives are encouraging anyone with information about this incident to call the Nacogdoches police at 936-559-2607 or Crime Stoppers at 936-560-4636. Crime Stoppers will pay a cash reward of up to $1,000 for the first and best tip leading to the arrest of a felony suspect. Callers remain anonymous and do not have to testify in court.

A twice-convicted sex offender was sentenced to life in prison after pleading guilty this month to aggravated sexual assault of a child.

Byrd was charged with two first-degree felony charges shortly after the victim made an outcry Feb. 6.

During an interview with investigators, the child said Byrd assaulted them on multiple occasions — most recently two weeks before the outcry, according to an arrest affidavit filed against Byrd.

Byrd was questioned at his home Feb. 10 and admitted assaulting the victim, the affidavit said. He has been in the Nacogdoches County jail since his arrest.

In 2008, Byrd was sentenced to four years in prison for the sexual assault of a 15-year-old girl, according to the Texas Sex Offender Registry.

In other district court action, 420th District Judge Ed Klein sentenced Kelli Rene Goodin to 30 years in prison Oct. 14 for each of two counts of aggravated sexual assault of a child.

Goodin is the second of three suspects arrested at a Nacogdoches hotel in September 2019 to plead guilty to charges filed in the incident. Arrested with Goodin were Mark Allen Thompson and Frankie Dale Mealer Jr. for introducing the child victims to drugs then sexually assaulting the children several times. Both victims were under age 15.

Goodin has been moved from the county jail to the Mountain View unit in Gatesville. Court documents show she was given 693 days for the time she was held in county jail while the charges were pending.

Goodin also was sentenced to 10 years in prison for hindering apprehension and two years for child endangerment. All sentences will run concurrently.

Mealer remains in custody at the Nacogdoches County Jail on bail totaling $3 million on four first-degree felony charges for aggravated sexual assault of a child.

Thompson was sentenced to life in prison in July after he pleaded guilty to one of the 22 felony charges filed against him. He is confined at the Coffield Unit northwest of Palestine and won’t become eligible for parole until September 2054.

After completing their sentences, all three will be required to register with the sex offenders’ registry every year for the rest of their life.