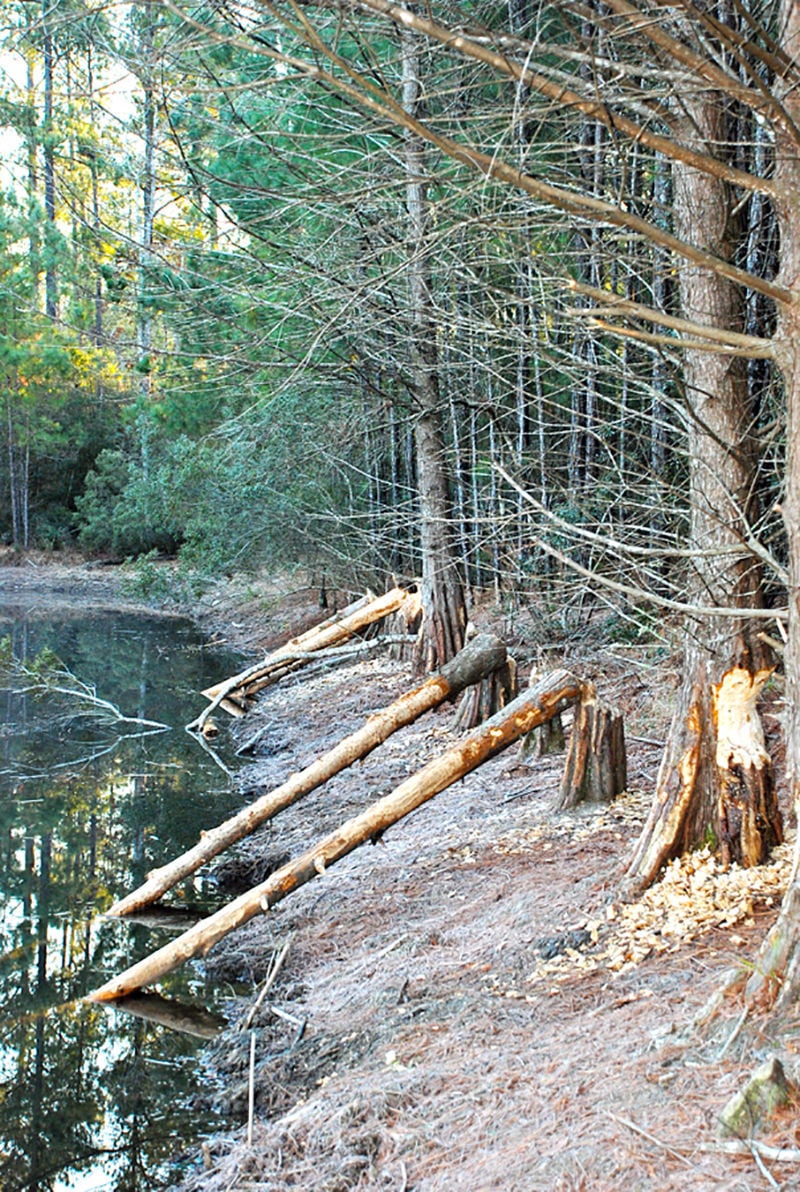 This is what beavers did when they really put their mind to it along a Neches River tributary in East Texas. When they have taken the tree down they strip the inner bark for food and use branches for dam construction.

More than ten years ago, Dr. Frances “Ab” Abernethy called me about beavers. He is since deceased, but was a fabled historian, folklorist, trail builder and professor emeritus of English at Stephen F. Austin State University in Texas He told me that these buck-toothed hydrological engineers were moving right into town along Lanana and Bonita creeks, chopping down trees up to 10-12 inches in diameter for food, dams and lodges.

Nowadays, these furry, flat-tailed animals are overpopulating many East Texas areas. They dam up streams and flood out grazing and crop land, causing millions of dollars of damage. Show a beaver running water and it’ll make a personal vow to plug it up. I’ve had several calls from local people about beavers chopping down trees on their property.

So what can you do if pesky beavers are plaguing your property? Micah Poteet, a biologist with the Texas Parks and Wildlife Department says “nuisance” fur bearers such as beavers can be “taken” (that means killed) by a landowner by any means, at any time, day or night in any season and in unlimited numbers. Some people even use dynamite to blow up their dams and lodges. However, and this is important, the landowner may not keep the fur or parts of the dead beaver unless it was taken during regular trapping season and the “taker” has a valid license. So, just get the “bad guys” and leave ‘em lay.

Many, many years ago trappers in the mountain west developed a taste for beaver meat; especially their tails. The tale goes that some devout Catholic fur trappers in the mountains decided that beaver, especially the tail, tasted like roast beef. I guess they must have had some really bad beef! ‘Cause I think beavers taste awful!. Anyhow, they wrote to the Church for permission to consume them on Fridays, a day then reserved for eating only fish. Based on the trappers description of the beaver as an animal that swam in lakes and rivers and had a flat scaly tail, Church authorities concluded that they must be fish. Permission granted! I guess there were no Bishops in the Church then who were wildlife biologists.

Beavers are actually rodents – semi-aquatic rats, if you will. They are fast and graceful swimmers, using their webbed hind feet as paddles and muscular tail for additional thrust and steering. Slapping their tail on the water is a danger signal to others of their kind. Smack! Dive! Dive!

Although they can not breathe under water, beavers are able to stay under for as long as fifteen minutes. Try that yourself someday when you’re bored. When they dive, flap-like valves in their ears and nostrils close to keep the water out, a bit like submarines.

These water loving “rats” prefer to eat tender herbaceous vegetation, but they also dine on the inner bark of aspen, cottonwood, willow, maple and other tree species. Typically, they cut trees 3-4 inches in diameter, but I have seen aspens out west as large as 18 inches felled by beavers.

Beavers are mostly nocturnal, so you may not see them, just their stick and mud dams and damage. If you want to observe them, look for dams at the outflow of a pond or lake or their lodges in deeper water. Sit very quietly and if you’re lucky you may see the graceful ‘V’ wake of one of these interesting furry rodents as it patrols its territory or hear the pistol-crack of their tail slapping the water alerting others of your intrusion into their domain.

Whatever else they may be, beavers are fascinating creatures in our fields and forests. And just maybe the problem is that we’re encroaching on their territory rather than the other way around. Could be.