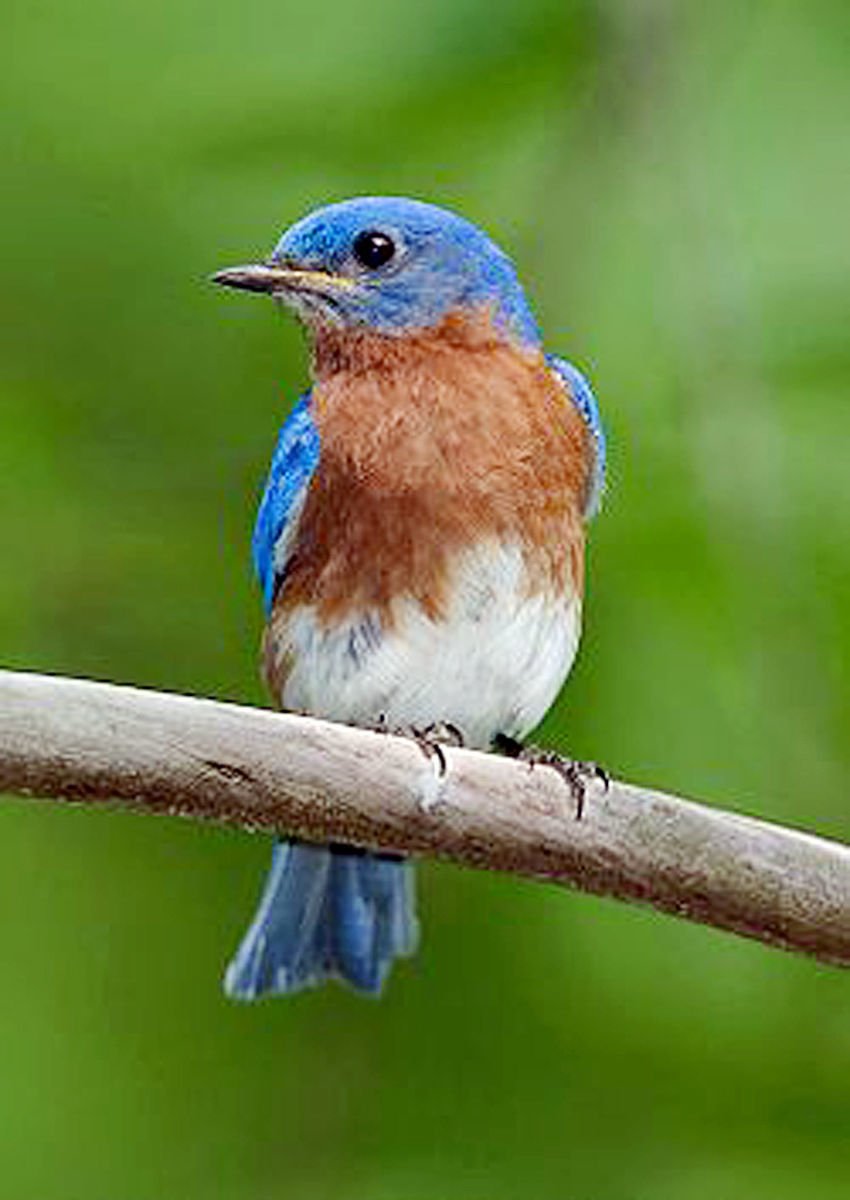 The “bluebird of happiness” is a frequently heard phrase. I think of these perky birds as friendly although pure scientists will probably laugh at me for attaching human characteristics and attitudes to a bird. Go ahead and laugh. I still think so.

The colorful Eastern bluebird is found throughout the eastern half of the U.S. and as far south as Nicaragua. They are small birds 6-8 inches long with a wingspan of 10-12 inches. Males are a deep blue on their back, tails and head with an orange-red breast and throat. Females are grayish with more subdued bluish color.

Their food consists mainly of grasshoppers, crickets, katydids, beetles and other insects. They also eat earthworms, spiders, millipedes, centipedes, sow bugs, and snails. Wild fruits or berries are also on the menu.

Mating occurs during spring and summer and a female may raise from two to four broods each season. In the wild the mother birds make nests in abandoned woodpecker holes or other cavities in trees. The cup-shaped nest is constructed over a period of about ten days from pine needles, grass, feathers, stems and hairs.

Four to six pale blue eggs are laid and the hatchlings appear in13-16 days. The parents tend to them constantly for about a week or longer before they are able to be more on their own. The fledglings usually leave the nest 15-20 days after hatching. Raccoons, snakes and domestic cats are a real danger to the eggs, young and adults on the nest. We sheath the posts on our nest boxes with aluminum to prevent this predation.

Bluebirds can live four to ten years (a record) but most barely make it to a year of age or a little longer due to weather, starvation and predators.

Well so much for the biology lesson. Now comes the fun part. Tales and folklore about bluebirds and their benefits to humans.

According to Wikipedia, bluebird stories go back all the way to the Shang dynasty of China – 1766-1122 BC –when a blue or green bird (qingniao) was the messenger bird of Xi Wangmu (the ‘Queen Mother of the West’).

Ruth Benedict wrote in a 1932 publication called Tales of the Cochiti Indians that the male child of the sun is named Bluebird (Culutisa). The Cochiti tribe has ties back to the ancient Anasazi cliff dwellers of New Mexico and Arizona.

The present day Navajos say the mountain bluebird is a spirit in animal form associated with the rising sun. And, the “Bluebird Song” is sung to remind tribe members to wake at dawn to greet the sun. Perhaps the early bird really does get the worm.

The “Bluebird Song” is also performed as part of the nine-day Ye’iibicheii winter Nightway ceremony, where it is the final song, performed just before sunrise of the ceremony’s last day. (Wikipedia)

The lyrics “Somewhere, over the rainbow, bluebirds fly” in The Wizard of Oz is well known by most of us and represents happiness. In “Song of the South” the lyrics of “Zip-a-Dee-Doo-Dah,” includes “Mr. Bluebird on my shoulder” as a symbol of good cheer.

But the folklore goes deeper than all this. Some people today believe that bluebirds may be angels. Or, if you see one it may indicate that your personal guardian angel is near and that your life will improve. Worries can drift away with the sighting of this blue messenger from the Divine.

Happiness and hope are key words in describing this colorful avian and that same message is found in Russian folklore. So putting up a bluebird nest box may attract heavenly providence into your life and the birds can lift your spirits and give you hope for the future. If they nest in your yard count yourself lucky.

Seeing a bluebird in your dreams may also mean that angels are near you and your life will improve. Happiness and joy will come. The “Bluebird of Happiness” is a messenger of peace, love and tranquility.

This darting, spectacular little bird is a beautiful, peaceful part of our fields, forests and backyards; a reminder to slow down, relax and enjoy the natural world.

May this spring and summer bring these wonderful little harbingers of good to lighten your burdens and bring you happiness.