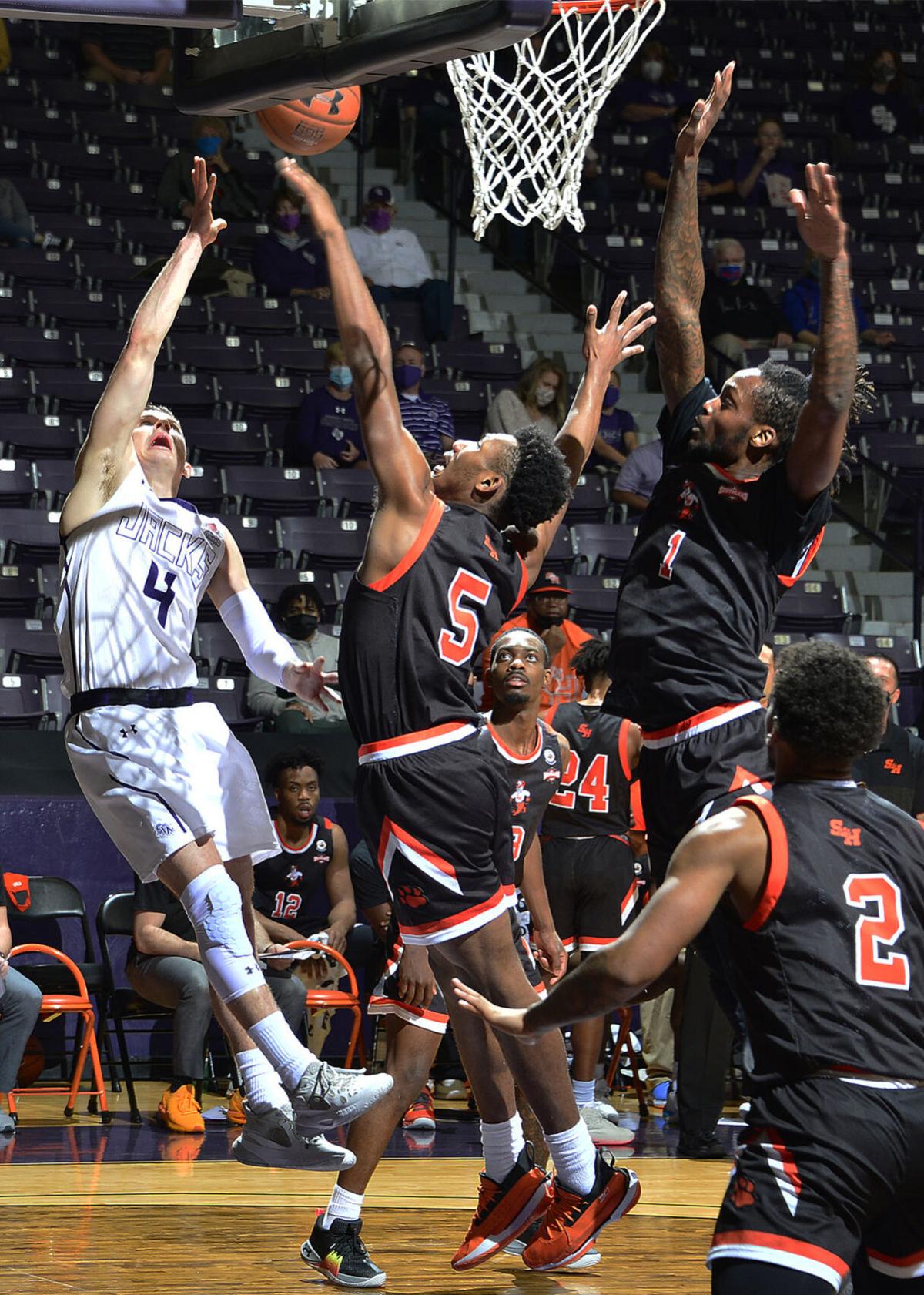 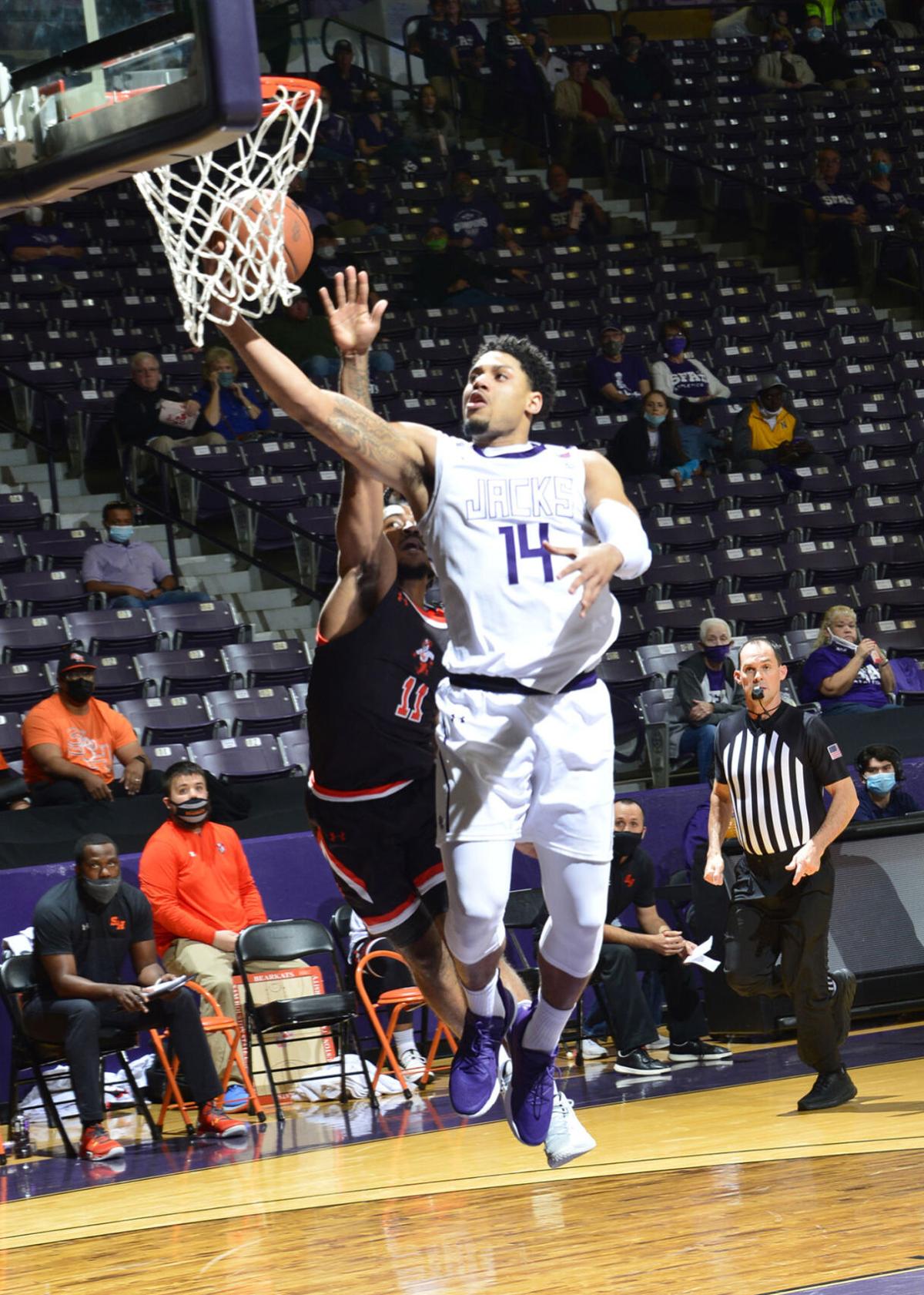 Stephen F. Austin senior Gavin Kensmil (14) puts up a hot in the paint while being defended by Sam Houston's Javion May (11) during Sunday afternoon's game inside William R. Johnson Coliseum. 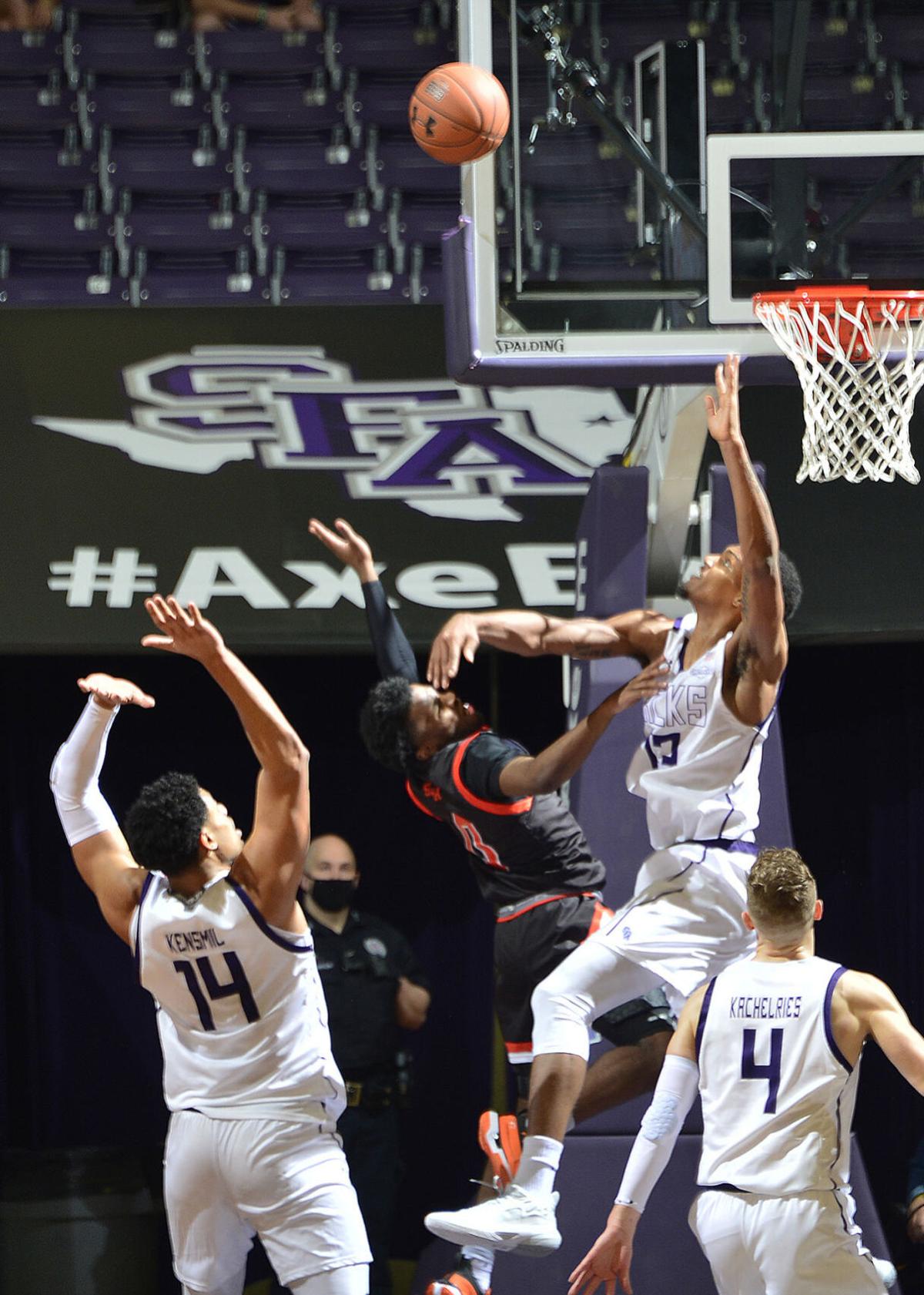 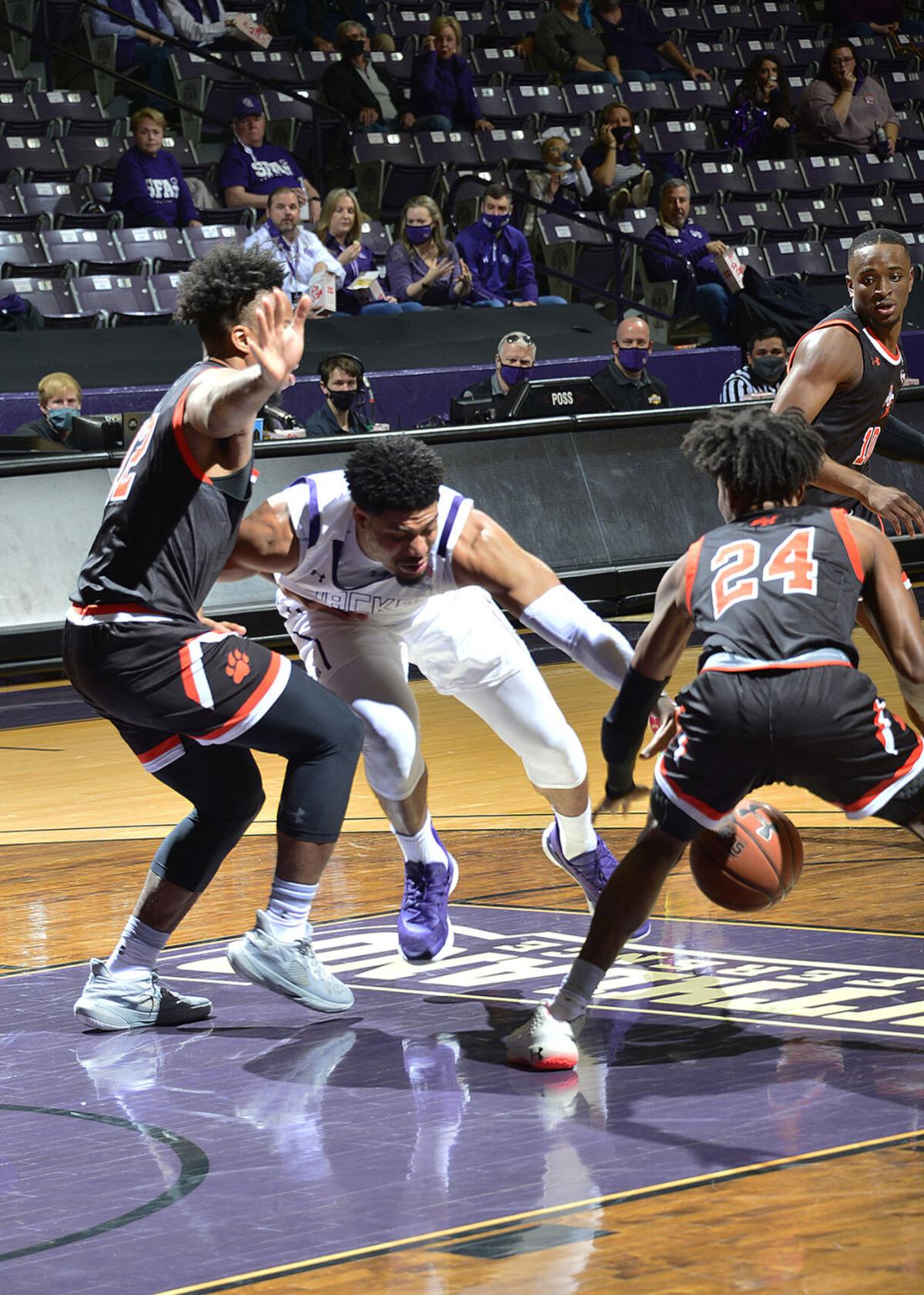 Stephen F. Austin senior Gavin Kensmil (14) puts up a hot in the paint while being defended by Sam Houston's Javion May (11) during Sunday afternoon's game inside William R. Johnson Coliseum.

Facing the only only unbeaten squad in the Southland Conference chase thus far, the Stephen F. Austin Lumberjacks overcame an early second-half lead by Sam Houston, using a career-day by senior David Kachelries to push past the arch-rival Bearkats, 78-68, Sunday in a nationally-broadcast game inside William R. Johnson Coliseum.

Kachelries, who hit 8-of-12 from the field, including 4-of-8 from behind the three-point arc to lead all scorers and snap his previous career high of 17, said the social-distanced crowd of 1,989 seemed much larger and helped the squad get past their rival. A key 10-0 SFA run over a span of 1:57 turned a two-point deficit into the lead for good, 49-41, with 16:47 remaining. The Lumberjacks then pushed the lead to 10 on three occasions in the final 20 minutes to seal the win.

“When we came out (in the second half, leading 39-36), we wanted to have a really good first five minutes, so that’s what we did, playing really good defense,” Kachelries said later. “I think the crowd gave us a huge boost.”

“I think (Sam Houston) got confused on defense (during the run),” Kachelries added. “We run a really good offense and have a lot of options and I just happened to be open. It might have been a defensive lapses on their side and I was really wide open. I even looked around for a second and couldn’t believe I was that wide open (on the three-pointer).”

The Lumberjacks, fueled by their confidence and their largest home crowd of the season, continued to put pressure on the Bearkat defense the rest of the way.

“I think it was great to have more people show up,” said SFA head coach Kyle Keller. “This game means a lot to a lot of people. I appreciate the support of our administration and for the people to not to have the fear and to show up to this gathering-type of a setting. The 2,000 fans we had today was great and it was great to have the noise in the Sawmill. It almost made it feel like a game again, especially since there usually isn’t an empty seat for a game like this.”

Both teams recorded 10 turnovers in the game, but SFA scored 17 points off the Bearkat miscues, while Sam Houston scored just 12 off the SFA turnovers. The ‘Jacks won the scoring in the paint battle, 40-26, second chance points, 16-12, and outscored the ‘Kats 16-5 in fast break points.

In addition to Kachelries’ big night, Roti Ware hit 8-of-14 from the field for 19 points. He also tallied five boards. The Bearkats held Gavin Kensmil and Cameron Johnson to just nine points apiece, as each player tallied four rebounds. Nigel Hawkins and Charlie Daniels each chipped in seven points.

“(Sam Houston) does a great job of coaching on their end,” Keller added. “They took our two big scorers out of the game, in Kensmil and Cameron Johnson. And we took their top scorers, in (Zach) Nutall and (Demarkus) Lampley out of their game, so complementary players had to step up today and fortunately for us we had more (players) play better.”

AROUND THE SOUTHLAND: In other results on Saturday around the Southland Conference on Saturday, Northwestern State grabbed an 81-77 home win over Central Arkansas, Abilene Christian took down Incarnate Word, 75-67, at home, Southeastern Louisiana topped New Orleans, 79-73, at home, and Lamar grabbed a 64-56 road win over McNeese. The Houston Baptist game at Texas A&M-Corpus Christi was postponed because of COVID-19 reasons.

UP NEXT FOR SFA: The Lumberjacks will make up a postponed contest against the Islanders of Texas A&M-Corpus Christi on Wednesday, Feb. 3, in Corpus Christi. The game had been scheduled to take place on Jan. 6, but was postponed as a result of COVID protocols. The contest will tip off at 7 p.m. and air on ESPN+.