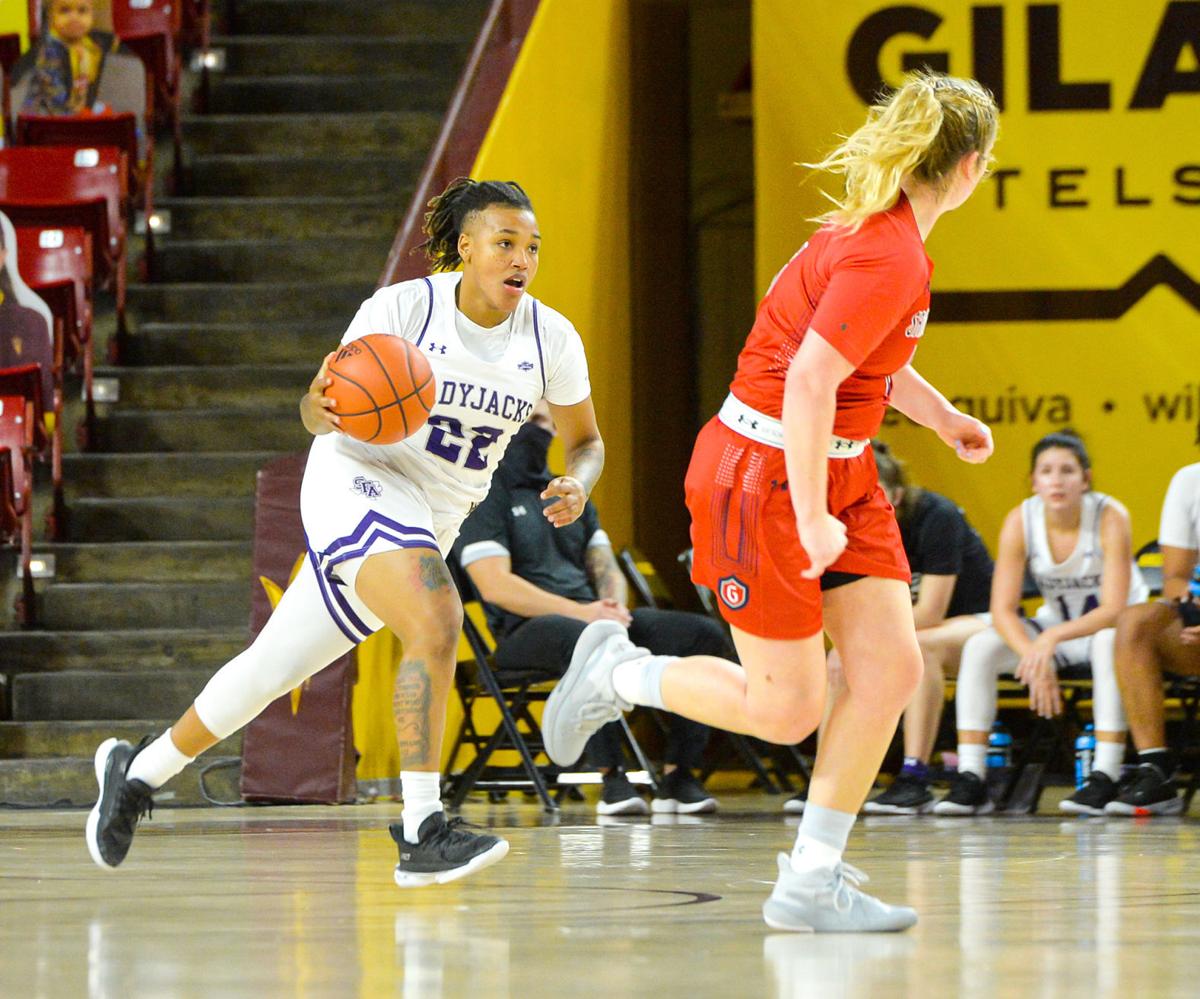 Photo courtesy of Will Edmonds/ASU Athletics 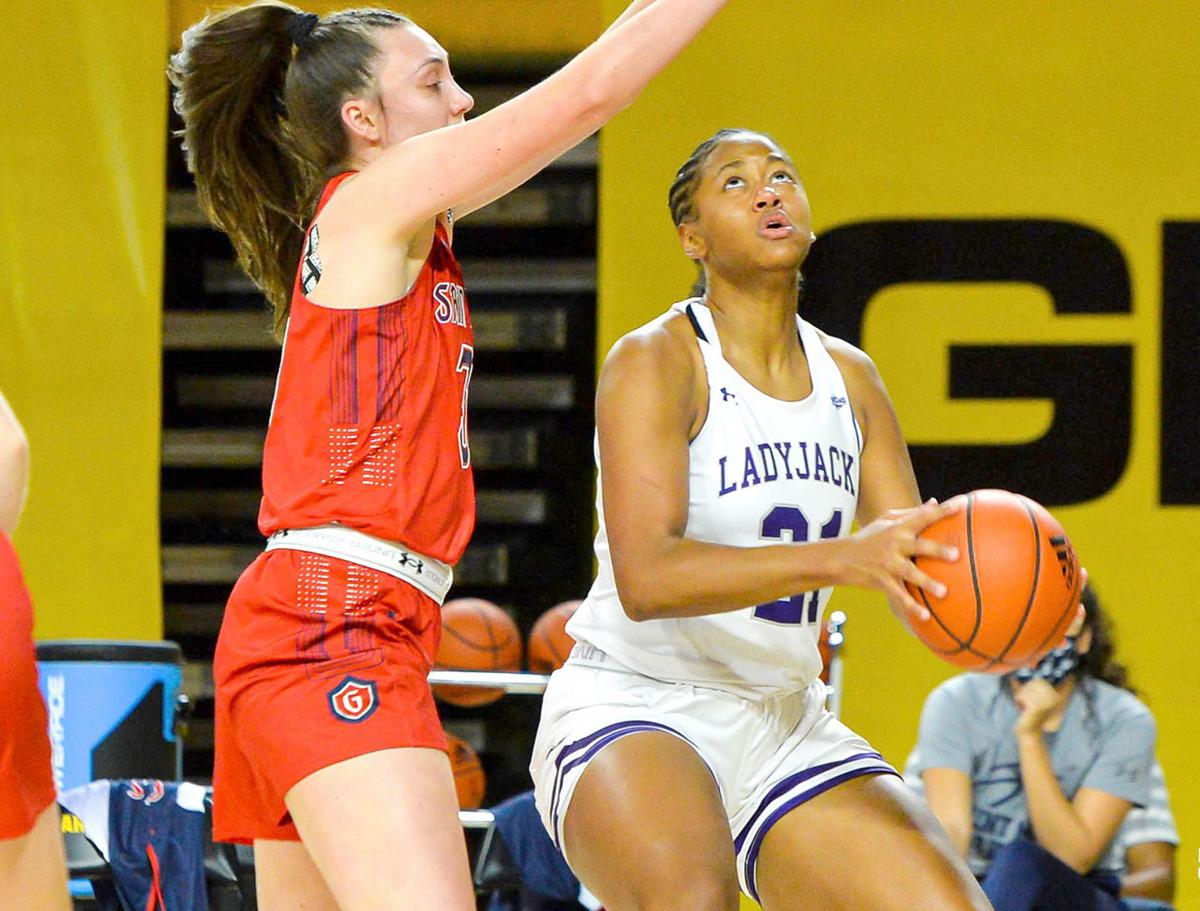 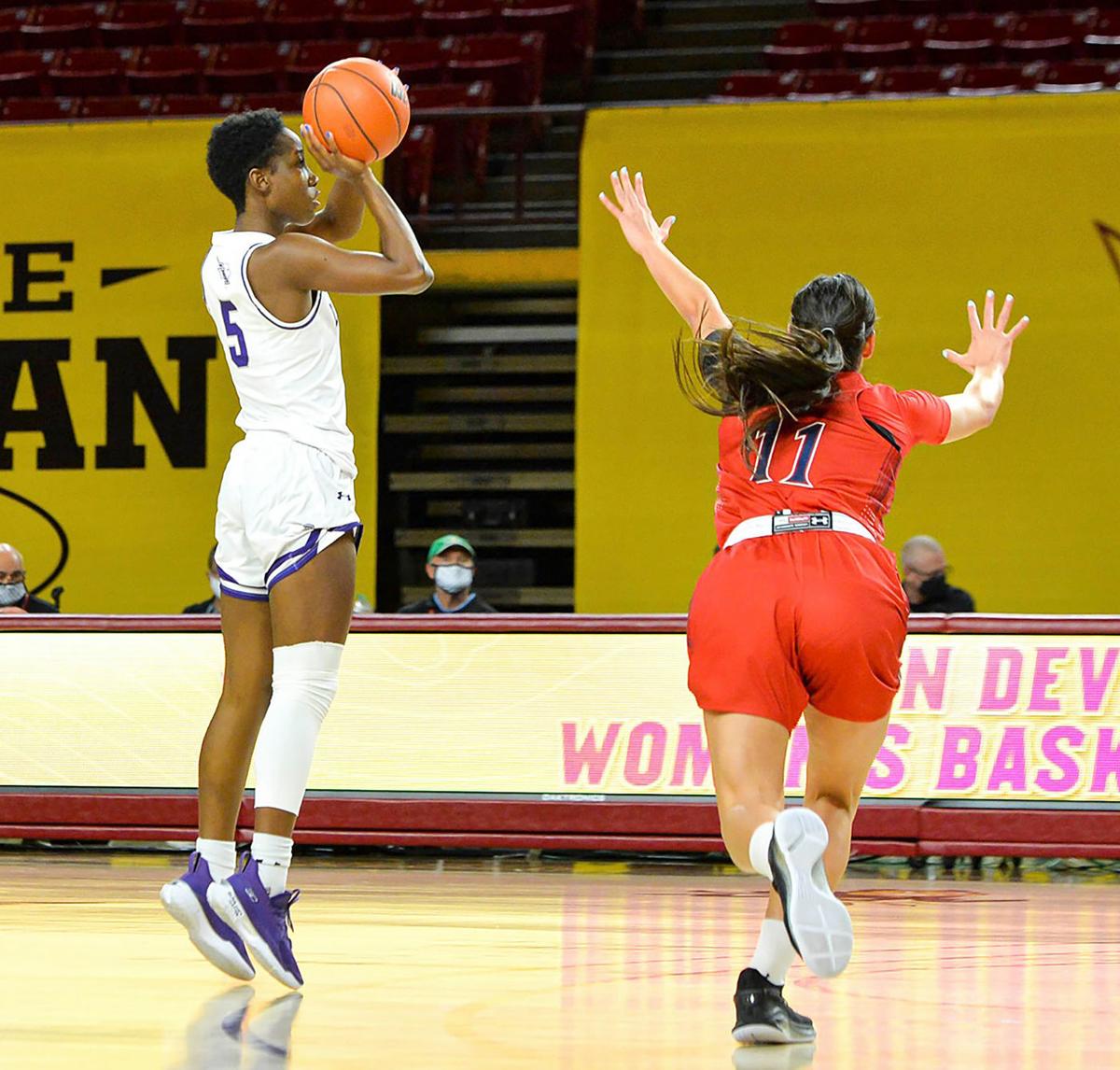 Photo courtesy of Will Edmonds/ASU Athletics

TEMPE, Ariz. — The SFA women’s basketball team rebounded from a dismal second quarter with a second-half surge, coming from behind to defeat Saint Mary’s (CA) by a 69-59 inside Desert Financial Arena on Friday. The victory was buoyed by a strong defensive performance by SFA, and evened the Ladyjack’s record to 1-1 on the young season.

Zya Nugent paced the Ladyjacks with 14 points and tied for the team lead with five rebounds, Tasharian Robinson (3-5 3-pt FG’s) chipped in 13 points and three steals, while Aiyana Johnson tallied 11 points and five boards. The Ladyjacks shot 43% (26-61) from the field in the contest overall, but caught fire in the second half (56.7%, 17-30 FG) to outscore SMC 45-30 in the stanza.

Unfortunately, a low-scoring second quarter by SFA allowed Saint Mary’s to re-take the lead heading into the halftime break, as they outscored the ‘Jacks 18-6 in the frame.

Saint Mary’s would open up the third quarter with a pair of baskets to extend their lead out to a game-high nine points (33-24).

An 8-1 run by the Ladyjacks helped trim the lead down to two points briefly, before SMC clawed it back to seven points with 3:17 left to play in the quarter. SFA got baskets from Robinson, Nugent and Johnson to key an 8-2 run, and the home squad would take the lead a minute later on an Alyssa Mayfied layup. A pair of free throws by SMC would tie the game up 45 apiece heading into the final quarter of play. SFA had outscored the Gaels 21-16 in the frame.

After opening the quarter with several minutes of back and forth play, the Ladyjacks turned it on for a four minute stretch in the quarter, wherein they went on a 12-2 run that turned a three-point deficit into a seven-point lead with two and a half minutes left to play.

Saint Mary’s tried to respond in kind, but the Ladyjacks added eight three throws down the stretch to put the game on ice and stave off any comeback attempt.

SFA’s defense was a disruptive force on the day, as the Ladyjacks tallied 17 steals as a unit. Avery Brittingham swiped five passes a day after leading her squad in rebounding, while Nugent, Robinson and Mayfield each tallied three steals.

SFA forced 30 Gael turnovers and converted those miscues into 32 points. Additionally, SFA held Saint Mary’s to 39% shooting from the field in the contest, and just a 26% clip from three (4-15).