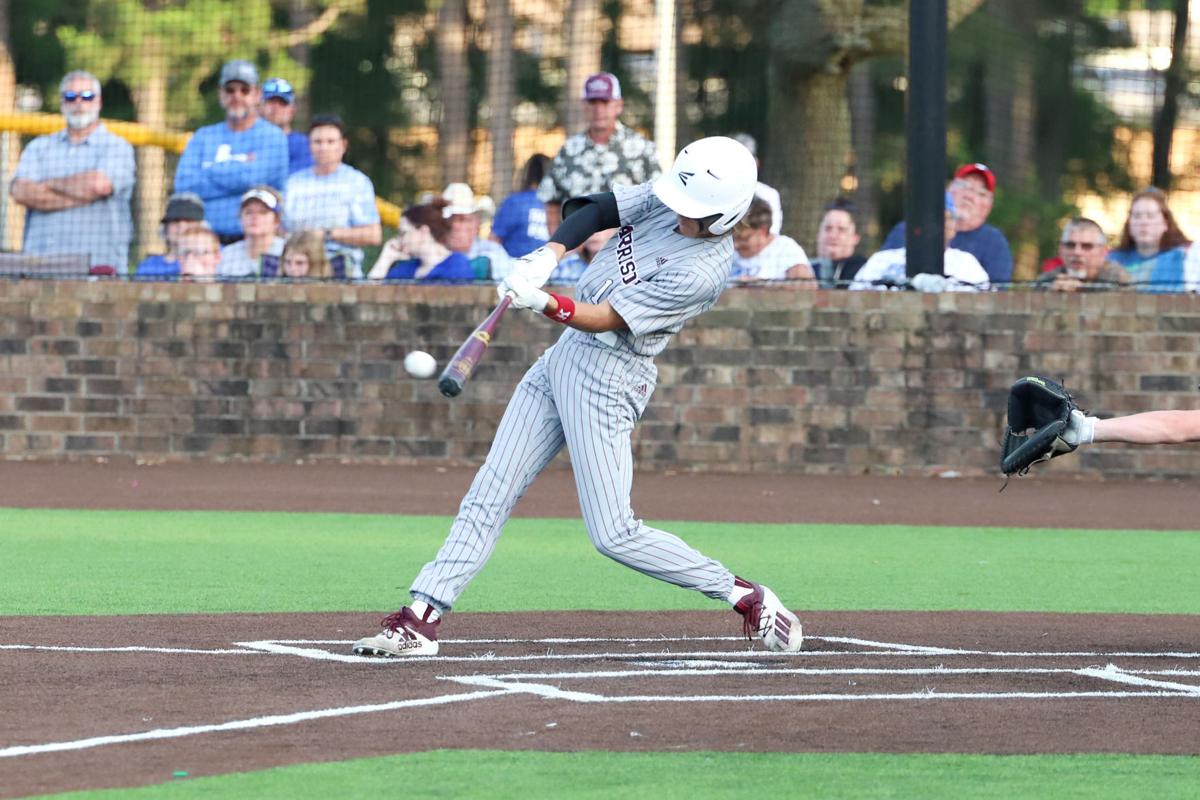 Garrison Bulldog junior third baseman Britt King makes solid contact with the ball during last week’s Class 2A Region III Championship at Marshall High School. King and the ’Dogs will battle Bosqueville Wednesday at Dell Diamond in Round Rock in a 2A State Semifinal at 7 p.m. 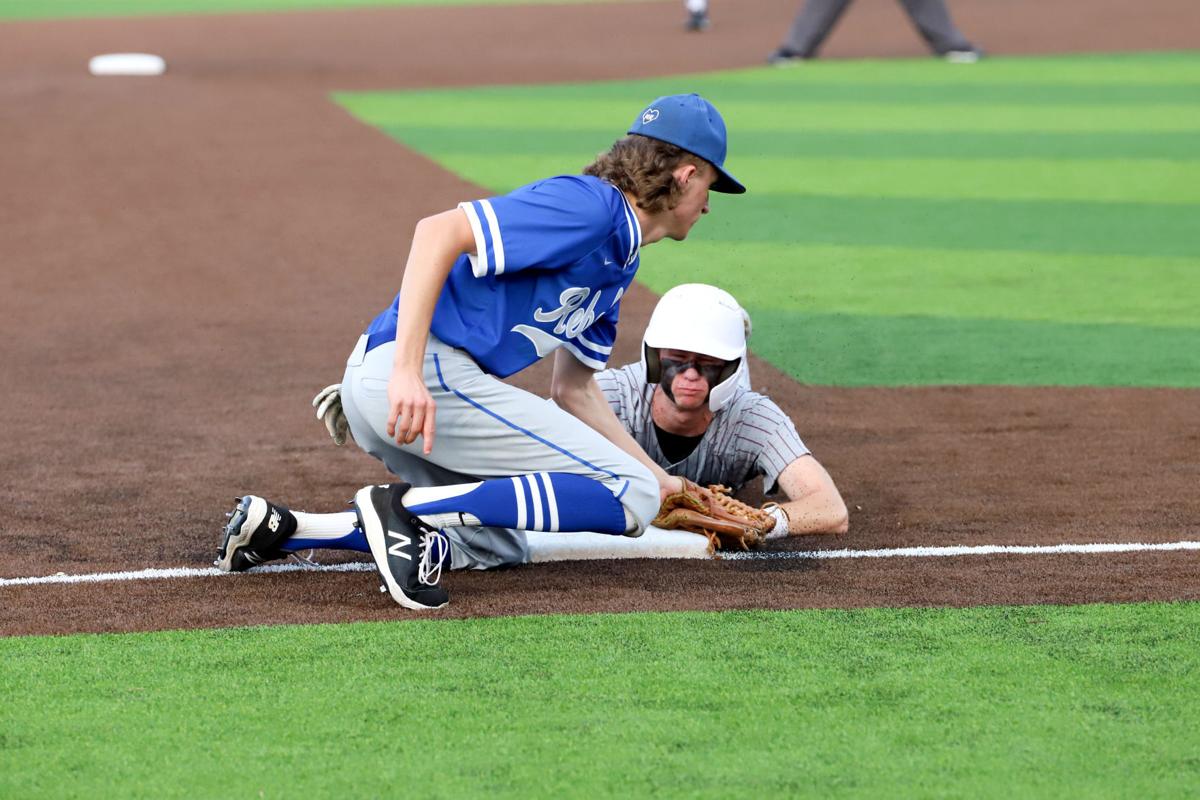 Garrison Bulldog senior baserunner Tyler Spivey slides safely into third base during action against Rivercrest during the Class 2A Region III Championship at Marshall High School. The ’Dogs will battle Bosqueville Wednesday at Dell Diamond in Round Rock in a 2A State Semifinal at 7 p.m.

Garrison Bulldog junior third baseman Britt King makes solid contact with the ball during last week’s Class 2A Region III Championship at Marshall High School. King and the ’Dogs will battle Bosqueville Wednesday at Dell Diamond in Round Rock in a 2A State Semifinal at 7 p.m.

Garrison Bulldog senior baserunner Tyler Spivey slides safely into third base during action against Rivercrest during the Class 2A Region III Championship at Marshall High School. The ’Dogs will battle Bosqueville Wednesday at Dell Diamond in Round Rock in a 2A State Semifinal at 7 p.m.

If they haven’t done so before, it’s time for the Garrison Bulldogs to pull out all the stops. There’s no tomorrow if they don’t win and not much room for error.

Making their first trip to the UIL State Baseball Tournament in Round Rock, No. 3-ranked Garrison (28-8) will put it all on the line at Dell Diamond Wednesday when the ‘Dogs battle the No. 2-ranked Bosqueville Bulldogs (35-3) at 7 p.m. in one Class 2A State Semifinal matchup. Garrison will occupy the first-base dugout.

The games will be broadcast on the NFHS Network (www.nfhsnetwork.com) for $10.99 (monthly fee — all state games can be watched for this fee), while Garrison will have an audio broadcast on www.mixlr.com/garrisonbulldogs. Tickets will be available online or at the gate for $15 per day. There are four games (including the Class 1A Semifinals) played at Dell Diamond on Wednesday.

Although none of the four Class 2A teams have participated in the state tournament since 2018, Garrison will be the only program there with no past participation.

Garrison head coach Dempsey Compton, who won his 200th career game as a head coach in the third round of the playoffs, brings the ‘Dogs in with a 9-0 postseason record this season and on an overall winning streak of 19 games. GHS hasn’t gone down to defeat since a non-district setback to Diboll, 11-5, on March 23. Garrison captured the District 23-2A championship with an unblemished 16-0 mark, the first time the program has logged an unbeaten district record.

Dewberry is 11-0 on the year, including 4-0 in the playoffs. He has worked 26.2 innings in the postseason, throwing 440 pitches while holding a 0.53 earned run average. He is averaging 16.8 strikeouts and 3.5 walks per seven innings.

Dewberry is also the leading hitter on the squad with a .412 average. Senior outfielder Freddy Christopher, who injured his shoulder in the regional final against Rivercrest and is probable for the state tournament, is second on the team in hitting with a .405 average. Sophomore second baseman Tryton Kruse and senior shortstop Tristan Adkison are both hitting .403 and Spivey is just under the .400 mark, hitting .388 on the year.

Compton said the key coming into the tournament is business as usual for his squad. In fact, there was no charter bus for the Bulldogs when they left Garrison. They road the ‘yellow dog’ to Round Rock.

“I think we have to just keep doing our routine,” Compton said. “The kids have been good all year long. We’ve traveled all year long to big tournaments and we’ve been on the road a lot. We love it. We’ve played on (artificial) turf 21 times so far, so we’re used to it.

“What we have to do is take it one game at a time. We’re going after Game 1 and then go from there. We’re going to do whatever it takes and pitch whoever we have to to win that game, because if you don’t win the semifinal, there is no championship game.”

Bosqueville enters Wednesday’s action having only lost three times all season long. The District 14-2A champion from Region II was also unbeaten in league play at 12-0. The ‘Dogs did lose once in the playoffs, a 2-0 setback to Windthorst in the Region II Semifinals. That was the opening game of a best-of-three series, as BHS came back to win the next two contests, 7-2 and 7-3.

Bosqueville is 9-1 in the postseason and has won 30 of its last 31 games overall.

BHS is led on the mound by sophomore John Youens, who is 11-0 on the year. Senior Jacob Davilla is right behind with a 10-1 mark.

Youens leads the squad in hitting with a .525 batting average, followed by junior third baseman Camden Hill at .511, and sophomore shortstop/pitcher Hunter Henexson is at .481. Senior OF/P Ryder Roark is hitting .459 and freshman Easton Hill is sitting at .458.

at Dell Diamond, Round Rock

at Dell Diamond, Round Rock