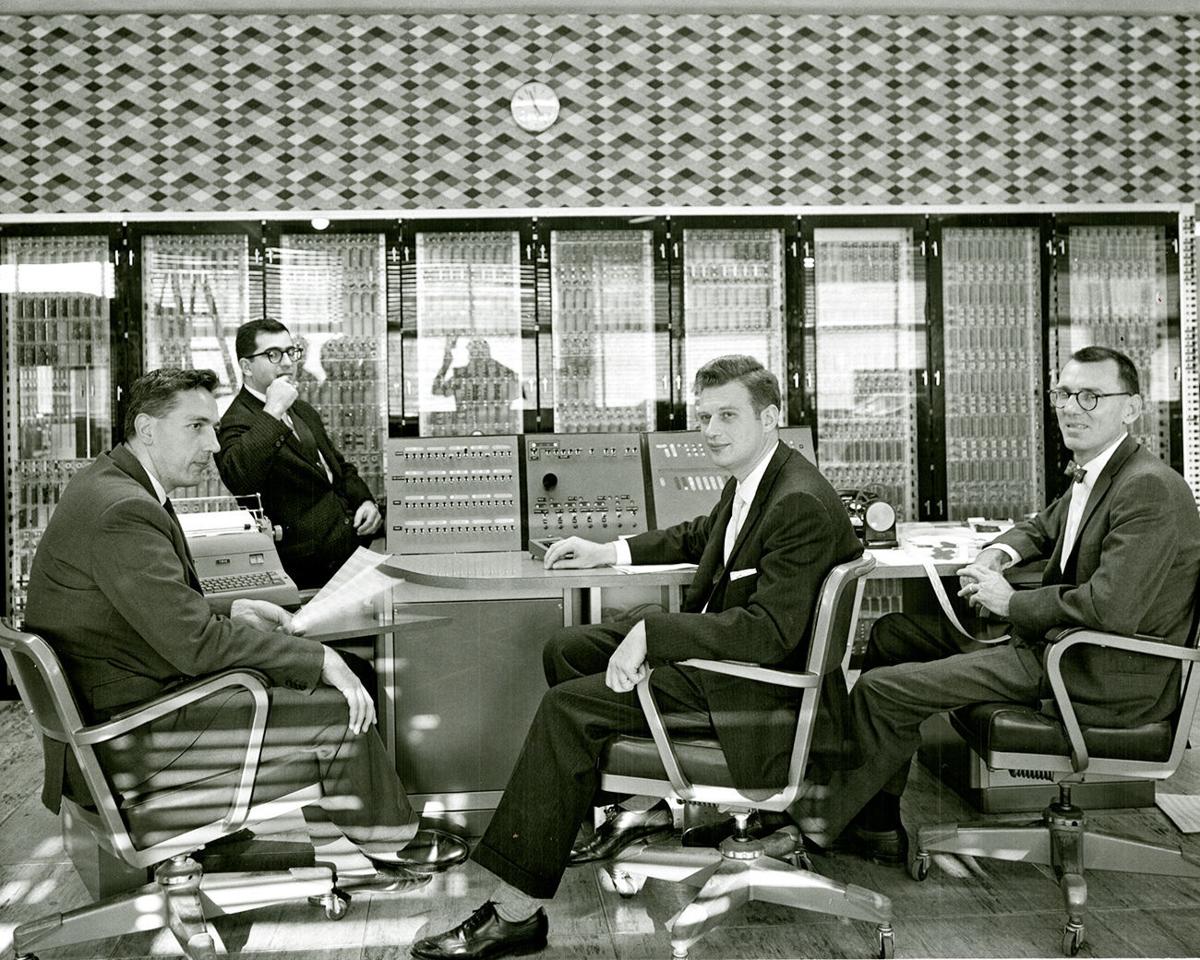 SFA graduate John Edgar Kilpatrick Jr., left, is seen with Rice University scientists John Kenneth Iliffe, Martin Graham, Zevi Salsburg, sitting in front of the Rice Institute Computer they developed in this 1963 photo. The computer was the first of its kind in Texas. 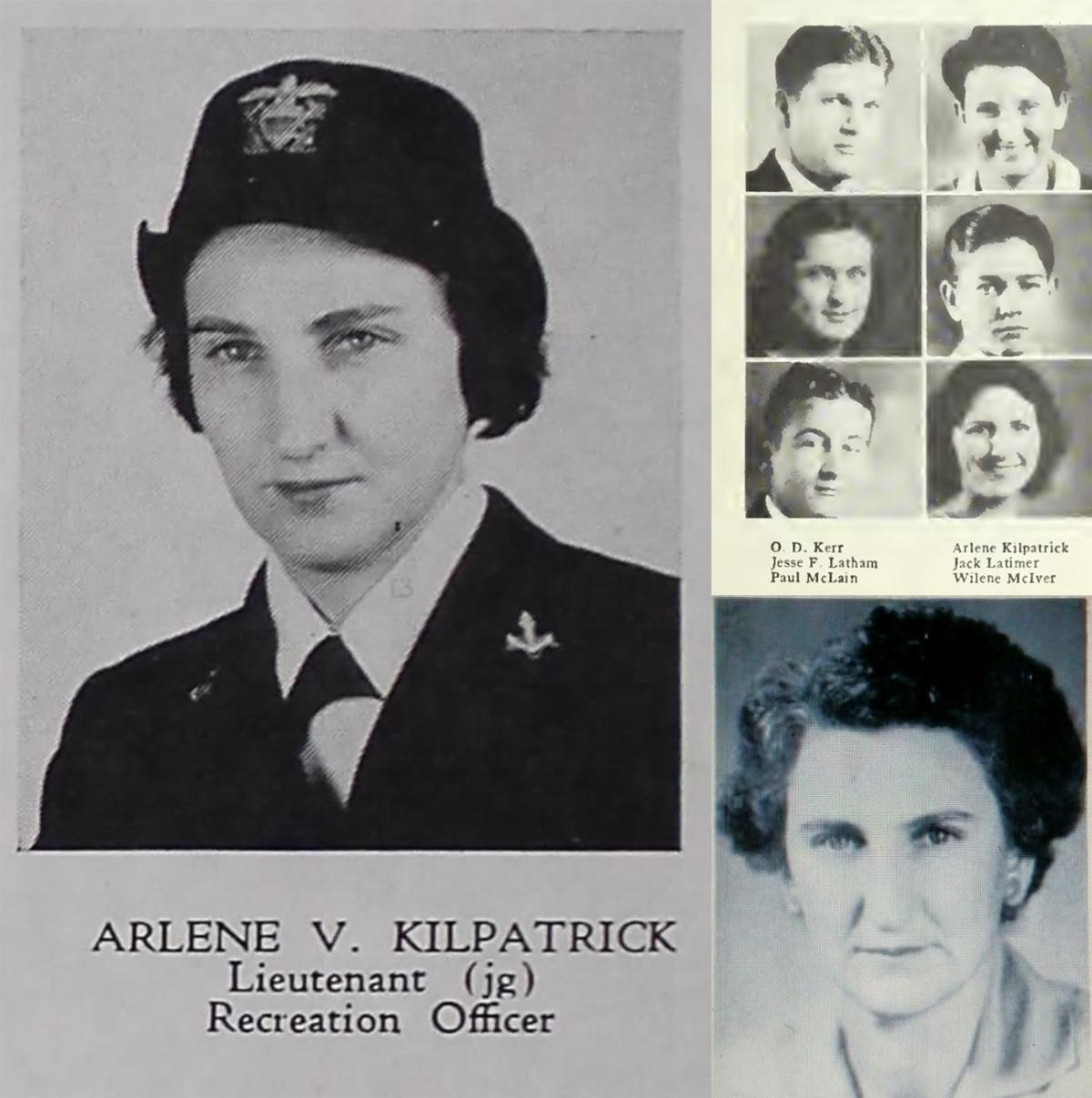 Doris Kilpatrick Watts, second from left, is seen in this 1950 photo from the Stone Fort Yearbook. She was a librarian at SFA for 23 years after she graduated from the university. 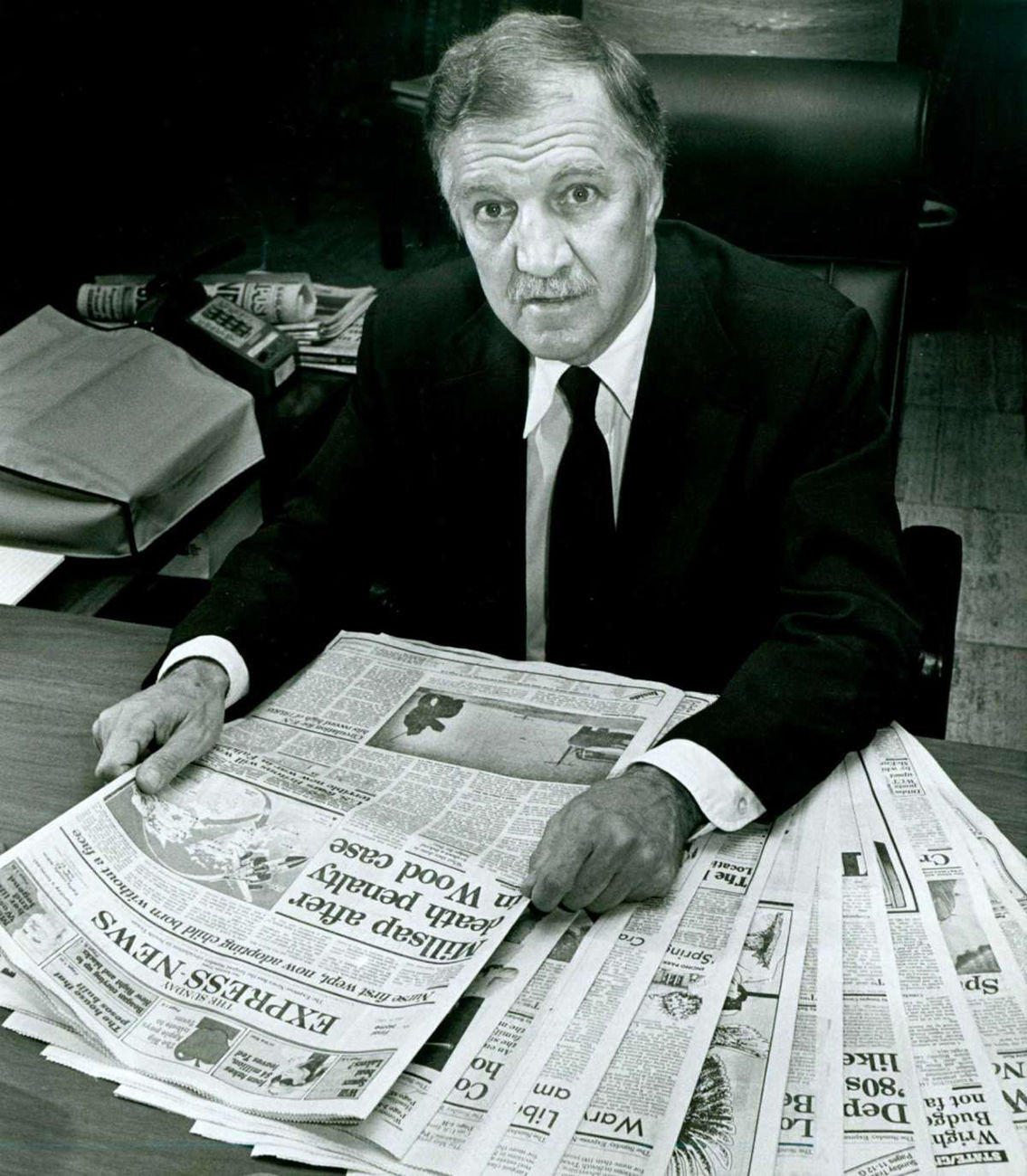 Charles O. Kilpatrick, an SFA graduate, spent decades as editor and publisher of the San Antonio Express-News. He was the youngest of the four Kilpatrick children whose family settled in Nacogdoches before 1930.

SFA graduate John Edgar Kilpatrick Jr., left, is seen with Rice University scientists John Kenneth Iliffe, Martin Graham, Zevi Salsburg, sitting in front of the Rice Institute Computer they developed in this 1963 photo. The computer was the first of its kind in Texas.

Doris Kilpatrick Watts, second from left, is seen in this 1950 photo from the Stone Fort Yearbook. She was a librarian at SFA for 23 years after she graduated from the university.

Charles O. Kilpatrick, an SFA graduate, spent decades as editor and publisher of the San Antonio Express-News. He was the youngest of the four Kilpatrick children whose family settled in Nacogdoches before 1930.

The four Kilpatrick children might have never had a chance in life if it weren’t for Stephen F. Austin State University.

If the university’s Distinguished High School Program, which they announced this month, had existed two generations ago, they would have been prime candidates. The program is designed to give a financial boost to intelligent young people who otherwise might not have the opportunity to get a higher education.

The cost of attending a college or university has risen exponentially in the past few decades, but that doesn’t mean it was always within reach for the best and brightest.

The Kilpatricks scrimped, saved and worked hard, and thanks to their educations at SFA, they become some of the most successful people in their fields.

Census records indicate they never had much money. John Edgar Kilpatrick Sr. worked as a salesman. Sometimes it was insurance. Sometimes general goods. At one point he was selling “developer fluid,” whatever that is.

He and his wife, Myrtle, lived around the South before finally settling in East Texas. Mississippi. Louisiana. Northern Oklahoma. Between 1900 and 1930 these were areas of massive economic struggle, places where blues was a way of life, not just a style of songs picked out on a beaten up acoustic guitar.

Life in East Texas wasn’t much more prosperous. In the obituary for Charles, the youngest child, his family describes him as “a small-town boy who learned to work hard growing up in East Texas during the Depression.”

But there was something different about the Pineywoods — a brand new university. Arlene, the oldest, was the first to attend. She soon became a member of the faculty. More on that later.

Her sister Doris followed. She graduated in 1939, earned a masters in library science from George Peabody College in Nashville and returned home to work as a college librarian for 23 years. It was a long and respectable career doing what she enjoyed.

John Jr. was next. To say he studied chemistry is as big of an understatement as insisting that time he attended college was a mild inconvenience to the American pocketbook. John Jr. mastered chemistry. He graduated from SFA in 1940, earned his first graduate degree for the University of Kansas in 1942, received a doctorate from the University of California in 1946 and joined the faculty of Rice University in 1947. He was a pioneer in organic chemistry and computing.

See, John Jr. had been an early user of the MANIAC computer at Los Alamos Scientific Laboratory in New Mexico. That computer weighed a thousand pounds and took up almost an entire room. He traveled to New Mexico to use it every summer. He had to have one, so at Rice, he raised a half million dollars in 1956 — around $5 million today — to build his own. The Rice Institute Computer helped make the university a top tier research hub and was the only machine of its kind for a thousand miles.

Charles, the youngest child, was the last to attend SFA. He worked as a reporter for the Redland Herald to help pay for his tuition. Then on a Sunday morning, the world changed. Japan bombed Pearl Harbor. Charles volunteered for the Marine Corps.

He fought at Guadalcanal, Guam and Okinawa where he was wounded in an attack on Naha Airfield.

He returned to Texas in 1946 and went to work for The Daily Sentinel before his career eventually took him to San Antonio where he became publisher of the Express-News, a role he held for 29 years.

All those accomplishments are fantastic for small-town kids who grew up during the Great Depression. Arlene, however, was arguably was the most accomplished and groundbreaking of the four Kilpatricks.

She was a college professor at a time when women like here were expected to get married, stay home and raise families. Society was fine with that career as long as she was an education professor or teaching a more womanly subject like home economics. However, Arlene’s passion was physical education and athletics. That’s something a woman of her time just wasn’t supposed to do.

When the United States entered World War II, she was one of the first Nacogdoches County women to volunteer for service.

She joined the U.S. Naval Reserve — the WAVES — in 1943 and was commissioned as a lieutenant. She was in charge of physical education and recreation programs for male sailors and female members of the WAVES.

Kilpatrick continued her career in physical education at Western New Mexico University. In the 1950s, she took a two year break from teaching to obtain a doctorate. At the time, she was one of around 1,000 women in the county who had obtained such a high level of education.

She didn’t stop there. Women in the 1950s weren’t expected to be leaders. They weren’t supposed to. That was up to men, society and old television shows would have us believe. Arlene wasn’t buying into that ideology.

At Western New Mexico, she founded the women’s athletics program — an ultra rarity before Title IX — served as chair of the Department of Physical Education for 17 years and as the Dean of Women students for seven.

She was also a founder of the New Mexico Council on Youth Fitness — a group made up almost entirely of men and a leader in the American Association for Health, Physical Education and Recreation, now known as SHAPE America.

All the Kilpatricks lived astounding lives, but Arlene was an icon and role model to an entire generation of women.

Her life and the lives of her brothers and sister show how small-town kids can change the world when given the opportunity. Thanks to SFA for continuing to make those opportunities available to our young people though the Distinguished High School Program. Who knows what this next generation of students educated at our university can accomplish.