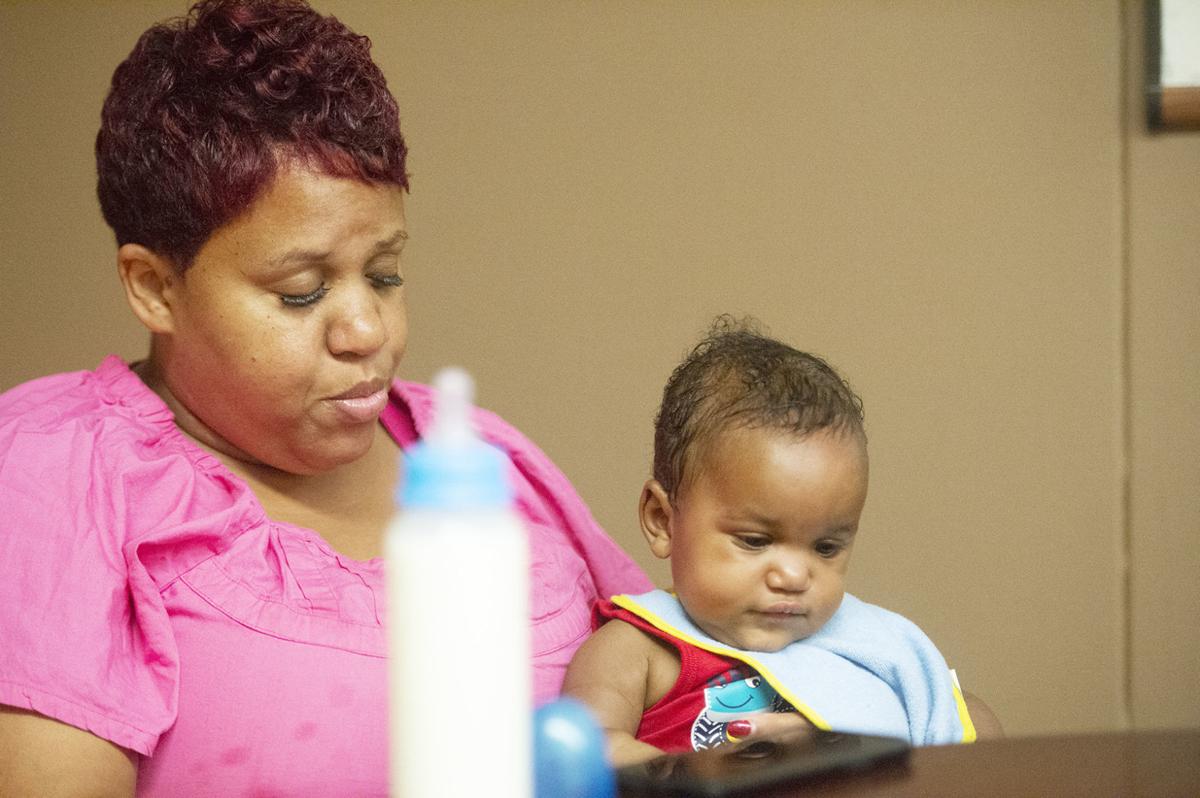 Ieshia Wade-Sweat holds her grandson, Jakowa Wade, as she talks about wanting justice for her son and Jakowa’s father, Damien Wade, who was found dead in Nacogdoches in March. Wade had returned to Nacogdoches just three days before he died. 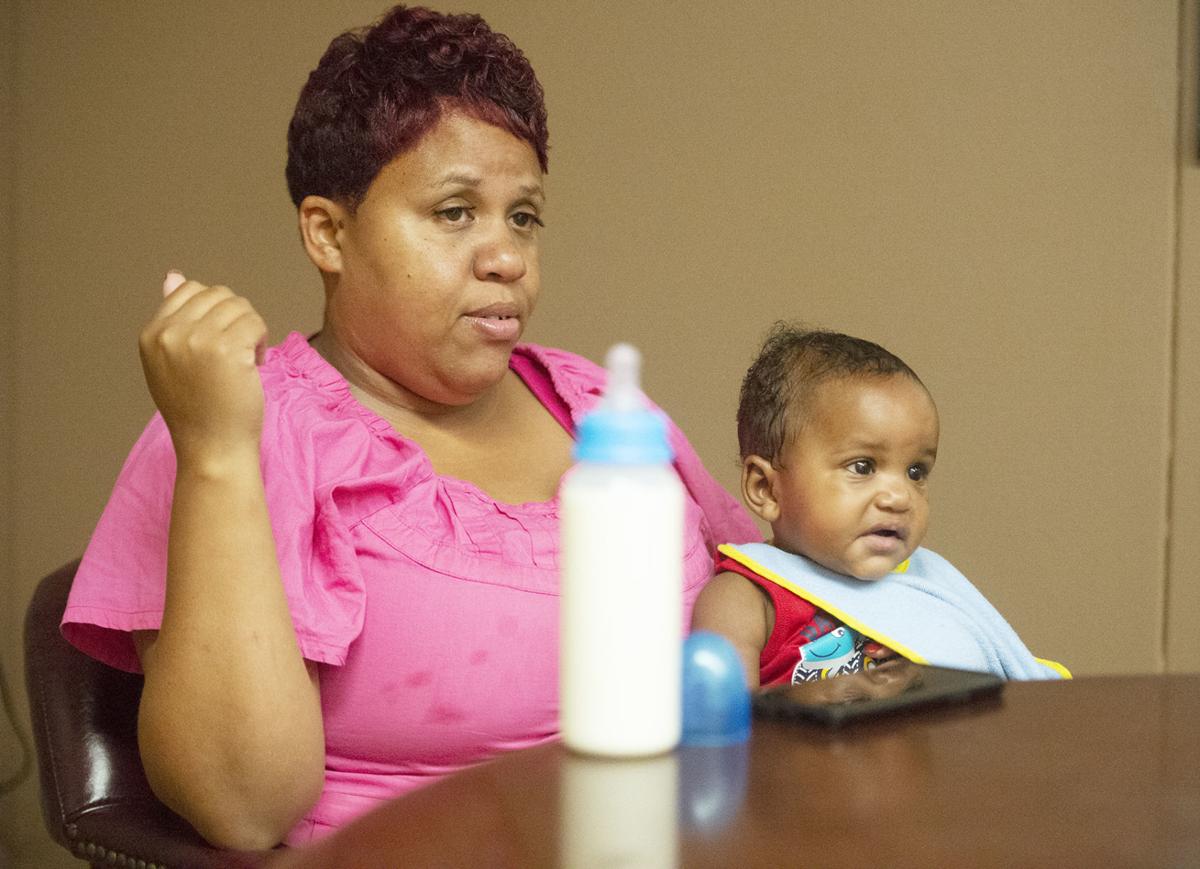 Ieshia Wade-Sweat holds her grandson, Jakowa, as she talks about wanting justice for her son, Damien, who was found dead of a gunshot wound in Nacogdoches in March. The ongoing investigation into Wade’s death has yet to result in an arrest. 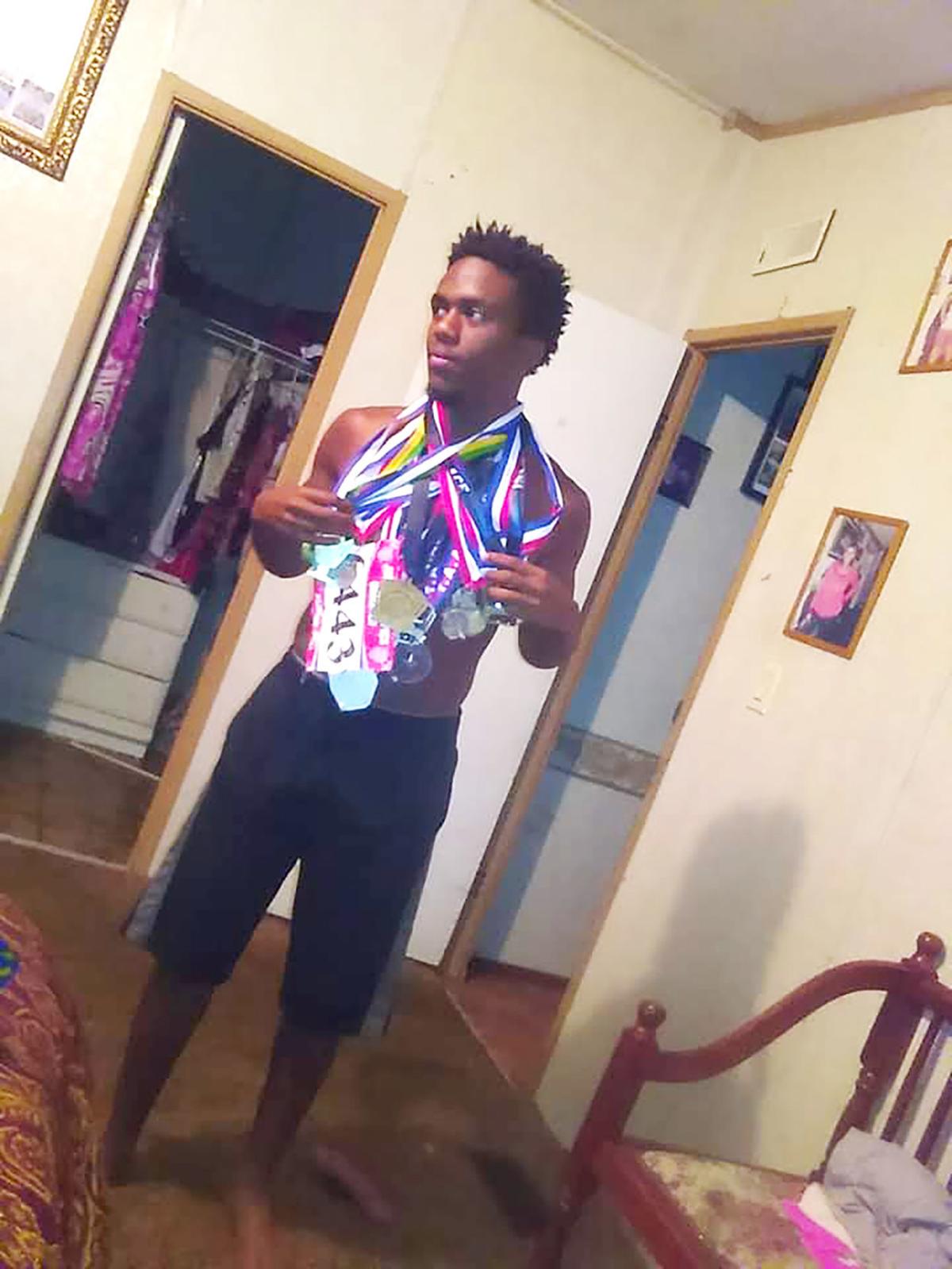 In this undated photo, Damien Wade shows off a collection of medals.

Ieshia Wade-Sweat holds her grandson, Jakowa Wade, as she talks about wanting justice for her son and Jakowa’s father, Damien Wade, who was found dead in Nacogdoches in March. Wade had returned to Nacogdoches just three days before he died.

Ieshia Wade-Sweat holds her grandson, Jakowa, as she talks about wanting justice for her son, Damien, who was found dead of a gunshot wound in Nacogdoches in March. The ongoing investigation into Wade’s death has yet to result in an arrest.

In this undated photo, Damien Wade shows off a collection of medals.

The months since her youngest son, Damien Wade, was shot and killed in the woods along Lola Street have been filled with questions for Ieshia Wade-Sweat.

Wade died March 21, three days after moving back to Nacogdoches from Abilene so he could get an ID and go to work to support his son and girlfriend, his mother said.

“There’s a lot of stuff I don’t understand. I just don’t know, but I want to know why,” Wade-Sweat said.

No arrest has been made in the 18-year-old’s death, and police have not publicly announced a motive for the killing. But on the street, there have been plenty of rumors. She’s heard them all.

“I’ve heard Damien was in the mafia, and the mafia killed him. I heard that Mexican gang members killed him,” she said. “It all doesn’t make sense.”

After hearing all the rumors, the mother of three is encouraging anyone who has the truth about her son’s death to call Nacogdoches police or Nacogdoches County Crime Stoppers.

Crime Stoppers does pay a cash reward of up to $1,000 for the first and best tip leading to the arrest of a felony suspect. Tipsters remain anonymous and do not have to testify in court.

“Crime Stoppers is extremely important to the community for people who don’t feel comfortable coming forward and want to remain anonymous,” Nacogdoches police spokesman Sgt. Brett Ayres said. “We really do need anybody with information regards to this investigation to come forward and give them whatever details they may have.”

Wade-Sweat said NPD has given her as much information as they can about the case, which isn’t much. Police typically release only a few details — even to the closest of family members of victims — as investigations unfold.

“At this time we have no further information that we can release,” Ayres said Tuesday.

The mother is hoping her plea for information leads to an arrest.

“I just want justice for my son. That’s what should happen. I don’t want revenge. I just want some closure,” she said.

Wade had been a youth track star, running in the AAU Junior Olympics with Dynasty Track based in Lufkin. His mother has a photo of him draped in more medals than it looks like his young, slender frame could carry without tipping over. He might have had a college track career ahead of him, but life got in the way. He met a girl and dropped out of school to move with her to Abilene.

Then 7 and half months ago, their son, Jakowa, was born. Times got tough. The couple began to argue. The mother went to work, but Wade couldn’t because he’d lost his ID.

“He called and said he needed to come home because they were having difficulties,” Wade-Sweat said.

Wade’s plan was to get an ID, go to work for Pilgrims Pride and save money to move back with his son and girlfriend, his mother said.

“He said, ‘As a man, I want to be better than my father,” Wade-Sweat said.

Wade-Sweat had taken her son to get his ID the same day he was killed. He was planning to start work soon.

The family was supposed to sit down for a meal that night — the first since Wade came home. Wade-Sweat works two jobs in home health and hadn’t had much time to cook for the family. She’d dropped Wade off at a friend’s home on Lola Street and checked in with him throughout the day.

That afternoon, she stopped in to check on Wade, but he was nowhere to be found. She drove around he neighborhood hoping to spot him or someone who knew where he had gone.

“I passed by several times where he was at, never knowing that my child was in the woods dead,” Wade-Sweat said.

At 6:55 p.m., she got a call from Wade’s friend saying that her son had been found in the woods. Then came shock followed by pure chaos and capped off with the inevitable standing around and seemingly endless waiting that happens at most violent crime scenes. The waiting seemed like forever.

“I was in so much disbelief that I was getting sick,” she said.

Today, Wade-Sweat is helping care for Jakowa, who she said reminds her of her own son as a baby. Jakowa’s mother also recently moved from Abilene to Nacogdoches.

“I’m grateful that she allows me to be a part of his life,” Wade-Sweat said.

Anyone with information about the case is encouraged to call Nacogdoches Crime Stoppers at 936-560-4636 or visit www.ncstips.com. Tipsters remain anonymous. Crime Stoppers will pay a cash reward of up to $1,000 for information leading to the arrest of a felony suspect.

Our Turn: Tell what you know, Page 5B