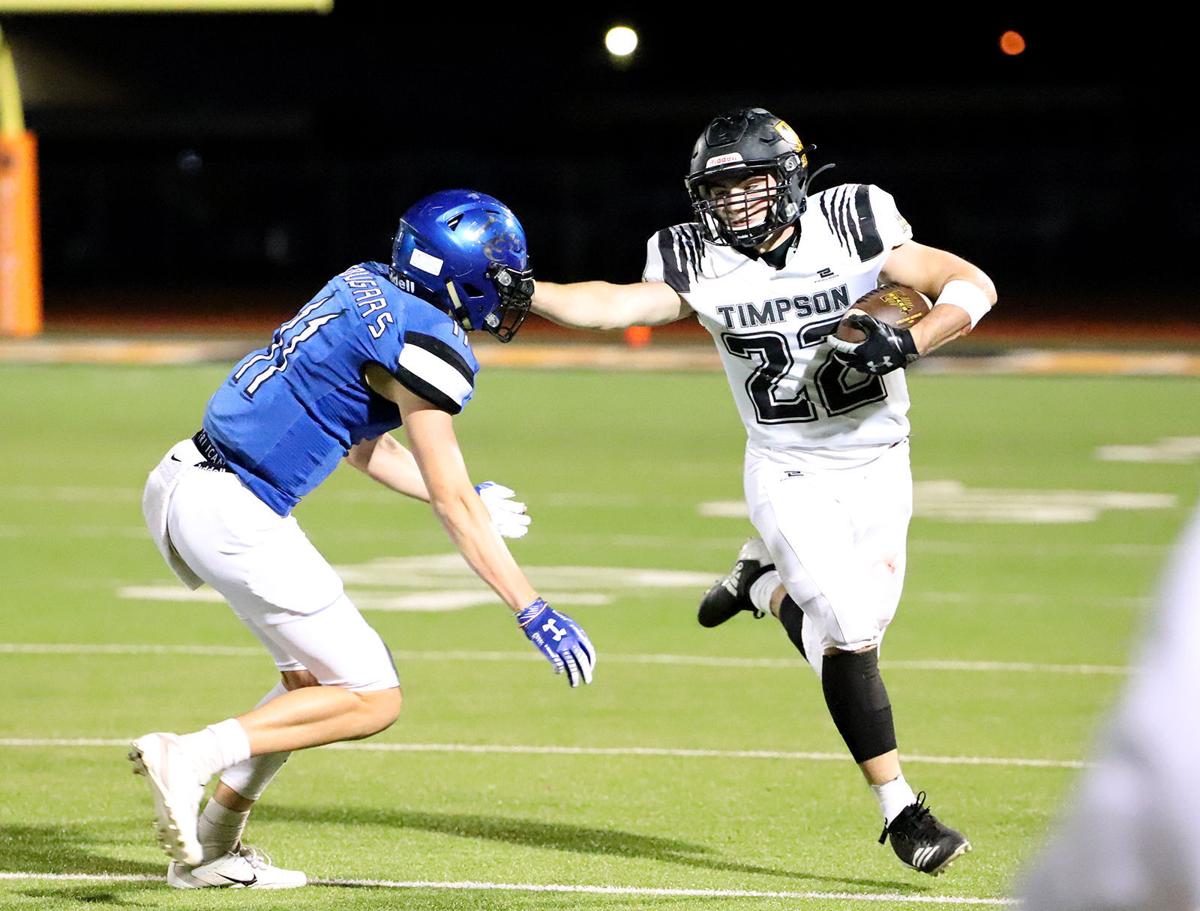 Braden Courtney (22) throws a stiff arm during the first quarter of the first half. Timpson won the matchup, 47-14, Thursday night in Palestine. 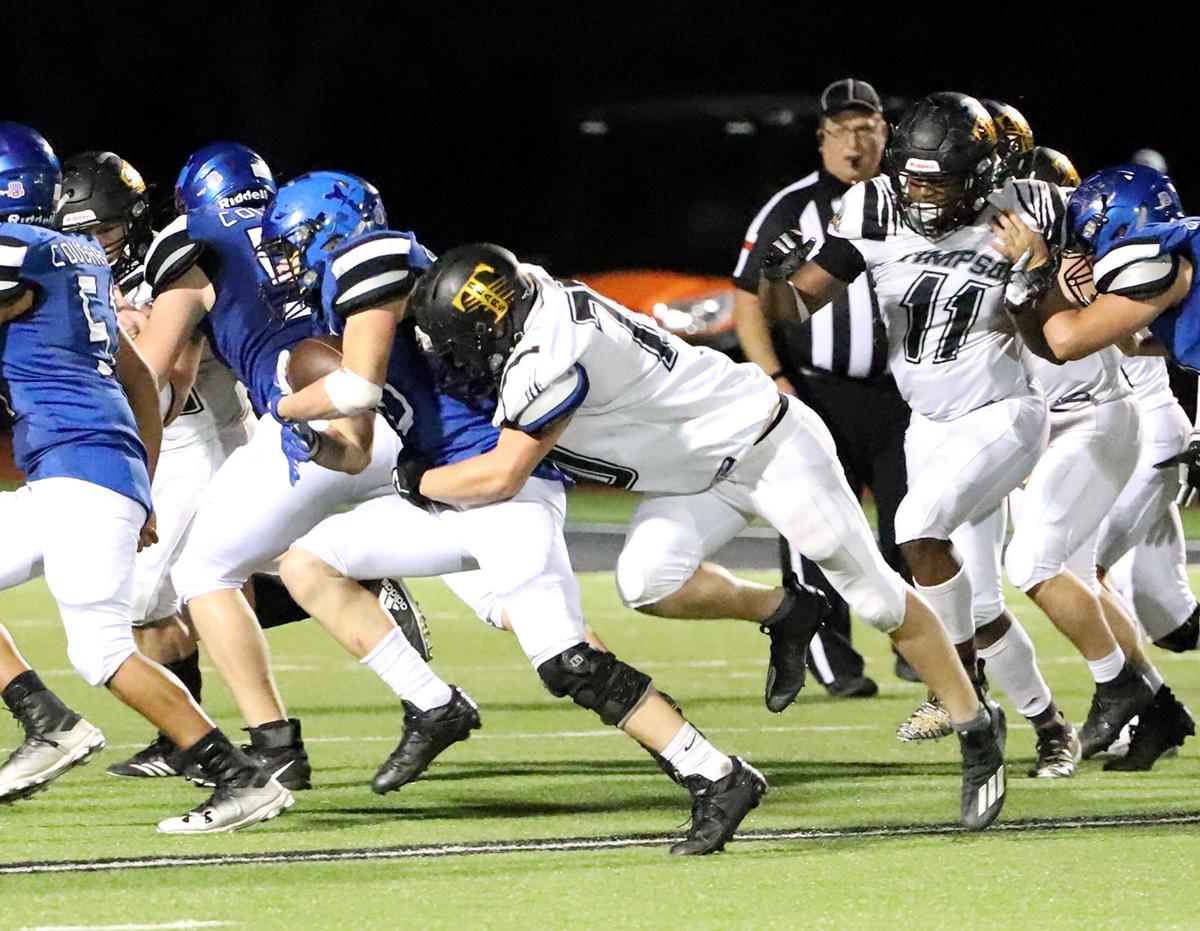 TImpson defensive lineman Logan Depaepe (70) recording one of his three sacks in the game. Timpson won the contest against Leon-Jewett, 47-14, Thursday night in Palestine. 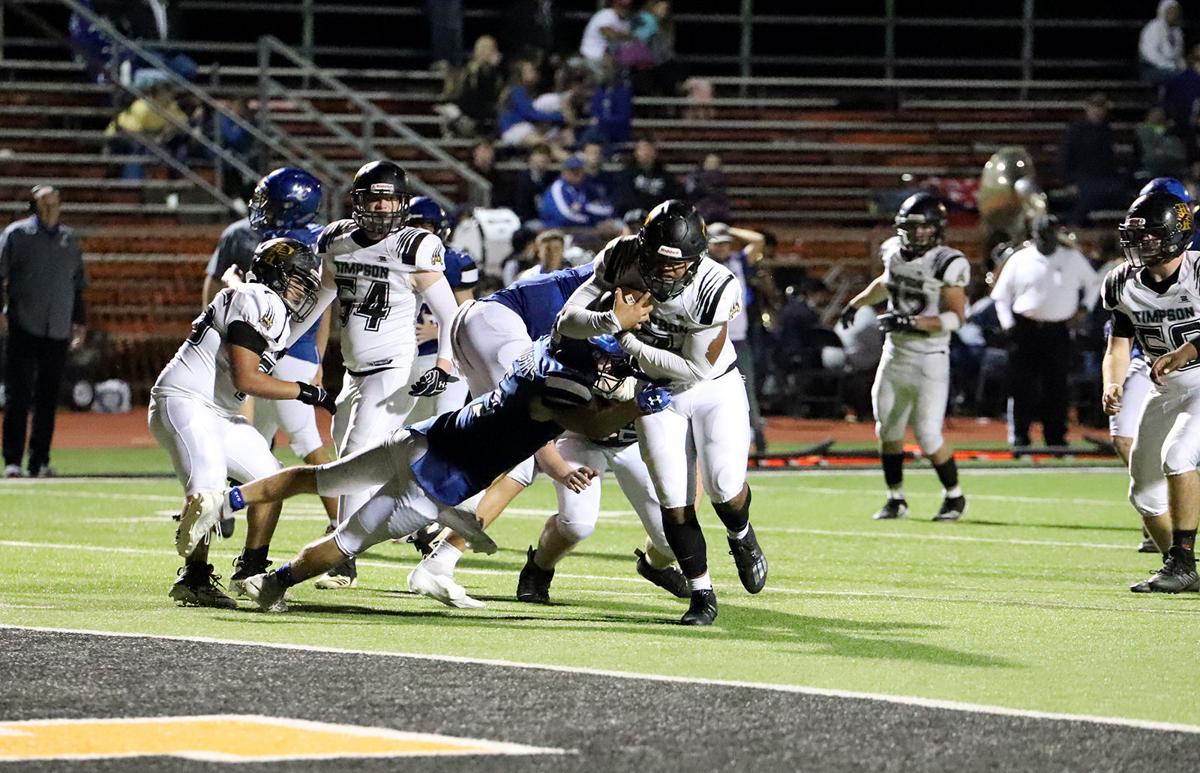 Timpson quarrterback LT Washington rumbles his way into the endzone in the fourth quarter in the Area round against Leon-Jewett. Timpson won the matchup, 47-14, in Palestine. 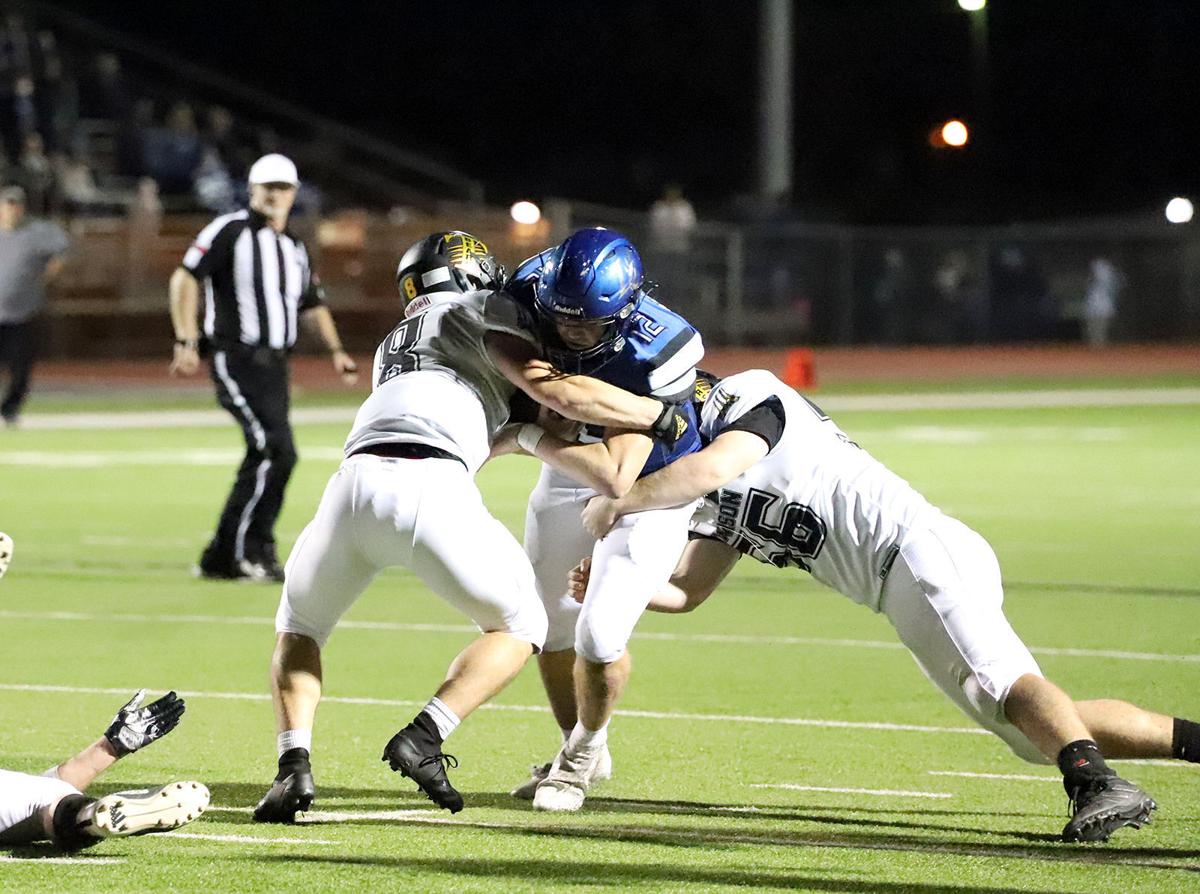 A pair of Timpson defenders tackle the Cougar quarterback near the endzone. Timpson beat Leon-Jewett, 47-14, Thursday night in Palestine. 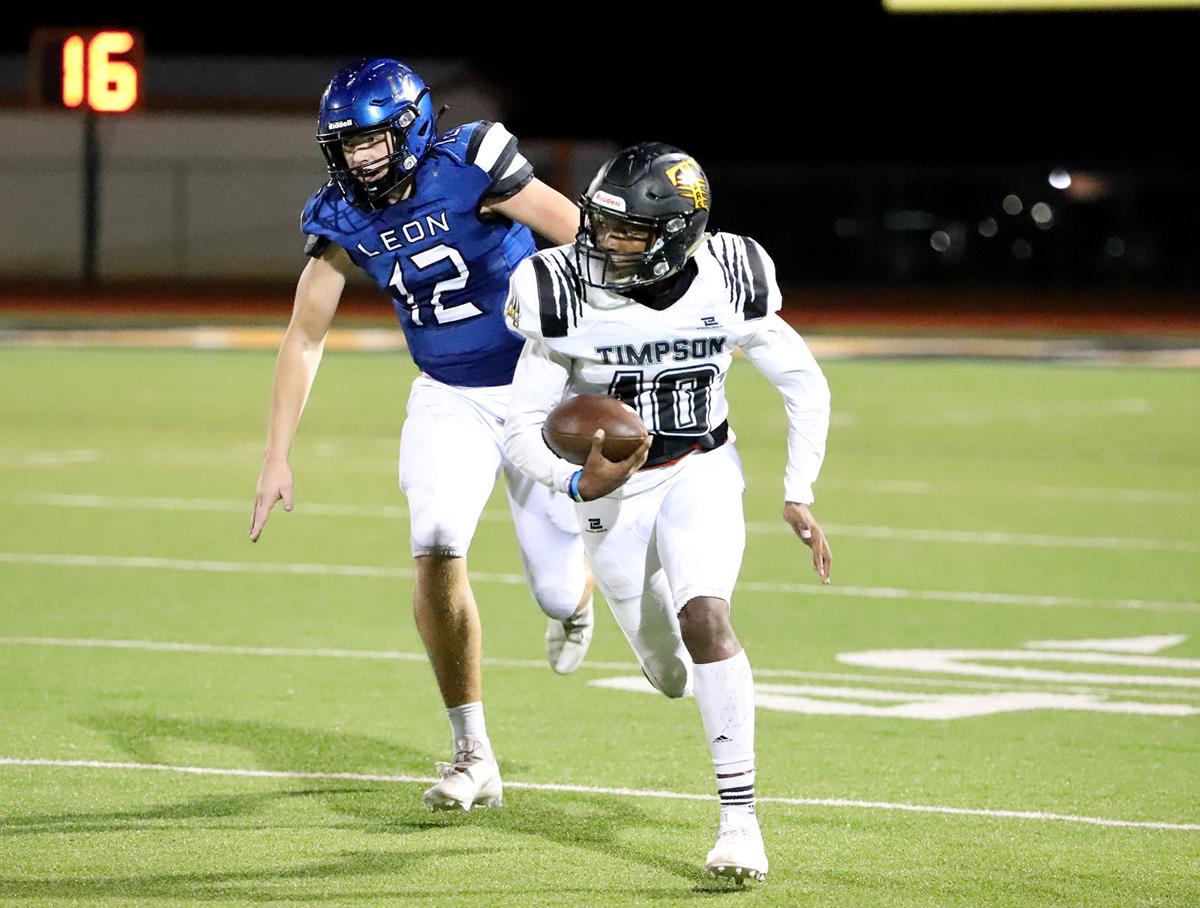 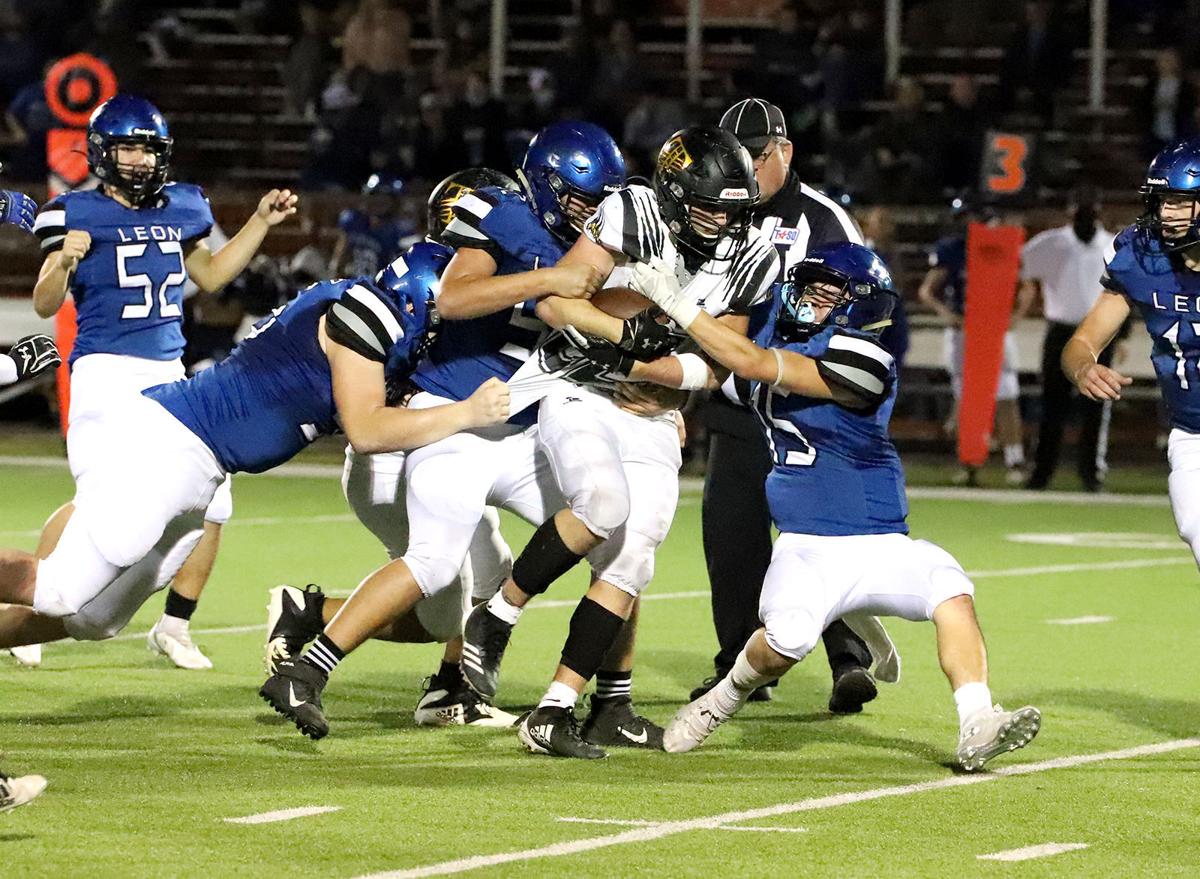 Braden Courtney (22) throws a stiff arm during the first quarter of the first half. Timpson won the matchup, 47-14, Thursday night in Palestine.

TImpson defensive lineman Logan Depaepe (70) recording one of his three sacks in the game. Timpson won the contest against Leon-Jewett, 47-14, Thursday night in Palestine.

Timpson quarrterback LT Washington rumbles his way into the endzone in the fourth quarter in the Area round against Leon-Jewett. Timpson won the matchup, 47-14, in Palestine.

A pair of Timpson defenders tackle the Cougar quarterback near the endzone. Timpson beat Leon-Jewett, 47-14, Thursday night in Palestine.

PALESTINE — The Leon Jewett Cougars were looking for some way to knock off the unbeaten Timpson Bears Thursday night in the Area round of the Class 2A DI playoffs.

They never found it.

In an effort to slow the high-powered Bear offense that was averaging 55.3 points a game, the Cougars chose to focus on the Timpson deep-threat passing attack. The result was THS junior running back Braden Courtney running for 99 yards in the first quarter and 177 in the game, while scoring three touchdowns, on 23 carries in a convincing 47-14 win over Leon at Panther Stadium.

Timpson (12-0) advances to the 2A DI Region III Semifinals next week, taking on the survivor of Friday night’s Area matchup between arch-rival Garrison and Holland. Next week’s third-round playoff will be played after Thanksgiving at a date, site and time to be determined.

Leon (7-4) had a chance at the end of the first half. Despite Courtney running for 147 yards and a pair of scores at the break, the Cougars were still very much in the contest and led for a good portion of the first two periods. Timpson outgained the Cougars 253-90 in the first two quarters, but didn’t lead until the final horn, when Logan Depaepe drilled a 25-yard field goal as the clock ticked to :00.

The reason Leon was in the game was because of Timpson mistakes. A pair of interceptions, a fumble and a failed fourth-down conversion on the Bears’ first drive were turned into 14 points for the Cougars and gave them a chance.

“I told (the team) if we just take care of the football, we’re winning the game easily (at the half),” said Timpson head coach Kerry Therwhanger after the contest. “But we had four possessions and turned the ball over three times. You can’t just keep giving decent offenses opportunities like that.

“I just told them, as bad as we’ve played, we’re still ahead. So if we come back and eliminate the mistakes, we’ll be fine.”

The Bears did just that.

Not only did Timpson not turn the ball over in the final two periods, the Bears outgained the Cougars 245-110 and made a key stop at their own 1-yard line on fourth down and turned around and drove 99 yards in six plays as Terry Bussey, who rushed for 83 yards on just two carries, sprinted the final 85 of the drive to give THS a 31-14 lead and Leon never threatened again.

Faced with a first-and-goal at the Timpson five, the Cougars could gain only four yards in the nest three plays. On fourth down, Semaj Kelley penetrated the backfield and slowed Leon’s Tyson Cornett on a run around the end and Malachi Blanton and Tyler Lane stopped him cold at the one to turn the ball over on downs.

“That (stop) was huge for our defense,” Therwhanger said. “We could have easily let down when they got that close (to the endzone), but they fought to stop them and then worked hard to get the ball out (from near the endzone) and then went and scored a big touchdown to change the momentum of the game.”

Not only did Courtney carry a big portion of the ground attack, but quarterback L.T. Washington kept the Bears’ passing game flowing, completing 9-of-18 passes for 212 yards and a score. Trey Davis pulled in four passes for 90 yards, Bussey was on the receiving end of two passes for 72 yards, including a 54-yard score in the fourth quarter, and Kelley caught three for 50 yards.

“We just tried to take what they gave us,” Therwhanger said of the offensive play selection. “They were backing out early, taking away the deep (pass) and double-teaming Terry (Bussey) a lot, so if they’re going to give us a favorable box, we’re going to take it.”

Jacob Robinson kept Leon in the game, completing 21-of-33 passes for 178 yards and a score. But the Cougar running attack was held to just 22 yards, while Robinson was sacked five times. Three of the sacks were by Depaepe.

The Bears pulled away by scoring the final 33 points of the contest after a 14-14 tie late in the half. Timpson scored 23 fourth-quarter points.

On the first play after the ensuing kickoff, Courtney broke loose for 47 yards, before he bounced in on a 1-yard run.

Leading 8-7 in the second quarter, Leon stretched the lead to 14-7 after intercepting a Washington pass and driving 33 yards for a touchdown.

But the Bears bounced back on a 51-yard scoring drive as Courtney busted in from 17 yards out. The last-second field goal gave Timpson it’s first lead, 17-14 at the half.

After Codie Cranford recovered a Cougar fumble on the third play of the third quarter, Courtney hit paydirt from 22 yards out. Depaepe’s PAT stretched the lead to 24-14 with 9:49 on the clock in the third.

Leon drove 75 yards in 17 plays, but the final play was stopped at the Timpson one. Six plays after the turnover on downs, Bussey scored on an 85-yard keeper with 10:15 left in the game, creating a 31-14 lead.

Washington later connected with Bussey on a 54-yard quick screen for a score and Washington capped the scoring with 2:49 remaining with a six-yard sneak up the middle.

GAME AT A GLANCE