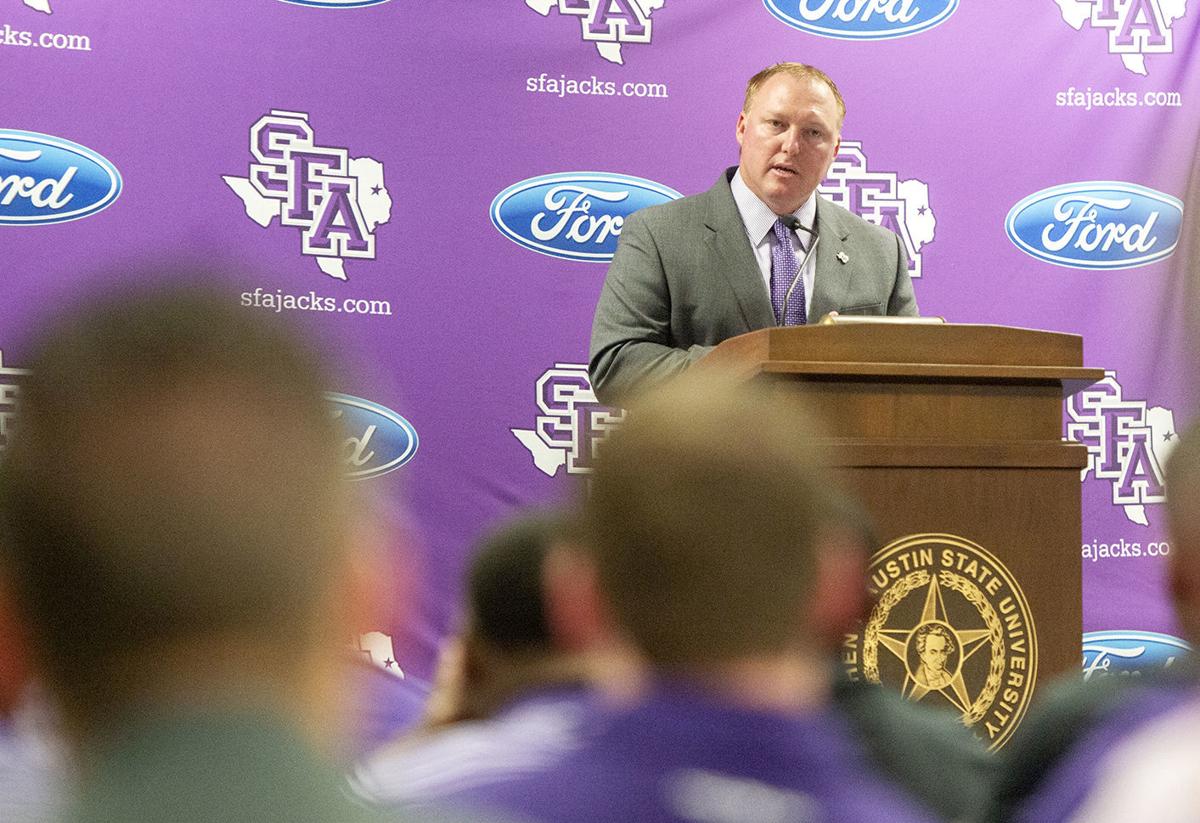 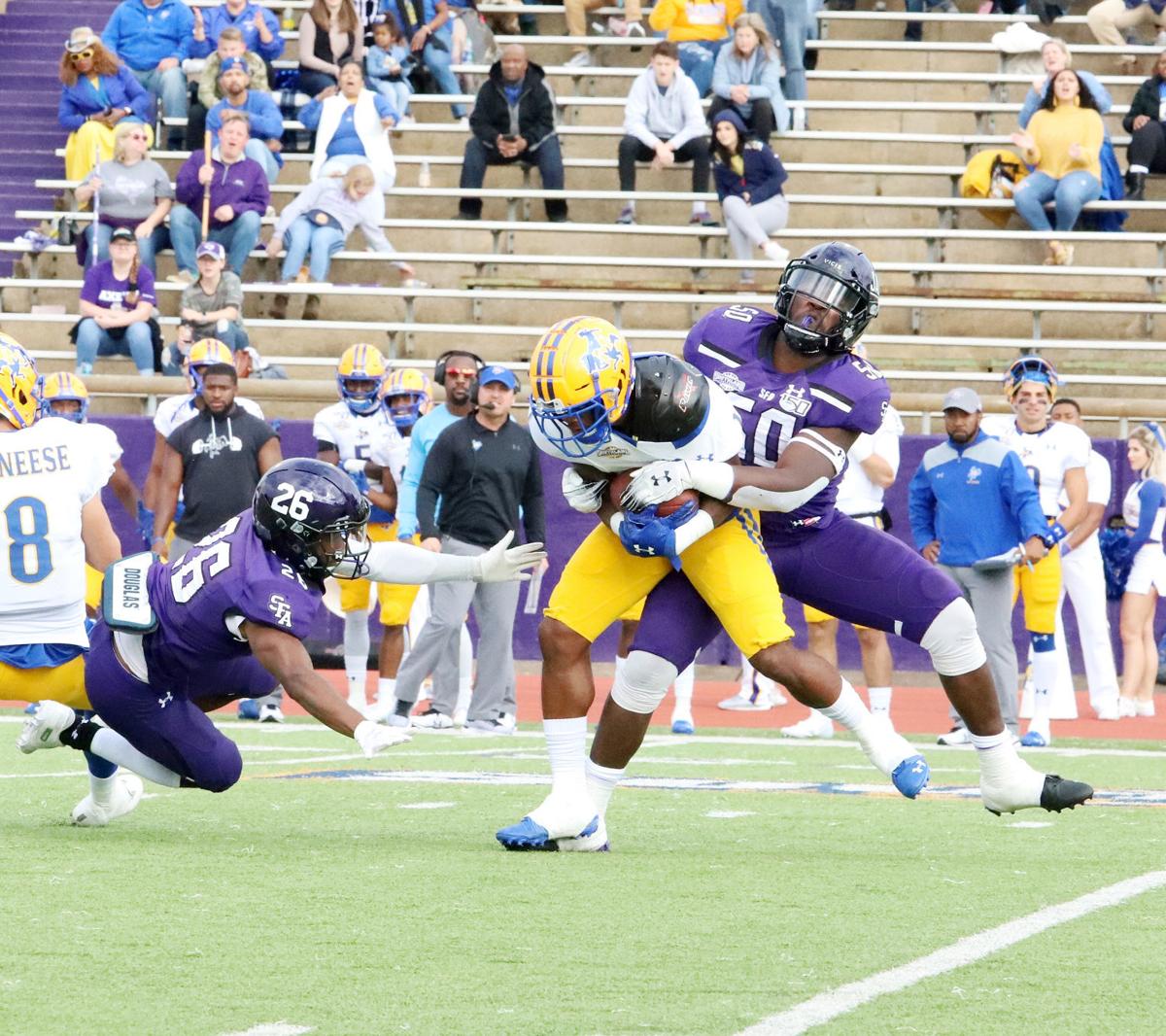 The Stephen F. Austin football program has been forced to vacate 29 wins between 2013-19 as part of the penalties handed down this week by the NCAA.

The Stephen F. Austin football program has been forced to vacate 29 wins between 2013-19 as part of the penalties handed down this week by the NCAA.

Editor’s note: This is the second of a two-part series concerning additional sanctions handed down Wednesday against the SFA athletics department for improper eligibility reporting.

After a change in athletics department personnel and a closer look at athletics compliance, two separate issues brought to light — including one from an alert intern — initiated a self investigation by Stephen F. Austin that resulted in the NCAA handing down serious penalties against the university this week.

In 2019 a newly hired assistant athletics director for compliance found a problem with a student-athlete’s paperwork. Then an intern alerted her supervisor when she found what she thought was an NCAA academic eligibility rules violation.

An NCAA investigation ensued in late 2019 and, as a result, SFA was forced to vacate 289 wins by football, men’s basketball, baseball and softball teams over a period of six years (2013-19), vacate three men’s basketball conference titles, and pay more than $94,000 in fines and more. SFA was also put on a three-year probation.

In all, 82 student-athletes who attended the university between 2013-19 were improperly certified as eligible for practice and/or competition 172 times in football, men’s basketball, baseball, volleyball, softball, women’s golf, men’s and women’s track & field and men’s cross country.

SFA director of athletics Ryan Ivey, who took over the position from Robert Hill on July 1, 2018, said the athletics department personnel responsible for the errors fell on two individuals who no longer work in the department, a former senior associate AD for compliance and a former associate AD for academics.

Fenley told the Morning News that responsibility did not lie with him; it was an academic certification issue, which didn’t fall under his purview. He said the school never contacted him about the issues.

The Daily Sentinel was unable to reach Fenley for comment. Hill, the retired athletic director, declined to comment.

The violations were discovered in June 2019, after both Fenley and McDermand had left the department.

The NCAA report published Wednesday did not identify staff members by name, but said that shortly after Ivey took over as director, several members of the athletics department announced plans to leave the department, most notably those in positions held by Fenley and McDermand.

Before their departure, Ivey hired a staff member to serve as assistant athletics director, working as an athletics academic advisor while preparing to assume the position of director of compliance after Fenley left.

Although SFA used the admissions department in academic certification, that department only double-checked the numbers already calculated by McDermand.

The admissions department had no role in determining degree applicability or progress-toward-degree evaluations, which many of the violations included. At that time, the new director of compliance was not assigned a role in academic certification and she did not learn until later that the institution erroneously certified student-athletes.

Because McDermand had a strong reputation in the athletics academic advising community, the report indicated, it presented a false sense of security that he applied all academic certification rules correctly.

When Fenley retired after nearly 30 years at SFA, he delegated additional compliance responsibilities to McDermand. In addition to those duties, he also had several other roles on campus, including teaching.

After Fenley and McDermand left, a new director of compliance took over. While in the position, a member of the football staff asked the compliance director if a current student-athlete who entered SFA as a non-qualifier could gain an additional year of eligibility by graduating in four years.

Around the same time, the director of compliance gave an intern a transcript of a football player to use as “practice” for learning academic certification rules. The intern returned to the director and expressed concern because a review showed the athlete not meeting NCAA progress-toward-degree rules.

Concerned that the university had a potential systemic issue concerning academic certification, the director of compliance contacted NCAA enforcement staff last July. She was advised to rectify all current student-athletes to ensure their eligibility to compete in the 2019-20 year.

Following the re-certification, a number of student-athletes were advised to enroll in summer classes to make up for progress-toward-degree shortfalls.

In September, Dr. Scott Gordon became the new SFA president, and after being briefed on the situation, he agreed to hire outside legal counsel. After on-campus interviews and meetings, SFA re-certified all football, men’s basketball and baseball players, along with a select few in other sports.

A serious problem in the former academic certification process was discovered. SFA had failed to consider degree applicability of transfer credits when certifying transfer athletes’ academic eligibility. Although they met transfer rules, they failed to meet the progress-toward-degree rules.

During the investigation, SFA discovered and disclosed to the enforcement staff the results of a 2014 NCAA Academic Performance Plan in which SFA athletics was notified that the university did not adequately consider degree applicability during the academic certification process in previous year. The plan didn’t indicate any specific problems and directed SFA to update its policies and procedures.

At this point in the investigation, SFA and the enforcement staff agreed that the case could be processed through negotiation resolution. SFA and the NCAA would agree on rules violated and penalties handed down to the university and there would be no appeal process.

SFA penalties from the NCAA included: 29 football, 117 men’s basketball, 112 baseball and 31 softball wins being vacated; a fine of $5,000 plus one-half of one percent of total budgets for football and men’s basketball; and 50% of SFA’s financial share earned from playing in the 2016 NCAA Tournament.

The university also had to vacate the first-round NCAA tournament win in 2016 and banners from the men’s basketball Southland Conference titles in 2015, 2016 and 2018 be removed from William R. Johnson Coliseum as the championships are ordered vacated.

The SFA football and baseball programs are banned from postseason play in their next seasons and men’s basketball will be forced to miss the postseason in 2021-22.

Ivey expressed deep disappointment for SFA and those associated with the university, but said steps have been taken for a checks-and-balances in the future so the violations and similar violations are not repeated.