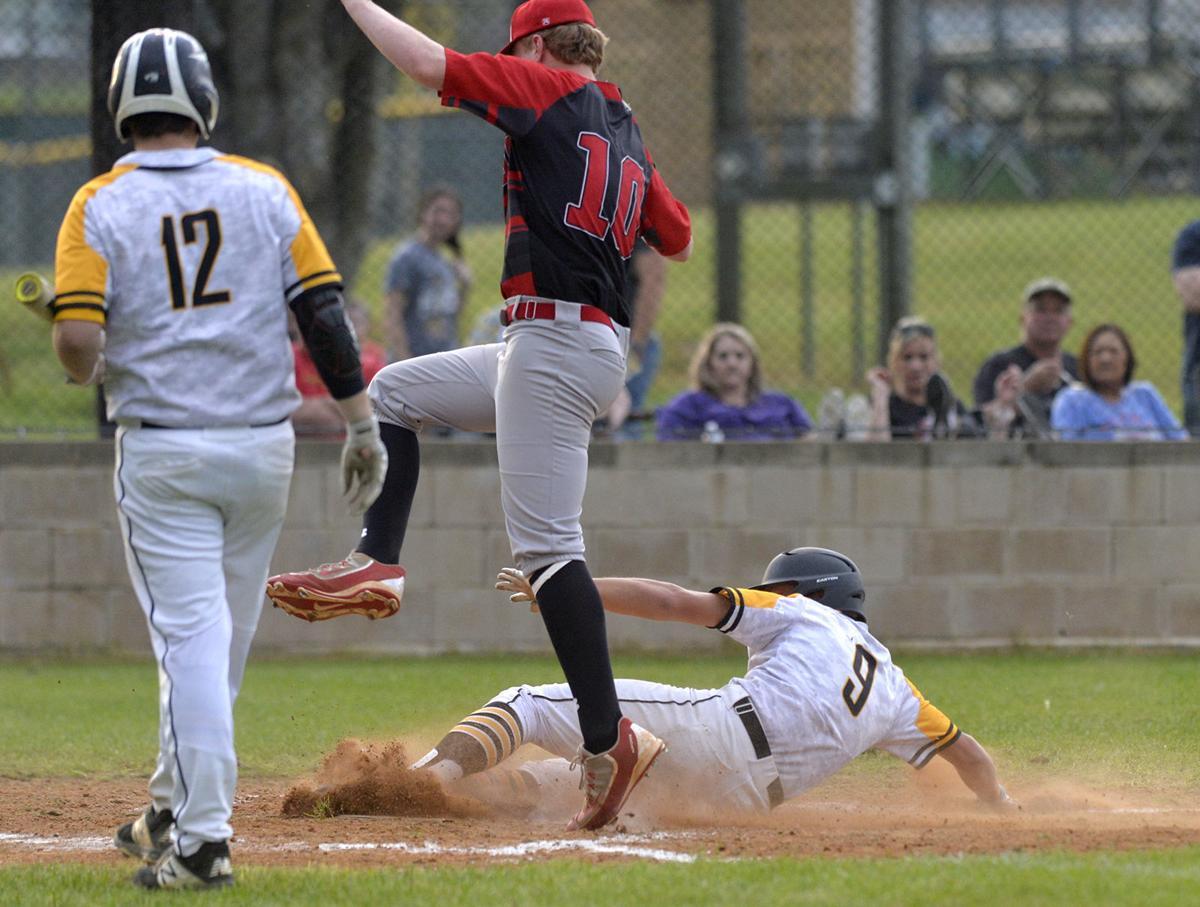 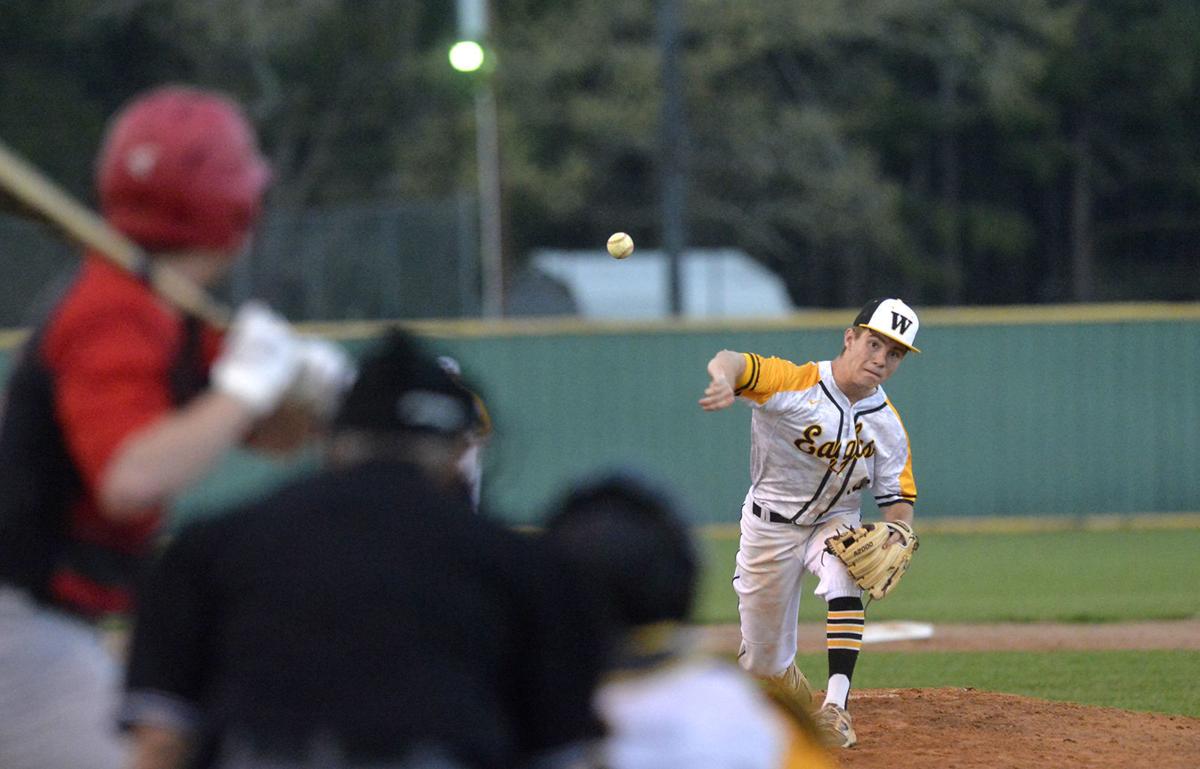 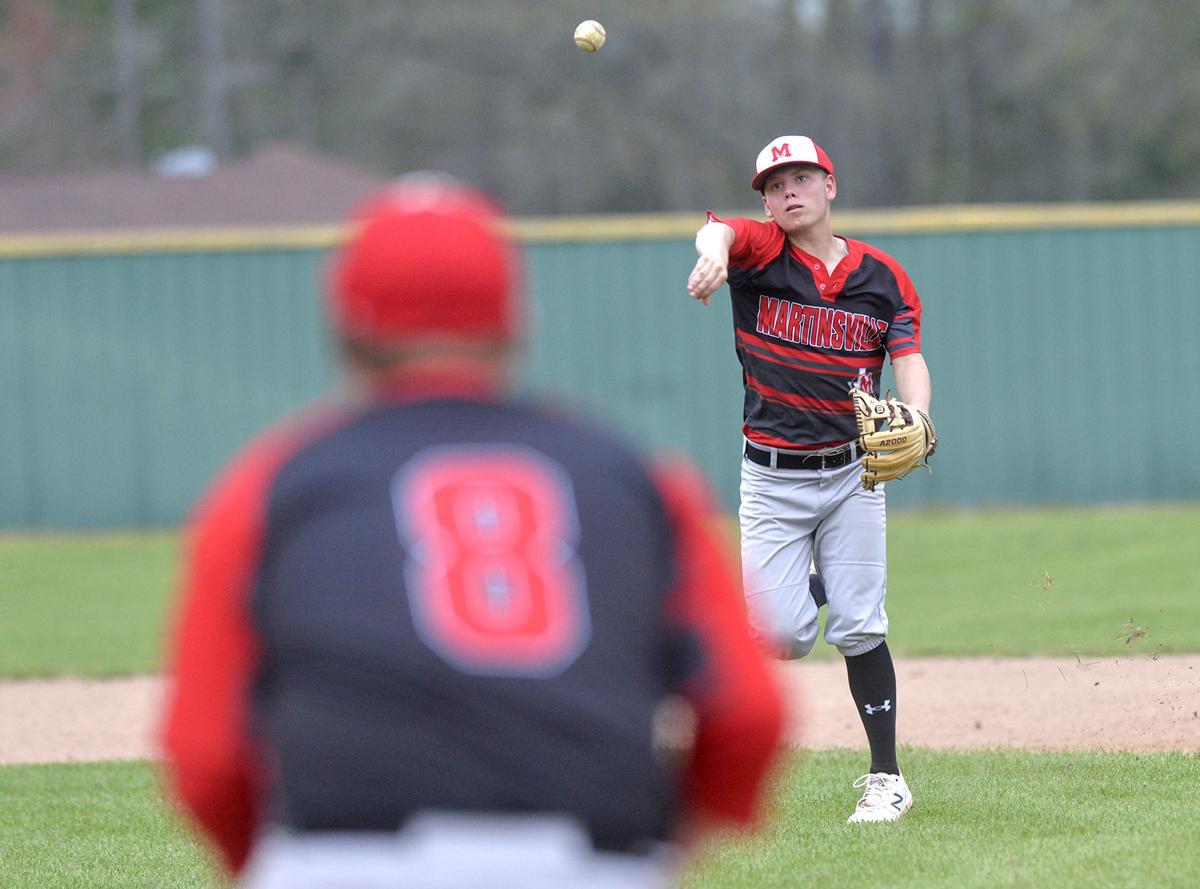 The Martinsville second baseman fires a rocket to the first baseman. The Pirates lost to the Eagles 11-1, Friday night in Woden.

The Martinsville second baseman fires a rocket to the first baseman. The Pirates lost to the Eagles 11-1, Friday night in Woden.

The Woden Eagles and Garrison Bulldogs both recorded one-sided wins on Friday in District 23-2A to lead area squads that finished up action before all Texas athletic teams were forced to take two weeks (March 16-29) off as directed by the UIL. The hiatus as a precaution with the COVID-19 (coronavirus) situation in the state and country.

Alto baseball head coach Derrick Jenkins recorded his 300th career win on Friday with the win over Trinity. The bulk of his wins (212) came when he was leading the Whitehouse program.

Here’s a rundown of action:

Woden 11, Martinsville 1 (Fri.) — The Eagles posted nine hits and took advantage of four Pirate errors to improve to 2-0 in District 23-2A action with an 11-1 victory Friday at Eagle Field.

Trenton Luna was he winning pitcher for the Eagles, with no earned runs (1 total) on five hits, 10 strikeouts and two walks.

Luna doubled in a 1-for-2 effort at the dish, with two runs scored, two walks and an RBI. Bobby Stringer also posted a two-bagger, with a run scored, an RBI and a walk. Jalen Amidon singled twice, scored three runs and drove in a run, Reid Taylor had a 2-for-4 game, with two runs and another driven in. Dylan Gaskin was a perfect 3-for-3, with two RBIs, a walk and a run scored.

Garrison 16, Mount Enterprise 0 (Fri.) — The Bulldogs improved to 7-4 on the year and 4-0 in District 23-2A action with a four-inning league win at home Friday.

Britt King posted a two-hit shutout, with 11 strikeouts and no walks to record the win on the hill for the ‘Dogs.

Crandle 9, Central Heights 0 (Fri.) — The Blue Devils were limited to one hit, while committing three errors in a setback to Crandle on Friday.

Michael Perry picked up the lone hit in the game for CHHS. Cole Brady, Branson and Jackson Glympth each gave up two hits on the hill for the Blue Devils.

Central Heights 2, Rogers 0 (Fri.) — The Devils posted eight hits and overcame an error to shut out Rogers on Friday.

DK Bush posted a double in the game, while driving in a run, while Cole Brady was a perfect 2-for-2. Ethan Bush (run), Kade Godfrey, Michael Perry (RBI) and Jackson Glympth (RBI) each chipped in singles for Central Heights.

Ryan McClellan was the winning hurler, scattering six hits in the shutout, fanning one in seven frames.

Glympth was the winning hurler, giving up an unearned run on no hits, with five strikeouts and two walks. Jax Perry also gave up no runs in one inning.

Bells 8, Central Heights 7 (Sat.) — Bells outscored the Blue Devils, 8-7, despite both teams posting eight hits on Saturday in their final game of the Franklin Tournament.

Ethan Bush doubled, scored a pair of runs and pushed in two more runs to lead the CHHS offense. Kade Godfrey added a two-bagger, with two RBIs and a run scored. Jax Perry produced a pair of singles, while driving in a run and an RBI.

Douglass 4, Caddo Mills 0 (Thurs.) — The Indians opened play at the Edgewood Tournament with a shutout win over Caddo Mills.

Christian Bates tagged a double and pushed in a run, while Wyatt Tucker and Read added singles in the win.

Tucker picked up the win on the hill, allowing just two hits with five strikeouts and a walk. Hawk added the save in one inning of work.

Edgewood 3, Douglass 2 (Fri.) — The Indians outhit Edgewood 7-6, but dropped a 3-2 decision. Watson took the loss on the hill, giving up three runs on six hits with three strikeouts.

Watson went 2-for-3 and drove in a run. Cory Melton, Jacob Bruener, Christian Bates, Harris and Hawk also had singles for Douglass.

Muenster 3, Douglass 1 (Sat.) — The Indians couldn’t overcome seven errors in a 3-1 setback to Muenster Saturday in the final day of the Edgewood tourney.

Melton, Bruener, Watson and Bates recorded hits for the Indians. Hawk was the losing pitcher, allowing three unearned runs on three hits, with four strikeouts and a walk.

Alto 12, Iola 3 (Thurs.) — Alto scored 12 runs on five hits and taking advantage of a pair of errors on Thursday over Iola.

Carter Pursley was the winning hurler, giving up a run on three hits with three strikeouts. Duplichain and Taylor Bowman also worked on the hill.

Ryan Griffitin doubled, finishing 2-for-4, with four RBIs and a pair of run scored. Todd Duplichain and Carter Pursley each added two-baggers to lead the offensive charge.

Douglass 10, Timpson 6 (Fri.) — The Lady Indians picked up their first District 22-2A win on Friday with a four-run win over Timpson at home.

Allie Grammer produced a 3-for-4 effort, while scoring twice for Douglass. Katie Perry doubled and scored a run, while Grace Leuschner singled twice and pushed in two runs and Mariah Poskey singled and picked up two RBIs.

McKenna Smith was the winning pitcher, giving up five earned runs on seven hits, with six strikeouts in seven frames.

Joaquin 9, Alto 2 (Fri.) — Abby Bernard connected with a home run and a double, finishing the District 22-2A game with a 3-for-4 effort, with two RBIs and a run scored in the seven-run loss to Joaquin.