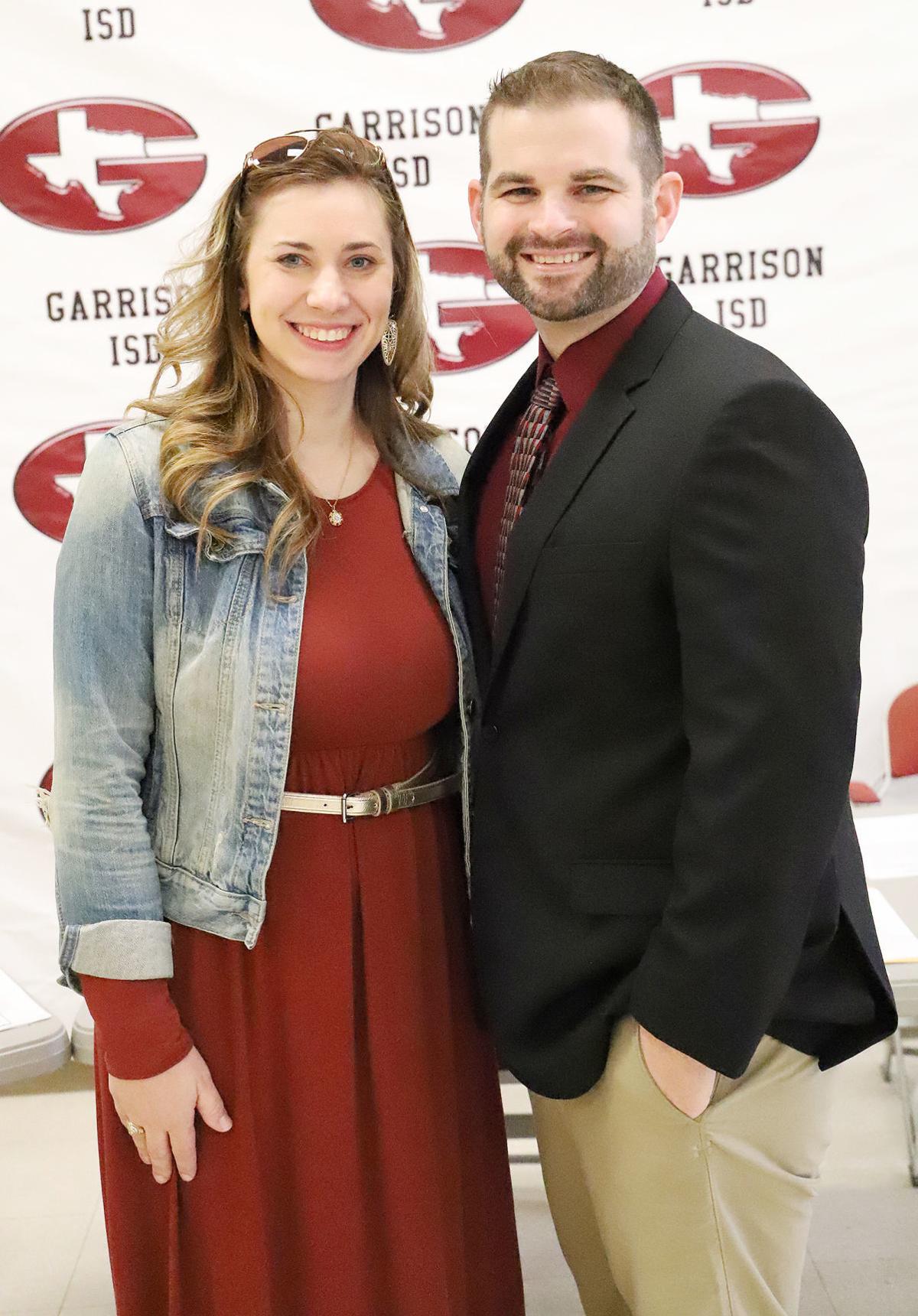 Garrison ISD has named Brandon Alvarez, 33, as the new head football coach and Athletic Director for the Bulldogs. He is shown with his wife, Whitney. They have one child, a 6-month old named Charlotte Jane.

Garrison ISD has named Brandon Alvarez, 33, as the new head football coach and Athletic Director for the Bulldogs. He is shown with his wife, Whitney. They have one child, a 6-month old named Charlotte Jane.

GARRISON — With one state championship under his belt as an assistant, Brandon Alvarez is now setting his sights on the Class 2A DI Garrison Bulldog program after being named Athletics Director and head football coach of the district at a special-called Board of Trustees meeting Thursday afternoon at the school.

Alvarez, 33, replaces Larry Prince, who coached the Bulldogs for the past four seasons, recording an overall record of 28-20, including a district championship (2018) and advancing the ‘Dogs to the third round of the postseason twice during his tenture. Prince recently took an administrator position with the district.

Alvarez is no stranger to winning and comes from a winning family. His father, Jack Alvarez, who was his boss and current head coach at Class 6A Copperas Cove, has had head coaching stints at successful programs such as Kirbyville, Ennis and West Sabine. He has a career coaching mark of 175-85 (.673) in 22 years, including a 2014 Class 5A DII Championship at Ennis.

Brandon also worked with the late W.T. Johnson at Newton. Johnson went on to win state titles in 2017 and 2018, before passing away from an illness last year. Brandon said his father and Johnson were best friends and played football in college.

Those are four aspects of a program that Brandon brings to Garrison and hopes to continue the success the Bulldogs’ program has experienced over the years.

“Garrison is a football town,” Brandon said after the meeting at which he was officially hired. “Garrison is known for its football. They’re known for having tough kids. They went to the third round of the playoffs for two years in a row (2017 and 2018) recently. That’s an exciting winning culture.

“East Texas is known for having tough kids. East Texas is where I want to be. I’m from southeast Texas, but I love East Texas. I went to school at SFA, so I love the area. And having a chance to come back and coach in the area is exciting to me.

In 2014 he began a four-year stint at Ennis, helping the football program to the state title, then becoming the offensive coordinator of the team his final two seasons. He moved on with his father to Copperas Cove and has spent the last two seasons there.

Brandon said his father told him he felt he was ready to become a head coach three years ago, but now the time is right for him.

“My dad told me three years ago that he thought I was ready, but going to Copperas Cove with him and rebuilding the program will help me coming into this program at Garrison,” Brandon explained. “This isn’t even the same situation as that one because I’m not taking over a program that has to be rebuilt. This is taking over and continuing a winning tradition.”

Brandon said taking over at this point of the school year will enable him to implement his off-season program, work with the 7-on-7 this summer and implement his offensive and defense schemes.

“As far as defensive schemes, I like the 4-3 or the 4-2-5 because I feel it’s the best scheme for ‘stopping the bleeding,’” the new Garrison coach said. “If you’re really good you play man and shut people down, but if you’re playing somebody more athletic and you want to keep them in front of you, you can do it better with a 4-3 or 4-2-5.

“Offensively, my core plays are my core plays, but I will do what my kids execute the best. I believe in being in multiple sets. Make the defense completely uncomfortable so they have to do their homework and they have to learn to line up to you. If you do that you get their base defense more.”

Alvarez said he will switch up the tempo to keep the speed of the game in his team’s favor.

“I want to come in and build relationships with the kids and really get to know them, as well as implementing my off-season so we’re not rushing as we go into the summer,” he said.

And, have no doubt, he has big plans for the keeping Bulldog football a winning tradition, like the tradition that has seen Garrison post a 90-43 record (.677) in the last 11 seasons, including eight winning seasons.

Brandon and his wife, Whitney, have one child, a six-month-old daughter named Charlotte Jane.