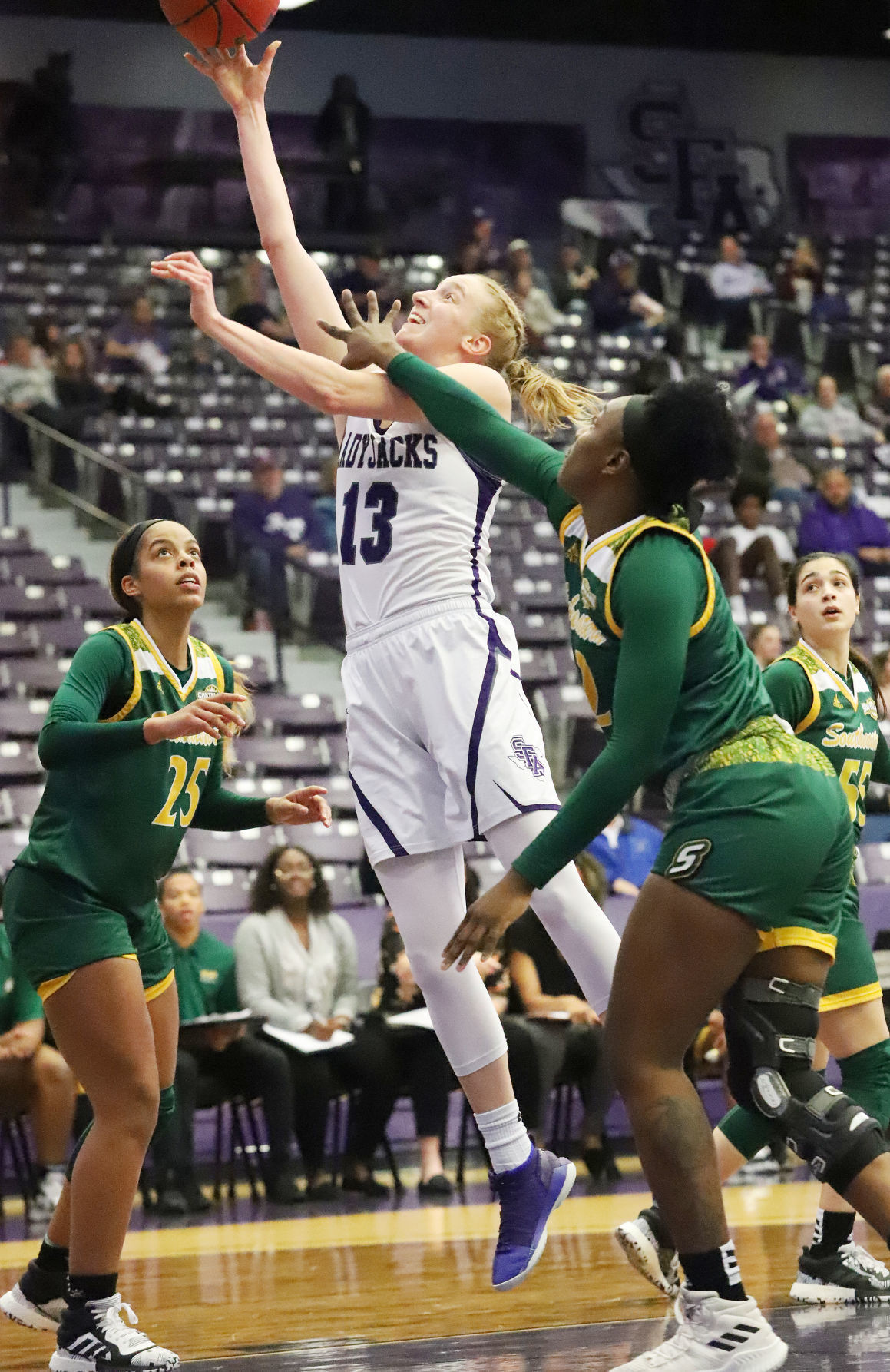 Stephen Austin sophomore guard Stephanie Visscher (13) puts up a shot while being guarded by Southeastern Louisiana’s Jyar Francis during the first half of Thursday night’s Southland Conference matchup in William R. Johnson Coliseum. 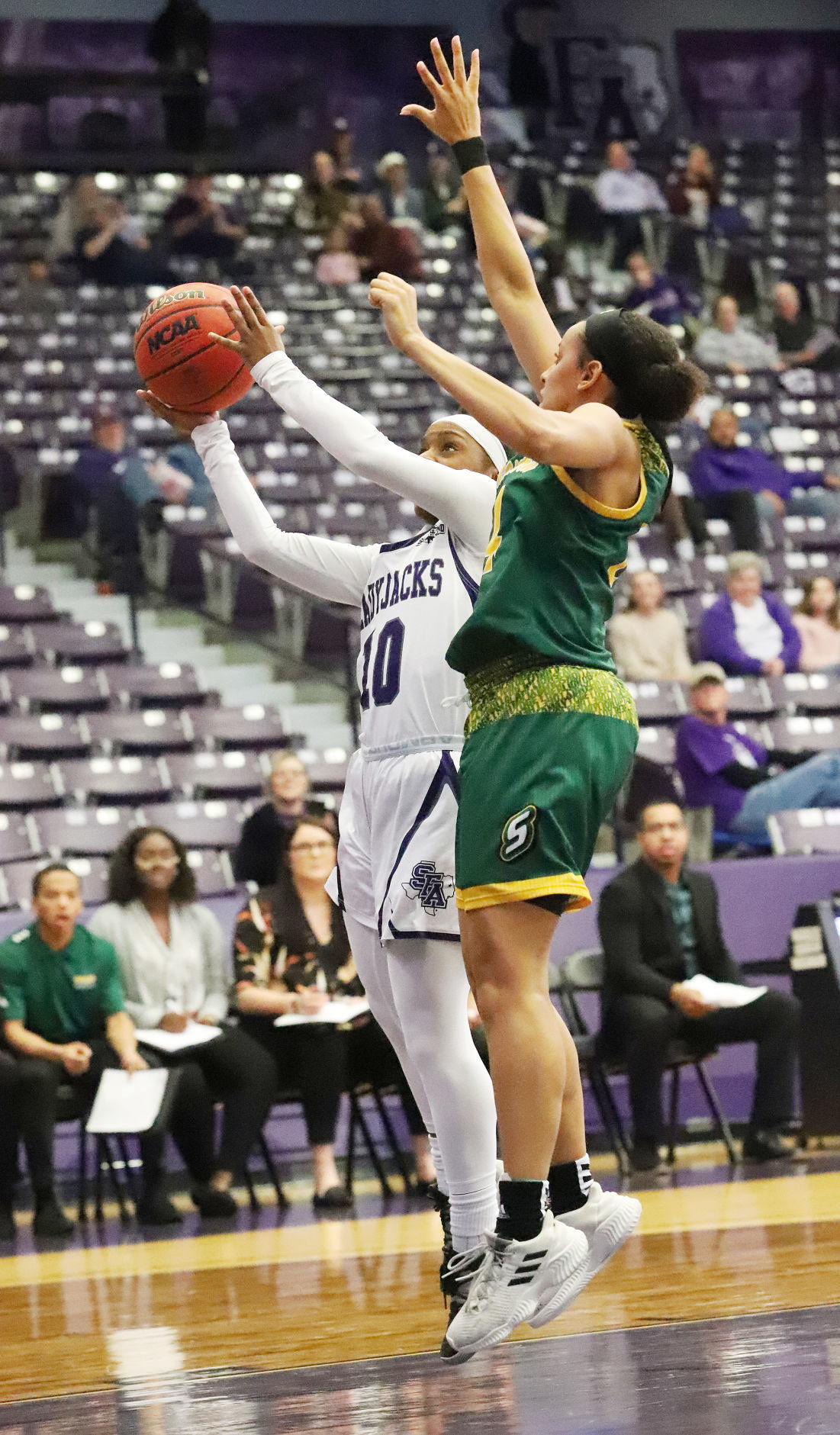 Stephen F. Austin sophomore guard Brianna Michell (10) puts up a shot in the paint while being guarded by Southeastern Louisiana's Tyler Morrison during the first half of Thursday night's game in William R. Johnson Coliseum. 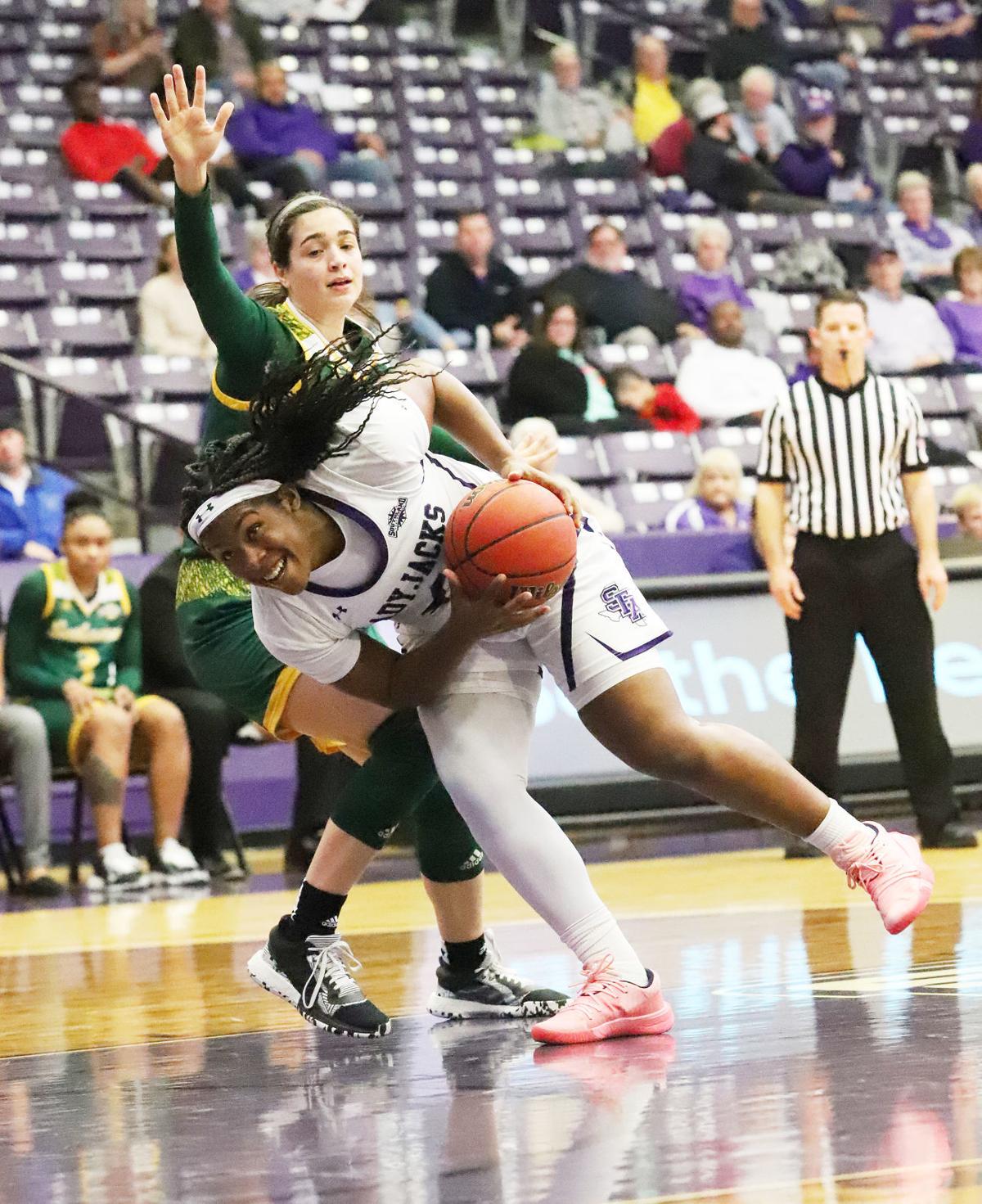 Stephen F. Austin redshirt senior Kennedy Harris drives toward the basket while in traffic in the first half of Thursday night's Southland matchup in William R. Johnson Coliseum. 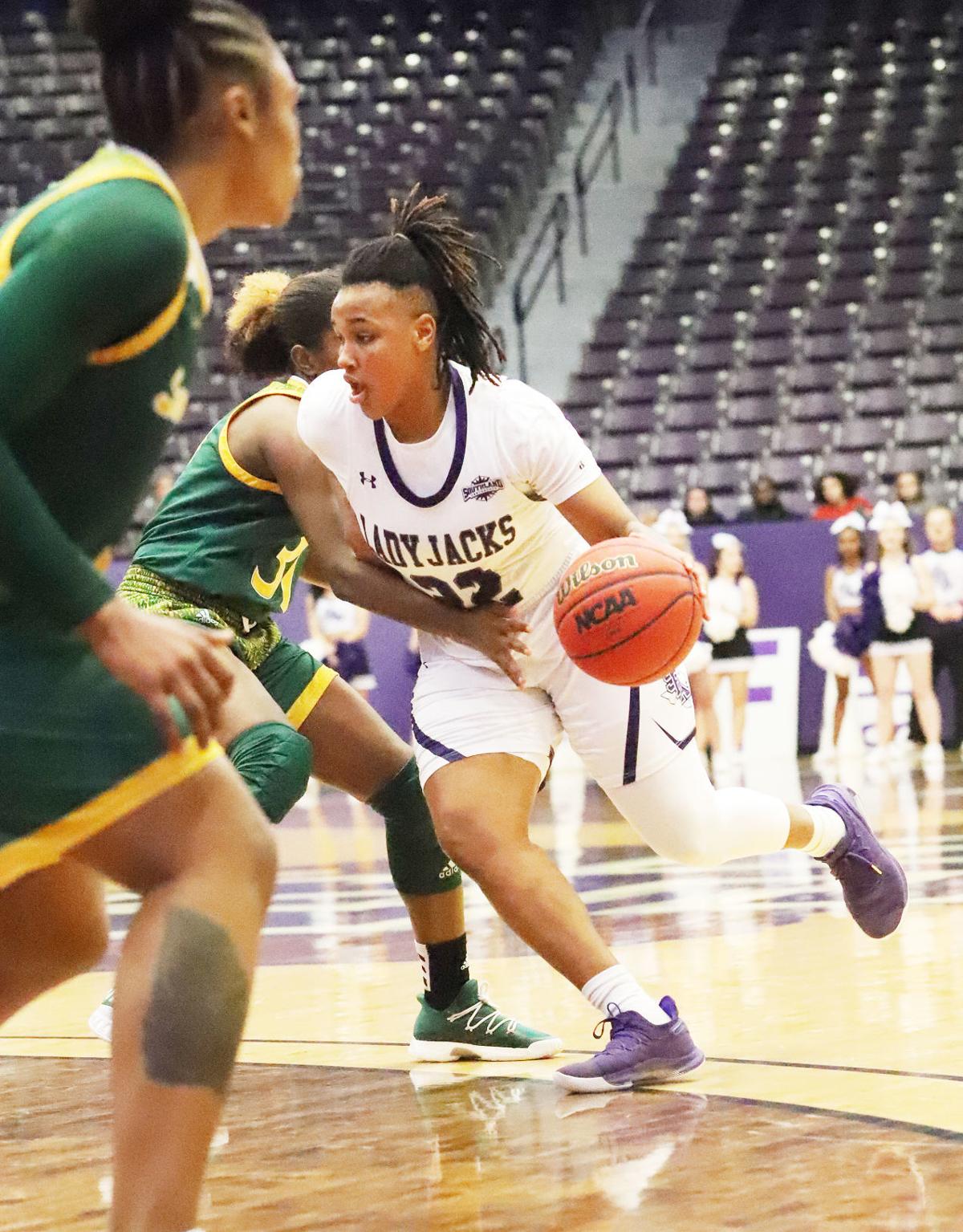 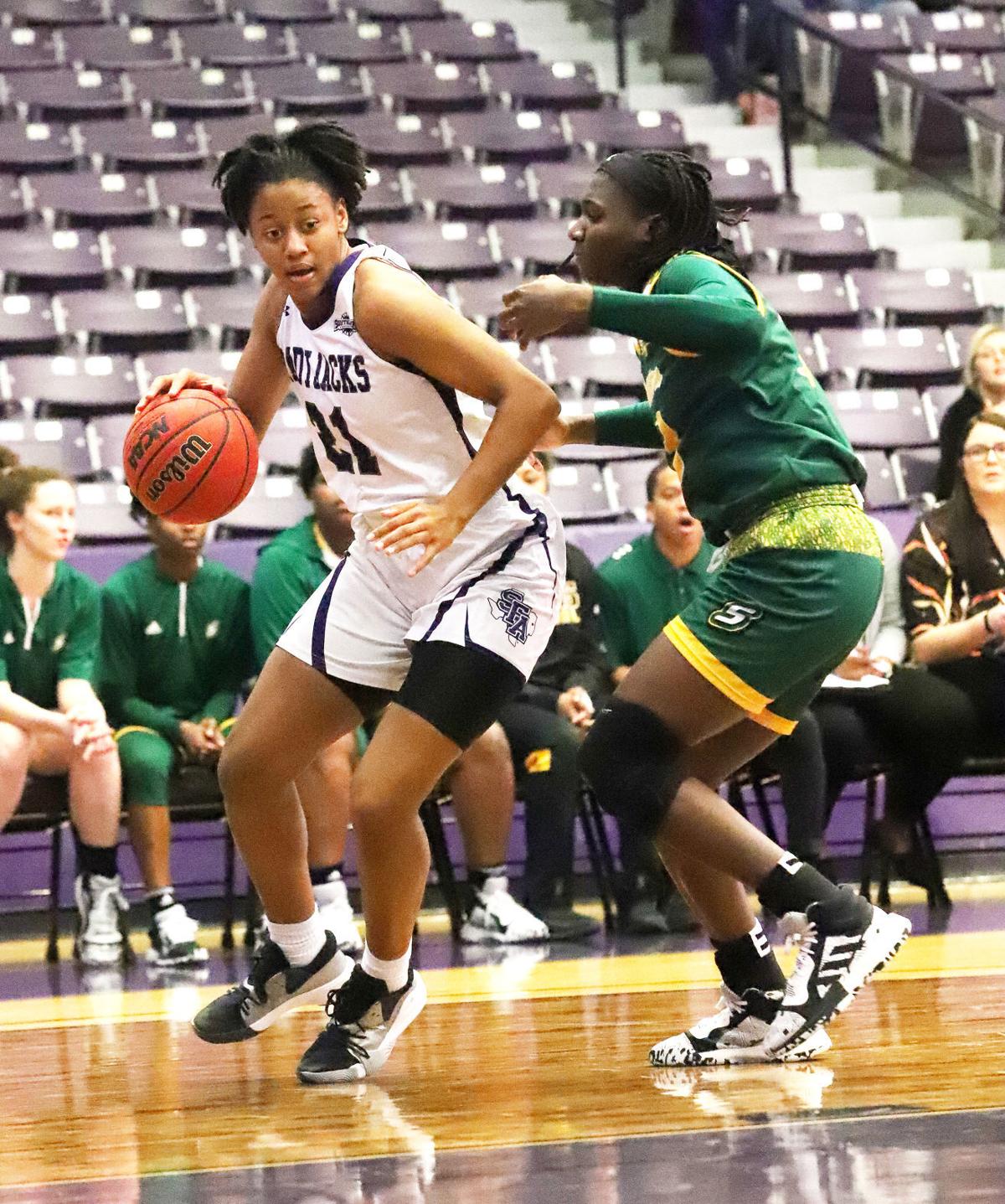 Stephen Austin sophomore guard Stephanie Visscher (13) puts up a shot while being guarded by Southeastern Louisiana’s Jyar Francis during the first half of Thursday night’s Southland Conference matchup in William R. Johnson Coliseum.

Stephen F. Austin sophomore guard Brianna Michell (10) puts up a shot in the paint while being guarded by Southeastern Louisiana's Tyler Morrison during the first half of Thursday night's game in William R. Johnson Coliseum.

Stephen F. Austin redshirt senior Kennedy Harris drives toward the basket while in traffic in the first half of Thursday night's Southland matchup in William R. Johnson Coliseum.

Sophomore guard Stephanie Visscher showed she is much more than just a scoring machine Thursday night — although there was no doubt she kick-started Stephen F. Austin in that respect in the third quarter. Visscher recorded a double-double, with 17 points and 15 rebounds, to keep the Ladyjacks unbeaten in Southland Conference play with a 77-51 win over Southeastern Louisiana here in William R. Johnson Coliseum.

The Southland-leading Ladyjacks (10-2, 3-0 SLC) posted their eighth straight victory, while posting their sixth win in seven games at home to stay in first place in the league chase. Southeastern Louisiana dropped to 4-8 on the year and dipped to 1-2 in Southland action.

Visscher, along with junior guard Marissa Banfield, kept the Ladyjacks in front at the half, as Banfield hit 4-of-5 from behind the three-point arc to finish the first 20 minutes with 12 points, while Visscher led the SFA work on the boards — as the Ladyjacks tallied 20 at the half — and a 34-26 lead.

“I liked our effort, overall, for 40 minutes, but it was kind of like the first half was a ‘feel it out’ situation for some reason,” said SFA head coach Mark Kellogg after the game. “I didn’t think our tempo and flow was as good as it was in the second half. But I think we were just trying to figure them out a little bit. But I also thought we were competing.”

“Marissa got going a little bit in the first half to get us going, and Stephanie’s rebounding helped us,” said Kellogg about the first-half effort. “I thought we were really good on the glass.

“And I thought we settled in well in the second half and we really efficiently ran our offense and had a lot of assists.”

But Visscher caught fire in the third quarter, scoring 11 of the Ladyjacks’ first 13 points, while finishing the quarter with 15 points to help SFA widen the scoring advantage to 54-37.

“(Stephanie) got a little more aggressive in the second half offensively,” the coach said. “And we were moving around her. I thought she did a good job of cutting and moving without the basketball.

“In the first half we were standing around a little too much, so they were taking away some of that space where she wanted to cut and move.

“I thought we were much better offensively (in the second half). Our spacing was much better, we were screening better, and I thought that allowed her to have opportunities to do what she did.”

Stephen F. Austin controlled the game — and the Lady Lions — by dominating the rebounding department. The Ladyjacks won the battle of the boards, 42-24 — including 22-11 in the final two periods — as SFA had the upper hand of 20-11 and 23-14 scoring in the final two quarters.

In addition to Visscher’s strong statistical night, Banfield scored 15 points and dished out a pair of assists, while freshman Zya Nugent added 13 points on 4-of-5 shooting from the field and 2-of-3 three-pointers. She also added four boards. Aaliyah Johnson and Aiyana Johnson both produced seven points, with Aiyana adding six rebounds and four assists, while Aaliyah chipped in four rebounds.

Alexius Horne led Southeastern Louisiana with 17 points on the night, hitting 7-of-11 from the field. Jyar Francis chipped in 13 points and Celica Sterling scored 10.

The Ladyjacks scored a lot of their points in the paint, outscoring their Lady Lion counterparts 40-22 in that category. Except for a three-pointer by Visscher to start the third quarter, all of SFA’s points scored in the period were in the paint. They also had 12 more points in the lane in the fourth period.

SFA only committed nine fouls in the entire game, resulting in only six free throws in the contest by SELa. The Ladyjacks sank 11-of-18 from the line.

“Another piece (of success) that we don’t talk about much is we’re about 10th or 12th in the nation in (the least) total fouls,” Kellogg said. “When we’re not fouling and we’re getting rebounds, which is points we’re not giving our opponents.”

UP NEXT FOR THE LADYJACKS

SFA will not have much time to prepare for its next opponent as the Ladyjacks go on the road to battle New Orleans (5-7, 1-2 SLC) Saturday at 4 p.m. inside Lakefront Arena. The game will be broadcast for free on the Privateer Sports Network (unoprivateers.com/watch).