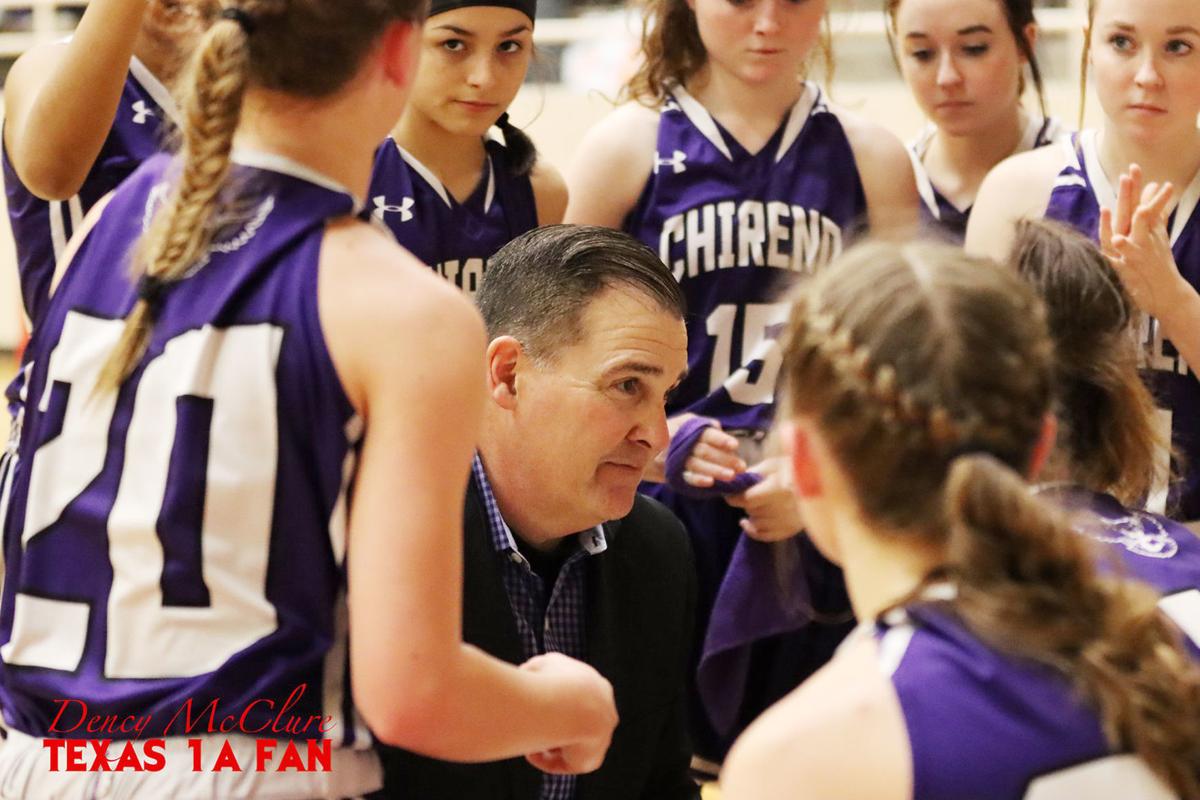 Chireno Lady Owl head coach Giff Durham talks to his team during a timeout during the Class 1A Region IV Championship game against LaPoynor in Burger Gym in Austin on Saturday. 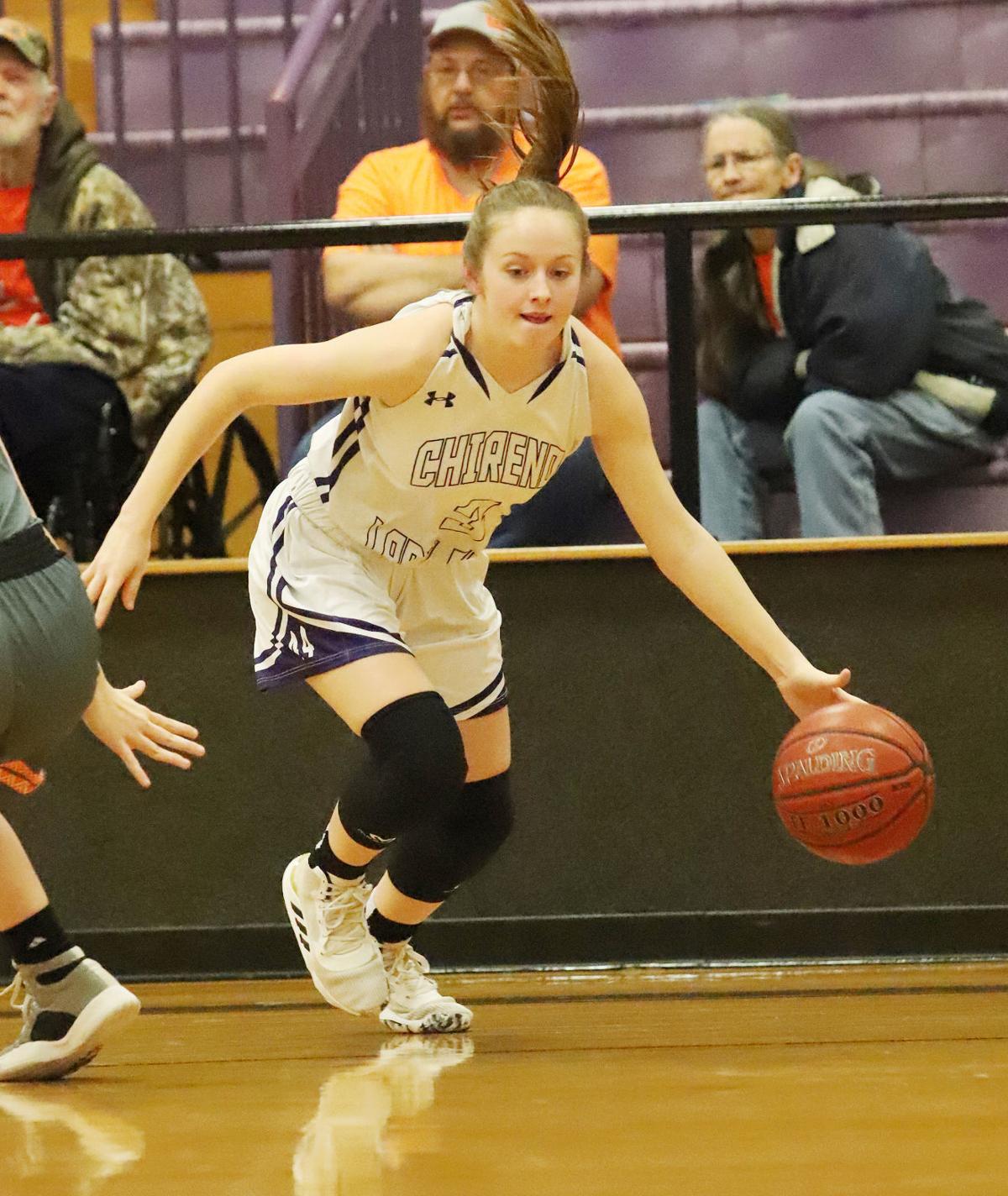 Chireno Lady Owl sophomore Jessie Durrett dribbles up court during regular season action during the 2019-20 season. Durrett and the Lady Owls will play Lipan (33-3) in the UIL State Semifinals Thursday in the Alamodome.

Chireno Lady Owl head coach Giff Durham talks to his team during a timeout during the Class 1A Region IV Championship game against LaPoynor in Burger Gym in Austin on Saturday.

Chireno Lady Owl sophomore Jessie Durrett dribbles up court during regular season action during the 2019-20 season. Durrett and the Lady Owls will play Lipan (33-3) in the UIL State Semifinals Thursday in the Alamodome.

SAN ANTONIO — Don’t be surprised if Chireno head basketball coach Giff Durham doesn’t have a tape measure in his duffle bag and brings it out on the morning when his 20th-ranked Lady Owls walk into the 64,000-capacity San Antonio Alamodome as they prepare for the 2020 UIL Class 1A State Championship semifinal against No. 3-ranked Lipan, which will be played at 8:30 a.m. Thursday.

Durham might tell senior Nelly Vargas to put Lexie Mooney — two of seven seniors on the team — on her shoulder and measure the distance from the rim to the floor. Then he’ll ask Jaleigh Johnson to tell him how far it is to the floor. “Ten feet,” she’ll say.

Then Durham might ask Alli and Emma Bennett, two more seniors on the squad, to measure the distance from the rim to the free throw line. “How far?” Durham will ask. “Fifteen feet,” Emma will answer.

Like the 1954 Milan High School team that overcame all the odds in Indiana found out, the court in the Alamodome, which will seat 20,662 fans for Class 1A-6A semifinal and championships Thursday through Saturday, Durham’s Lady Owls might be in position to claim the small East Texas school’s first-ever UIL State Championship this week.

The Lady Owls advanced to the 1A Region IV Championship game a year ago, only to be defeated by a tough Moulton team, 34-30.

Most of the girls that played on the 2018-19 CHS basketball team also played on the Lady Owl softball team. Last spring Chireno, which has only 102 high school students and 335 in Pre-K through 12, advanced to the state softball semifinals and then came from behind to defeat Gail Borden County, 14-8, before losing a heartbreaker to D’Hanis, 9-7, in the title game.

Eight of those players — including four seniors — from that softball team are on the 12-player roster for this year’s basketball team that overcame a 17-point deficit in the 1A Region IV Semifinal to overcome Fayetteville, scoring 46 second-half points in a 58-52 thriller and then captured the region with a 56-45 victory over No. 17 LaPoynor.

“I think last year’s comebacks the girls made and the number of girls that play basketball, as well as softball, carries over and they developed a never-say-die and never-quit attitude and they believe it’s not over until it’s over,” said Durham, who has coached the basketball and softball programs. “That’s what I told them the other night (against Fayetteville), that we have to take it one possession at a time and stay after it and (the game) isn’t over until it’s over.

“They totally believe that and battled back and never quit on me. That’s the kind of players they are.”

Chireno (27-9) will be making its second-ever trip to the state tournament, the first time coming just four years ago (2016), before Durham was hired at the school and his present team members were high school players. They will take on a Lipan squad that will be making its eighth appearance. The Lady Indians were also in the state tournament in 2016, along with four of the previous six seasons before that.

Durham said he doesn’t think his players will be intimidated by playing in a large facility like the Alamodome.

“They haven’t played in a gym that big, but they have great mental toughness and they’re going to go out there and give it everything they’ve got and get after it,” Durham said. “It’s like the movie Hoosiers; the opponents are as good as they’ve always been and the court is the same size and the goals are the height and the free throw line is still 15 feet from the basketball. They just have to go out there and get after it.”

The winner of the Chireno-Lipan game will battle the survivor of No. 1 Nazareth (29-8), a 29-time state participant — including the last six seasons — and Veribest (27-10), which is making its first appearance.