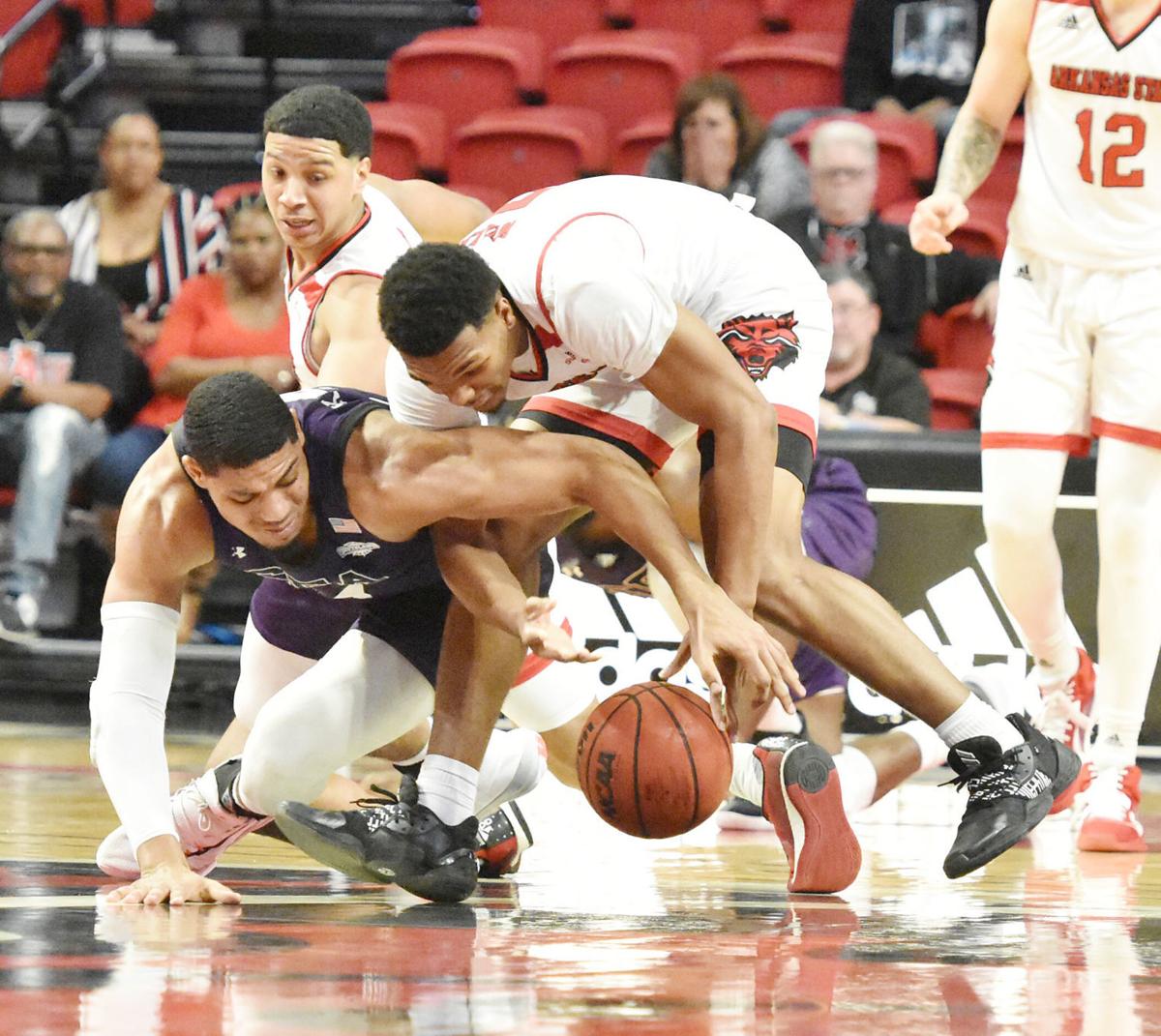 Stephen F. Austin junior forward Gavin Kensmil, left, battles with an Arkansas State player for a loose ball during Saturday afternoon’s game in First National Bank Arena in Jonesboro, Ark. SFA won the game, 76-57, to improve to 6-1 on the year. 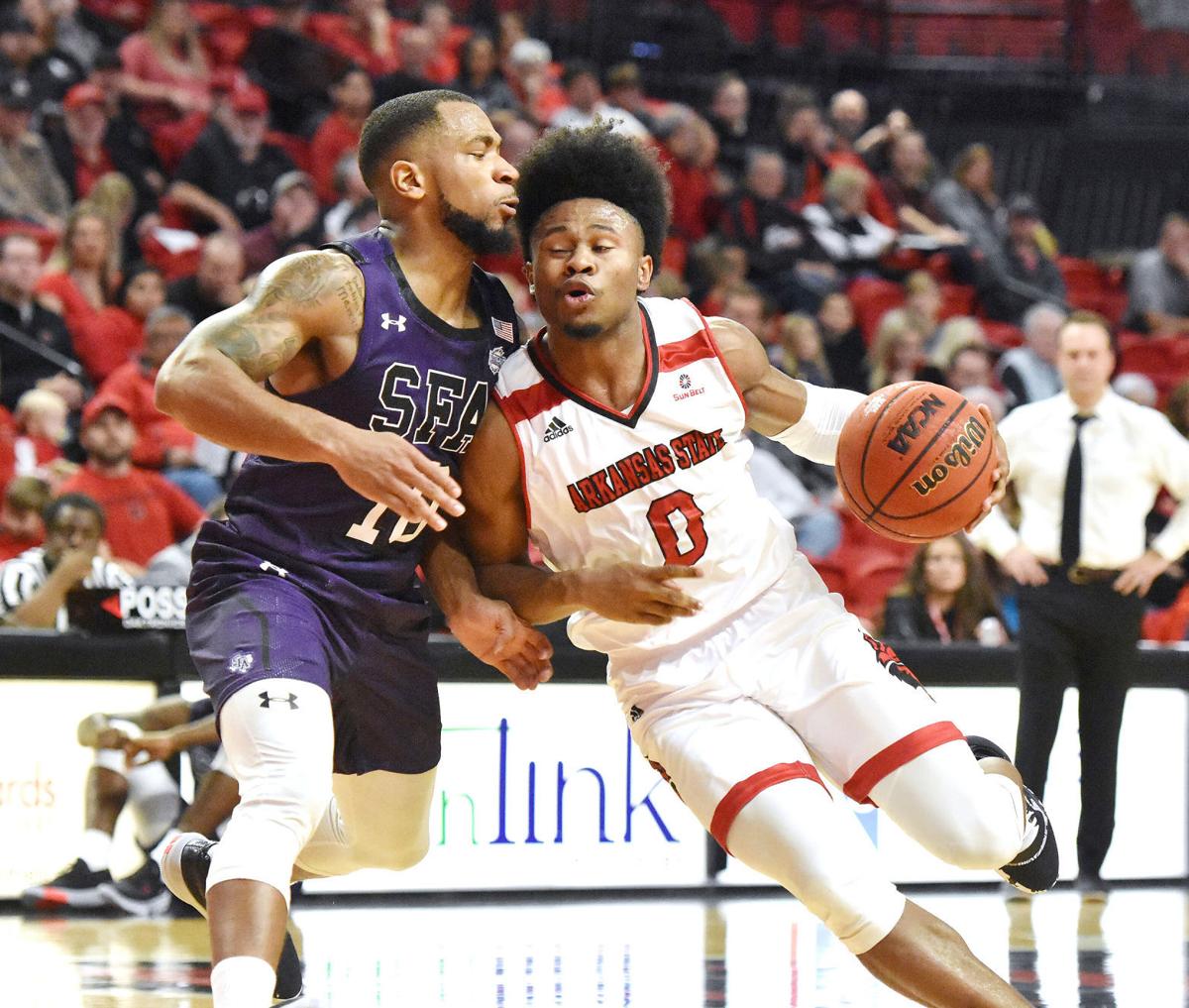 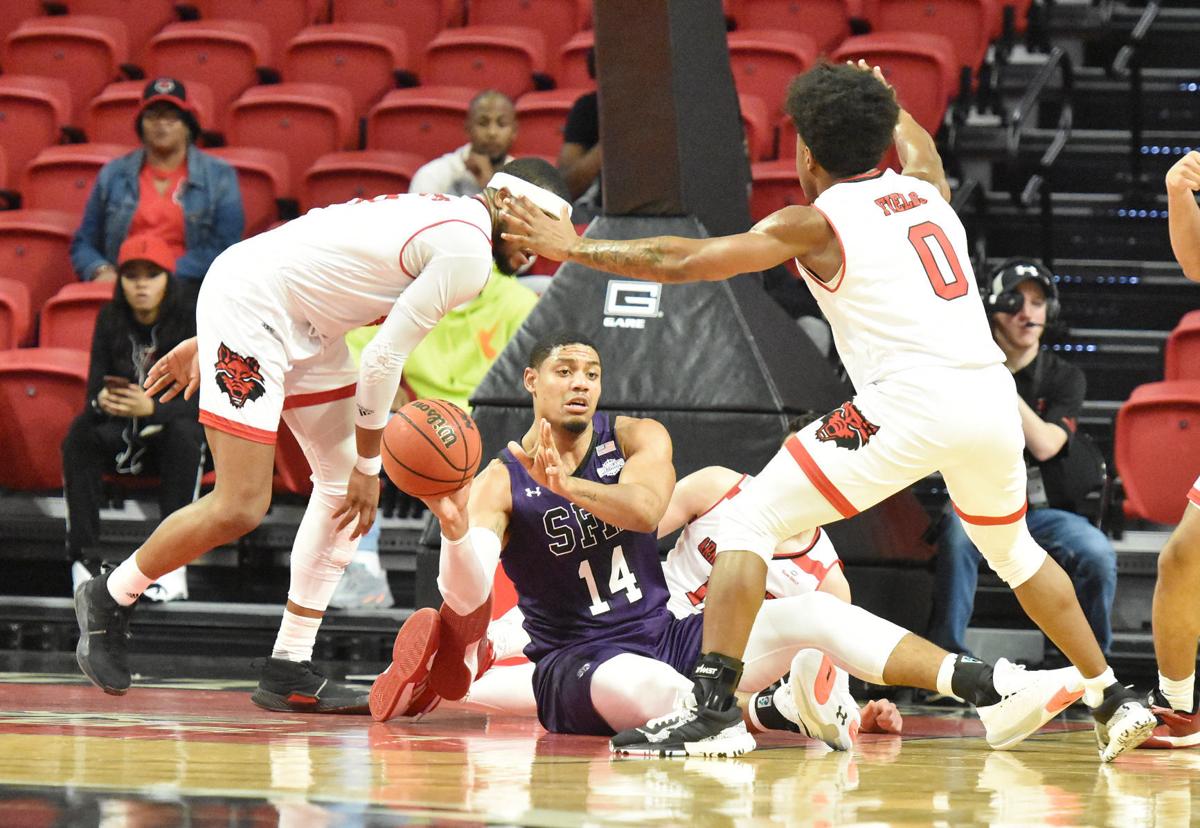 Stephen F. Austin junior forward Gavin Kensmil, left, battles with an Arkansas State player for a loose ball during Saturday afternoon’s game in First National Bank Arena in Jonesboro, Ark. SFA won the game, 76-57, to improve to 6-1 on the year.

After knocking off the No. 1-ranked Duke Blue Devils earlier this week, the Stephen F. Austin Lumberjacks were hoping to not suffer a letdown when they battled an Arkansas State team that was riding a four-game winning streak.

The ’Jacks accomplished their goal, pulling away from a three-point halftime lead by hitting 51.4% (18-of-35) from the field in the second half, while limiting ASU (5-2) to only 7-of-28 (25%) for a 76-57 win in the first meeting between the two programs in First National Bank Arena in Jonesboro, Ark.

Monday’s matchup will be broadcast on ESPN3, with KTBQ Radio (107.7-FM) handling the audio-only broadcast. Livestats will be available at SFAJacks.com.

In the victory over the Red Wolves, senior Kevon Harris and junior transfer Gavin Kensmil did the majority of the scoring for the Lumberjacks, scoring 22 and 20 points, respectively. Harris, who added five boards, connected on 7-of-16 from the field, while Kensmil was red-hot with 8-of-10 shooting from the field, while tallying a double-double with a game-high 15 boards, to go along with a pair of assists.

Three ASU players reached double-digit scoring, with Caleb Fields leading the Red Wolves with 18 points and seven rebounds, despite hitting only 4-of-13 from the field. Canberk Kus pitched in 16 points and eight rebounds, with Jerry Johnson, Jr. scoring 10.

The Lumberjacks, who scored 64 of their 85 points in the paint in the 85-83 OT win over Duke, continued to pound the ball inside against ASU. The ’Jacks scored 48 points in the paint, while limiting the Red Wolves to only 20. SFA also forced 20 turnovers, turning them into 18 points. SFA’s 17 turnovers were turned into only nine by ASU.

The Red Wolves led by as many as eight points in the first half, but the ’Jacks clawed back to grab a 30-27 lead at the half.

SFA led the rest of the way, stretching the advantage to as many as 20 points in the final half.