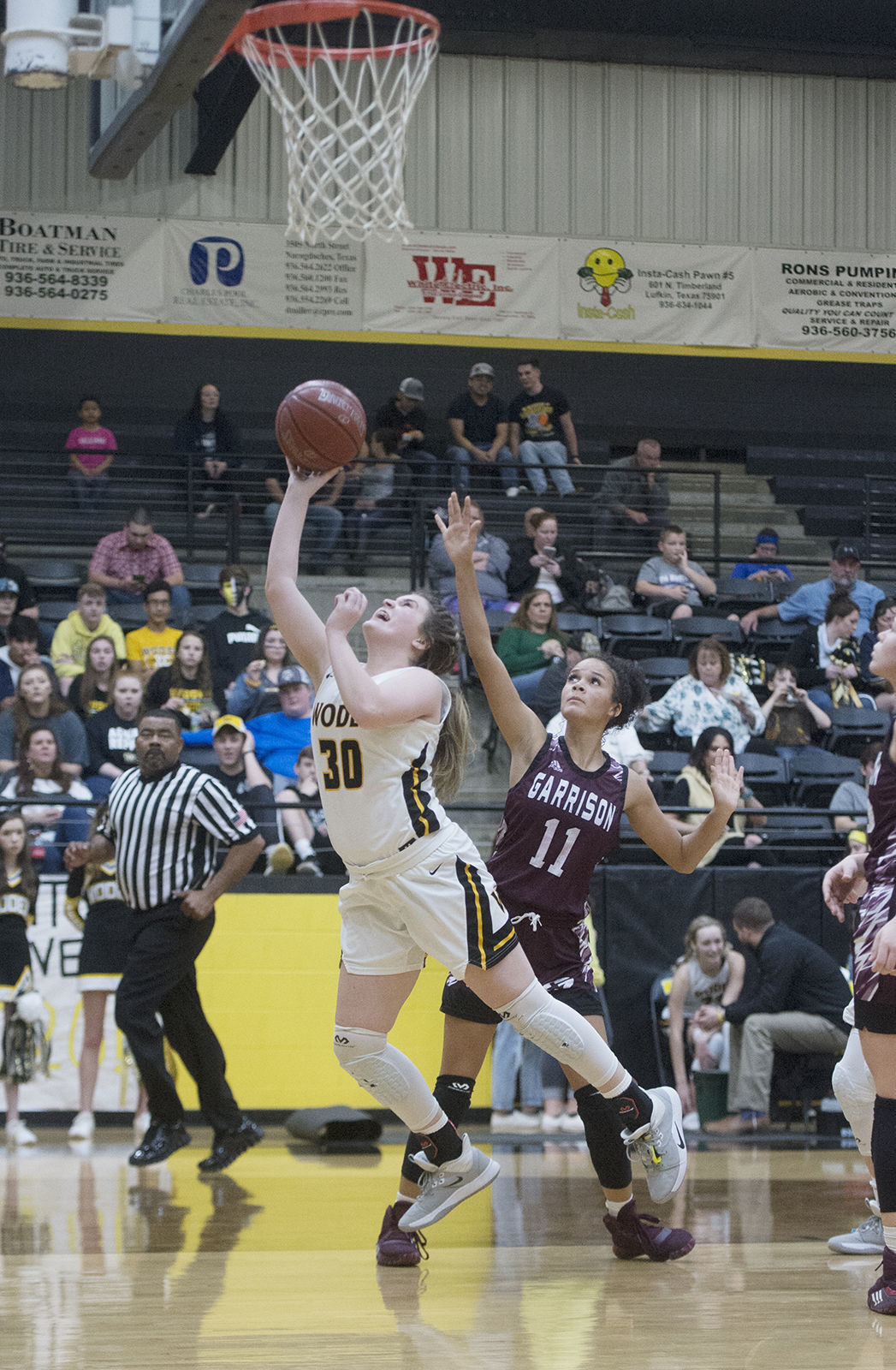 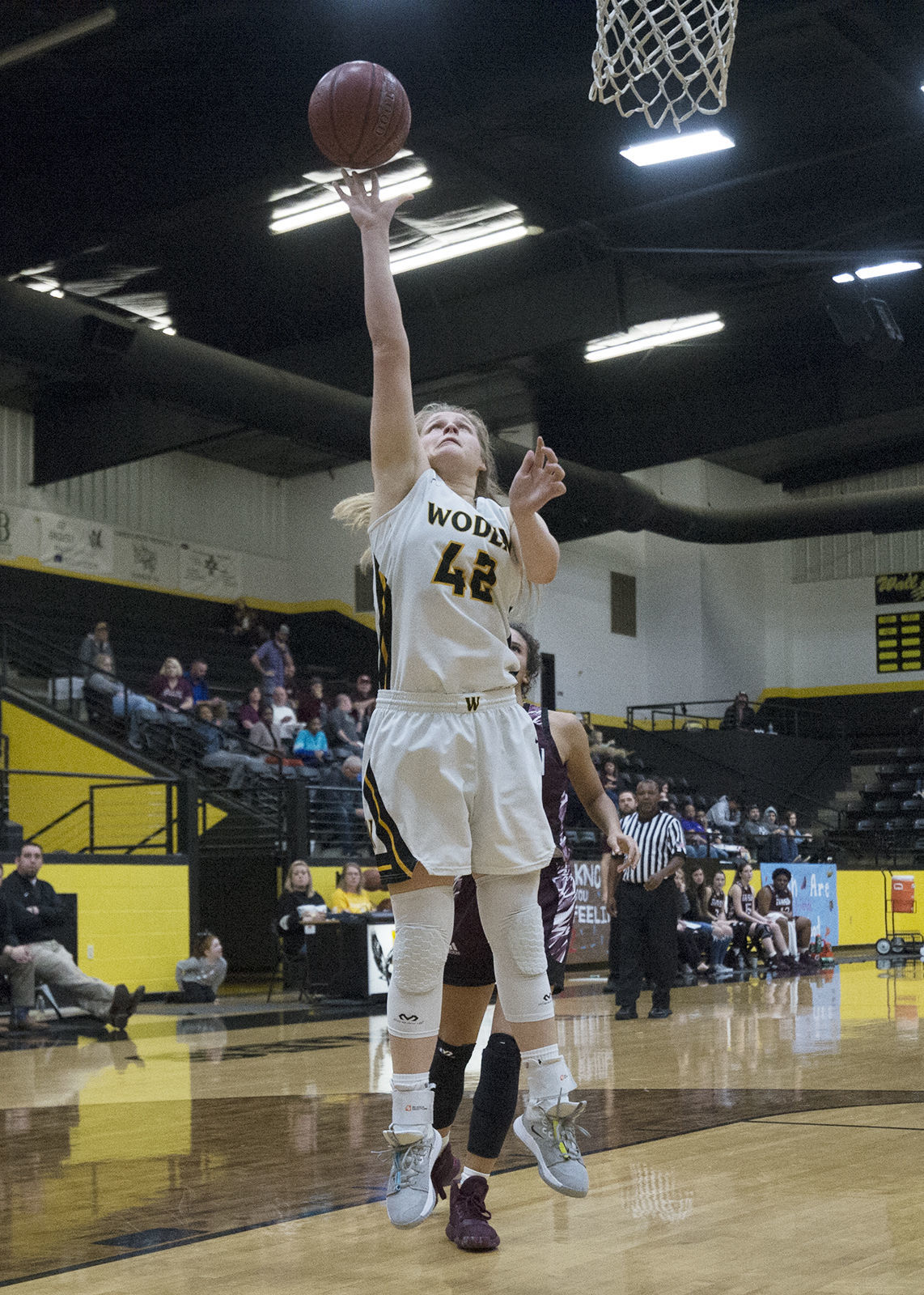 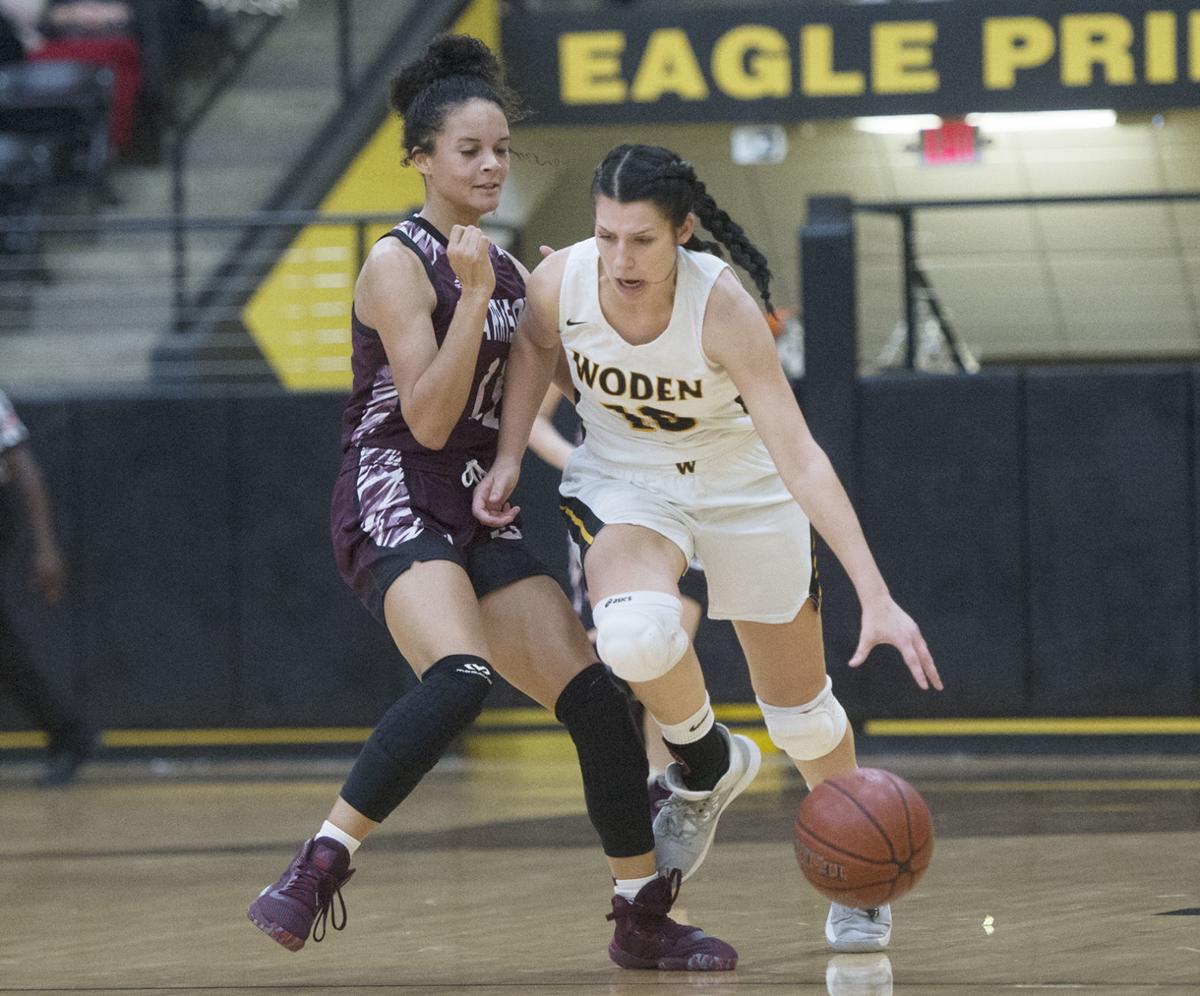 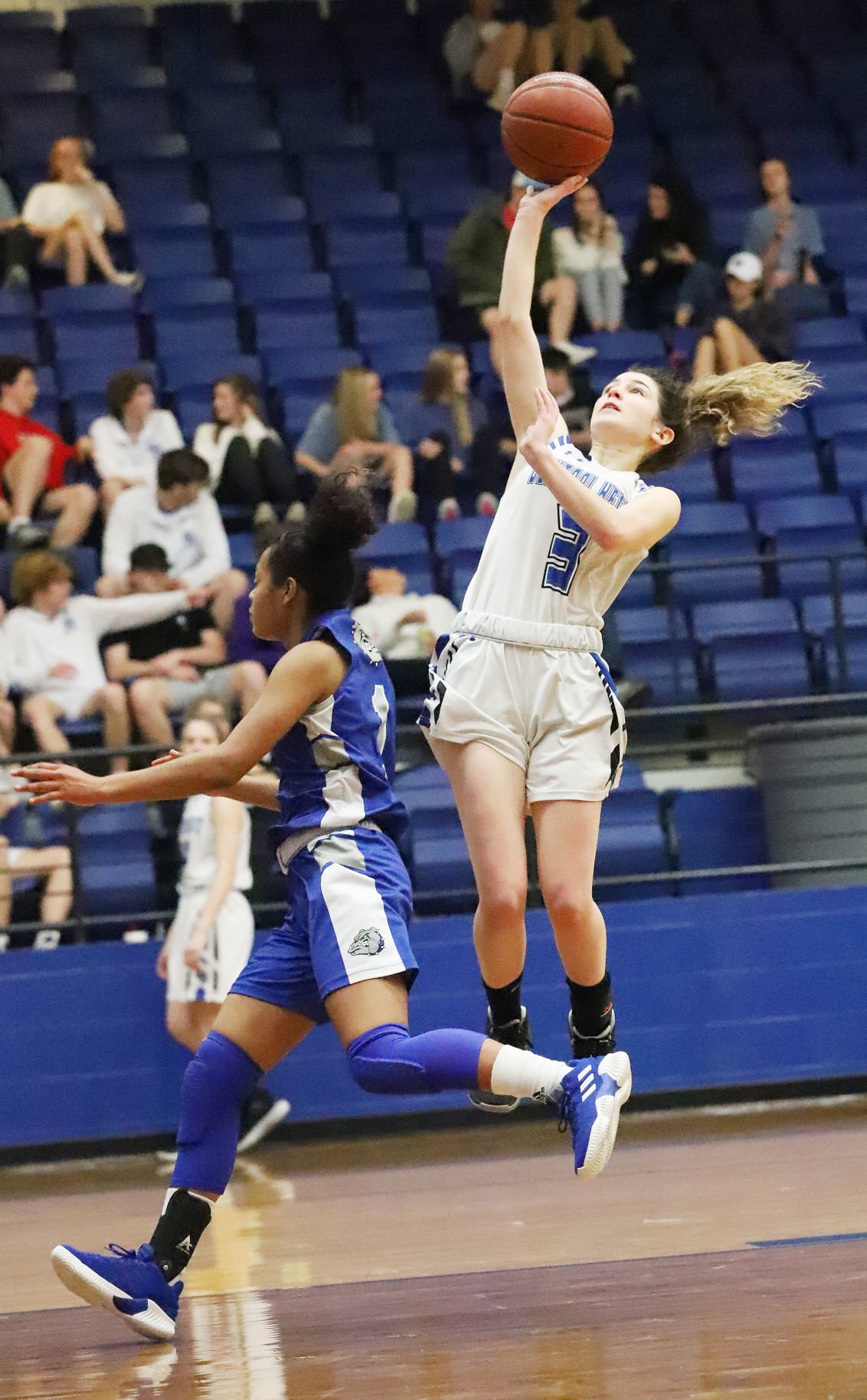 Central Heights junior guard Emily Durham (3) puts up a running shot in the lane during Friday night's game against Corrigan-Camden in Russell Gymnasium. 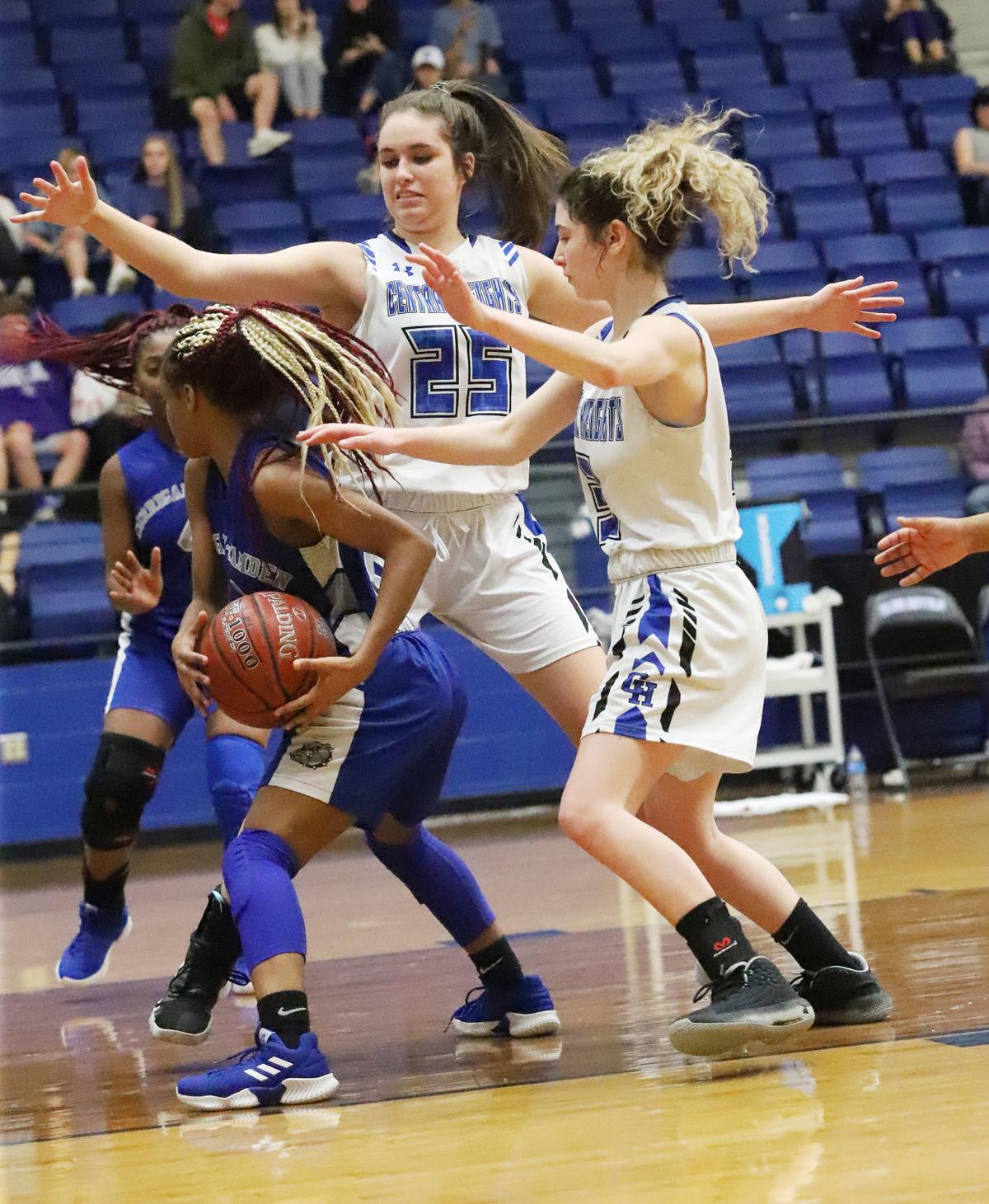 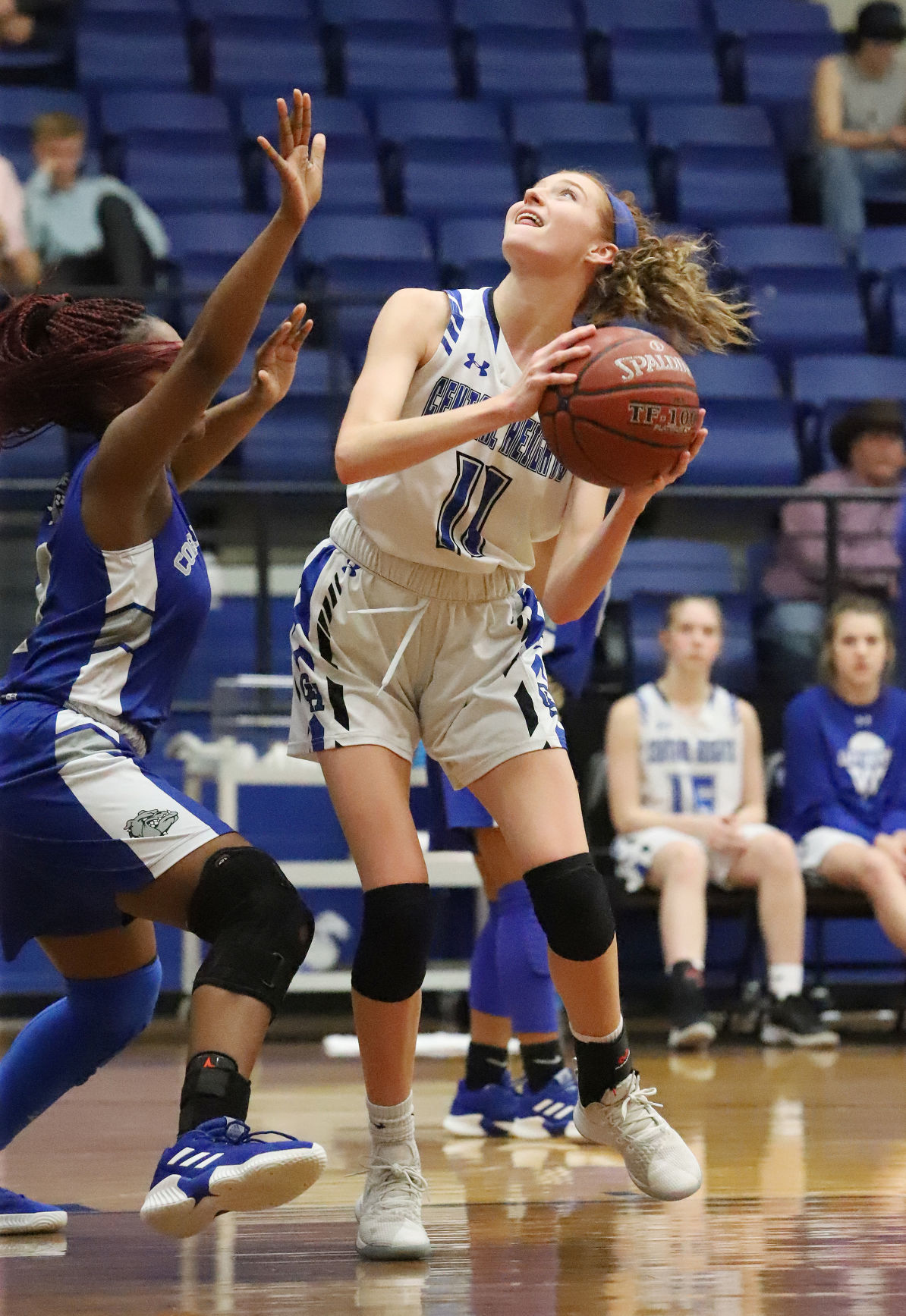 Central Heights Lady Blue Devil Brynley Thomas (11) turns to put up a shot in the lane during Friday night's game against Corrigan-Camden inside Russell Gymnasium.

Central Heights junior guard Emily Durham (3) puts up a running shot in the lane during Friday night's game against Corrigan-Camden in Russell Gymnasium.

Central Heights Lady Blue Devil Brynley Thomas (11) turns to put up a shot in the lane during Friday night's game against Corrigan-Camden inside Russell Gymnasium.

The Woden Lady Eagles continue to be a team that will be one of the Class 2A Region III favorites when the playoff roll around. Woden, the No. 3-ranked squad by the Texas Association of Basketball Coaches (TABC), kept its season mark perfect at 25-0 and stayed atop the District 22-2A standings with a 5-0 record Friday night as they breezed past Garrison, 56-17, in Ford King, Jr. Gymnasium.

The Central Heights Lady Blue Devils improved to 3-2 in District 21-3A play with a one-sided win over Corrigan-Camden, 63-48, while No. 24-ranked Douglass and Cushing both opened District 21-2A play with impressive wins. The Lady Indians rolled Mount Enterprise, 58-20, and the Galkats pounded Gary, 44-19.

Other area girls games included No. 22 Chireno topping Wells, 46-21, on Saturday, and Nacogdoches fell to Jacksonville, 39-26, on Friday.

Woden 56, Garrison 17 — The Woden Lady Eagles remain perfect on the season after a 56-17 win over the Garrison Lady Bulldogs Friday night.

The Eagles got off to a quick start, scoring 13 points in the first and 17 in the second quarter to go into halftime with a 30-11 lead.

The Lady Bulldogs couldn’t find their offensive footing in the second half, only mustering up six points. Woden, on the other hand, scored 19 in the third quarter and seven in the fourth.

Central Heights 63, Corrigan-Camden 48 — The Central Heights Lady Blue Devils used a 38-point second half to turn a nine-point halftime lead into a rout over the final 16 minutes, as the Devils improved to 3-2 in District 21-3A action with a convincing 63-48 win over Corrigan-Camden Friday in Russell Gymnasium.

Four different Lady Blue Devils scored in double figures, with Brynley Thomas leading the way with 14 points. She hit 5-of-8 from the line and scored eight points in the third to make her presence felt. Hannah Shugart added 13 points, including 11 of those coming in the final two periods.

Anna Huddleson also had a strong outing for CHHS, dropping in 12 points. She dropped in a pair of three-pointers in the final period to help the Lady Devils keep their double-digit lead. Emily Durham scored seven first-half points, finishing the game with 11.

Eillie Davis and Sealy Murdock each scored four points for the Lady Devils, with Spencer adding three and A.J. Johnson chipping in two.

The Lady Bulldogs dropped to 0-5 in district play with the setback.

Cushing 44, Gary 19 — Melody Duncan scored 10 of her game-high 16 points in the fourth quarter and Kirsten McCormack added 12 to lead the Galkats to a win in their first District 21-2A matchup, 44-19, in Denny-Sides Coliseum Friday.

Nacogdoches 63, Jacksonville 45 — Leading 24-13 at the half, the Nacogdoches Dragons exploded in the third period, outscoring Jacksonville 23-10, to cruise to a 63-45 win in a District 16-5A contest in Dragon Coliseum Friday night.