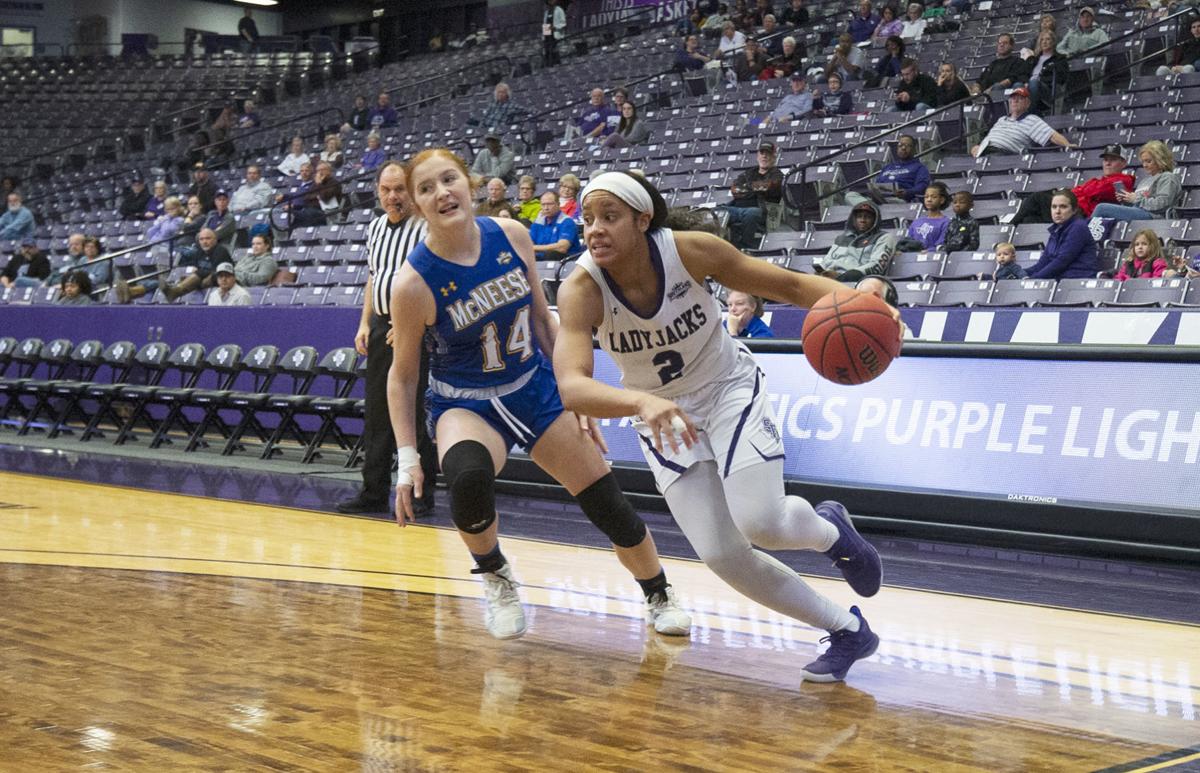 SFA’s Alyssa Mayfield pushes past a McNeese defender near the Cowgirls’ basket during Saturday’s game. 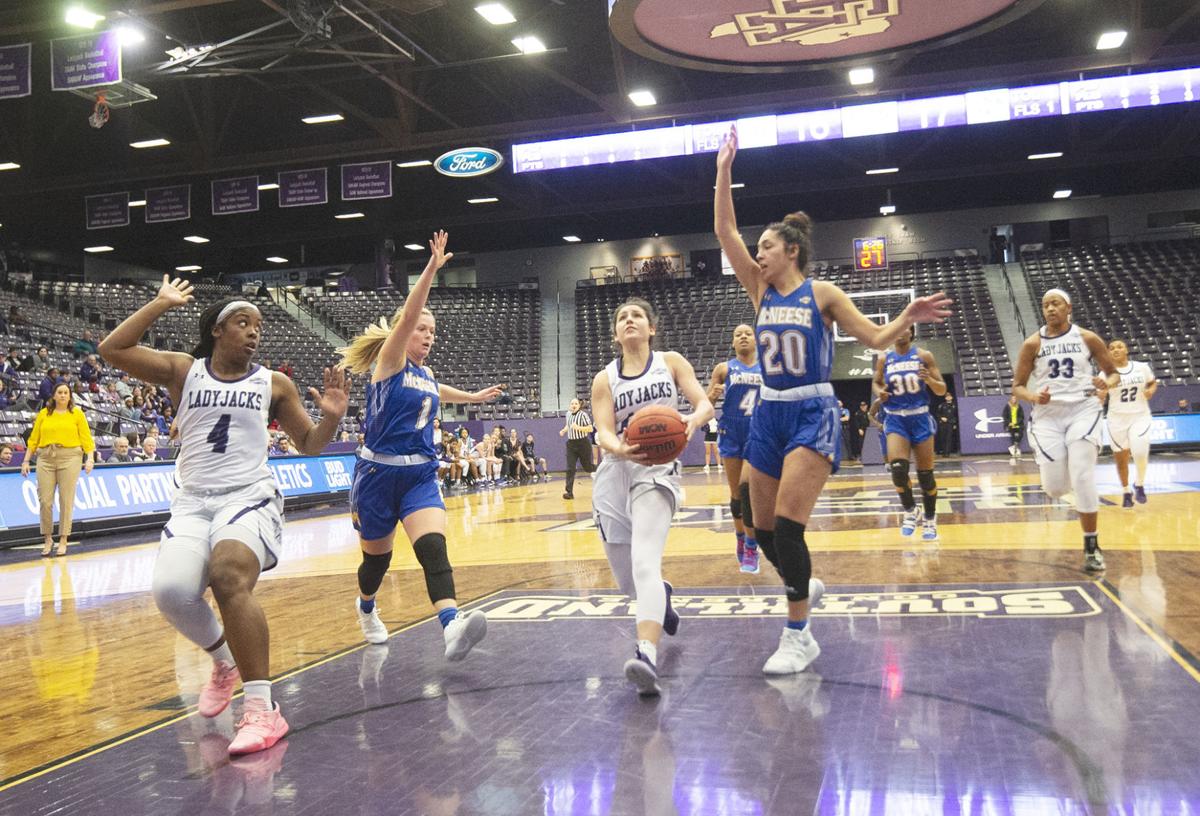 SFA’s Marissa Banfield moves in to take a shot as McNeese defenders try to block her during Saturday’s game. 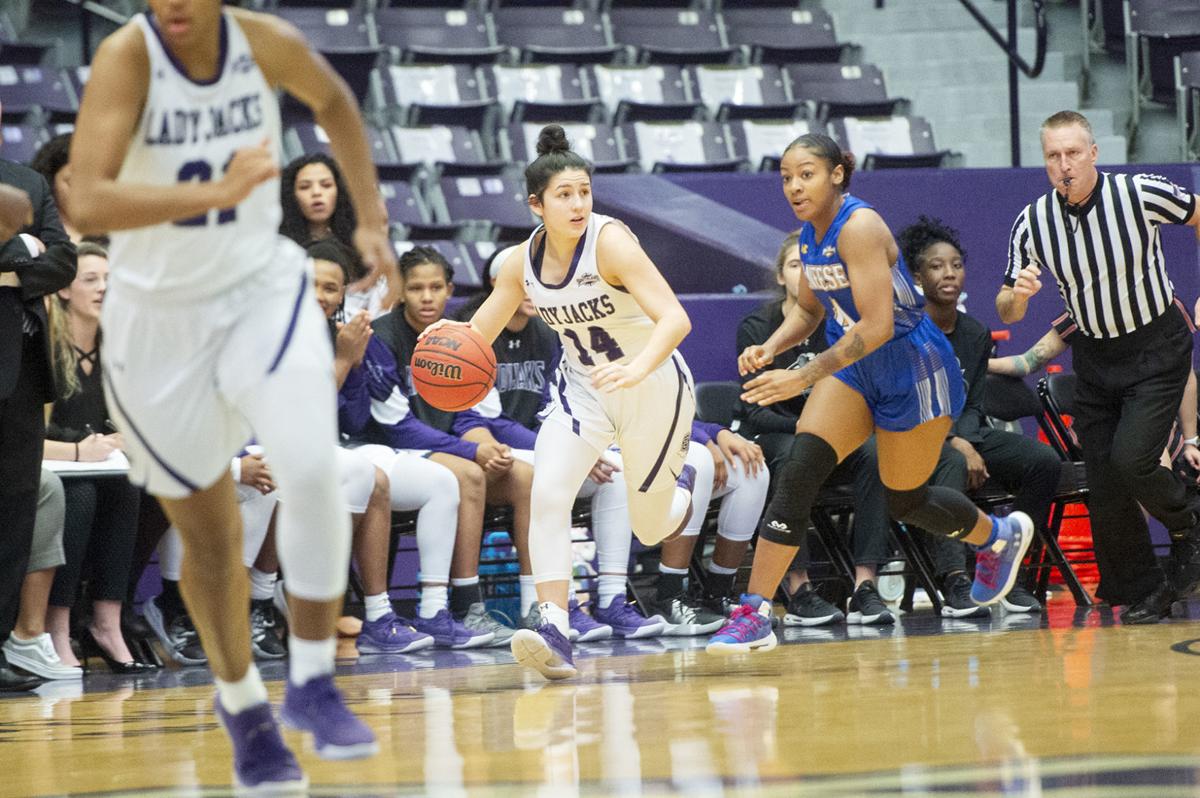 Ladyjacks’ Marissa Banfield dribbles up the court during Saturday’s game against McNeese. 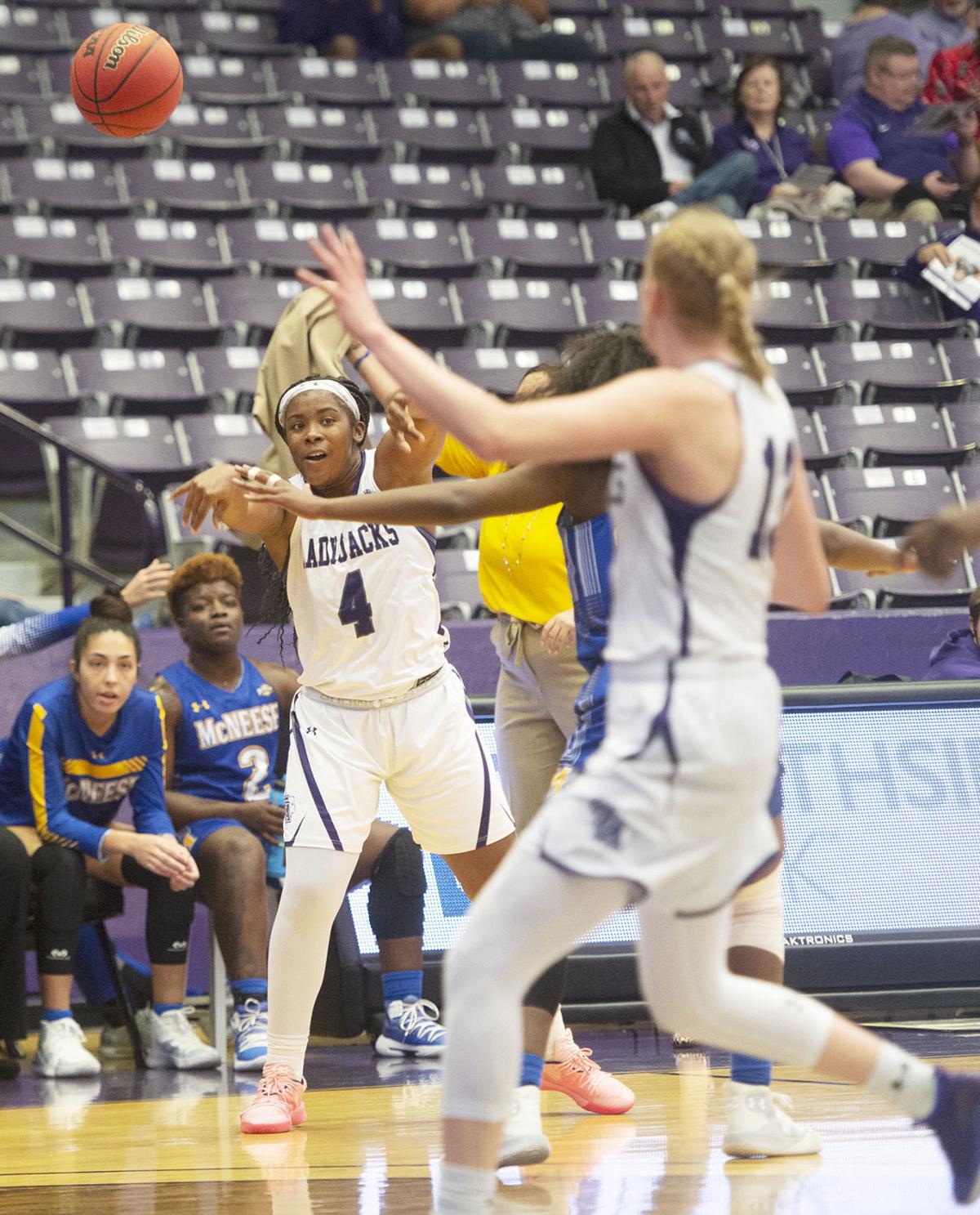 Ladyjacks’ Kennedy Harris passes up the court to Stephanie Visscher during Saturday’s game against McNeese.

SFA’s Alyssa Mayfield pushes past a McNeese defender near the Cowgirls’ basket during Saturday’s game.

SFA’s Marissa Banfield moves in to take a shot as McNeese defenders try to block her during Saturday’s game.

Ladyjacks’ Marissa Banfield dribbles up the court during Saturday’s game against McNeese.

Ladyjacks’ Kennedy Harris passes up the court to Stephanie Visscher during Saturday’s game against McNeese.

Despite a slow start, the Ladyjacks gained their sixth-straight win, 82-51, over McNeese Saturday afternoon at William R. Johnson Coliseum.

The Ladyjacks (8-2; 2-0) remain perfect in conference play. The matchup against the Ladyjacks was the first conference game for the Cowgirls (3-7; 0-1).

“We haven’t done this before, to play these league games prior to Christmas,” said SFA head coach Mark Kellogg. “We’re 2-0, 8-2, so we can sleep well for the next few nights and understand what’s coming ahead which is a long 18-game conference grind and one conference game. It’s a long 19-game season from here, but we’re happy with where we are currently.”

The Ladyjacks fell behind early, ending the first quarter behind 15-11. Despite shooting 4-for-9 (44.4%) from the field, 11 turnovers and early foul trouble for Aiyana Johnson proved to be the difference maker. Johnson scored five early points before picking up her second foul with three minutes remaining in the opening period, and was pulled for the remainder of the first half. McNeese went on to score 12 points off turnovers.

Offensive picked up for the Ladyjacks in the second stanza. MSU knocked down a mid-range jumper to open the scoring in the quarter, and was answered by a 7-0 run by SFA capped off by an Aaliyah Johnson three from the top of the arc to retake the lead. The two teams went back-and-forth until the halftime buzzer sounded, and SFA went into the locker room up 32-29.

“I didn’t particularly like our energy, and I didn’t think we were great early. I think they punched us first and it took us a while to punch back,” Kellogg said. “As we settled in outside of that first quarter, I thought we were pretty dominant the rest of the way.”

Coming out of halftime, the pressure on both sides was turned up. The Ladyjacks scored 50 points — 25 points in both the third and fourth quarter — in the second half, and held the Cowgirls to only 22 points.

Visscher led the Ladyjacks with 19 points, followed by Aiyana Johnson with 14. Nine of Johnson’s points came in the second half. Johnson led in rebounds with eight while Visscher led in assists with five. Coming off the bench, Alyssa Mayfield scored 12 and tallied a team-high six steals.

“(Mayfield) was really good and really active,” Kellogg said. “Alyssa led the charge, and we weren’t scoring great and she got going a bit. “I thought (Visscher) was great in the second half and she was fantastic.”

The majority of the scoring came in the paint, as the Ladyjacks outscored the Cowgirls 56-20 from up close. While the Cowgirls scored 12 points off turnovers in the first, they failed to add to that in the rest of the game.

Joining Mayfield in scoring off the bench was Zya Nugent with 10, five from Mikayla Hutchinson and four from Brianna Mitchell. SFA outscored McNeese in bench points by a margin of 34-16. All players who dressed out saw time on the court, and everyone scored except for Noelle Yancey.

“(Depth) is going to be very big (going forward),” Kellogg said. “We have 11 of them out there that are capable of helping out.”

Before the start of the game, SFA announced Coach Kellogg’s 100th win and 350th career win against Houston Baptist on Wednesday.

The Ladyjacks will be back in action when they square off against Our Lady of the Lake at 2 p.m. Sunday, Dec. 29 at William R. Johnson Coliseum.