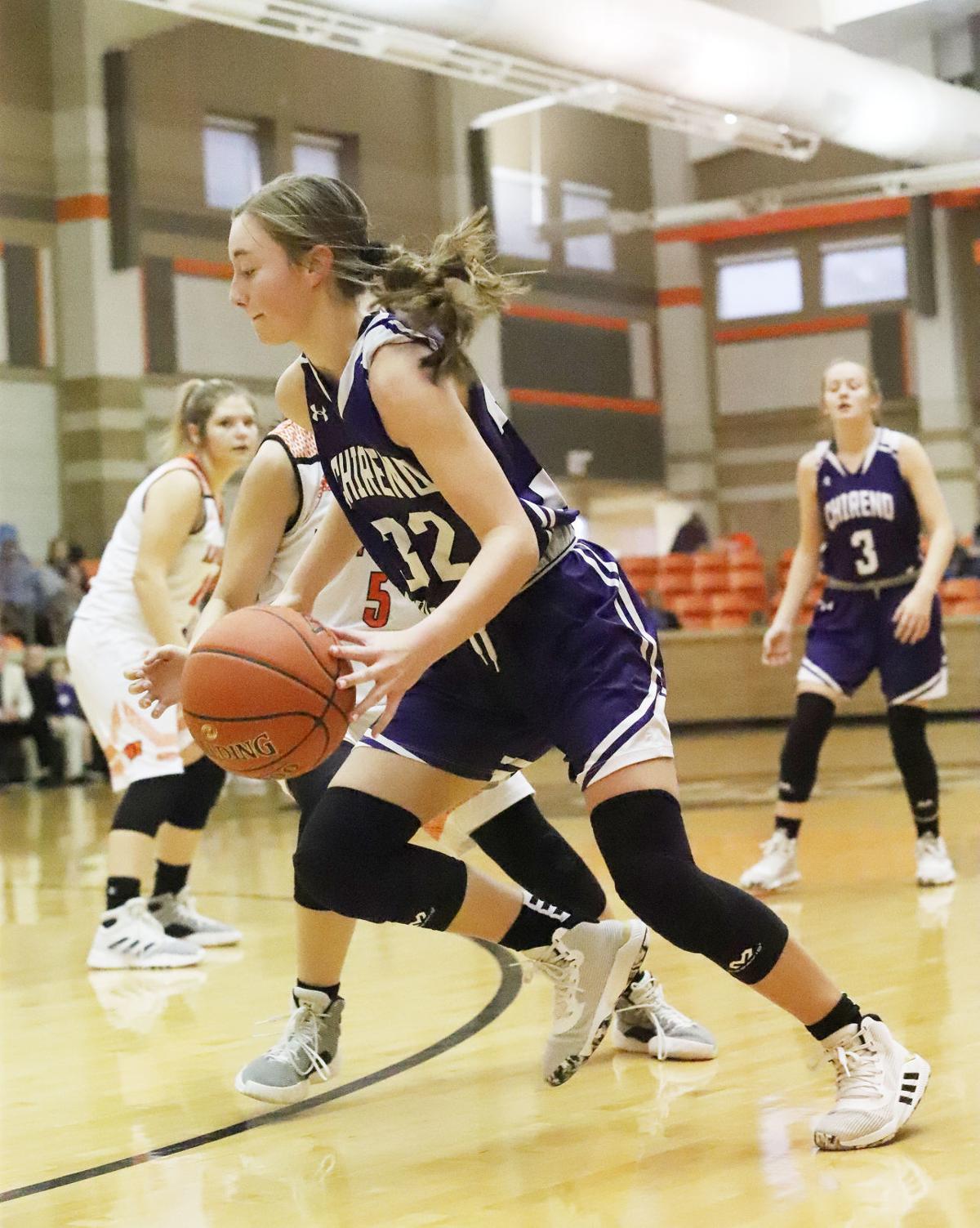 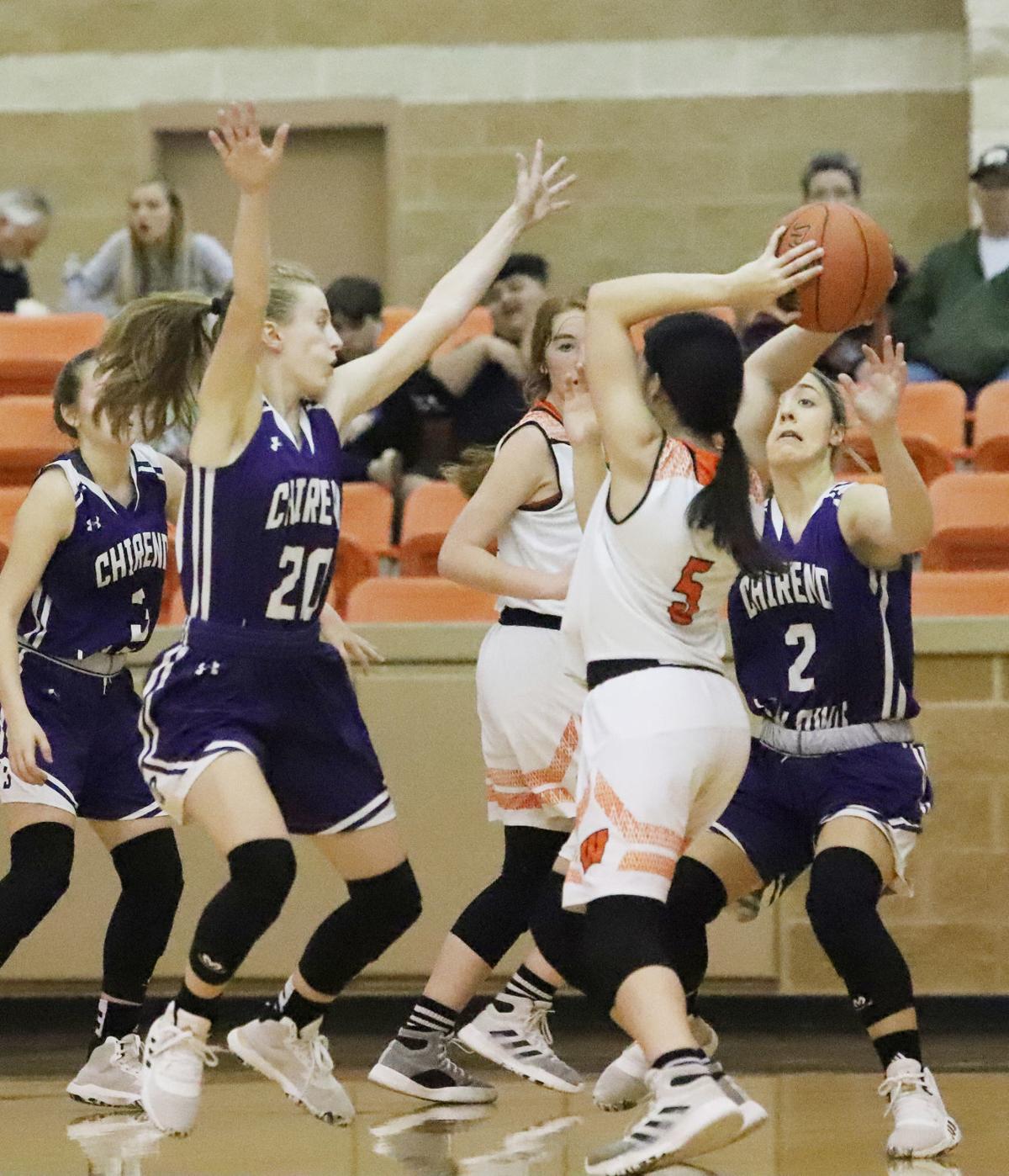 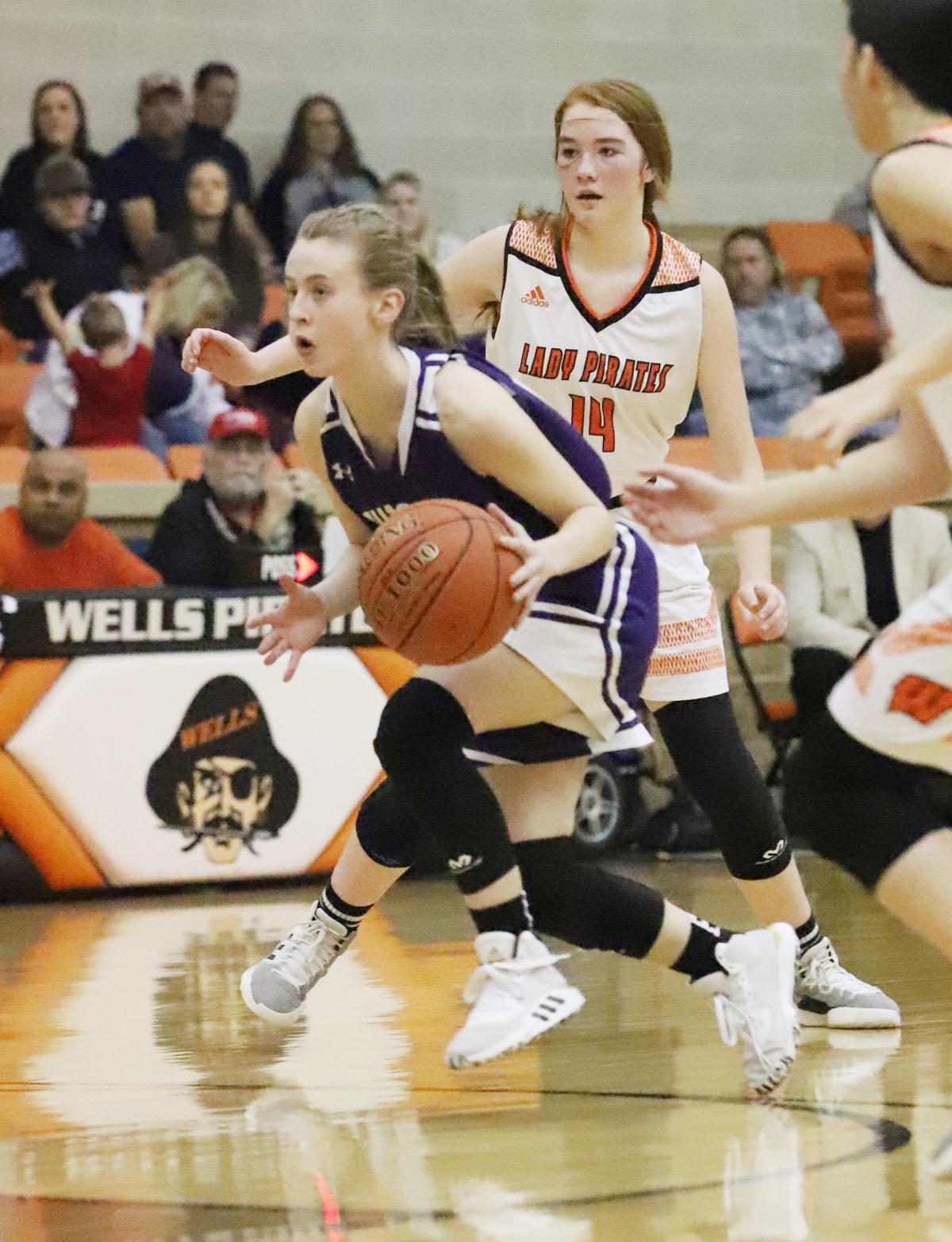 Chireno Lady Owl sophomore Alaina Goodwin splits defenders as she drives to the basket during Saturday afternoon's District 28-1A game against Wells in Pirate Gymnasium. 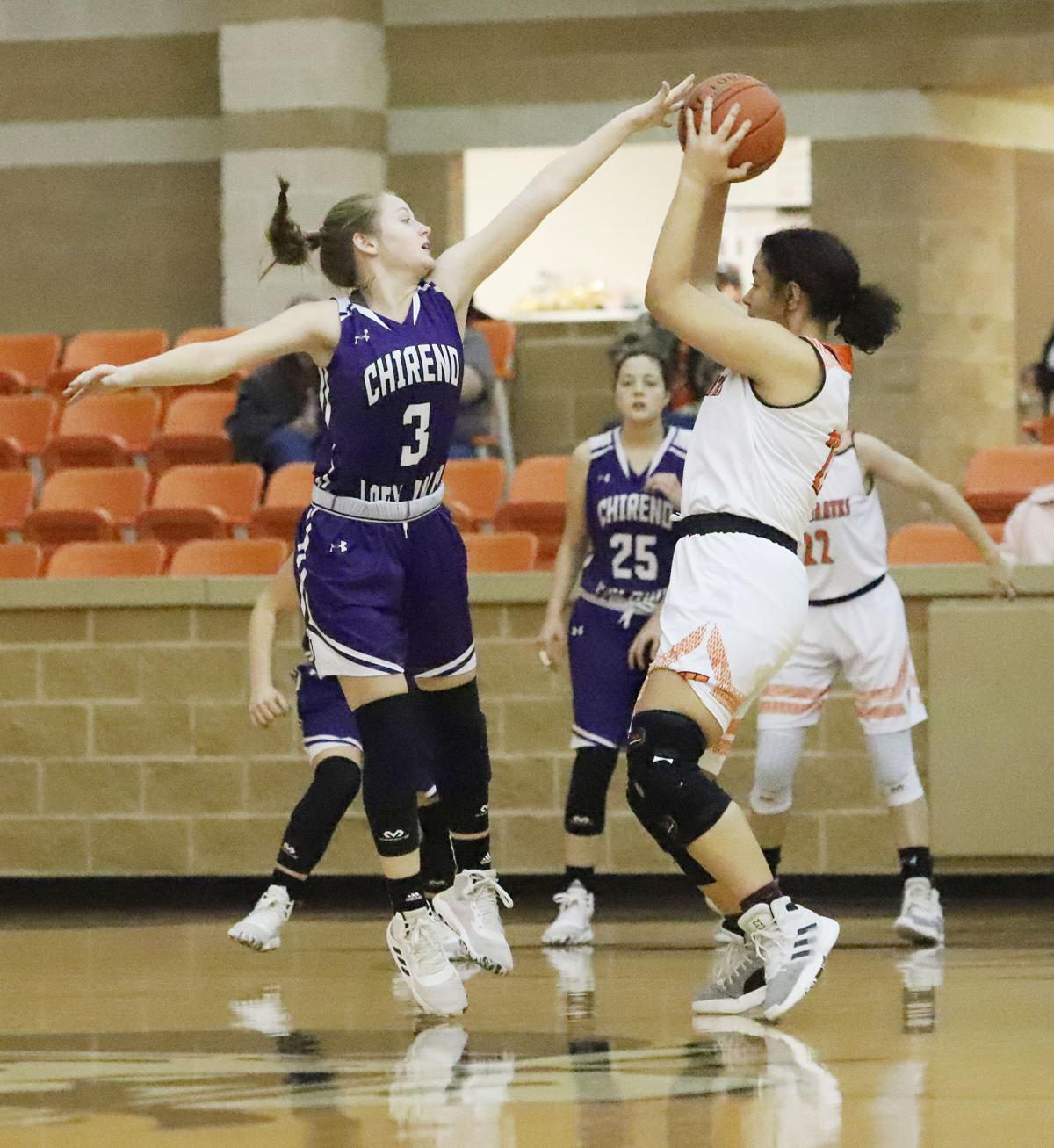 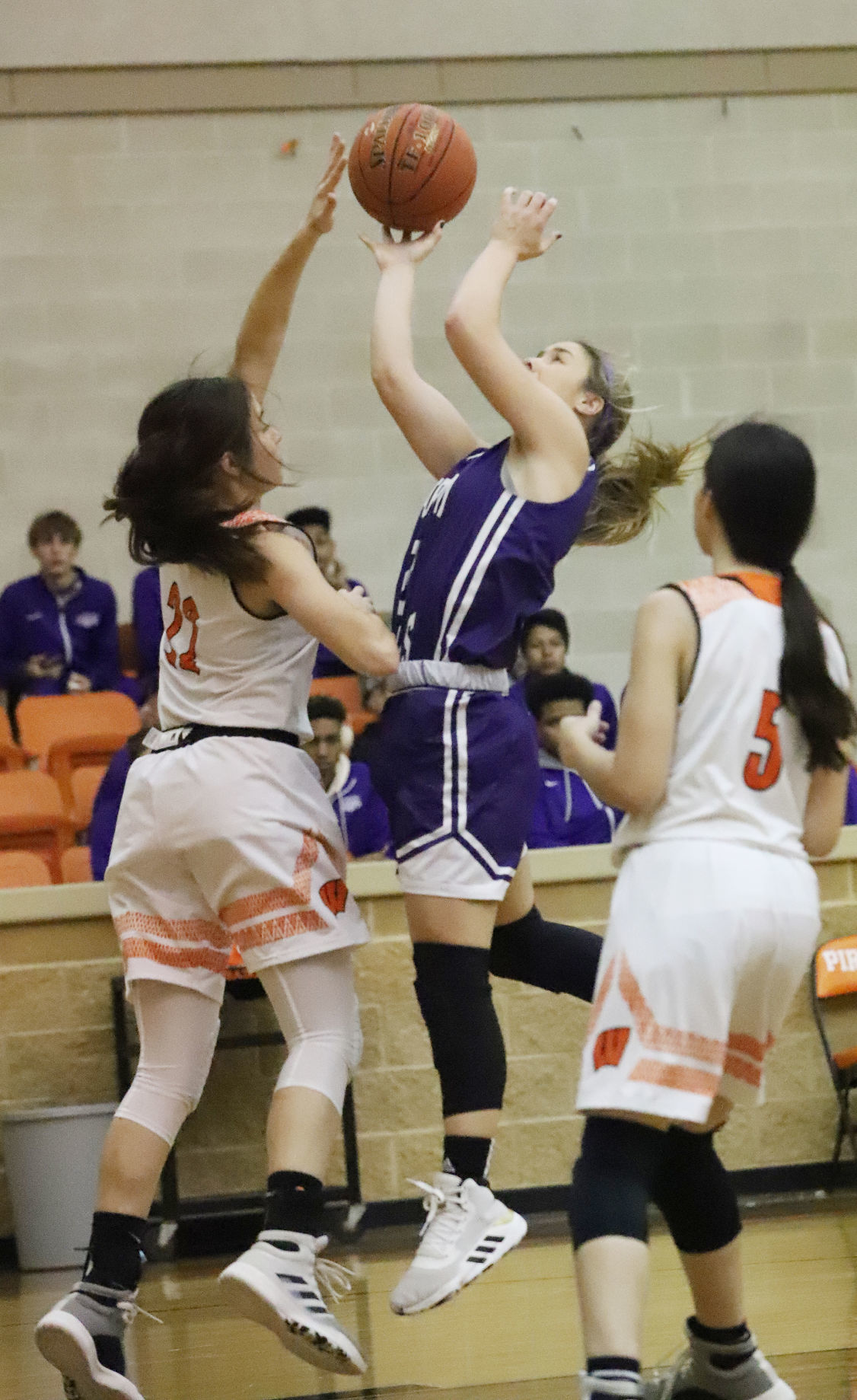 Chireno Lady Owl senior Jaleigh Johnson puts up a shot in the paint during first-half action against Wells Saturday in Pirate Gymnasium.

Chireno Lady Owl sophomore Alaina Goodwin splits defenders as she drives to the basket during Saturday afternoon's District 28-1A game against Wells in Pirate Gymnasium.

Chireno Lady Owl senior Jaleigh Johnson puts up a shot in the paint during first-half action against Wells Saturday in Pirate Gymnasium.

WELLS — In a district in which two schools — Oakwood and Centerville — have canceled their varsity girls basketball programs and, because of an uneven number of teams, squads have bye dates, the No. 23-ranked Chireno Lady Owls need to make the most every time they step on the floor.

They did just that Saturday afternoon, forcing 21 first-half turnovers (29 total) and then coasting in the final two periods for a 46-21 District 28-1A victory over Wells (15-10, 3-3 dist.) here in Pirate Gymnasium.

Despite being off for eight days, the Lady Owls used tough defense to get into rhythm and rode the hot shooting hand of sophomore Saylor Holloway. Holloway poured in four three-pointers to lead all scorers with 21 points, while adding eight rebounds and four steals.

“We wanted to come out with a lot of pressure and really get after them to set the tone right away, and we did,” said Lady Owl head coach Giff Durham. “We got a lot of steals and didn’t turn (the ball) over.

“Nos. 14 and 5 (for Wells) were their two main scorers and I thought (sophomore Jessie) Durrett and (sophomore Alaina) Goodwin did a good job defensively, as well as (freshman Olivia) Renya when she came into the game.

“The key for us was our defense and everybody worked really hard today. These girls get out there and give it everything they’ve got on defense.”

Chireno improved to 16-8 on the year with the win, grabbing a stronghold on to second place in the 28-1A race with a 5-1 mark. They will visit No 18-ranked and league-leading LaPoynor on Tuesday at 6 p.m. in the big league showdown.

Despite Holloway leading the way in the scoring column, it was a complete team effort for Chireno, as they aim at returning to the Class 1A Region IV Tournament finals again this season.

Although the defensive tempo was there in the opening period, forcing 12 Lady Pirate turnovers, the scoring started slow for Chireno. But after leading 2-1, the Lady Owls went on a 10-0 run over a span of 2:32 to grab a 12-1 lead. Holloway scored seven points in the run.

Leading 12-4 after the opening period, Holloway burned the Wells defense with three straight treys in the first 1:55 of the quarter to widen the Chireno scoring gap to 21-4. CHS led 28-10 at the half, then used three-pointers by Vargas, Johnson and Bennett to boost the lead to 44-18 heading into the final stanza. They coasted from there.