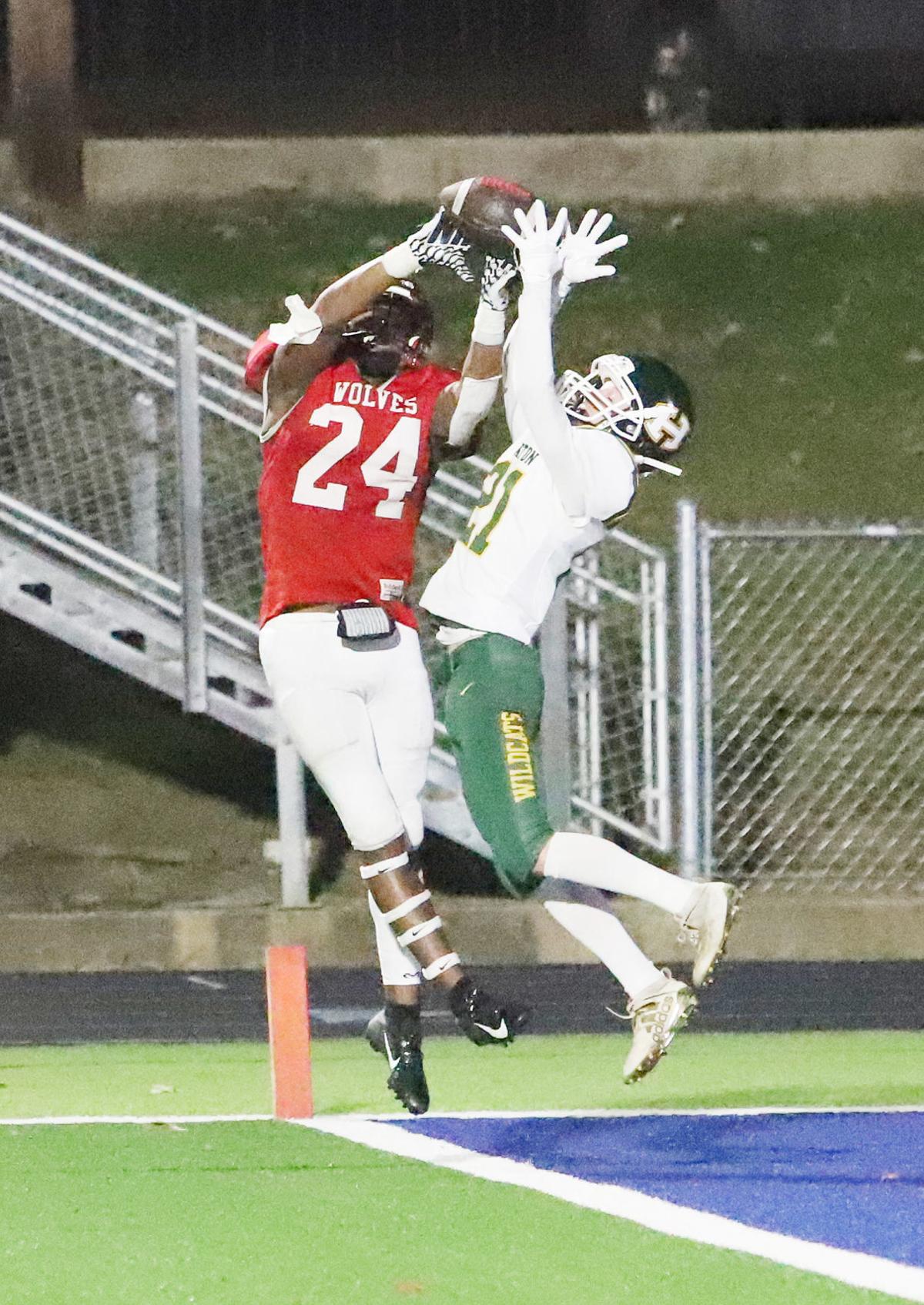 San Augustine defensive back JaVarius Miller (24) leaps high to battle with Harleton wide receiver Blake Weaver (21) for a pass during action in the second half of Friday's Class 2A DI Region III Semifinal at Lions Stadium. 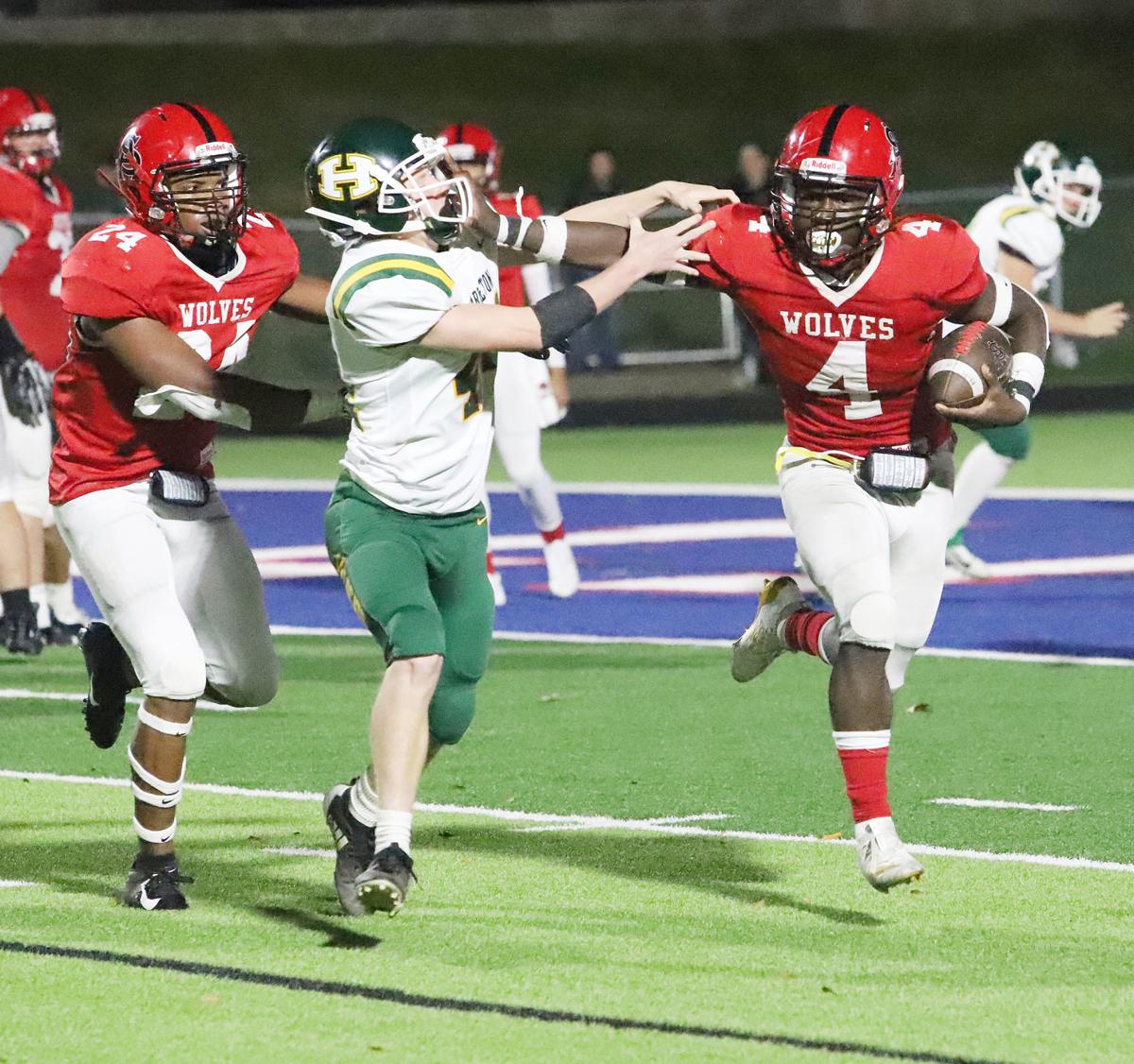 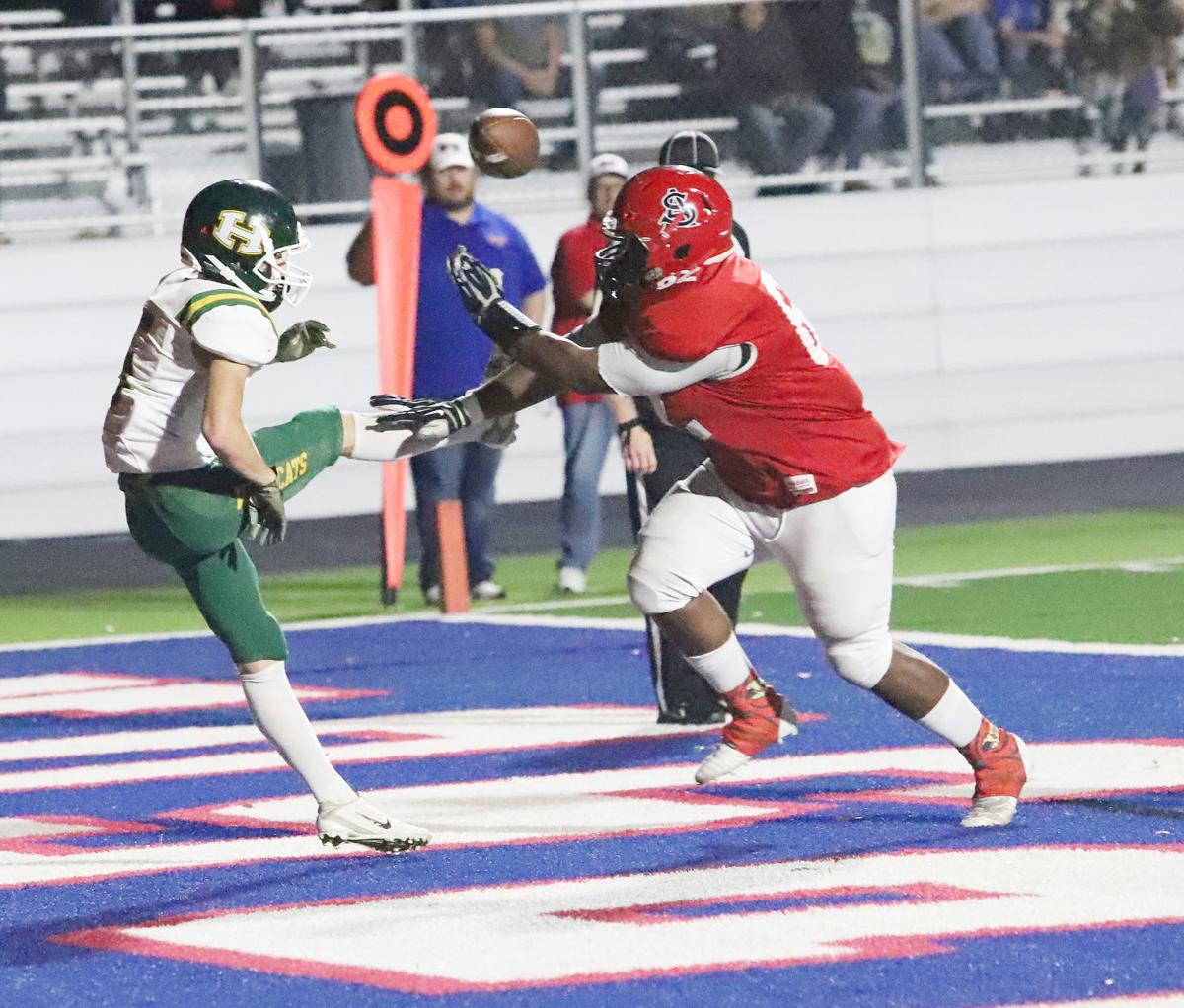 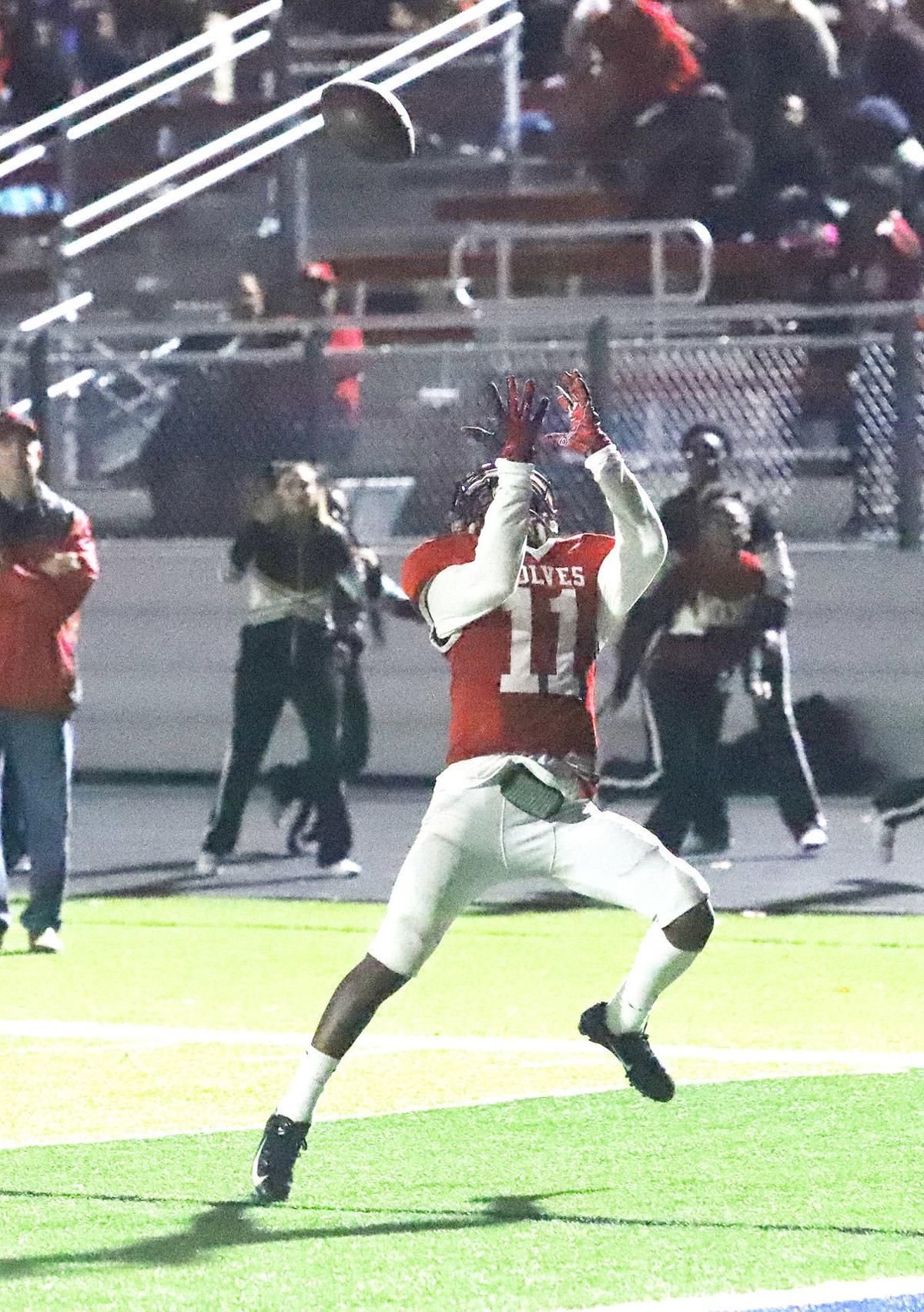 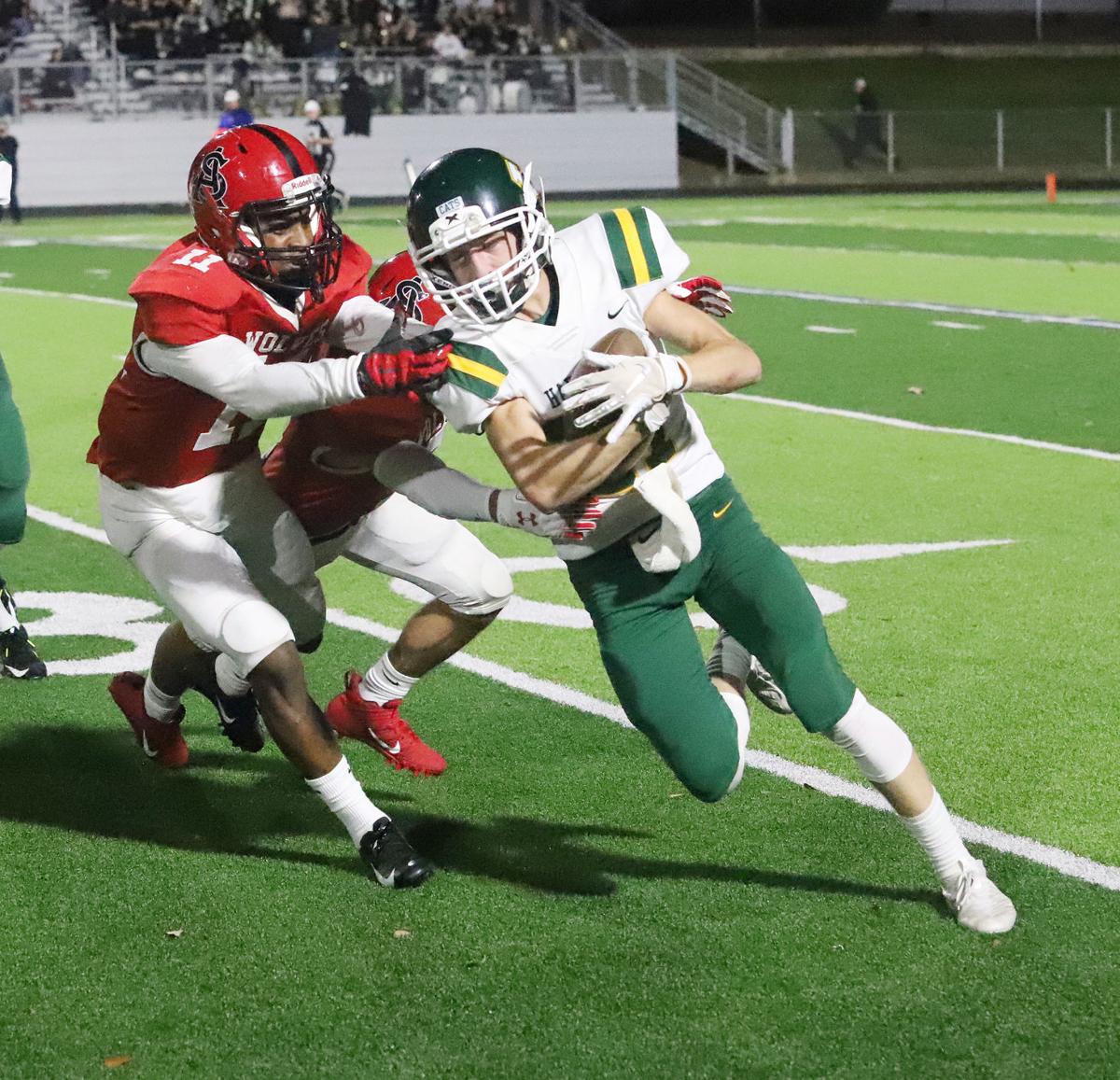 San Augustine defensive back JaVarius Miller (24) leaps high to battle with Harleton wide receiver Blake Weaver (21) for a pass during action in the second half of Friday's Class 2A DI Region III Semifinal at Lions Stadium.

HENDERSON — Bringing in a team that was averaging 62.8 points a game and scoring nearly 46 points a contest more than its opponents this season, San Augustine head coach Marty Murr had a change-of-pace gameplan when his No. 4-ranked San Augustine Wolves battled Harleton in the Class 2A DI Region III Semifinals Friday night: Slow the game down.

But Murr and the Wolves worked their gameplan to perfection here at Lions Stadium, using their tough defense to stop the Wildcats (10-3) on a pair of key fourth-down plays and stopping HHS from scoring near the goalline as the first half expired, and again early in the third quarter, resulting in a 47-21 victory.

San Augustine (12-0), a state semifinalist a year ago, now moves within one win of returning to that round, as the Wolves will advance to the 2A DI Region III Championship this week, taking on Groveton (11-2) on Friday at 7 p.m. at Stephen F. Austin’s Homer Bryce Stadium.

The Wolves had their hands full with Harleton for more than two quarters Friday night, despite taking a 21-0 lead into the locker room at the half. San Augustine stopped Harleton on its first drive after the Wildcats moved 46 yards in 14 plays. But the drive stalled when Tijay Thomas-Davis and Cory Clifton tackled HHS runner Taber Childs (9-32 yards) on a fourth-and-two play for a two-yard loss.

After taking over on downs, San Augustine drove 63 yards in eight plays as quarterback Jayden Hicks scored from the one with 2:03 left in the opening period. J.Saul Landeverde added the PAT.

Early in the second quarter, Thomas-Davis picked off a Grayson Handlin pass and returned it 34 yards to set up the Wolves’ second score. Two plays after the pick, Hicks, who completed 8-of-13 passes for 143 yards and three scores, while running for 21 yards and two TDs, connected with Thomas-Davis (4-53 yards, 2 TDs) on a 21-yard touchdown over the middle. The point after boosted the SAHS lead to 14-0 with 11:52 remaining before the half.

Harleton’s next drive stalled on downs at midfield, giving the Wolves excellent field position. San Augustine drove 50 yards in eight plays as Hicks scored from one yard out with 6:11 left before intermission.

The Wildcats attempted to gain some momentum before the break, driving 71 yards in 15 plays and taking 6:11 to do so. But Harleton’s drive stopped two yards short of the goalline as time ran out on a second-and-goal play from the seven.

“I thought the two fourth-down stops were huge tonight,” Murr said after the game. “We knew they were going to slow the game down and we knew if we could get off the field on third down we’d get them in a bind because they’re really not a come-from-behind team.”

Despite leading 21-0 at the break, San Augustine only held a 174-142 lead in total yards. Harleton tried to get the momentum back to start the third by methodically driving down the field. But a 59-yard drive in 14 plays that took 5:45 didn’t result in points as the Wildcats came up empty when it was halted two yards short of a first at the San Augustine four.

“(Keeping them from scoring just before the half) I thought was big for us,” Murr added. “And I thought the first possession of the second half was big — it always is — and it turned out well and gave us a lot of momentum.”

On San Augustine’s next possession, Dez Watts launched a 71-yard punt, pinning the ‘Cats at their own one-yard line. After failing to pick up a first down, Cameron Postins’ punt was blocked, and it was Watts who did the honors again. The ball went out of the endzone for a safety and a 23-0 lead.

The Wolves then scored two plays after the free kick when Hicks connected with a wide open Thomas-Davis for a 24-yard score for a 29-0 advantage with 1:36 on the clock in the third.

After booming a punt and blocking one, Watts later got a chance to run the ball. He created a 35-0 San Augustine lead with 8:05 remaining when he ran in the backfield, and the 6-0, 255-pound back scored from the one.

Harleton did manage three touchdowns in the final 5:40, but Hicks hit DelMarquis Barnes for a 50-yard scoring play and SAHS added another TD late.

The Wolves only outgained the Wildcats 424-391, but it was stopped drives that made the big difference in momentum. Barnes rushed for 127 yards on 14 carries for the Wolves, while Justin Davidson led Harleton with 104 yards on 22 runs.

“Our goal coming in was getting them off the field on third down and we were able to accomplish that,” Murry concluded. “We have 14 seniors on this team and they’ve been here [deep in the playoffs] before and that was a key for us.”

Now its on to the next round.