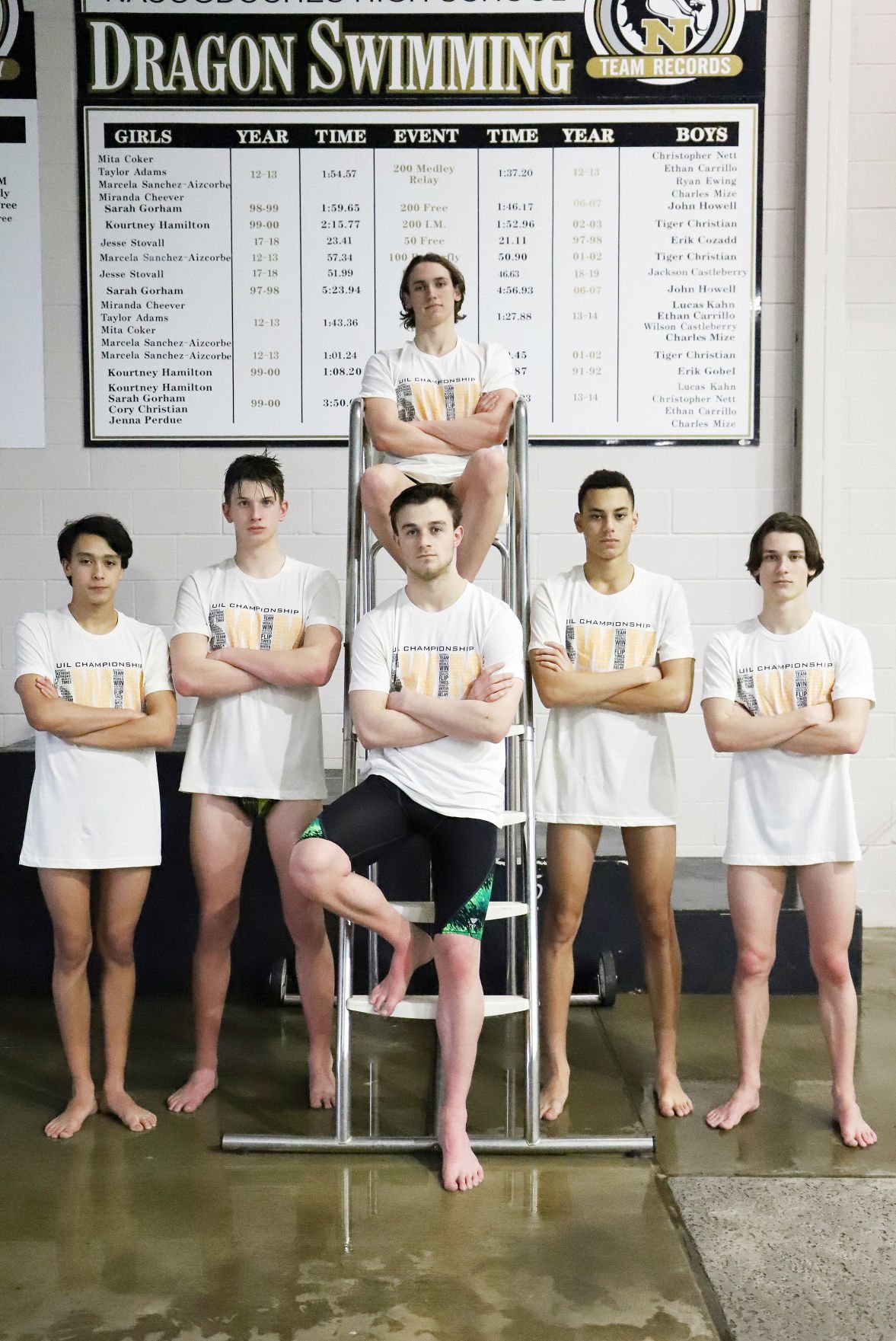 Six members of the Nacogdoches Dragons swim team will be in Austin today and Saturday for the Class 5A State Swimming and Diving Championships. Members of the team are (front, from left) Allister Jackson, Cooper Hinson, Daniel Chandler, Zach Fickes, Phillip Franke, along with (top) Jackson Castleberry. 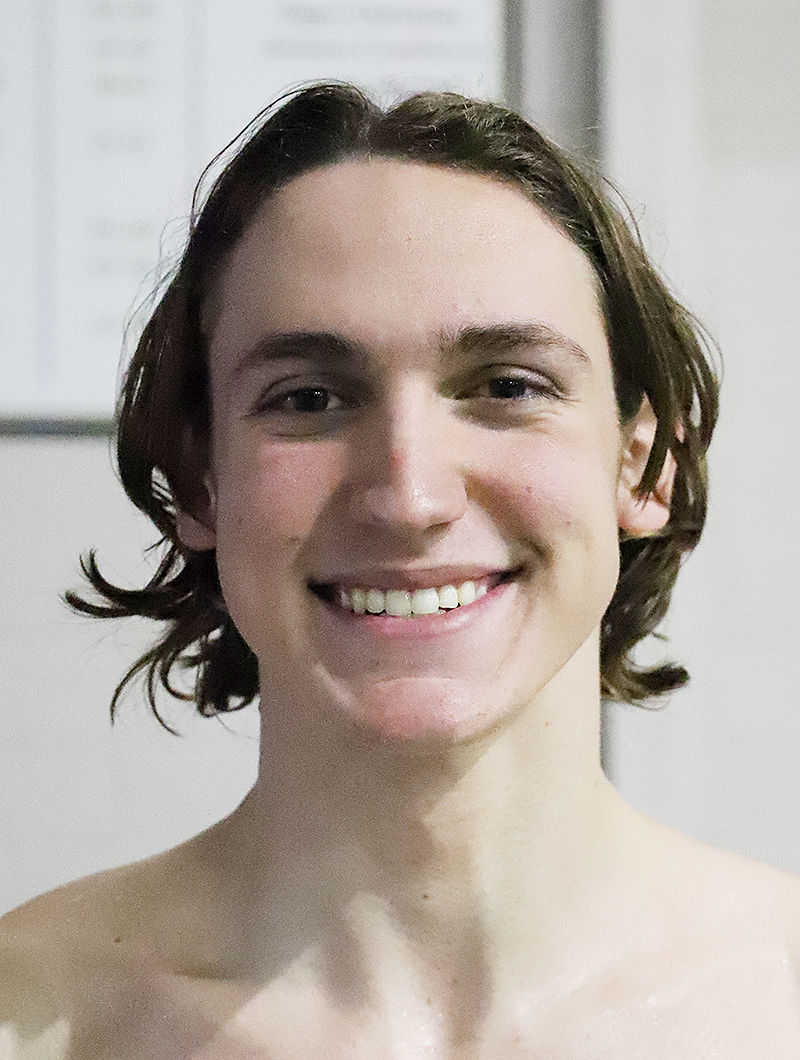 Six members of the Nacogdoches Dragons swim team will be in Austin today and Saturday for the Class 5A State Swimming and Diving Championships. Members of the team are (front, from left) Allister Jackson, Cooper Hinson, Daniel Chandler, Zach Fickes, Phillip Franke, along with (top) Jackson Castleberry.

For six members of the Nacogdoches Dragon swim team, there are a number of key of words that head coach Carrie Scroggins uses when she describes what it means to her as they compete against Texas’ best today and Saturday in the University Interscholastic League Class 5A Swimming and Diving Championships.

When seniors Jackson Castleberry, Cooper Hinson and Phillip Franke, along with junior Zach Fickes, sophomore Daniel Chandler and freshman Allister Jackson prepare to compete against the state’s best at the Lee and Joe Jamail Texas Swimming Center in Austin, it will be a chance to make a special mark, not only for themselves, but for their coach, their team, their school and their community.

Castleberry will be making his third straight trip to Austin when he competes in two individual events, as well as two relays. He earned gold medals in the 100-yard Freestyle and 100-yard Backstroke at the Region V Meet two weeks ago and has a legitimate chance to medal in both of the events this weekend.

But the senior knows there is no tomorrow.

“I think about the fact that since from first to where I’m seeded there is less than a second, or about a second, I know it’s anyone’s game,” Castleberry said about his mindset. “So if I have a favorable lane I can come home with a medal.”

Castleberry said he wants a lane with a fast swimmer next to him to give him incentive.

Hinson will be making his second straight trip to State, competing in the 200-yard Medley Relay and the 400-yard Freestyle Relay and is confident his foursomes, although their times were call-ups [meaning they were not automatic qualifiers, but timed qualifiers for the top 24 spots at the State meet] they were within one second of the top qualifying times and anything is possible.

“Having been (to State) before make it a little less nerve-racking because I was able to experience that before,” Hinson explained about the benefits of returning a second time. “Now we know what’s there and we can just get after it and give it our best shot.”

The Dragon 200-yard Medley Relay is made up of Castleberry, Franke, Fickes and Hinson, qualifying with a third-place time in Region V of 1:37.76. It was the second-best call-up time.

The Nacogdoches 400-yard Medley foursome of Jackson, Fickes, Hinson and Castleberry posted a fourth-place finish in the region with a time of 3:17.71, with the top call-up time being 3:14.37. Franke is going to replace Jackson in the preliminary with the hopes he may give the Dragons a boost headed into the finals on Saturday.

Franke said he wants to peak at this meet this weekend, when it matters the most.

“I feel like it’s a disappointment if you don’t peak at the end of the season,” Franke explained. “And since this is the end of my career, I definitely want to go out on top and swim my best time.”

Franke said it doesn’t matter if the relays qualified as automatic or call-up times because the Dragons swim in such an elite region.

“It’s still the same to us,” he said. “Our call up time is actually faster than some people that automatically qualified, so I think of it as we just have to catch them.”

Hinson said competing in such a strong region is an advantage to the Dragons.

“Our region is unique because it has some of the fastest times in the state,” Hinson said. “A lot of people we swim against at regional are the ones we’re going to see again at State. So we have a unique advantage that we get to see a lot of our competition twice and know what to expect.”

Scroggins said after the nerve-racking regional competition, she’s excited to see how her swimmers celebrate as three of them culminate their careers and the three others experience the State meet, compete at a high level and gain experience for the future.

“State is more of a celebration,” Scroggins said. “We still have a few things we want to accomplish as far as school records and medals, but other than that it’s ‘icing on the cake.’”

Semifinals begin Friday at 10 a.m., with finals getting underway Saturday at 9:30 a.m.