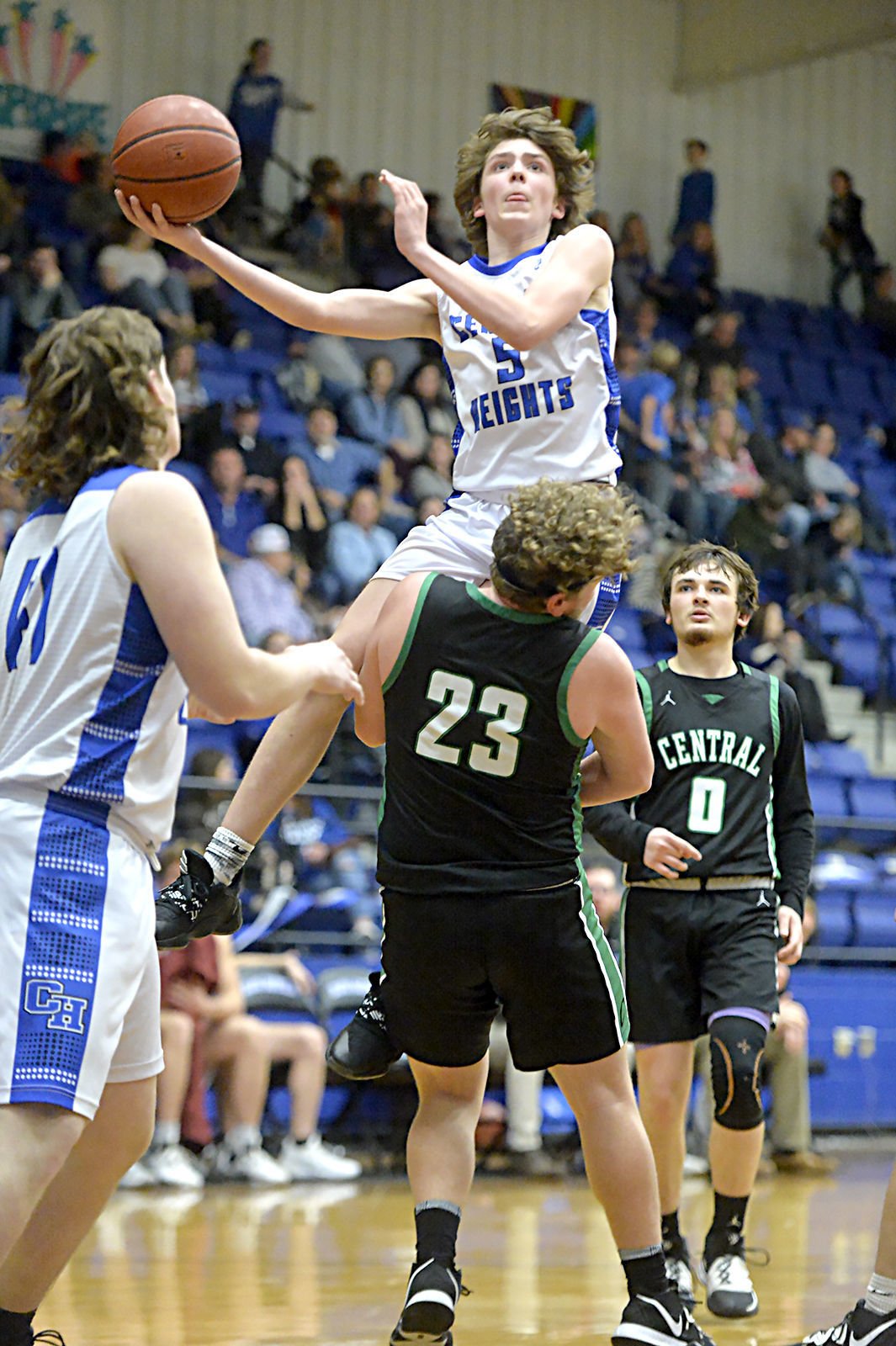 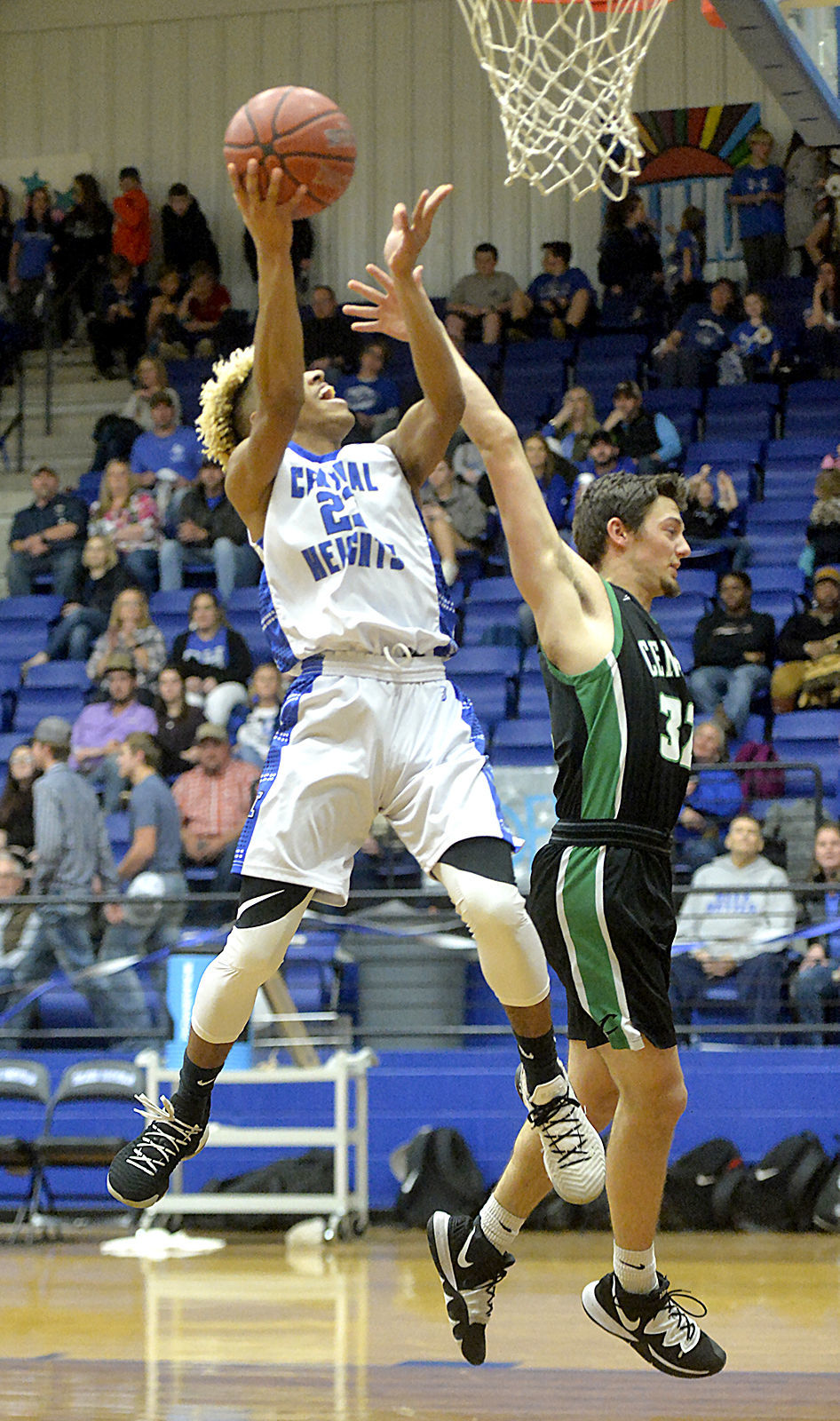 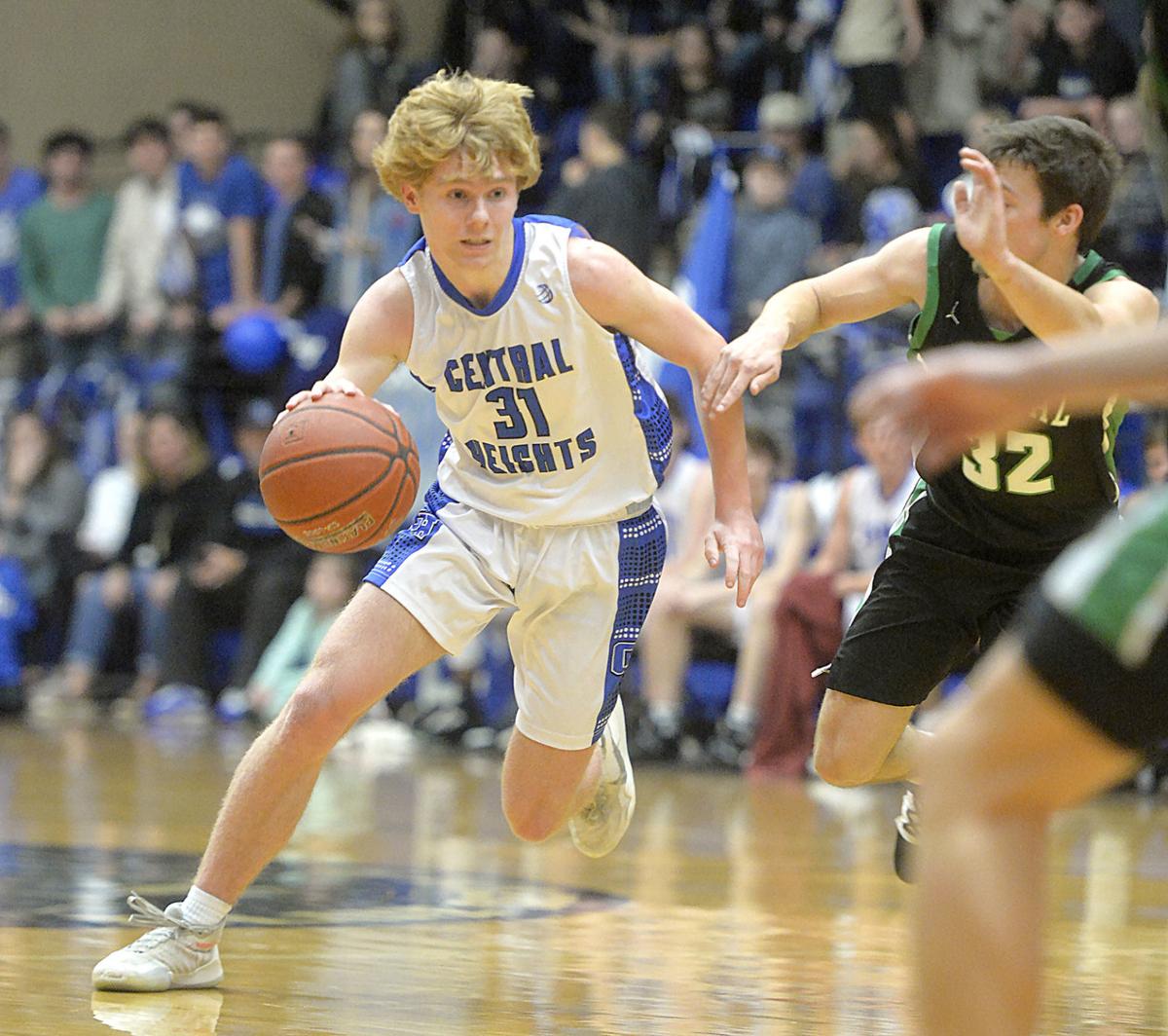 Jackson Flynn drives to the basket during the first quarter. Central Heights dopped the contest, 51-47, to Central on Friday night in Garrison. 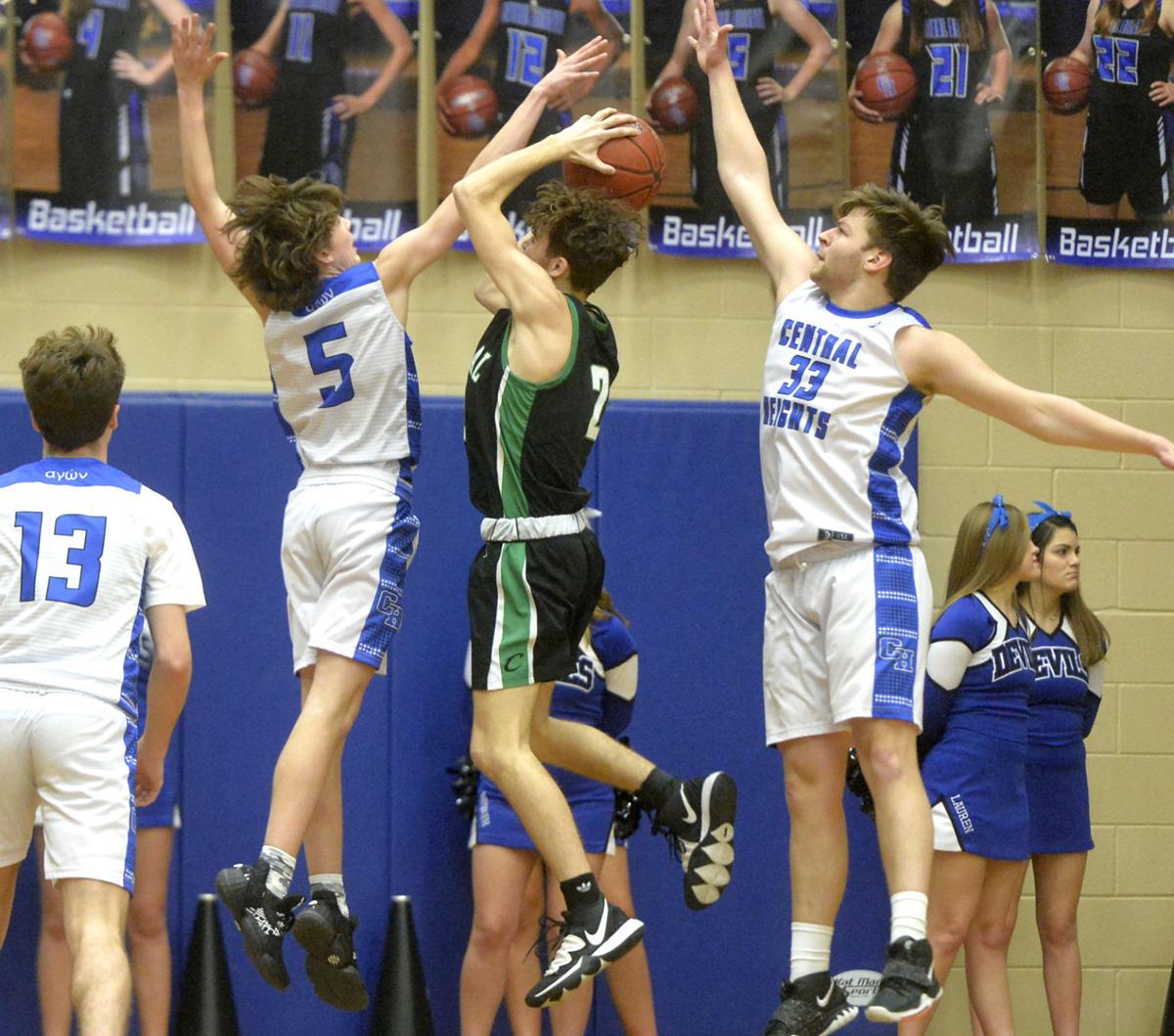 Preston Watson (5) and Drew Heibert (33) go up for a block in the second quarter of their matchup with Central. The Blue Devils lost the contest 51-47 Friday night in Central Heights. 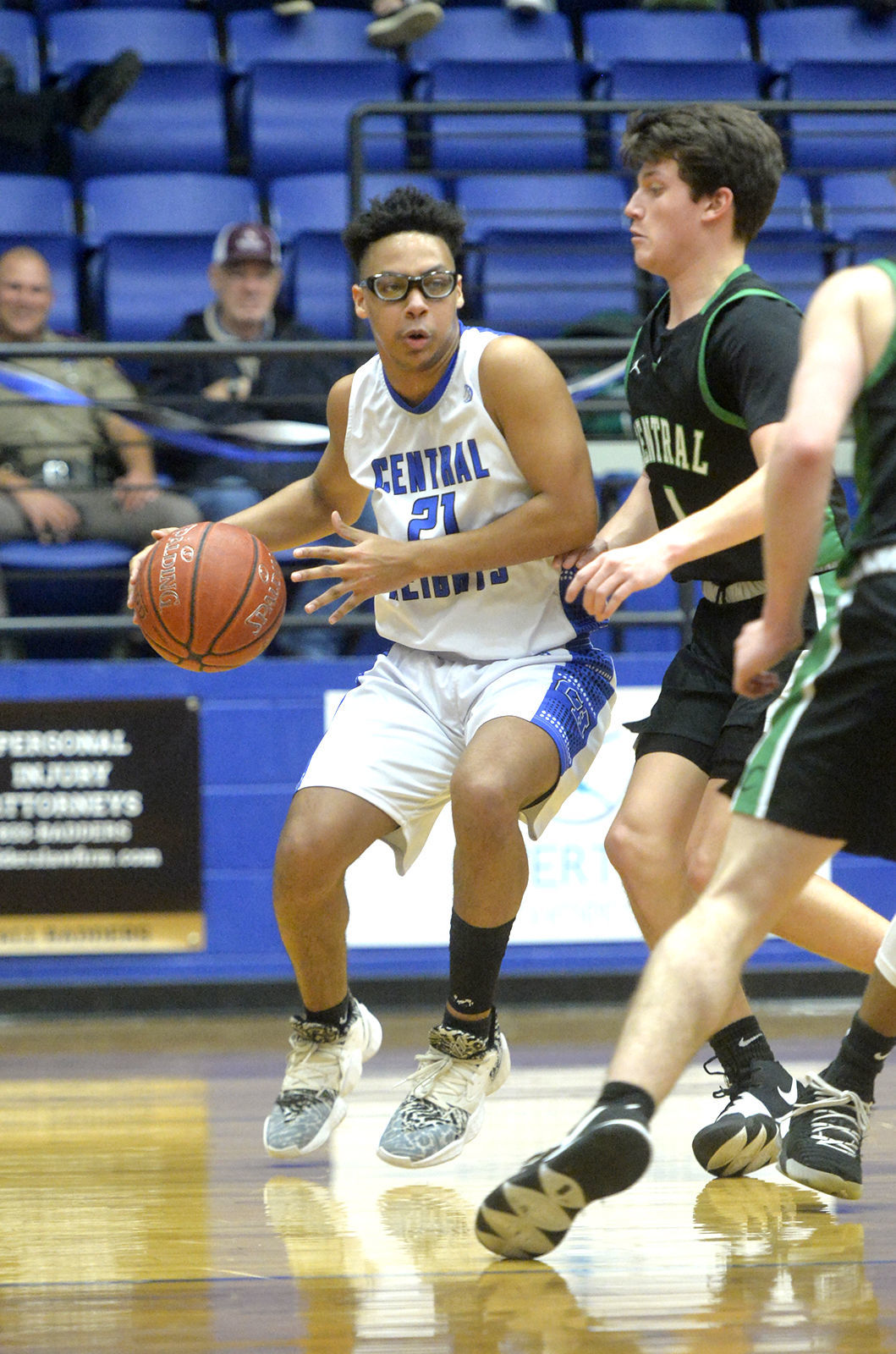 Jackson Flynn drives to the basket during the first quarter. Central Heights dopped the contest, 51-47, to Central on Friday night in Garrison.

Preston Watson (5) and Drew Heibert (33) go up for a block in the second quarter of their matchup with Central. The Blue Devils lost the contest 51-47 Friday night in Central Heights.

After Jackson Flynn went 2-for-2 from the free throw line to make the score 42-39 with 4:47 remaining, the Blue Devils fell behind after two Bulldog three-pointers to tie it, and a combined 3-of-4 from the charity stripe along with a close range basket gave the Bulldogs a 47-42 lead.

Preston Watson sank a layup and converted the two free throws following a foul on a rebound to bring the Blue Devils to within one. However, Central Heights only mustered up one point for the remainder of the game, and a desperation three-pointer to tie the game at the buzzer was blocked.

Despite the Devils starting out strong in the opening period with a 10-2 run in the first five minutes, Central trimmed the deficit to 12-7 heading into the second quarter. The second period, however, was less than ideal for the Blue Devils, only shooting 3-for-12 from the field, while Central knocked down four threes and a perfect trip to the line to take a 21-20 lead into halftime.

After Drew Hiebert split a trip to the free throw line, D.J. Ransom scored five-straight points, followed by a layup from Flynn to trim the deficit to one. Trey Hurrleston and Logan Farrell went back-to-back for five points to tie the game, and Farrell followed up with two-straight threes to give CHHS the lead.

The Blue Devils had their hands full with a stingy Bulldog offense, led by Central’s Shelfo, who made six threes and a game-high 20 points. As a team, the Bulldogs had 10 three-pointers in the game.

The Blue Devils were led by Ferrell with 12 points, followed by Ransom with 10. Watson and Hiebert chipped in five points each, while Will Grigsby and Flynn added four points to the tally.

Central Heights will be back in action when they travel to square off against Corrigan-Camden at 7 p.m. Tuesday in Corrigan.